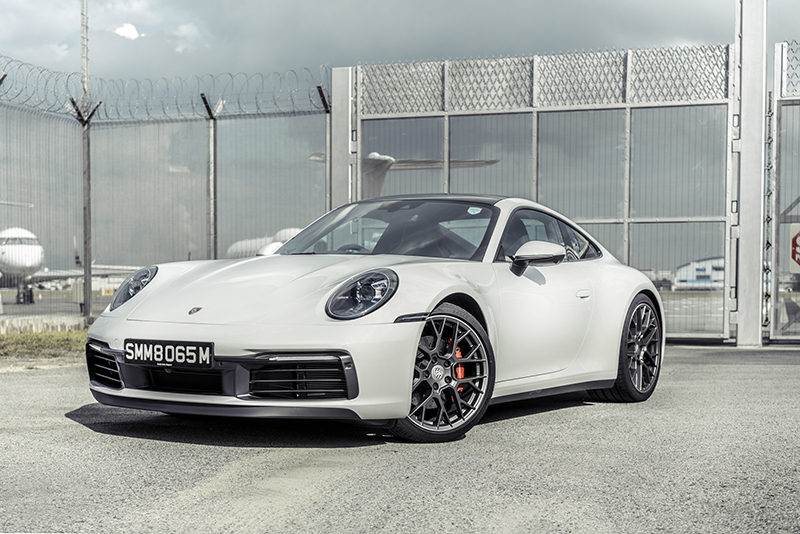 It’s the car every man (and boy) hopes to own one day. The Porsche 911, now in its 8th generation (992) is still an awesome package of thrills and frills. Yes, you do get many cool features that make this a great do-all sports car.

But let’s assess the way it looks first. It has strong hints of the model (991) it replaces, although subtle changes to the bumper and (add-on) the LED matrix headlamps help to refresh the front-end a bit. The main changes are at the rear though. 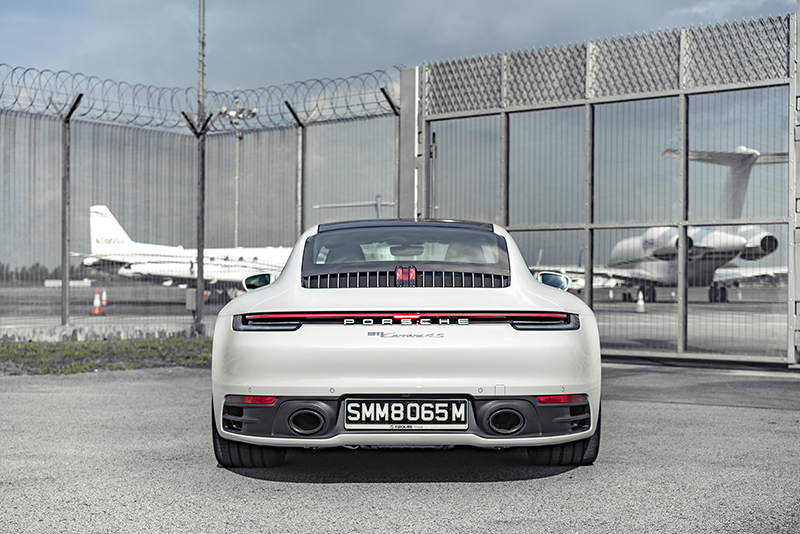 A long seamless light bar stretches from one end of the tail lamp to the other, and the dual exhausts pipes exit from a black bumper housing. In the past, only C4s had the wide-body styling, but the rear wide haunches are standard on all 992 models now. 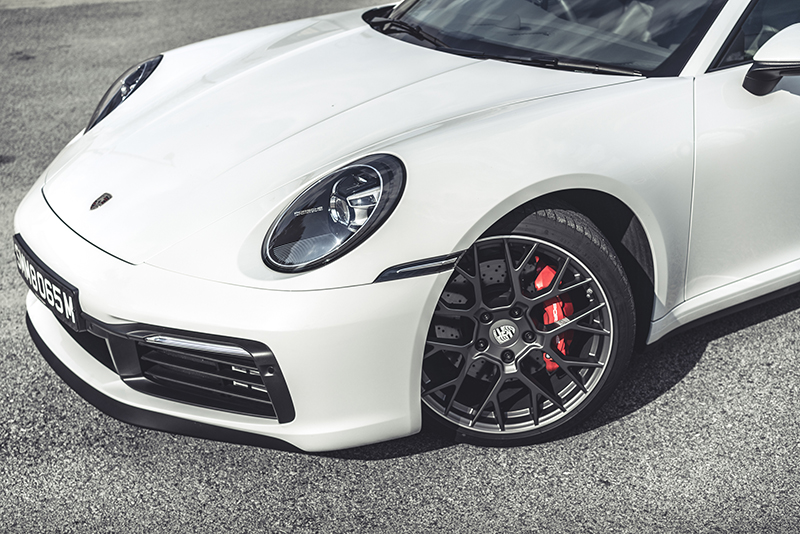 The wheels are also staggered, with the front getting 20-inch rollers, and the rear an inch larger at 21-inch. 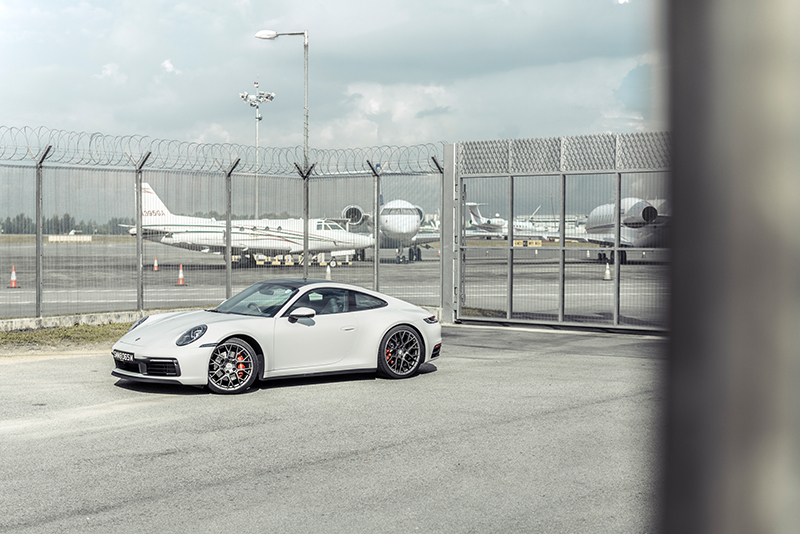 It’s a really sexy car to look at, and while it is a far cry from the classic simplicity of an older generation air-cooled 911, the new one does represent a new car for a new age - tech-savvy, efficient and suave in a modern way. 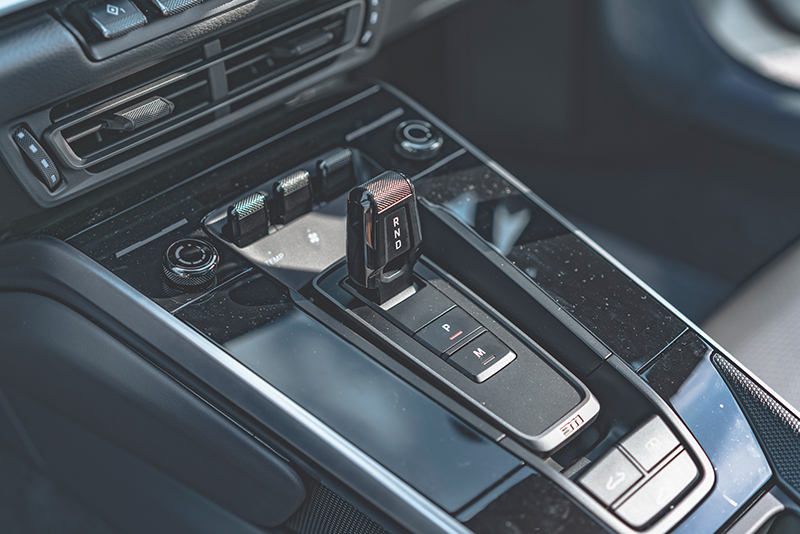 Get seated inside and you’ll find that there is no longer a gearshift. In its place, a small lever the size of a regular car keychain that will allow you to swap between Drive, Reverse or Neutral. Forward cogs ( featuring a new eight-speed PDK gearbox) are only switchable via the paddle shifter on the steering wheel. 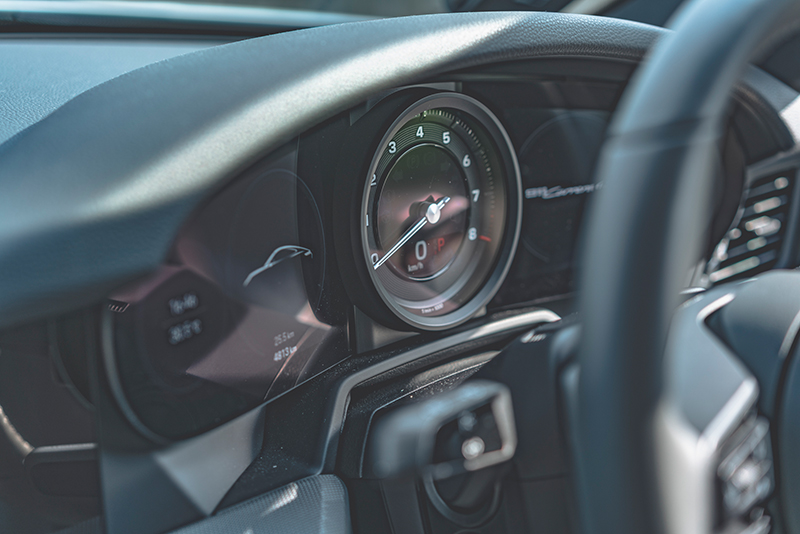 The front instrumentation now features five round dials that hark back to 911s of old. The dials then were laid out in a straight flat alignment, while these new ones are organised to angle towards the driver. But the info can be switched around and customised to display according to your preference. The center dash also features some new and sleek switchgear that feels pretty cool to the touch. 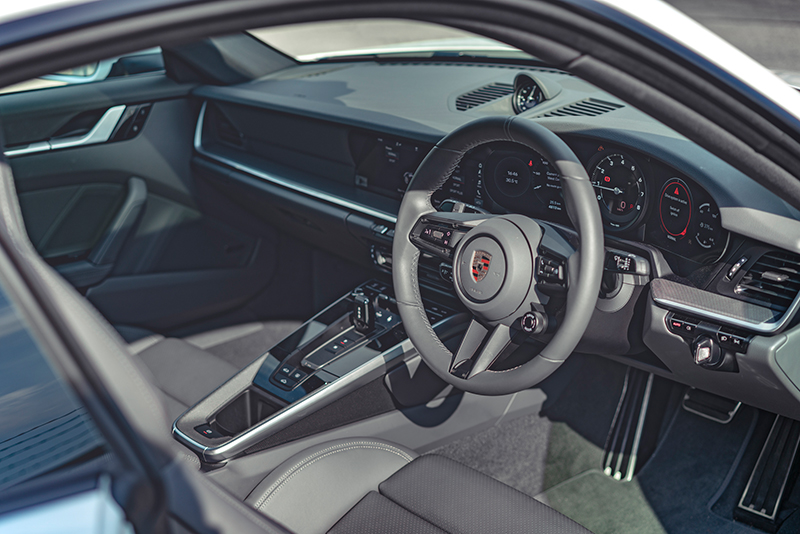 The GT Sports steering wheel was a little too small for my liking - it was blocking much of the cool instrumentation in front of me. I think I’d be happy with the standard one, thank you. One nice touch though was the Bordeaux Red seat belts that this car came opted with. Other than that, it’s pretty much standard Porsche quality all round with the seats providing more than ample comfort for long drives. 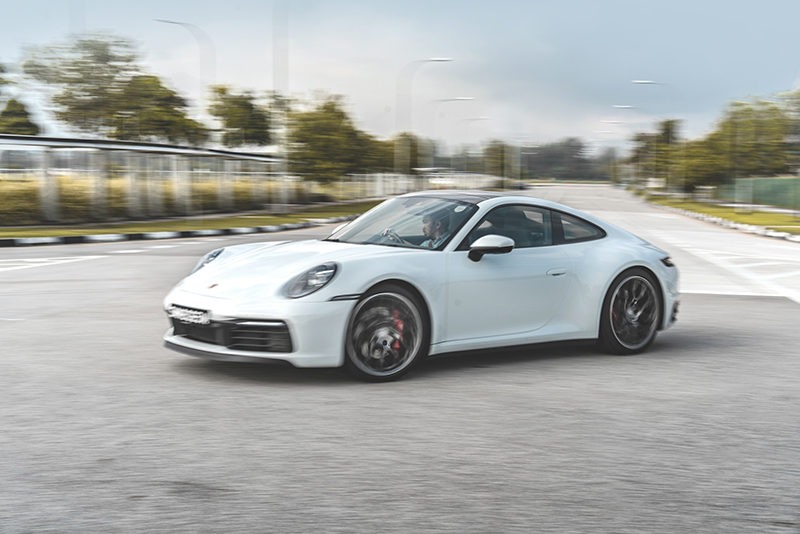 Speaking of drives, the 911 C4S we’re in pushes out a strong 444 bhp and 530 Nm of torque. This comes from a turbocharged 3.0-litre unit that feels a little relaxed at the low end but gets really quick from the mid-range onwards. Maybe it’s due to a slight turbo lag, or perhaps a lack of sensitivity in the throttle at low revs, but it does go away once you put in Sport - which perhaps reveals some electric accelerator tuning done to differentiate the various modes. 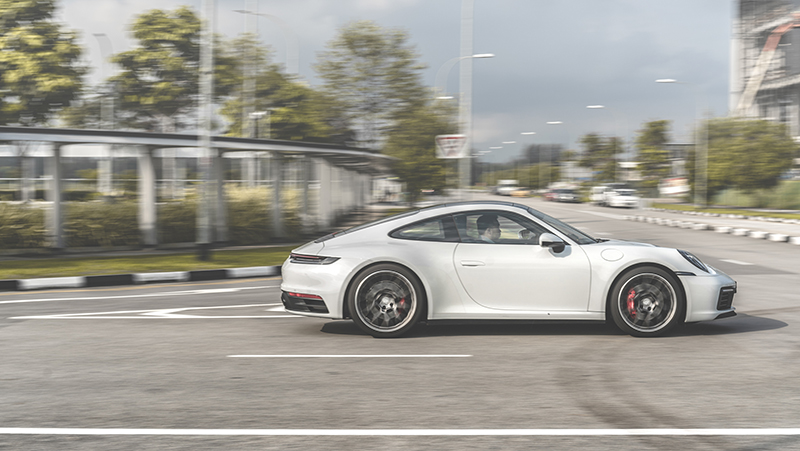 But get it going, and the new 911 will really get going - it’s so darn fast (0-100 km/h in 3.6 seconds) and sounds great when given the beans. It’s easy to handle and confidence-inspiring too, thanks to years of engineering and tuning to the steering and suspension. The 911 can be a comfy cruiser but can also dish out a good serving of agility when called upon. Whack it hard in the corners and you’ll run out of road (and guts) really quickly. 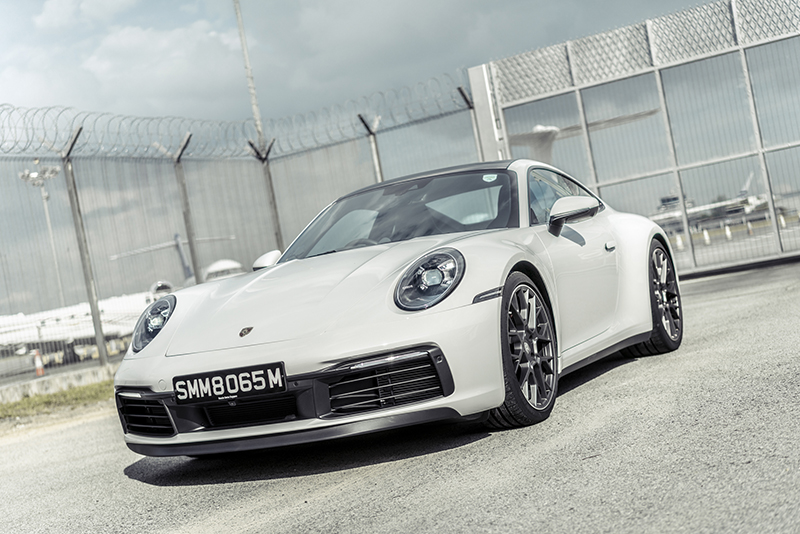 The 911 never feels lacking in responsiveness on the road. That is until you get in a Cayman or a GT3. But let’s not go into that, as those cars are meant to satiate a stronger need for performance. 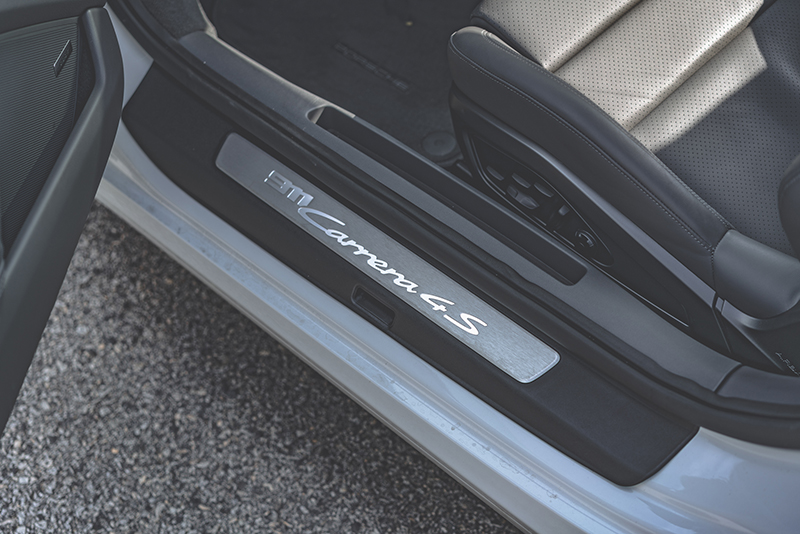 The ‘regular’ 911 needs to do more than go fast, it needs to be usable too. The latest 911 remains a sweet all-round sports car. I’m not even sure the C4 with the four-wheel drive is necessary. I’m of the notion that 911s should be rear-wheel driven, perhaps for tradition, or maybe just because - but we’ll only be sure after we get behind the wheel of the C2/S. 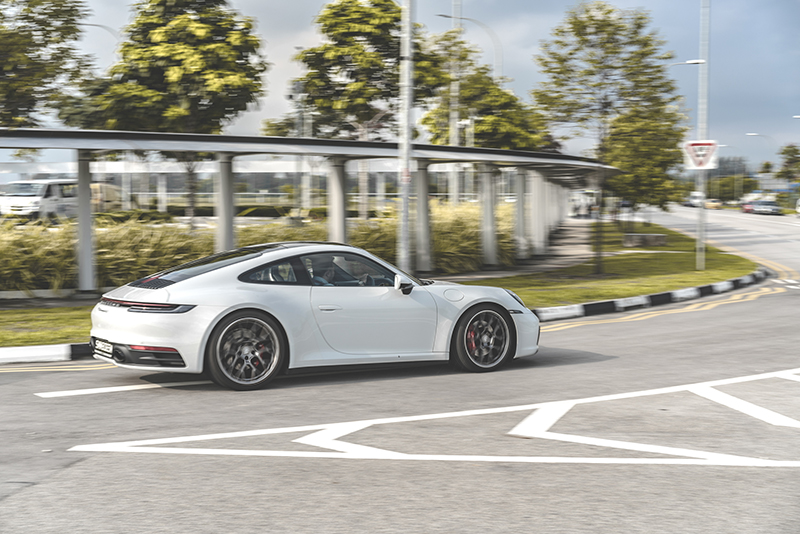 So for now, despite having grown up a little, we’re happy to report that the C4S manages to deliver much of what Porsche needs it to be. It does come with a rather large price tag (in the region of $580K, depending on COE), but no one ever said that Porsches were cheap. But yes, you do get what you pay for.