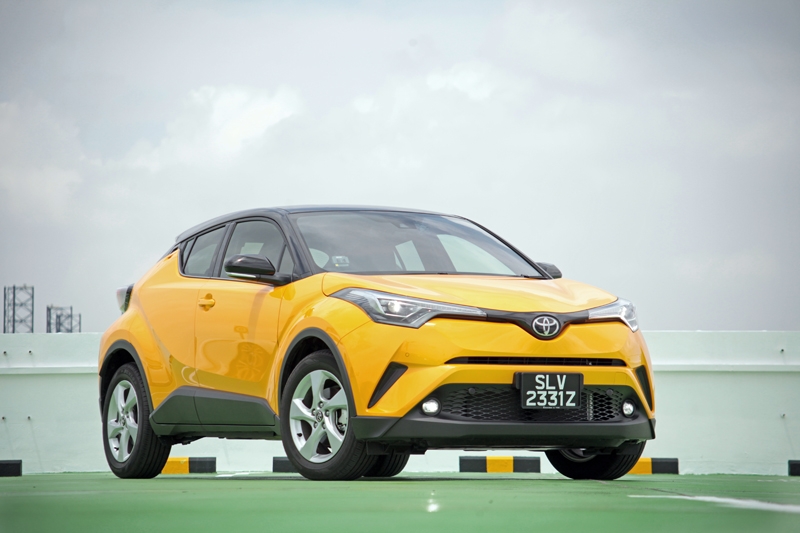 Toyota decided to go down the less boring route, and this is the result

Toyota. Never the first brand you’ll think of when it comes to exciting cars; well maybe more than a decade ago, with the likes of the Supra, MR2 and Celica. But up till recently, we’re all fed with only family-oriented cars by Toyota. There is the exception of the 86; come to think of it, if Subaru wasn’t in the picture the 86 might not even make it to production. “What, we’re not sharing this model? And I have to bear this all on my own? Then forget it!” A likely scenario in their boardroom…

Realising they need a model to attract the younger and trendy set - thanks to Honda and Nissan who went ahead earlier with their HR-V and Qashqai respectively - which thinks the Vios is not exactly the cool set of wheels they would want to own, this is what Toyota came up with. 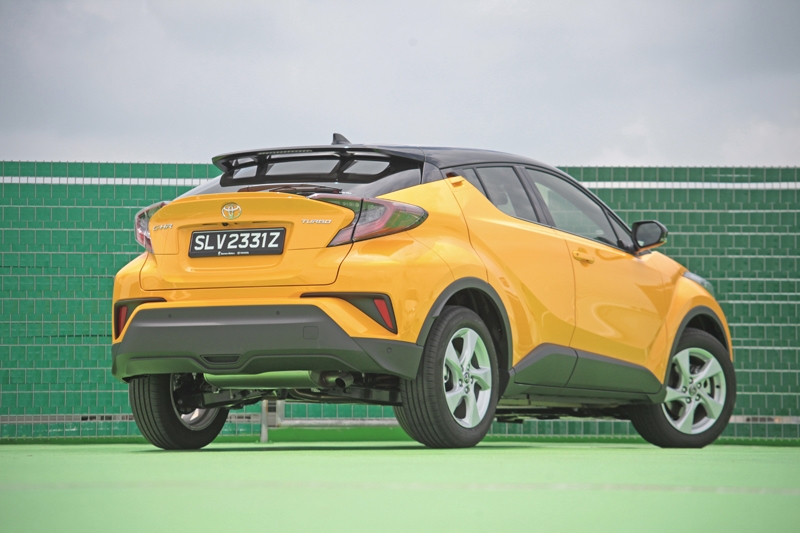 What’s this?
Meet the Toyota C-HR. In this bright shade of yellow, it grabbed attention everywhere it went. Mate that to a body-shell that is highly detailed with creases and lines, plastic addenda for the rugged look, a front bumper that probably took the entire Toyota design team months to agree on and then topped off with a pert rear, Toyota does seem extra adventurous than ever; restrain was probably not exercised, and that’s not a bad thing. 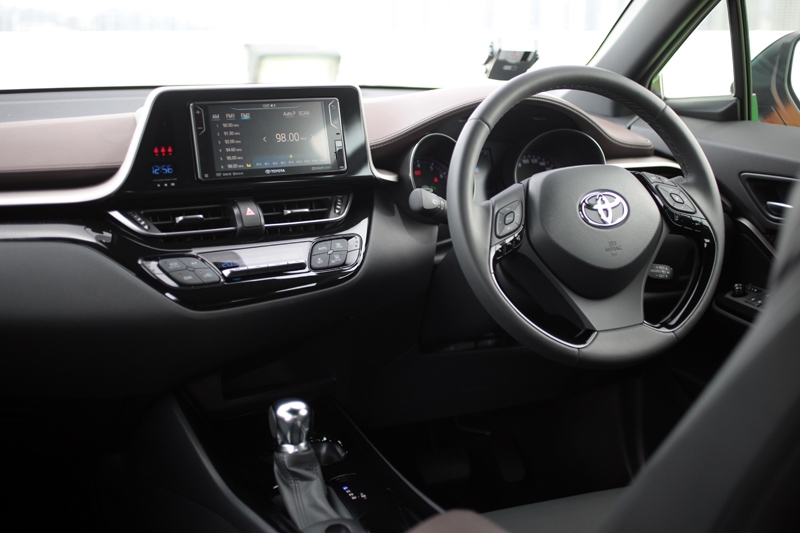 What’s inside?
The C-HR’s cabin is uncluttered and kept to a minimal. The climate control buttons are easy to read and reach from the driver’s seat, the steering wheel is perfectly sized (with buttons for the audio system readily available) and the audio head-unit also doubles up as the park assist monitor; resolution could be better though. 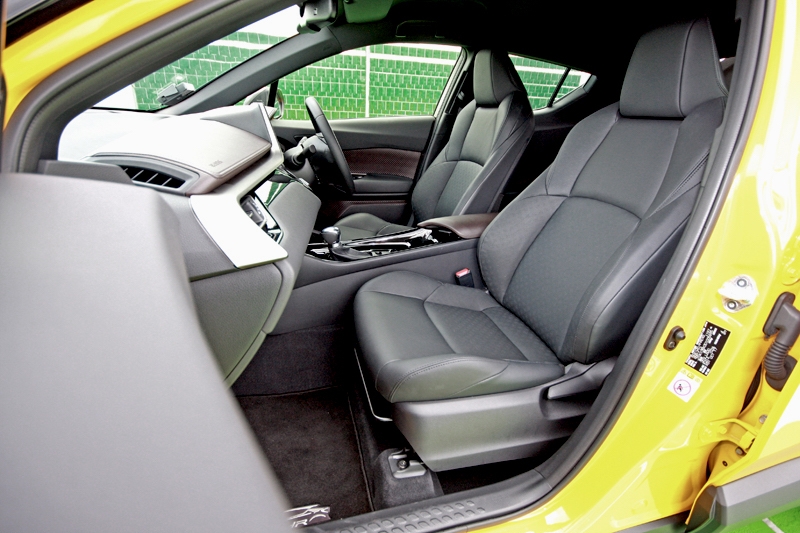 It is a good effort on Toyota’s part to make it less drab in there. Instead of just leaving it simply black, part of the dashboard, door panels and even armrest are finished in maroon to add some contrast. 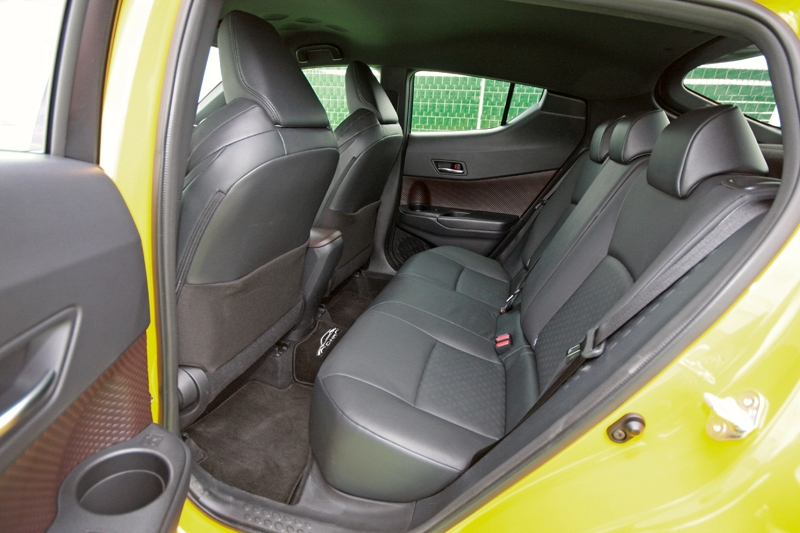 All the seats are sculpted to accommodate the average-sized Asian, with the front two feeling nicely snug. The rear is able to accommodate two and a half adults with just enough legroom; you expect the sloping roofline to compromise headroom, but because the seats are set slightly lower than the segment’s norm, it works out to the C-HR’s advantage in this aspect. However, the rear window does seem smaller than, say, Honda’s HR-V hence passengers back there may need some getting used to; first-timers were consistently complaining about how claustrophobic it could get over longer journeys. 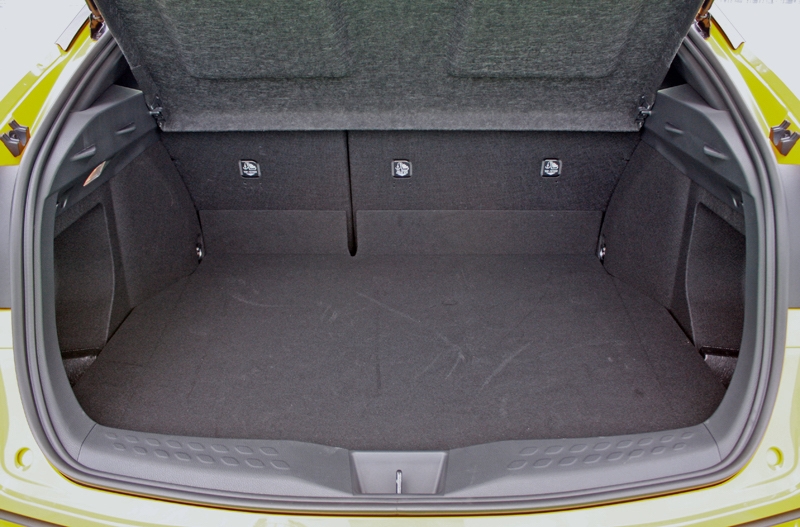 Boot capacity on offer is 377-litres, which is almost similar to the Golf (380-litres); not exactly the biggest in class, but good enough for daily chores. 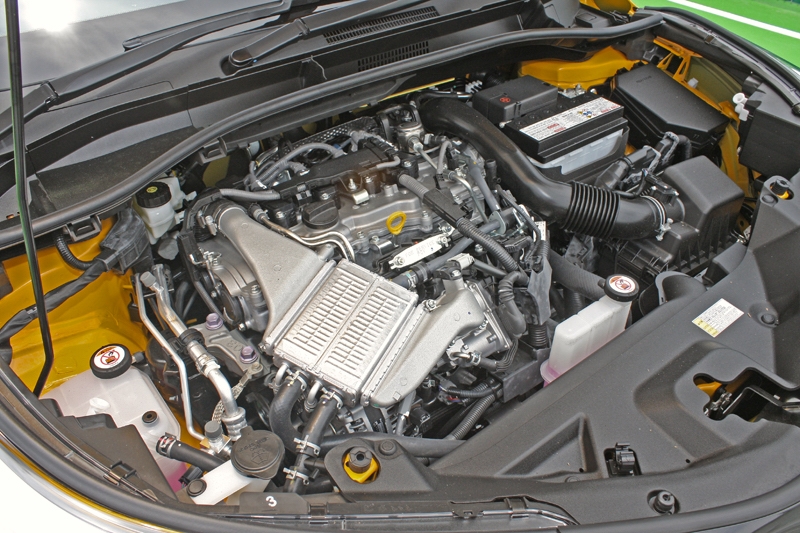 What powers it?
Under the bonnet is a turbocharged 4-cylinder, 1.2-litre powerplant that’s mated to a CVT ‘box with seven virtual ratios. Maximum power output is 114 bhp while torque 185 Nm; this 1.4-tonne front-wheel drive compact crossover does the 0-100 km/h sprint in 10.9 seconds. 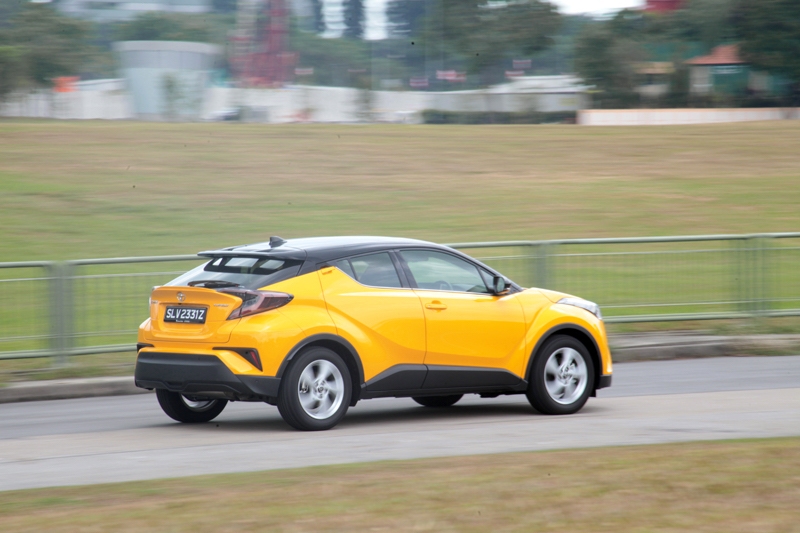 How does it drive?
Look elsewhere if you’re expecting GTI-level burst of acceleration, because what the C-HR offers here instead is efficiency. In other words, it’s sprightly enough to accelerate ahead of traffic when the light turns green, and there is enough oomph to zip from one lane to the other in the CBD. 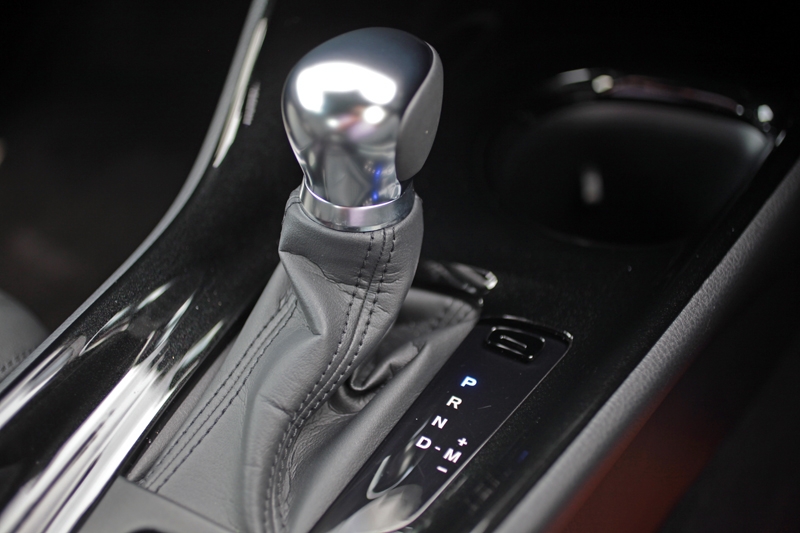 On the expressway, it has all the rights to stay on the fastest lane. The moment a potential tail-gater shows up behind, floor the accelerator and you’re already past the legal speed limit; but one thing to note here is how gruff the engine could get past 4,000 rpm. 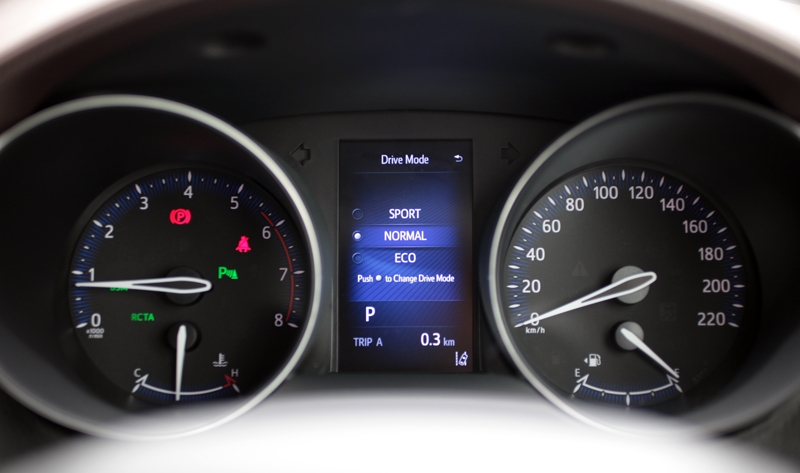 The C-HR also allows you to drive it in three different modes, namely Sport, Normal and Eco. Depending on your mood (or how green you want to be), this adjusts the steering weight, accelerator’s sharpness and CVT’s response. To be honest however, there is no remarkable difference between Sport and Normal. 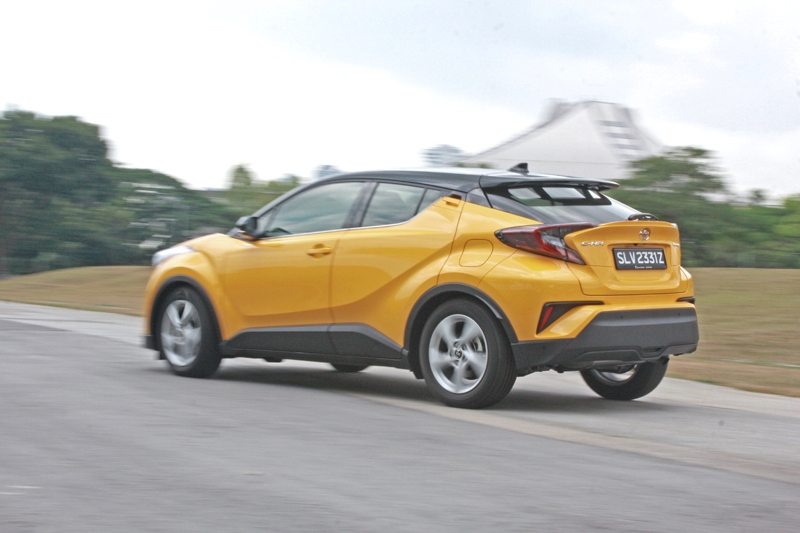 Handling wise, the C-HR definitely felt sportier than you would expect. There is good feedback from the steering wheel when you get a little aggressive along bends, and the suspension felt assuring as a whole. Despite the height, its body movement - as you change directions - is fluid and does leave a smile on your face. I’m sure if better tyres were shod here, it could give any German family hatchback a very hard time. 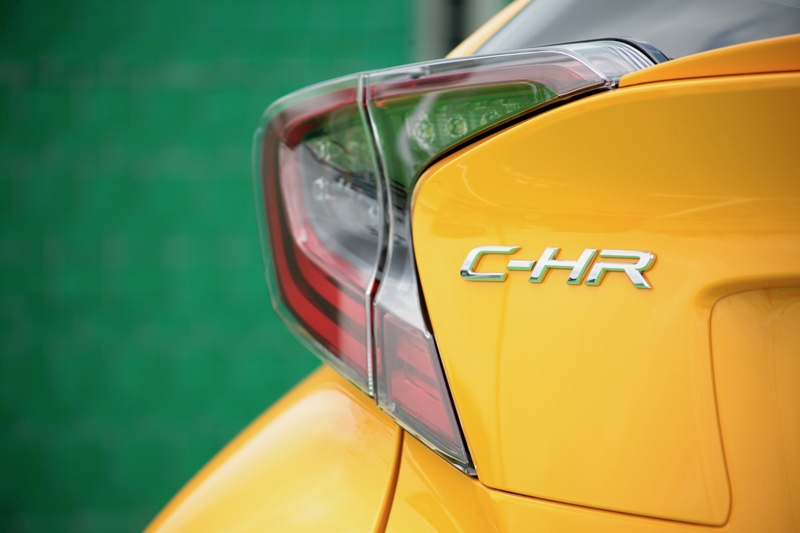 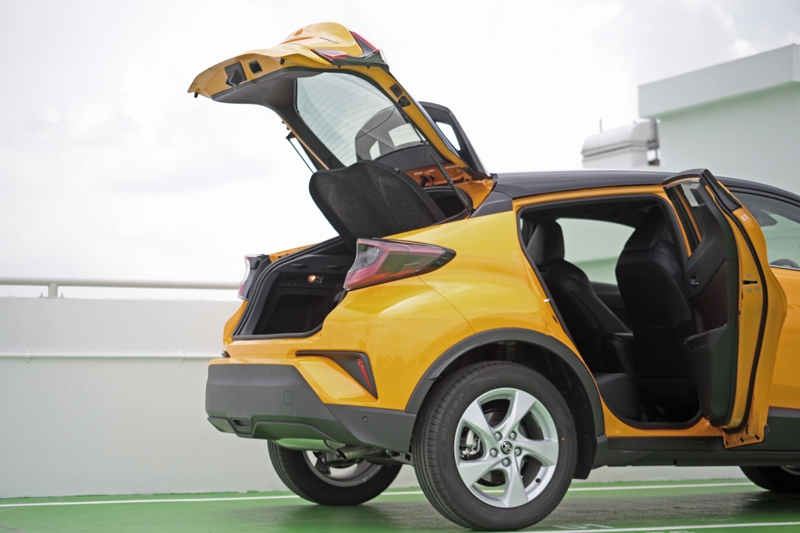 Oh, here’s one secret though: Did you know that the C-HR’s chassis was tuned and tested at the Nurburgring? 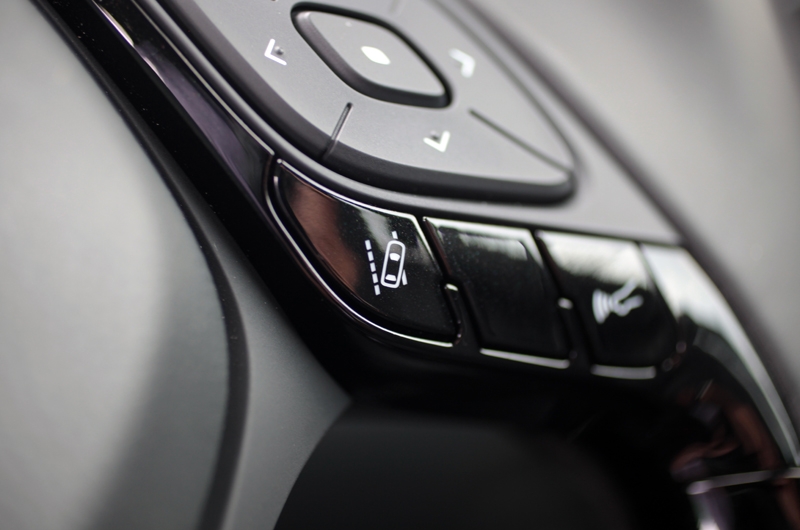 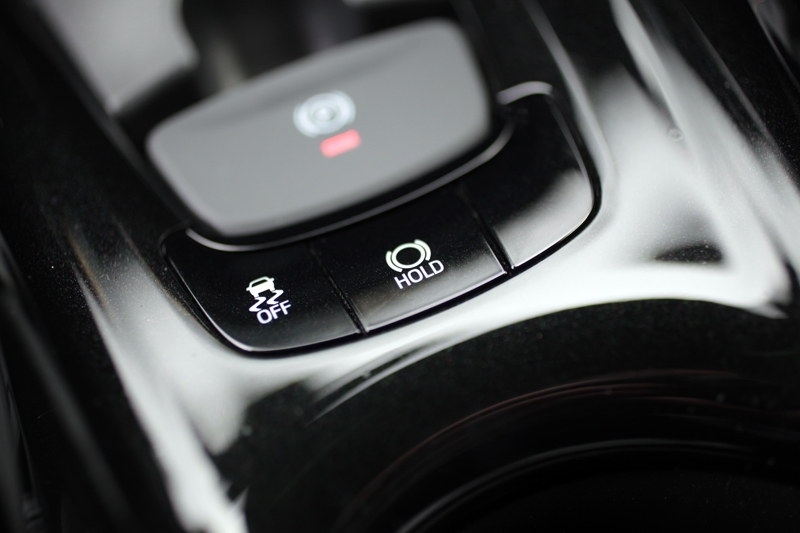