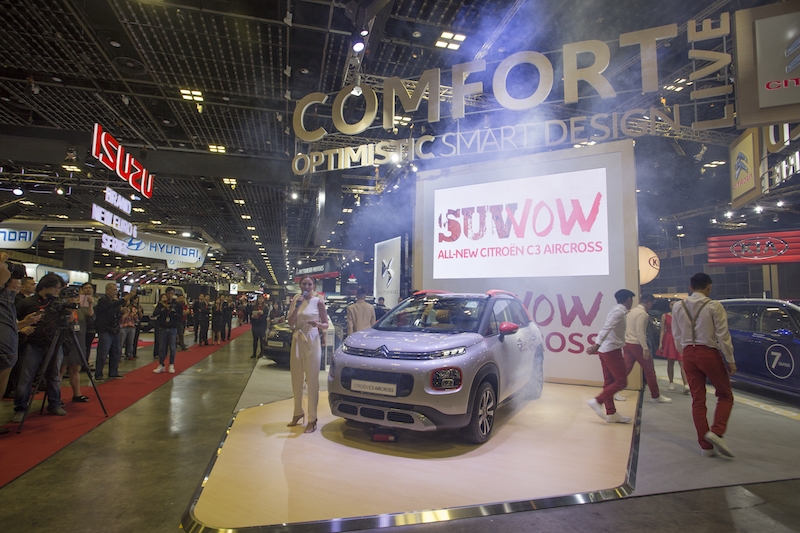 Missed last weekend’s Motorshow? Fret not, we highlight some models that made its debut here

The Singapore Motorshow 2018 greeted over 55,000 visitors at the Suntec Convention and Exhibition Centre between 11th to 14th January 2018. Organised by the Motor Traders Association of Singapore (MTA), visitors were treated to a display of more than 170 vehicles from 26 automotive brands and not forgetting the staple stunt-driving performances by crowd favourite Russ Swift.

The event also showcased some of the latest driving technologies, such as artificial intelligence (AI) and electric cars. On top of 26 new car launches, visitors to the Singapore Motorshow also had the chance to meet Mediacorp artistes and celebrity DJs during multiple live radio shows that took place over the course of the event.

Some of the cars that made their local debut:

Citroen C3 Aircross This French compact SUV looks adorable in a quirky kinda way. Overheard at the Motorshow however, were comments by show goers who were quick to mention how it seemed to have almost similar lines to MINI’s Countryman. While this will remain a subjective matter, we reckon the younger set who wants a unique turbocharged 1.2-litre SUV will surely fall in love with it immediately. Available now with price starting from SGD$98,999 with COE. 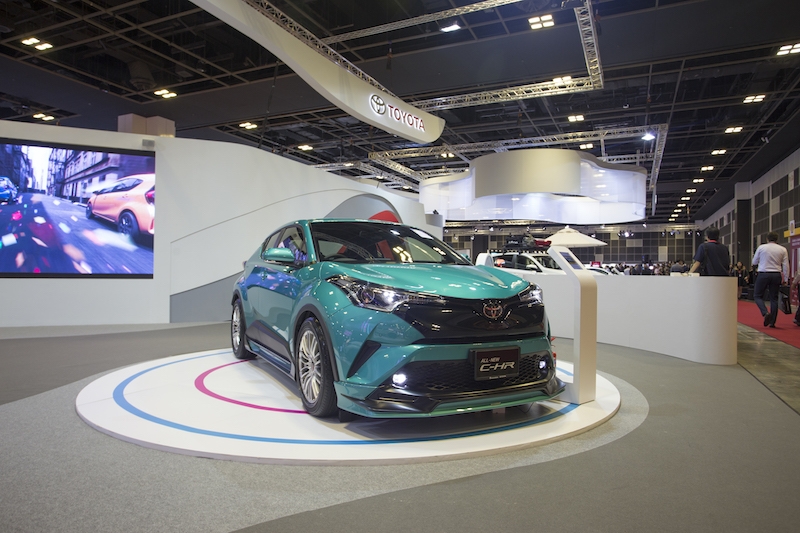 Toyota C-HR Toyota’s local dealer, Borneo Motors, seem a tad late to the party, looking at the number of C-HRs that already are plying our roads thanks largely to parallel-importers. Nevertheless, better late than never; the C-HR is officially brought here only in 1.2-litre turbocharged guise which should be the choice for the younger set who are already in love with its exterior. Price starts at $129,888 with COE - the sample seen here is fitted with a set of TRD styling kit, rims and lowering springs which are optional. 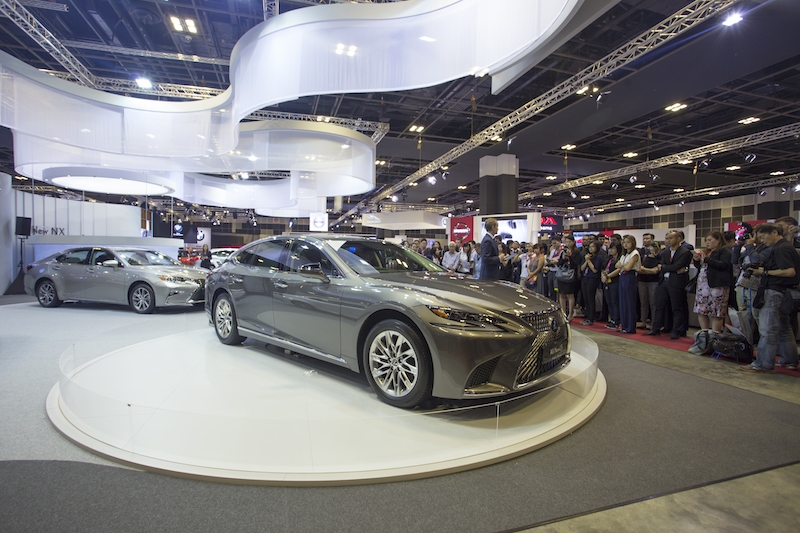 Lexus LS Lexus debuted the all new LS luxury sedan at their stand, attracting attentions from towkays looking for a Japanese option besides the usual 7 Series, A8 and S-Class. For more details on this car, watch this space - it will be officially launched here next month. 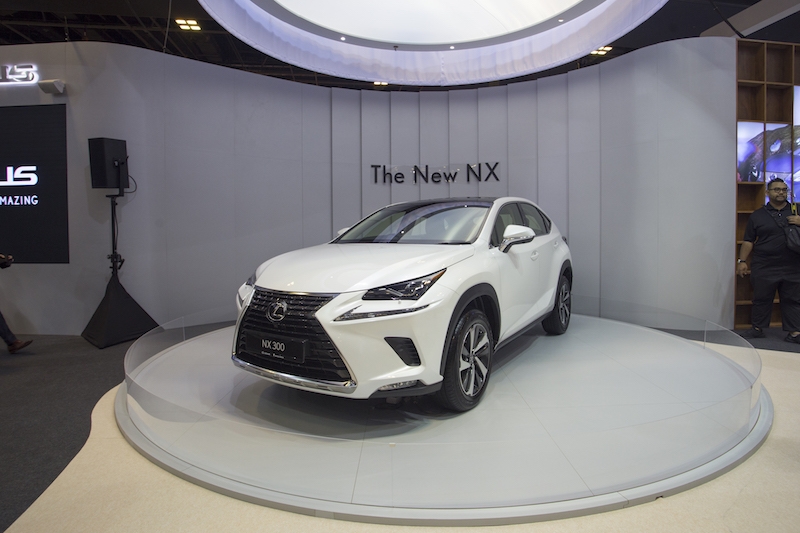 Lexus NX The SUV from the Japanese brand to take on the BMW X3, Audi Q5 and Mercedes-Benz GLC, the NX is now available with some exterior tweaks to keep it relevant. Available in two guises: Turbocharged 2.0-litre NX 200t and hybrid 2.5-litre NX 300h. 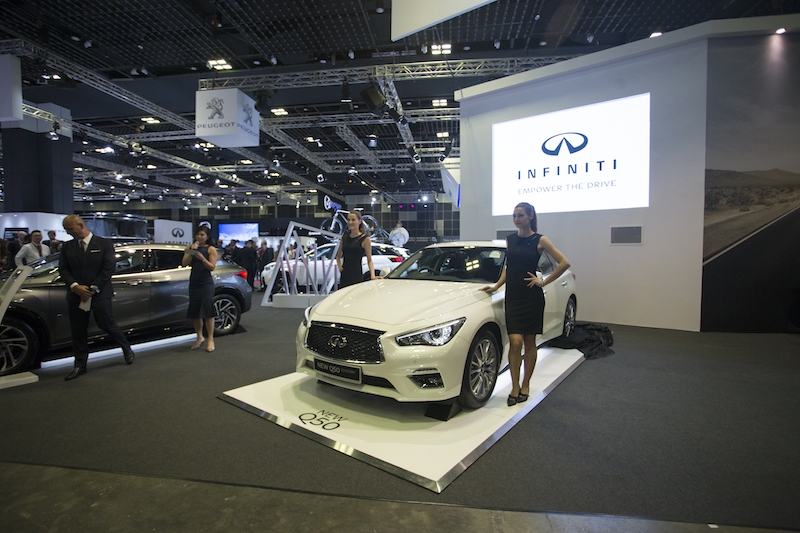 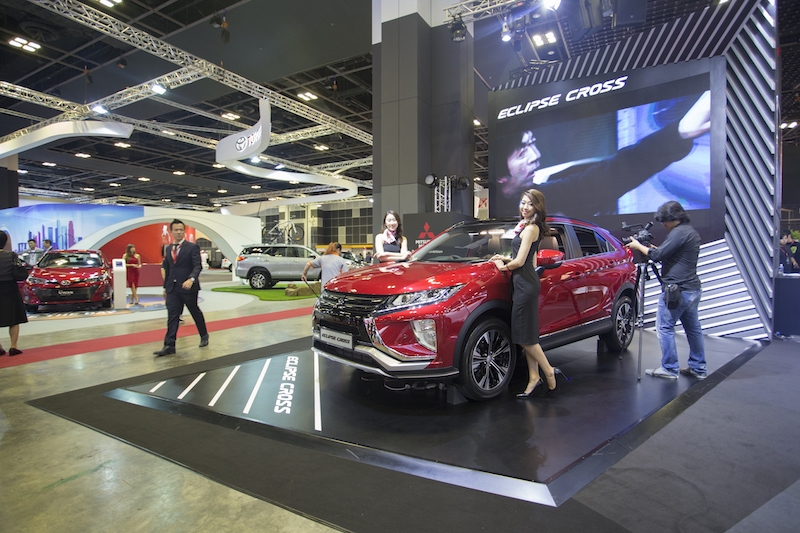 Mitsubishi Eclipse Cross Like UK singer Jamie Lawson’s ‘I Wasn’t Expecting That’, no one expected Mitsubishi to premiere a new model at the Singapore Motorshow 2018. Lets face it, the brand had been rather quiet; so it’s a nice surprise to see this refreshing Eclipse Cross compact SUV. Singaporean consumers are always receptive towards compact crossovers, hence it will be no surprise to see this 161 bhp, turbocharged 1.5-litre Eclipse Cross do well. Price starts from S$119,999 with COE. 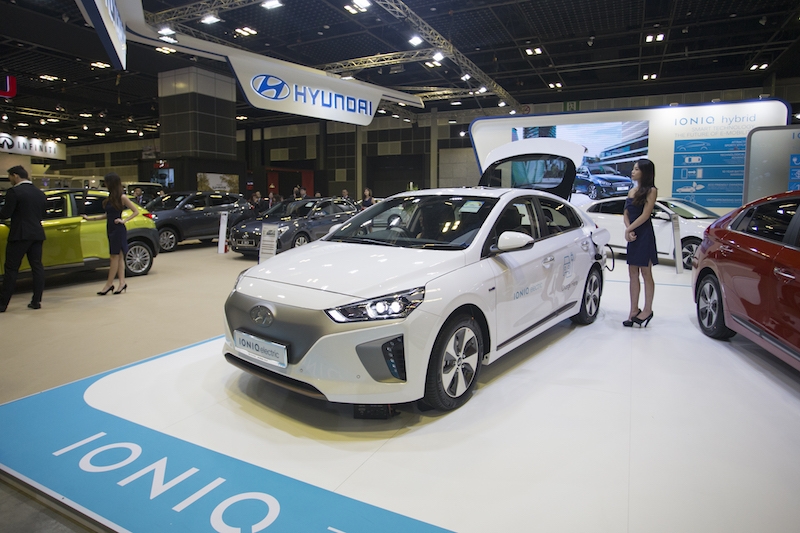 Hyundai Ioniq Electric Hyundai’s hybrid Ioniq proved to be quite a hit among local eco-conscious drivers, also proving that the Koreans are keeping up with time. And now, they’ve brought in the full-electric version. If the price is right, then this will perhaps be a mass electric car this little island will ever see; a range of 280 km after a full charge should sound attractive already. 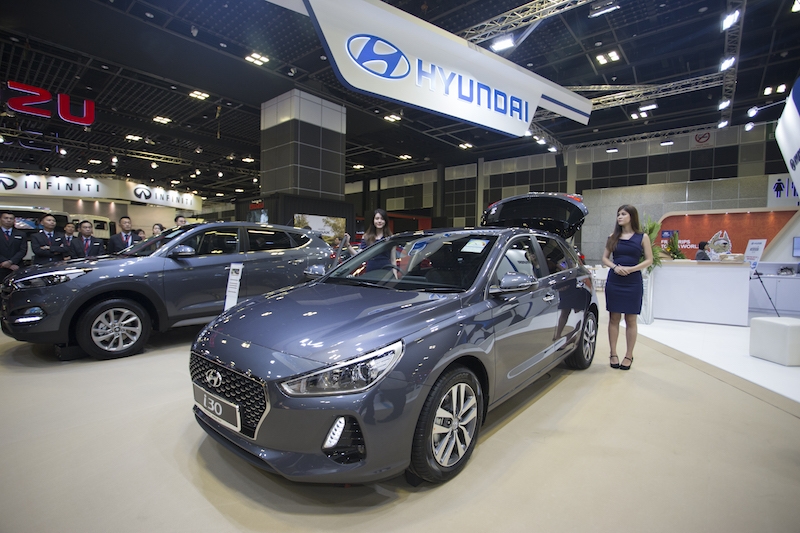 Hyundai i30 The updated i30 quietly made its way here, and what’s interesting here is this family hatchback now comes with a turbocharged 1.4-litre power plant and 7-speed dual-clutch transmission. Output is a respectable (for its class) 138 bhp and 242 Nm. Pair it with a S$96,999 price tag with COE, this should be a hit for drivers wanting both performance and daily practicality; pretty much, you lot who don’t want to fork out Volkswagen Golf money. 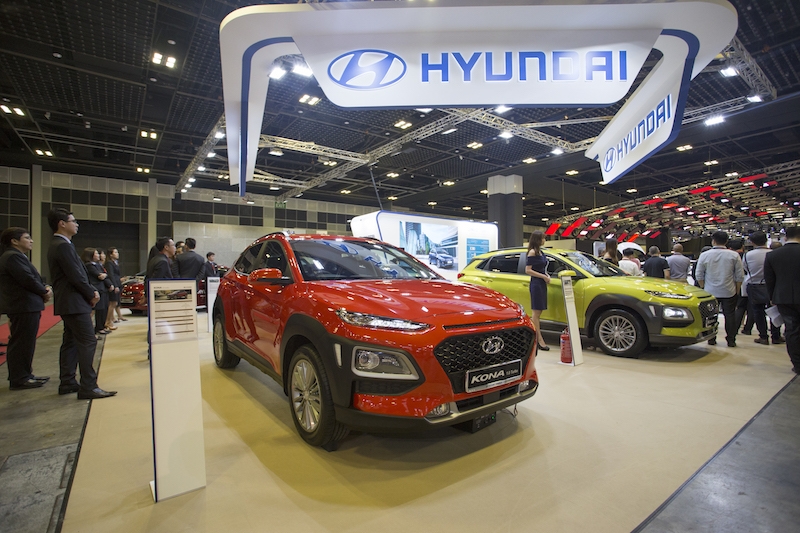 Hyundai Kona A model highly anticipated by fans of compact SUVs, the Kona did not disappoint when the car was showcased in the flesh. Attractively styled and packaged with equally good build quality, it comes in two variants: A 1.0-litre turbocharged producing 118 bhp and a 1.6-litre turbocharged with an even more powerful 174 bhp. The 1.0-litre variant comes with a highly attractive (excuse the repetition of this word) price tag: S$89,999 with COE. Only twist here is it comes only with a manual transmission, which is not exactly a popular choice anymore. The 1.6-litre is available only with an automatic transmission, and is priced at S$131,999with COE. 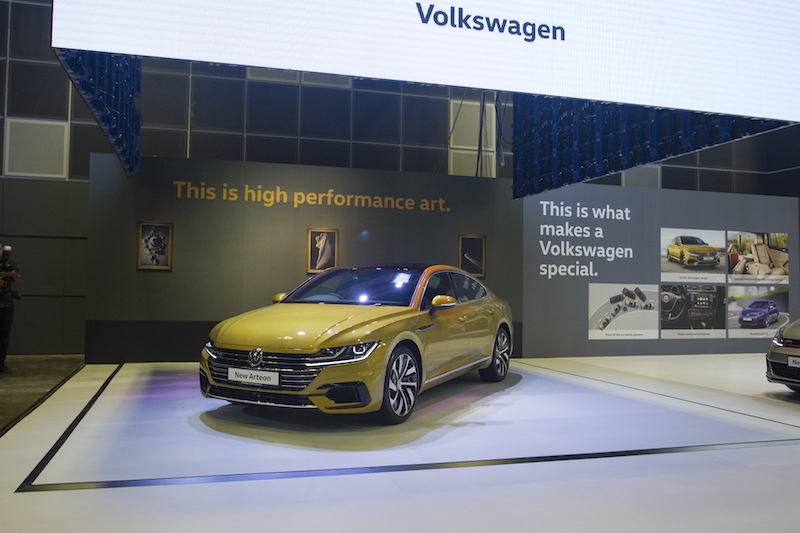 Volkswagen Arteon Launched to members of the media exactly a week before the Singapore Motorshow 2018, the replacement to the previous CC nomenclature is a highly sexy and svelte model here which attracted attention at the Volkswagen booth; especially in this shade of yellow, uniquely called ‘Curcuma Yellow’. Output is 280 bhp and 350 Nm, courtesy of a 2.0-litre turbocharged engine mated to VW’s wet-sump 7-speed DSG. Price is S$220,400 with COE. 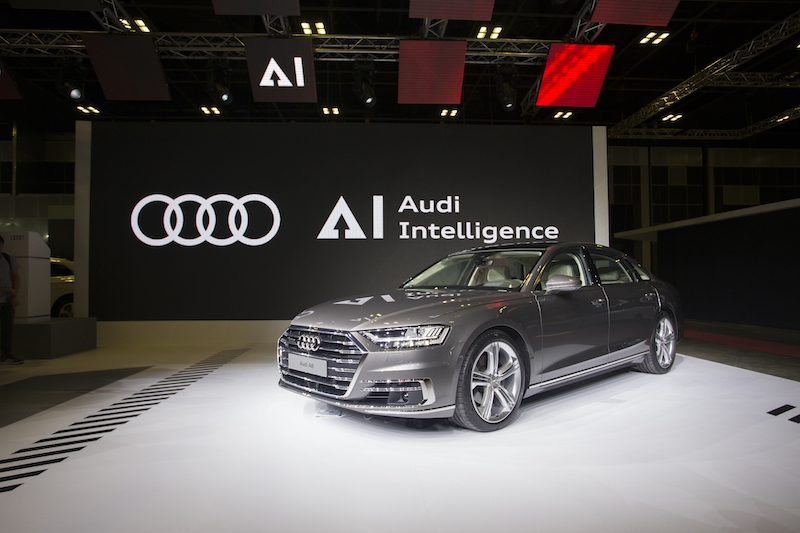 Audi A8 L Into its fourth generation, Audi’s flagship model made its Southeast Asian debut at the Singapore Motorshow. Promoted along with the car is a host of Audi AI (Artificial Intelligence) features: AI Traffic Jam Pilot, AI remote parking pilot, AI remote garage pilot and AI active suspension, to name a few. 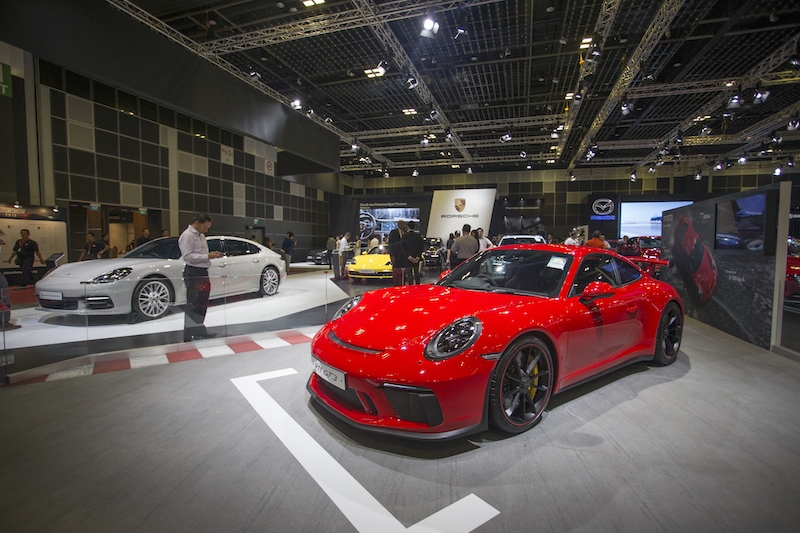 Porsche 911 GT3 For lovers of the brand, the GT3 is perhaps the ultimate model in the temple of 911. At a time where everyone else are obsessed with extracting more power with turbocharging, it is nice to see Porsche still offering a naturally-aspirated 4.0-litre sports car that’s paired to a manual gearbox; the updated 2018 model seen here seem to be shouting, ‘Don’t ever forget me.’ Price starts at about $672,000, without COE. 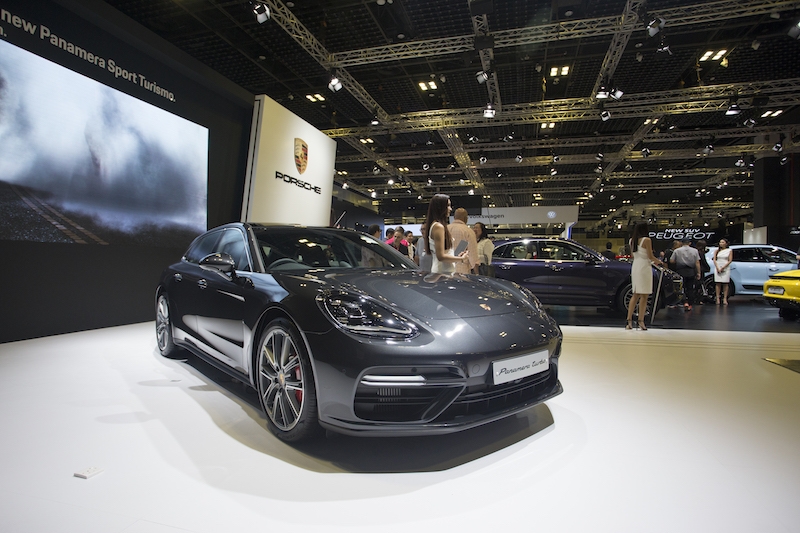 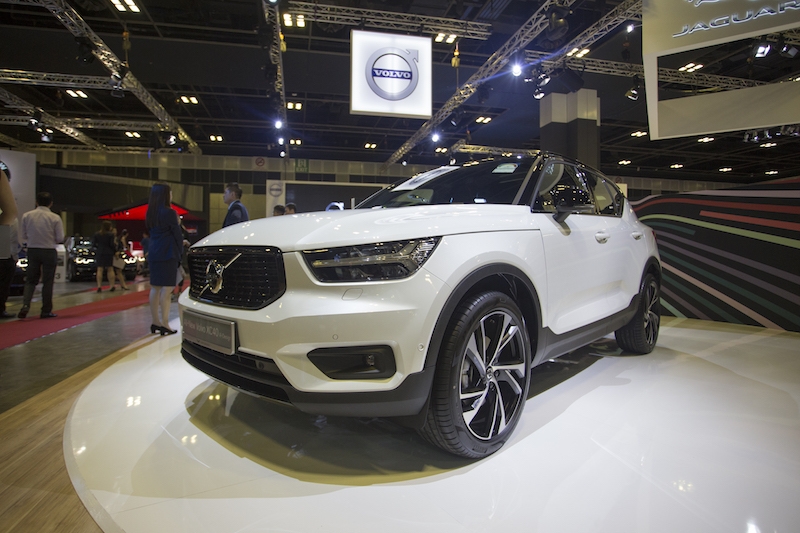 Volvo XC40 Meet Volvo’s competitor to go against the likes of Audi’s Q2, Mercedes-Benz’s GLA and upcoming BMW X2. Power comes courtesy of Volvo’s T5 2.0-litre turbocharged power plant, churning out 250 bhp and 350 Nm (hot-hatch numbers if you were to ask us…). Volvo being Volvo, some special features that could be found in the car includes Oncoming Lane Mitigation and Run-off Road Mitigation. Price starts at $190,000 with COE. 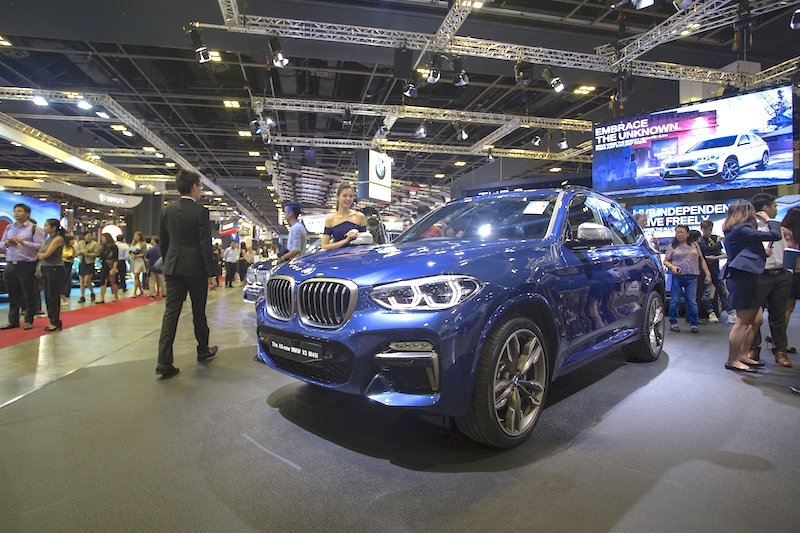 BMW X3 For family men looking for a family SUV to upgrade to, the new X3 should be high on your list. Two variants are available, namely a 2.0-litre turbocharged xDrive30i and a more machismo 3.0-litre turbocharged M40i. The latter caught our attention simply because of its performance-focused engine that offers 360 bhp and 500 Nm of torque, and how it needs only 4.8 seconds to reach 100 km/h from standstill. The handsome M-Sport bodykit ups the aesthetic department, making it look far, err, sportier than the rest of its German counterparts. The X3 xDrive30i comes with a price tag of S$245,888 with COE; no indicative price for the M40i version for now, though.