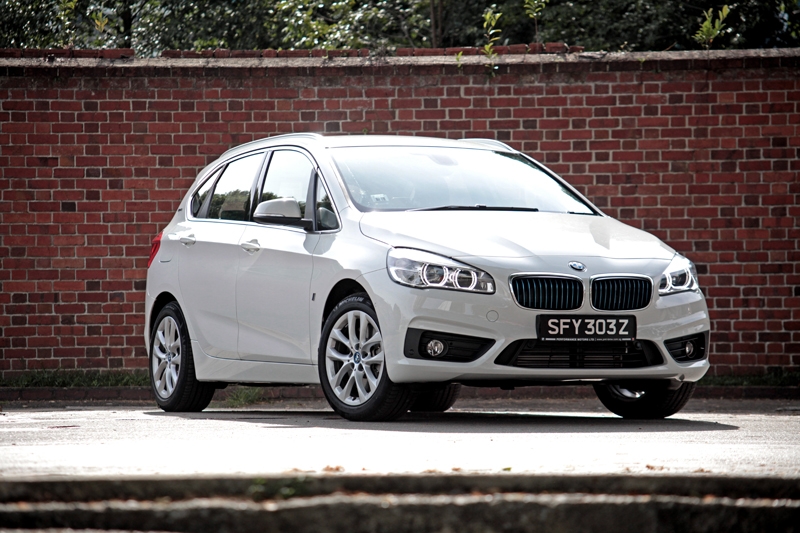 BMW 225XE iPerformance Active Tourer | Would You Like A Piece?

A host of issues, in terms of infrastructure on our island, is still largely in limbo - so why would you still want a sub-$180k plug-in hybrid from BMW?

There are some brands that are trying their best to encourage more Singaporean drivers to take the greener route with affordable hybrid models. Kia has the Niro, Hyundai with their Ioniq; Toyota, no doubt, started it all with the compact Priuc C and and Prius.

Quite recently, BMW went slightly aggressive. They’ve launched a range of plug-in hybrid variants for their popular 3 Series, 5 Series and even 2 Series. 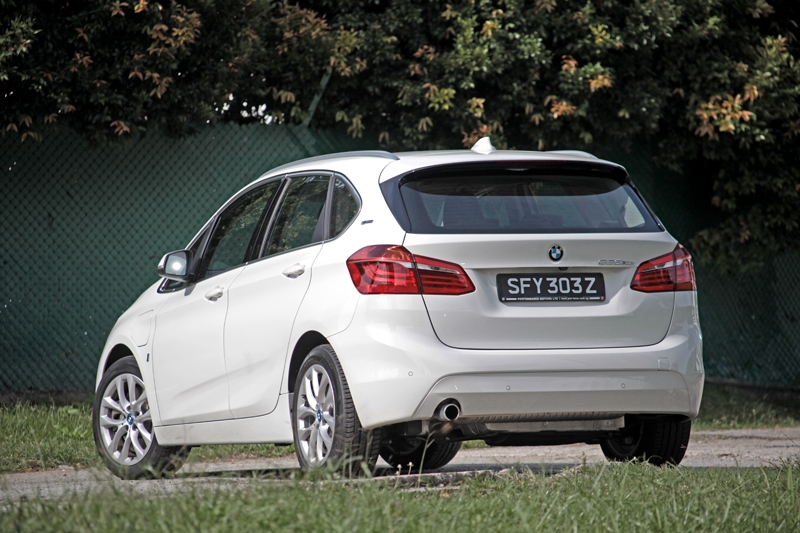 What we have here today is the 225xe iPerformance Active Tourer, which is essentially a ‘greened-up’ 2 Series Active Tourer. And according to BMW, they’re hoping to capture the sort of buyer who wants to enter the world of hybrid motoring, but also wants a premium badge. Essentially if you (a) want a BMW, one that’s not-too-expensive so to speak, and (b) won’t need regular visits to the petrol station, BMW wants you. 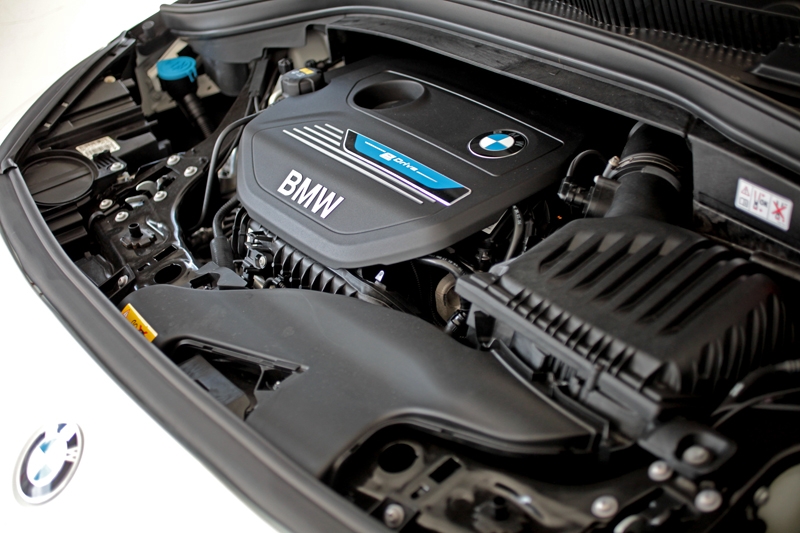 On to the technical bits. Contrary to the ‘regular’ 216i Active Tourer, the 225xe here gets power from a pair of sources — a 3-cylinder, 1.5-litre turbocharged petrol powerplant that whips out 134 bhp, and an electric motor which adds on another 88 bhp. A 7.6 kWh lithium-ion battery pack is placed under the rear passenger bench. 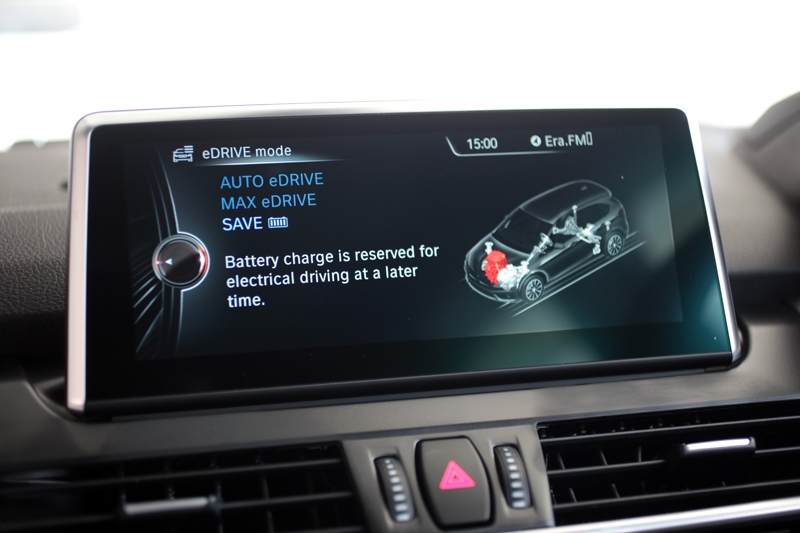 And what do all these mean? You have the flexibility to drive it in either full electric mode (aptly called ‘Max eDrive’) with a range of about 40 km, hybrid mode (called ‘Auto eDrive in this case) where the car will swap between petrol and electric mode whenever it deems fit and lastly ‘Save’ where the car’s system will charge the battery pack as you bumble along dandily from one destination to the other. 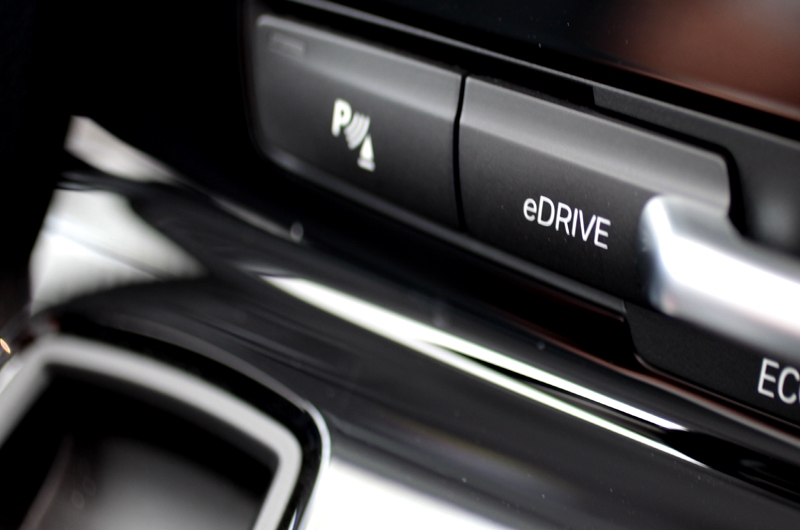 During my weekend with the 225xe, I drove the car half of the time in Max eDrive mode from town to town; the good thing about a hybrid car here is the instant shove of power that kicks in before you could even finish counting down from three to one. It’s quite addictive though seeing how you’re outrunning traffic without much effort on the car’s part; but the downside to this is how quickly you’re sucking the juice out of the car’s battery pack. Go hard with your right foot, be childish and be prepared to see the range cut down significantly by almost half. 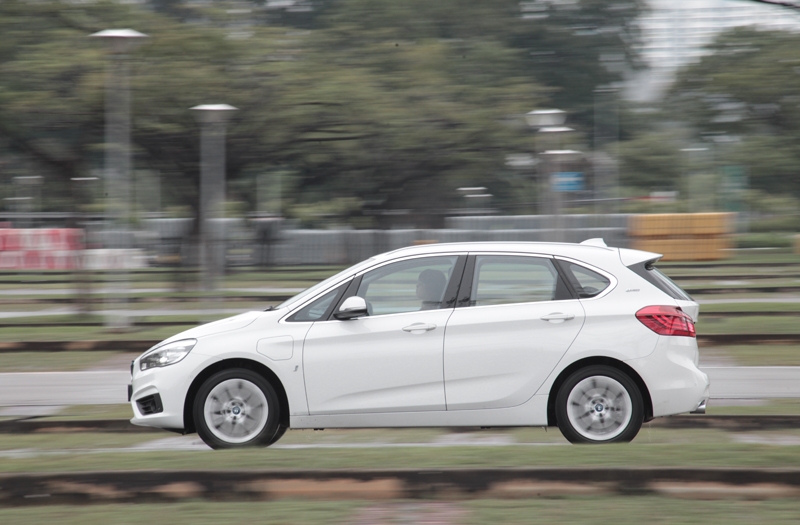 Here’s the thing BMW has gotten perfectly right though: The seamless transition between full electric to petrol mode. When the electric motor has ran out of juice while on the move, the petrol engine takes over without you even realizing it. The only way to notice is by taking a look at the tachometer. It’s the same when the engine’s auto start/stop function is operating; vibration from the engine firing to life is at the barest minimal. Heck, we won’t be surprised if this is one of the car’s USP to win over consumers. 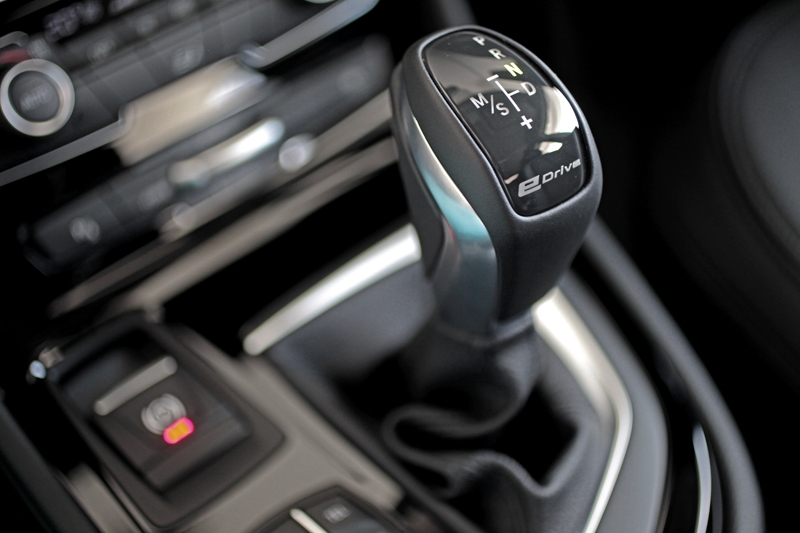 Like every other car, it cannot escape from some little grime. For example, the engine sounds a little gruff near the 5,000 rpm mark. Then, there is a noticeable lag between the time you select the gear via the ‘+/-‘ mode and the time the gear is actually engaged. Lastly, obvious tyre and road noise that point to a cabin that needs better sound insulation.

Handling wise, the 225xe is an easy car to drive; ‘easy’ in this context refers to a nicely weighted helm, predictable handling and at expressway speed, feels planted. The suspension isn’t overly stiff, but it definitely feels a tad firmer than the Golf’s. It can handle spirited driving as well thanks largely to that composed and well-controlled body movement. 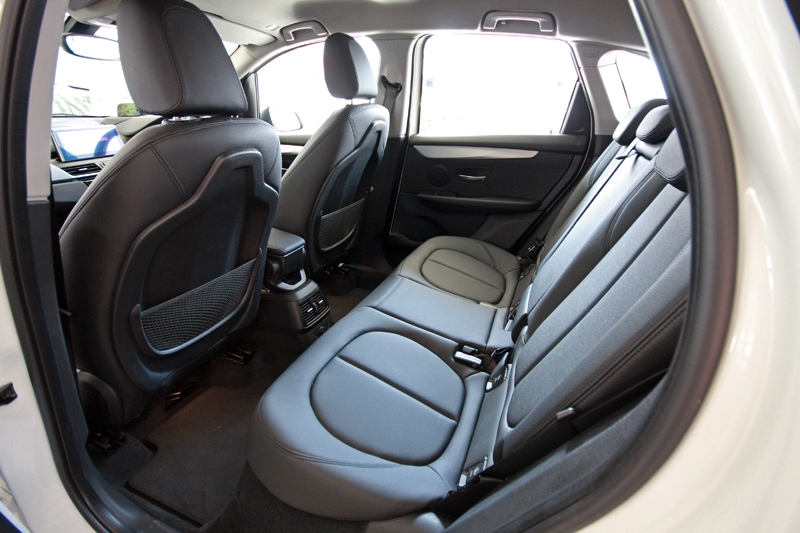 Inside, build quality is your typical BMW, which means you get brilliant fit and finish on top of a comprehensive equipment list. iDrive come standard, along with auxiliary audio input and graphic-rich screen. 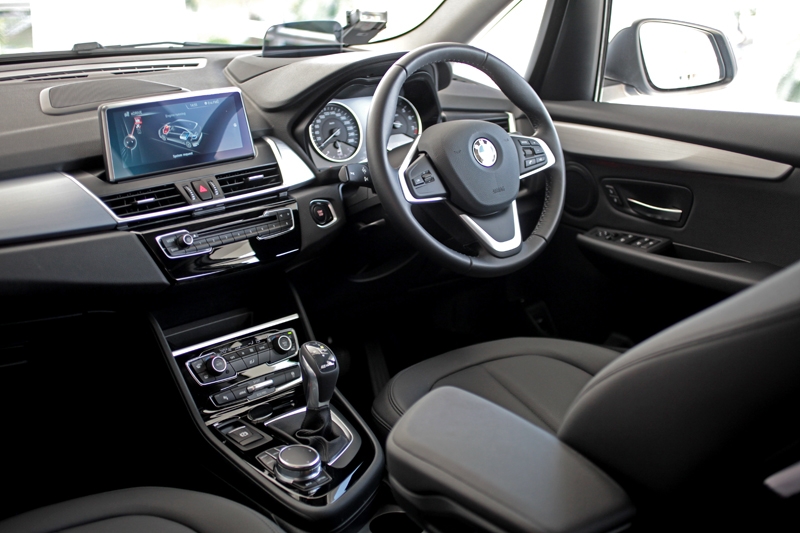 For a car of this portion, the driving position is commendable: Firstly, with the 225xe standing at 1,556 mm tall, it gives a commanding view of the road ahead. Secondly, the driver’s seat is well crafted, providing a good amount of lumbar support. Thirdly, the well-sized leather wrapped steering wheel is nice to hold as well; talk about high quality. Audio and Bluetooth mobile phone controls ensures you do not get distracted while driving. 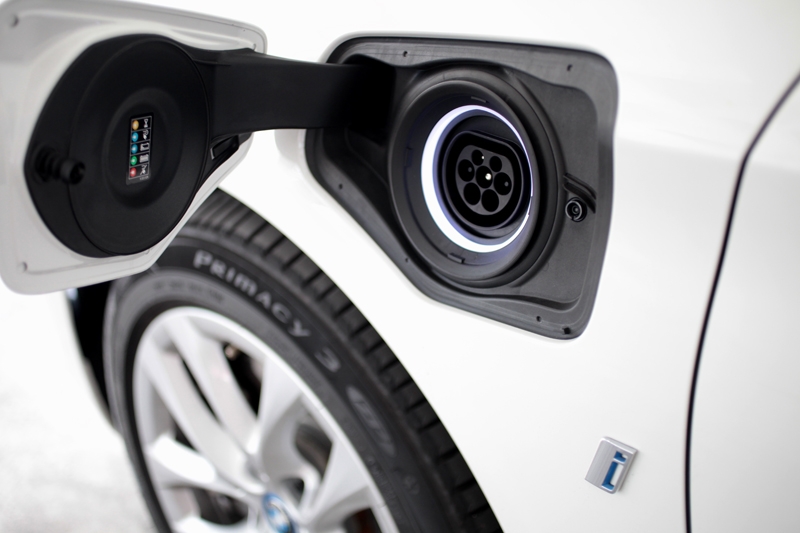 So, you may argue that buying a plug-in hybrid right now could be a rather foolish step as our island’s infrastructure is still not ready for such a ‘revolution’, if I may. On top of that, the BMW 225xe needs a Type 2 charger (available only in three locations currently); the current charging point you see mostly are still Type 1. “Then what’s the bloody point of buying one when I can’t conveniently charge it and still have to rely on the car’s petrol engine? I might as well save $15k and get a, say, Cooper Countryman!” 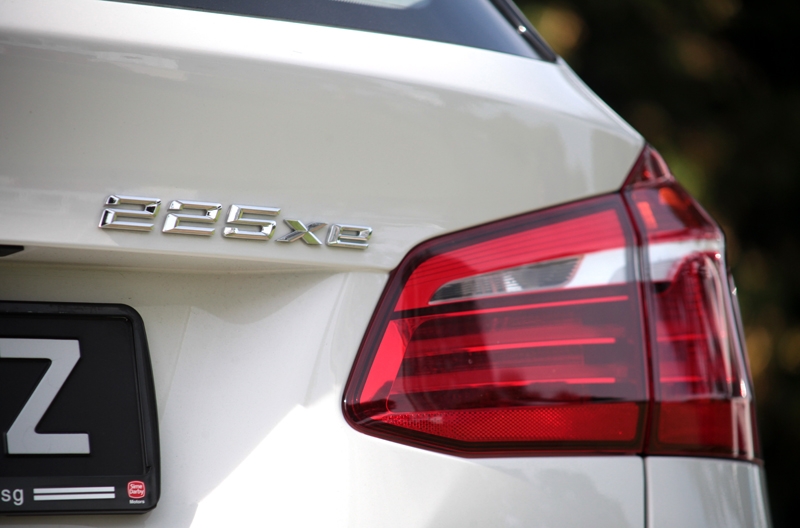 I share the same sentiment. But come to think of it, the 225xe is such a joy to punt on our island, it could charge itself - hence no ‘range anxiety’- and the smoothness is hard to ignore. 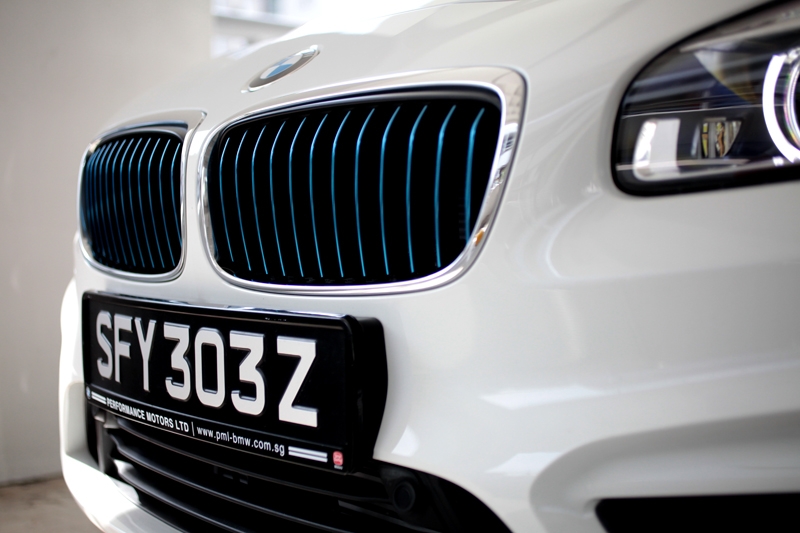 Truth be told, you need to be a real maverick to buy one. 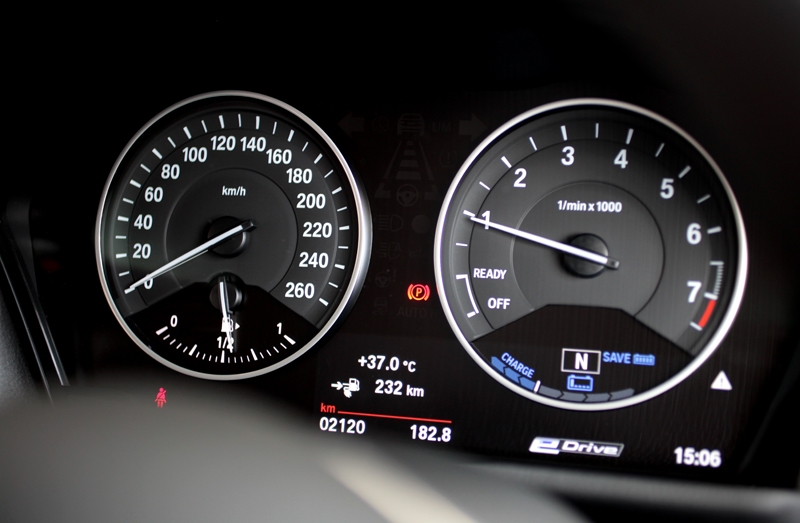 One point to note - if you live in a private landed property, BMW would gladly install a personal charging point for you. 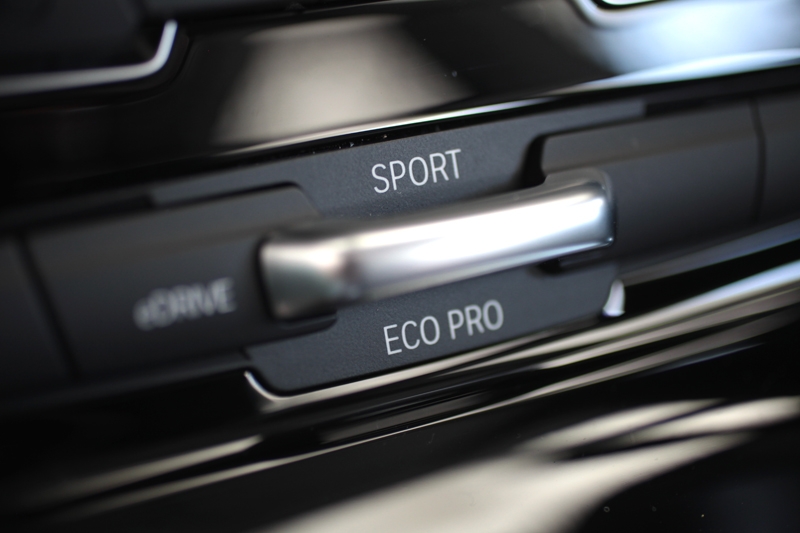 'Sport' works only in petrol mode; tweaks the engine and transmission for a more aggressive drive