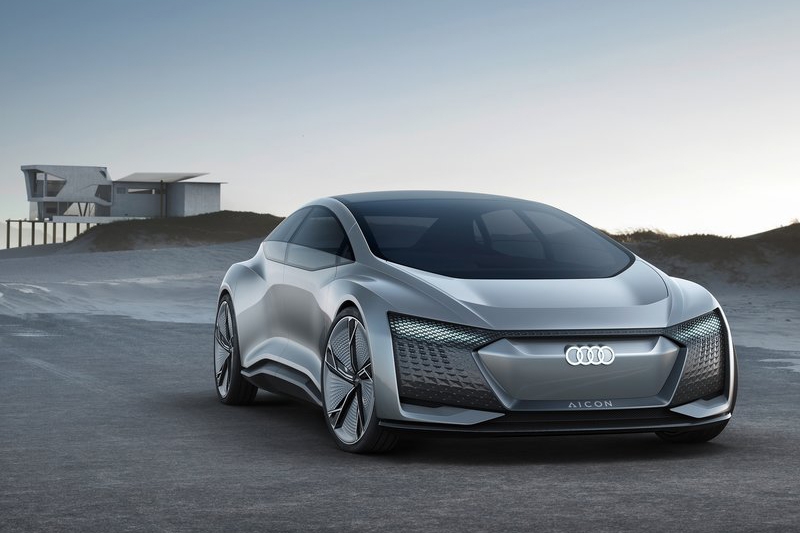 Audi presented a design concept at the Frankfurt Auto Show on Tuesday named the Aicon – with the ‘Ai’ within its name representing Artificial Intelligence. Traditional vehicle controls such as a steering wheel or pedals are absent, allowing occupants to enjoy the comforts of modern electronics and perfect ergonomics while computers deal with the driving.

Being a design study, it glimpses the exterior design of the next decades and looks spectacular in the process. Measuring 5,444mm from front to rear, and with a wheelbase of 3,470mm, it is actually longer than Audi’s flagship long-wheelbase A8 by 240mm. 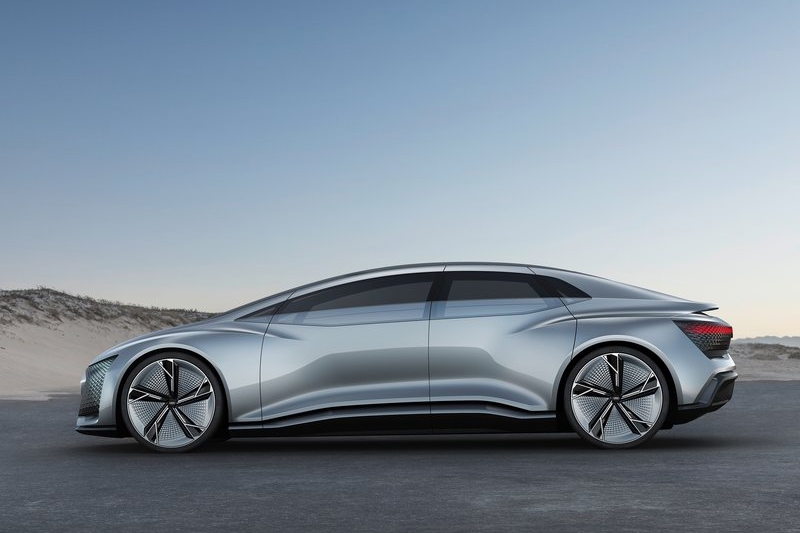 Apart from its stately size, a large expanse of glass on the front and rear, together with the convex side windows create a bright and spacious ambience for the occupants. The Aicon features a first in automotive design — a distinct line running from the A-pillar all the way to the D-pillar, emphasising the car’s length. Aggressively flared wheel arches house 26-inch wheels, placed as far outward as possible. 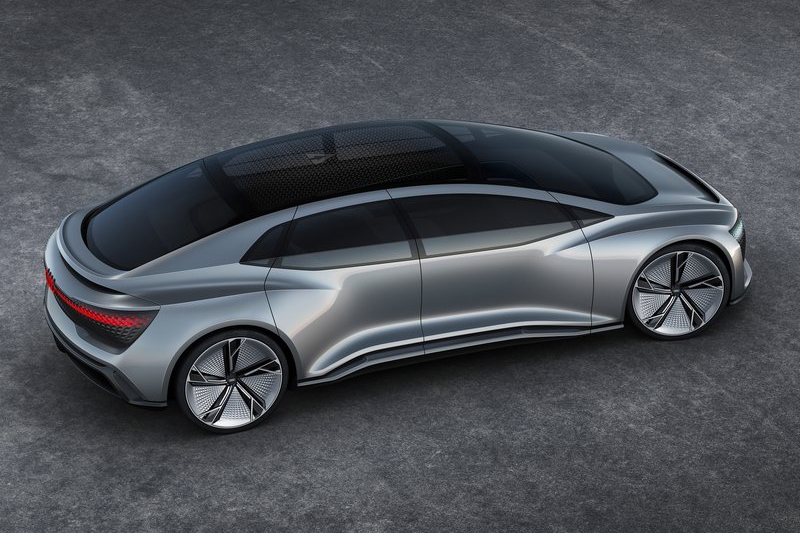 As human supervision becomes a non-requirement, so do conventional headlights and lighting units. Where one would traditionally expect headlights and taillights are now fully digital display surfaces, comprising hundreds of triangular 3D pixel segments enabling the car to display graphics, animations and information visualisations like a mini billboard. The pixels have been likened to eyes, and Audi says that they can be expanded like wide pupils or ‘squinted’ for an aggressive look. As the car detects passers-by or other road users, it literally makes ‘eye contact’ and follows them with its eyes — slightly creepy. 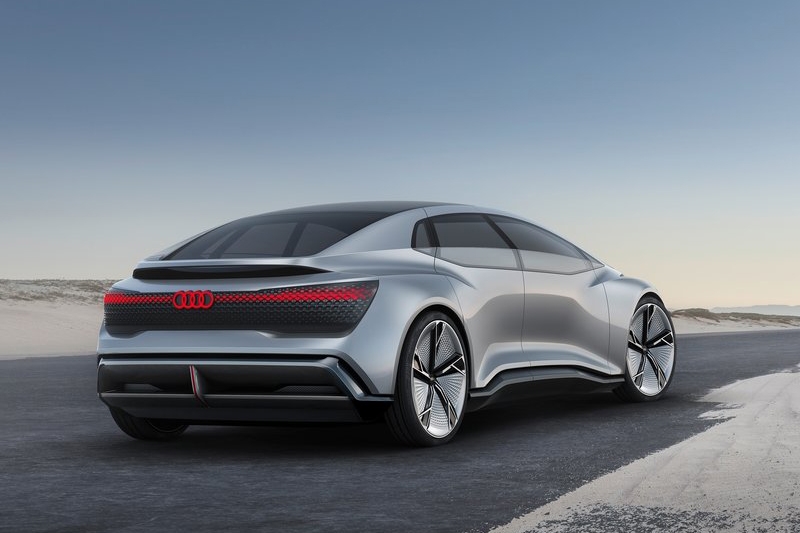 Without long-range lights, the car ‘sees’ with a suite of laser and radar sensor systems that allow it to reliably find the way and detect possible obstacles, even in the dark. When passengers exit the vehicle in darkness, a ‘light companion’ in the form of a flashlight attached to a mini-drone is activated to illuminate the passenger’s walking path. 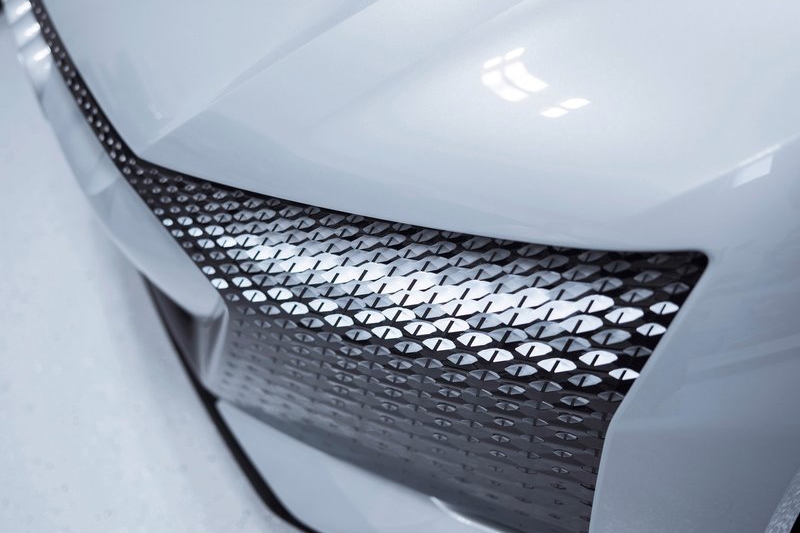 Suicide doors opposing each other open up to reveal the entire breadth of the interior, whose elements are markedly horizontal. As a 2+2, two individual front seats are offered together with an upholstered two-seat bench integrated into the rear panel. The front seats can be slid all the way back, creating a sense of openness and spaciousness especially with the lack of a steering wheel and dashboard. 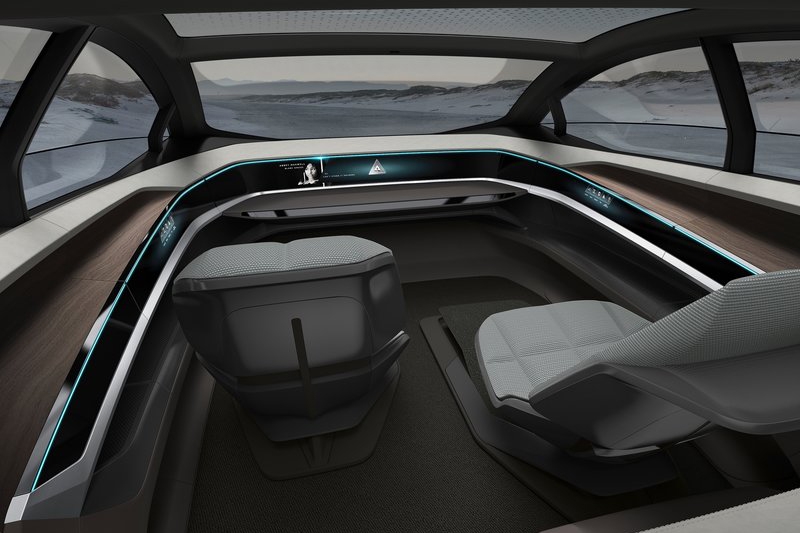 The Aicon is driven by four electric motors (one on each wheel) producing a total of 348 bhp and 550 Nm of torque. With regenerative braking systems and optimized aerodynamics, a range of between 700-800km on a single charge is possible. A high-voltage system allows the battery unit to be charged to 80% of its maximum capacity under 30 minutes, and is also equipped with an inductive (wireless) charging system. 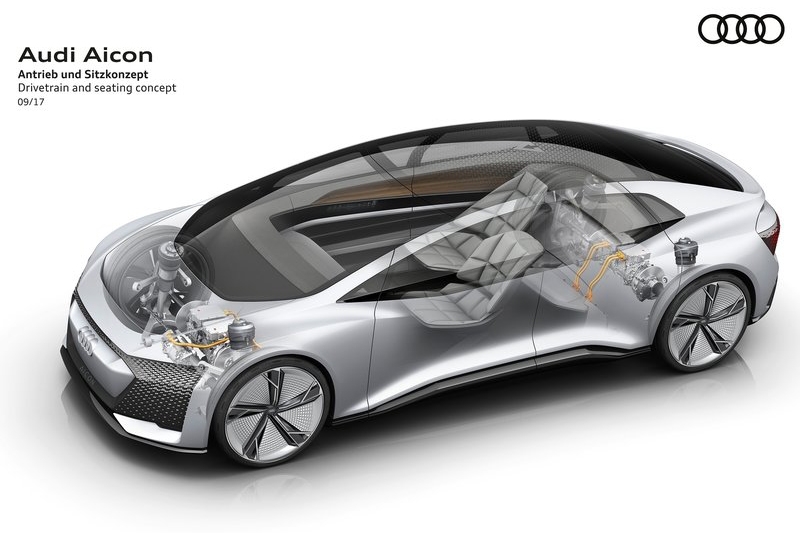 With the Aicon, Audi gives us a peek of motoring in the future, where electric and autonomous vehicles take over the task of driving — allowing us humans maximum comfort and freedom to complete other tasks while on the road. 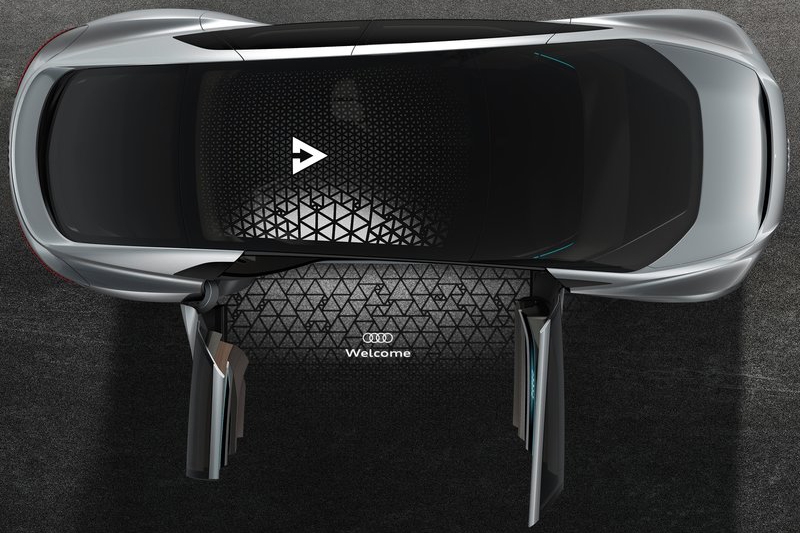