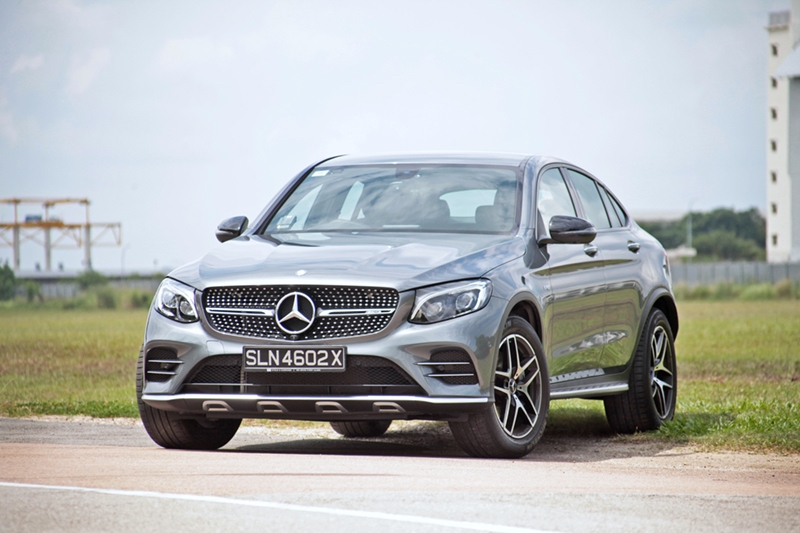 Could this be the only multi-purpose car with pace you would ever, ever need?

Here’s something funny. If you’ve read our previous reviews of the new ‘43’ range of Mercedes AMG vehicles, you would notice how this writer felt that more work needs to be done still in order to make the car more desirable.

But now with this ‘coupe-SUV’ - which all began with BMW’s X6 almost a decade ago (yes, that long) - Mercedes have found their mojo for their AMG 43 model. 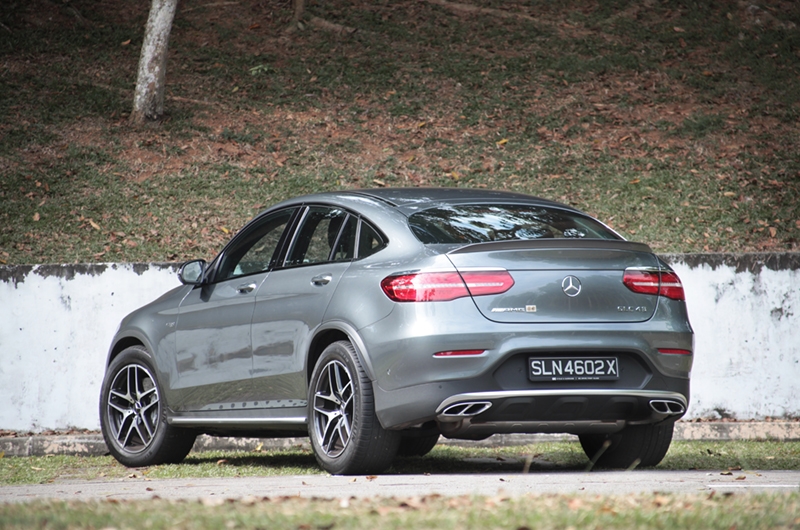 Simply because this thing is fast. Brilliantly fast. 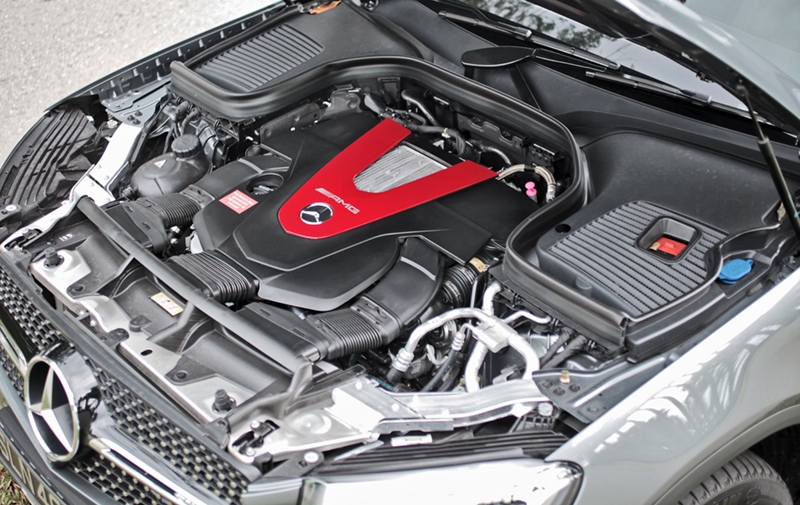 It’s the same 3.0-litre turbocharged V6 powerplant paired to a 9-speed automatic as sampled in the C43 sedan and cabriolet; which means it gets up to speed much faster than you could ever imagine. If you need, say, 10 second to sneeze and regain your composure, this thing needs half that time - 4.9 second, to be precise - to reach 100 km/h from standstill. Oh well, when you have 367 bhp and 520 Nm worth of torque at your disposal… 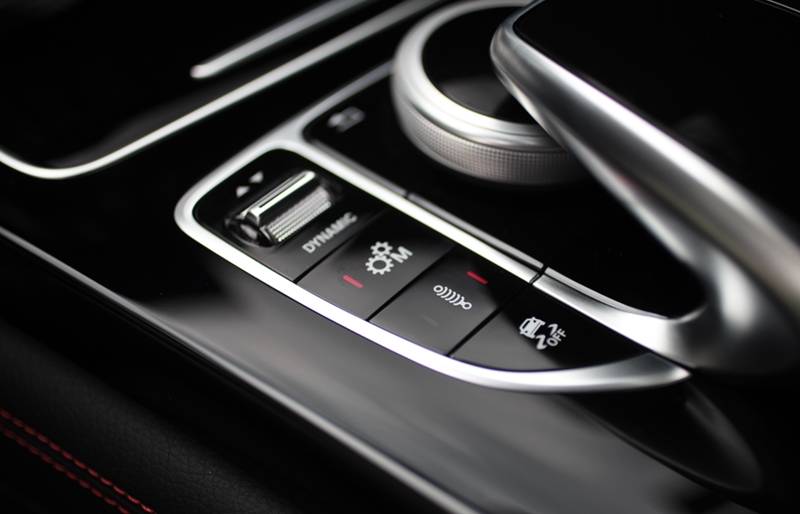 And then you have 4MATIC all-wheel drive. And then you also have superbly tuned suspension. Lets also not forget those massive brakes. All the right ingredients to make something in a SUV-esque body shell full of potential. 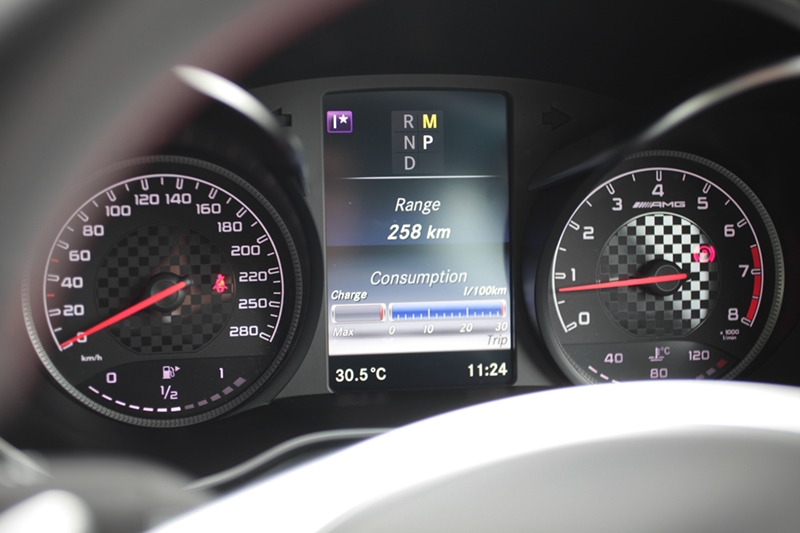 The thing is, due to all the badges slapped on the back of the car, it attracts unwanted attention anything from souped-up sedans to hot-hatches. But I’m glad to report this GLC43 Coupe will either outrun or keep up without any sign of struggle — if you’re the sort who think tall cars should be slow and remain in the slowest lane, this particular car will make you think again. 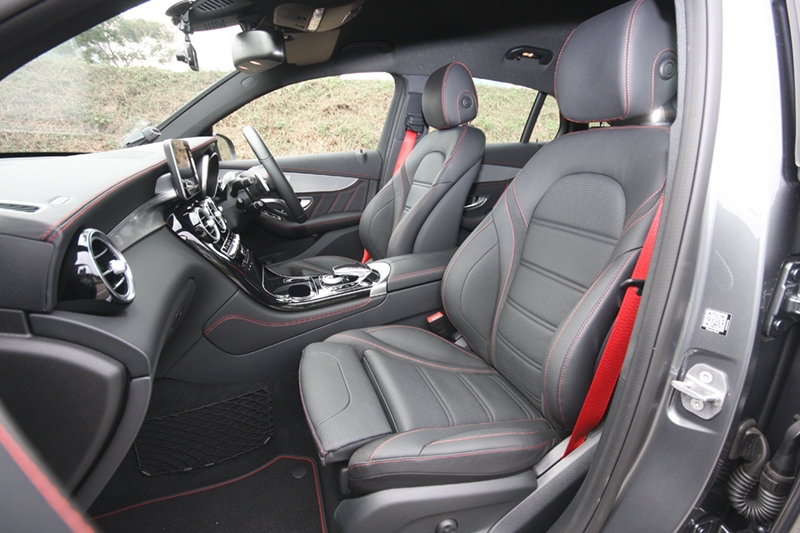 So you reckon it needs to be slowed down massively before committing to that tight left-hander. Not necessarily; set it to Sport+ and be prepared to appear out of that said corner like a superhero that had just completed his crime-fighting task. Because Mercedes had spent so much engineering effort into the GLC43 Coupe’s chassis - both software and hardware - and complimented it with an active all-wheel drive system, you get a generous dollop of feedback from the steering wheel along with preposterously well managed body movements as you change directions. 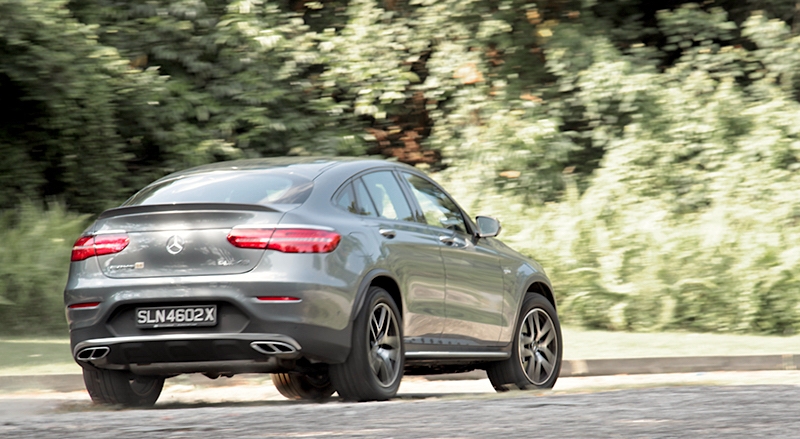 For the driver this made corners and bends an enjoyable affair, leaving a wide smile on your face. For the reckless, you will push harder just to find its handling limit — which is quite impossible also because it gets massive 235/55 R-19 front and 255/50 R-19 rear Michelin Latitude Sport 3 rubbers as standard. 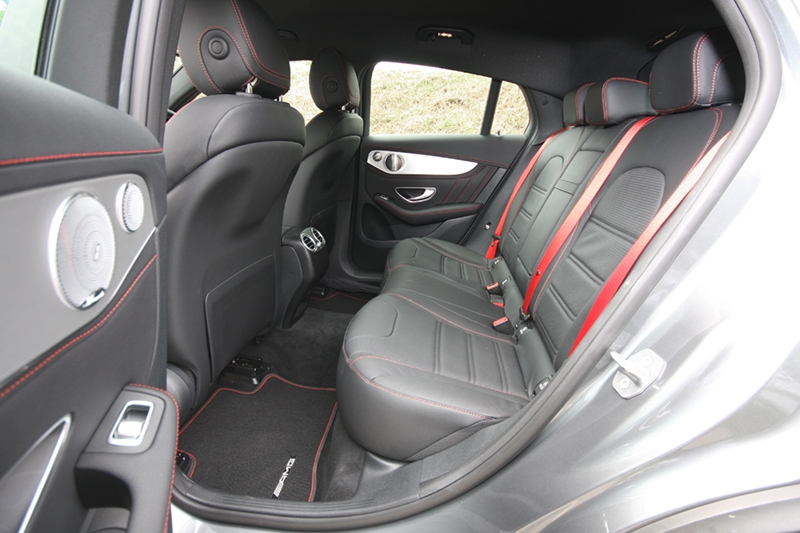 Driven in a civil manner, you get the typical Mercedes affair. Meaning a very quiet cabin with almost non-existent engine note if you’re cruising along at 90 km/h (the engine ringing only at 1,400 rpm in 9th). The similar suspension - that delivered surprising fun and capability - also soak bumps and undulations to make the ride more refined. You can expect passengers to feel as though they were swaddled and swung to sleep like a baby. 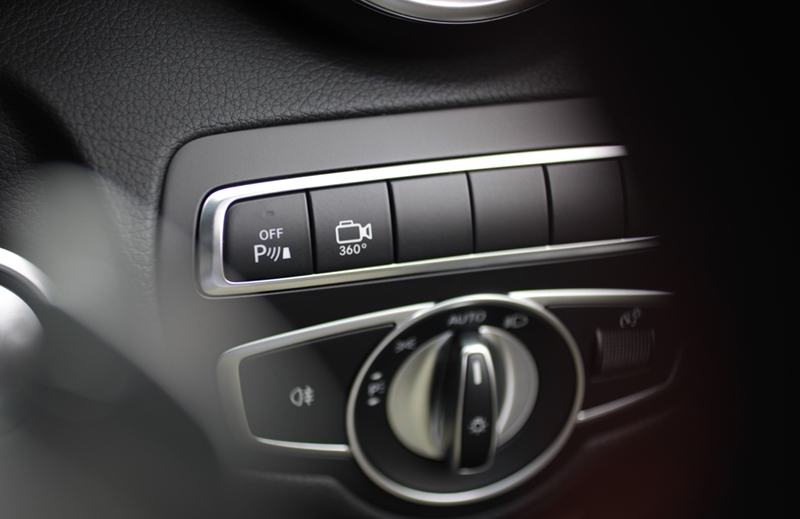 So you must be thinking this: Due to the sloping roofline towards the C-pillar, taller passengers may hate sitting at the rear. Well, no. In fact so much thought was obviously put into this car; you don’t get stadium-seating arrangement like in a Discovery, but instead, you do sit quite low like you would in a sports sedan. On top of that, (a) you do not feel as though you’re in an awkward angle, along with (b) a good amount of legroom still. While it’s best to accommodate just two adults, I am glad to also report that you could place a third in the middle; the rear air-con vents doing a good job to keep everyone back there cool too. 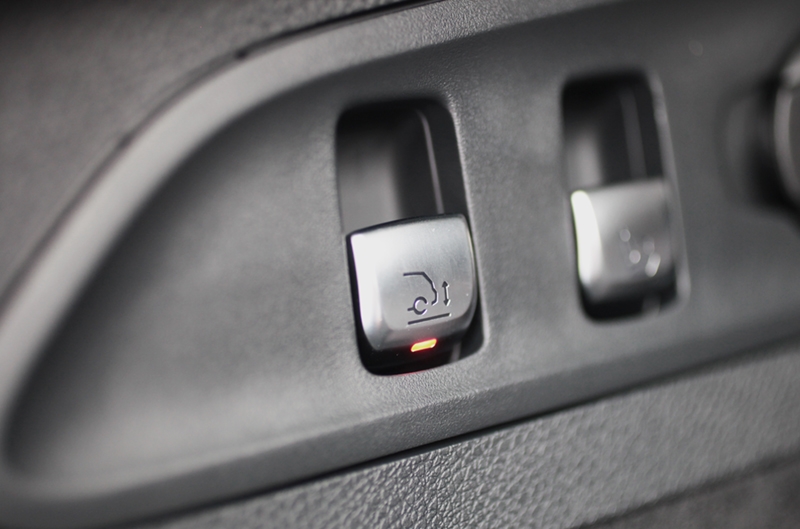 Here’s one disadvantage of having a coupe shape though: Smaller boot space. It gets 500-litres, which is 50-litres lesser than the ‘regular’ GLC variant. However, bring the backrest down and it almost triples to 1,400-litres. A smart touch would be the one-touch (pun intended) button that does the folding down for you. An even smarter touch would be the button next to it — a simple press and it lowers the GLC43 Coupe’s rear air suspension to the lowest level to make getting items in and out, especially bulkier ones, much easier. 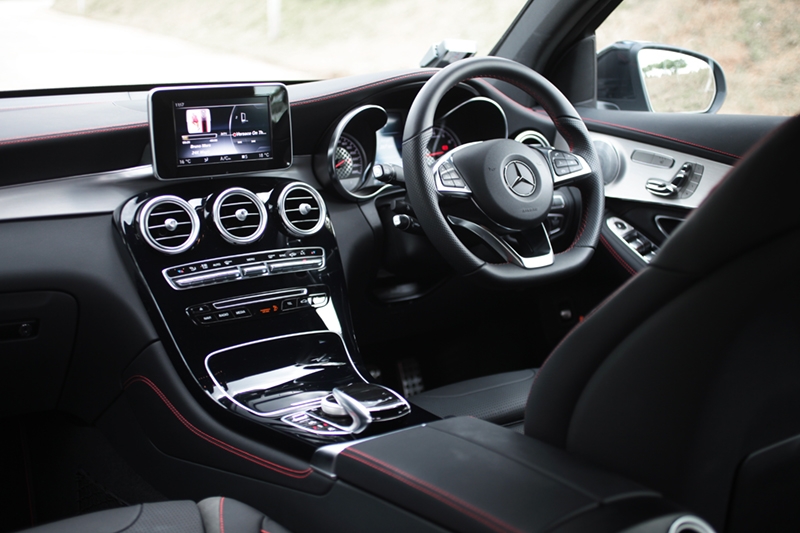 The cockpit is a pleasant place to be in and for someone standing 1.68-metres tall like moi, finding a comfortable driving position is a cinch. The body-hugging sport seat provides a myriad of support for both spine and thigh; its flat-bottomed steering wheel just so nice to the touch. The consistent complaint I’ve had with the other C models remained: The un-smart use of piano-black plastic for the center console that collects dust, handprints and scratches. (Urgh…) 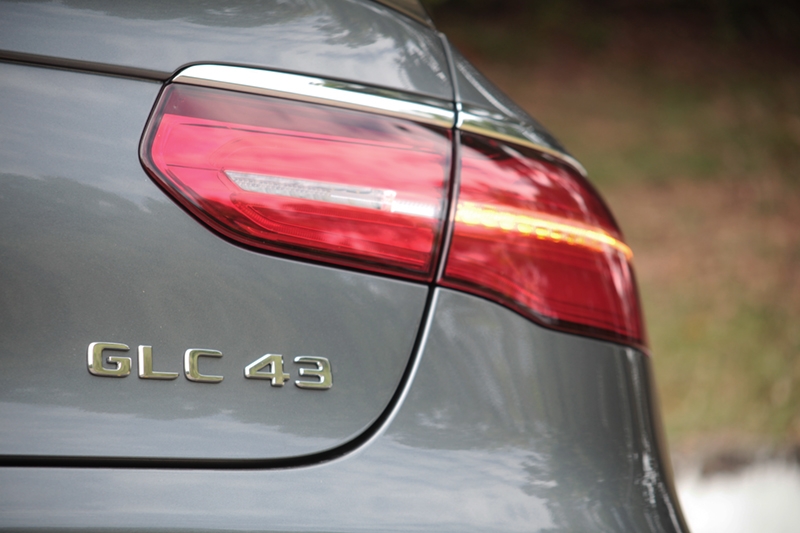 Ultimately, the GLC43 Coupe here will remain a niche and will still be outsold by its non-coupe GLC brethren; Singaporeans still want more metal and space for their money is one reason, with the other being the fact the coupe demanding an $18k premium. 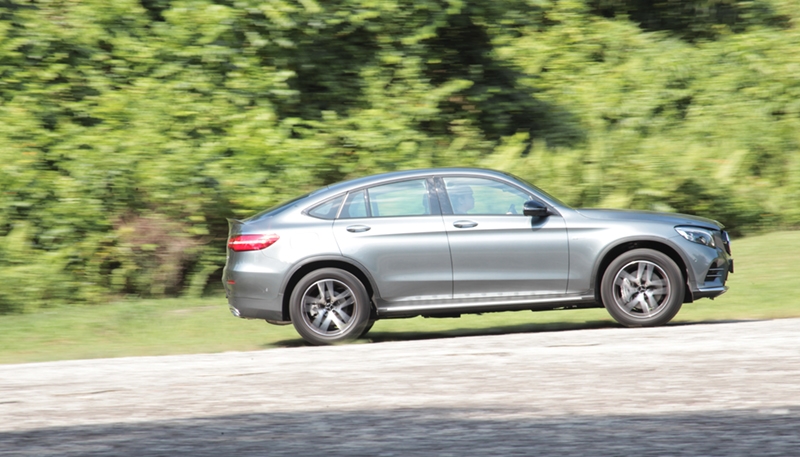 So if you want something tall, has a premium badge, good performance and handling along with style, the GLC43 Coupe then is for you. 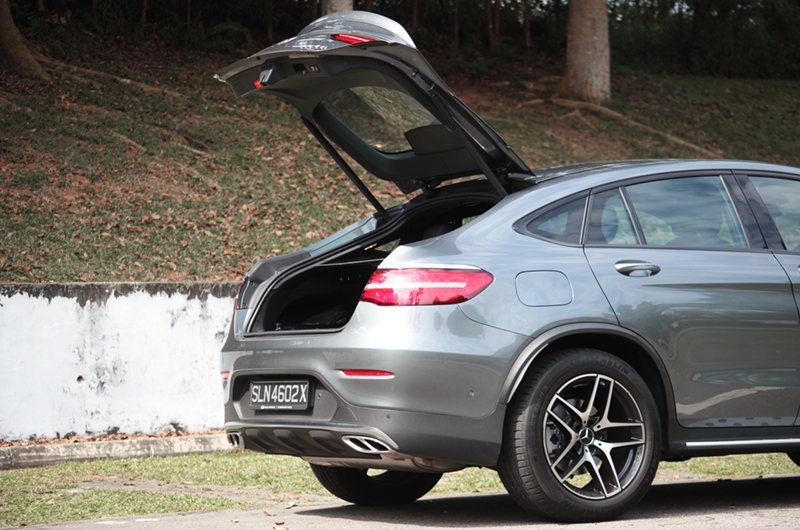 But then again, the base Macan S is less than $15k away… 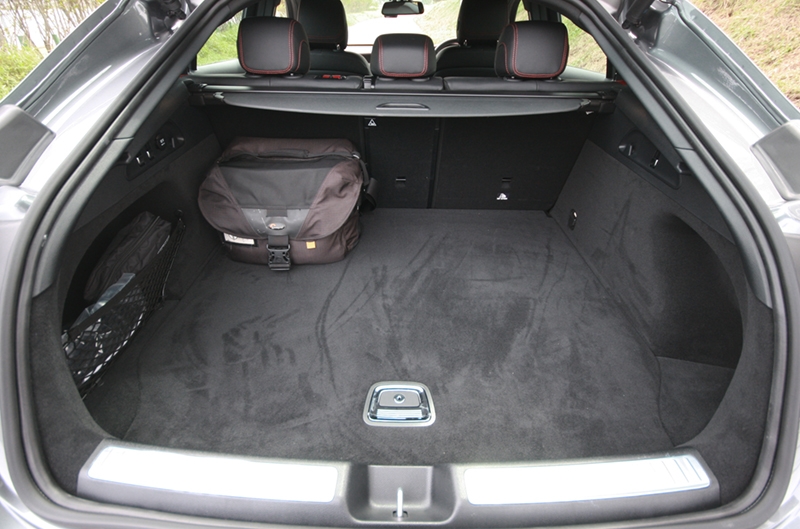 A big enough space for urbanites