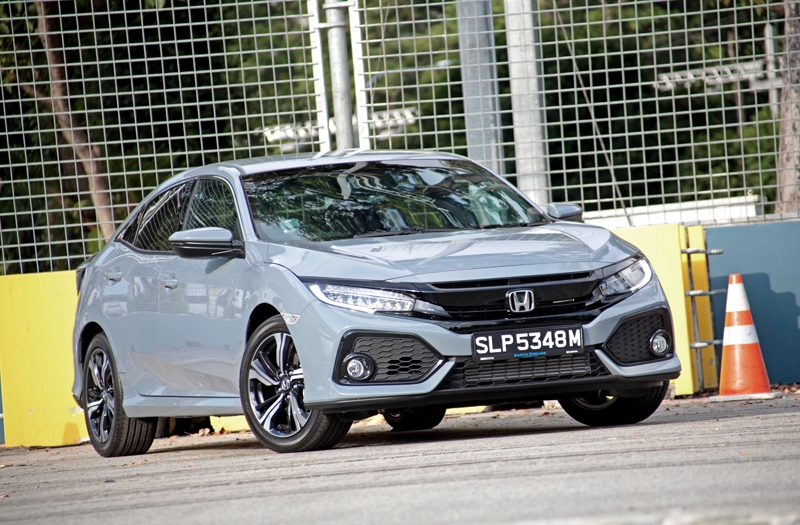 The hatchback version of Honda’s highly popular new Civic ticks all the right boxes, even for family men

This is the new Civic hatchback, and on the onset, has many good things going its way. Firstly, that radical but handsome look – think of it as the David Bowie of the family hatchback segment. You can just know it’s a Civic even if you’re a kilometer away, because the shape is so prominent; sorry Volkswagen, but even the Golf looks rather bland next to it. The same applies to your Astra too, Opel.

The sporting intent of this car is very clear, what with the glossy black center grille connecting the LED headlamps and large faux air dam at the lower part of the front bumper. Oh and for the curious, the only difference between it and the sedan brethren, face wise, is the latter getting a standard chrome center grille. 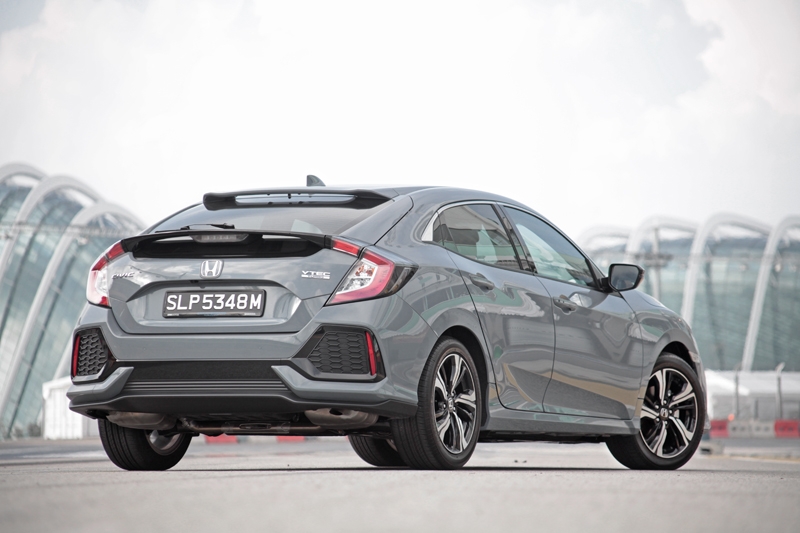 The sporty theme gets even more obvious at the Civic’s rear. A spoiler on each tailgate and roof, another pair of faux air dam at the bumper summed up with twin exhausts; all items usually needed individually from aftermarket suppliers, but Honda made it a standard affair (how generous). Unfortunately though, those rims deserve to be removed and thrown into the sea as it just made the side profile look utterly, well, ugly; and I’m saying this with much passion. 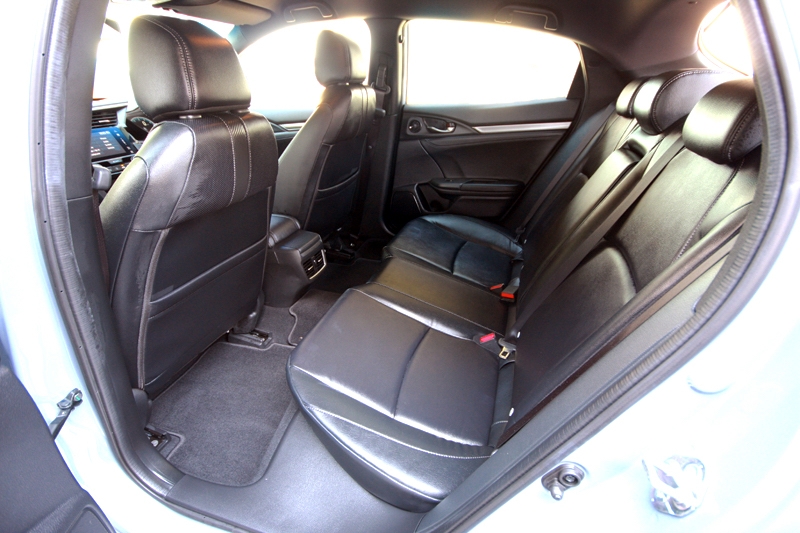 It may be 115 mm shorter in length and sits 18 mm lower than the Civic sedan, but this hatchback Civic still shares the same 2,700 mm wheelbase. The result? It’s no rocket science to see how three adults can get comfy, with more than adequate legroom. That said however, the seat felt more like a bench than a chair; more padding for better back support would be nice… 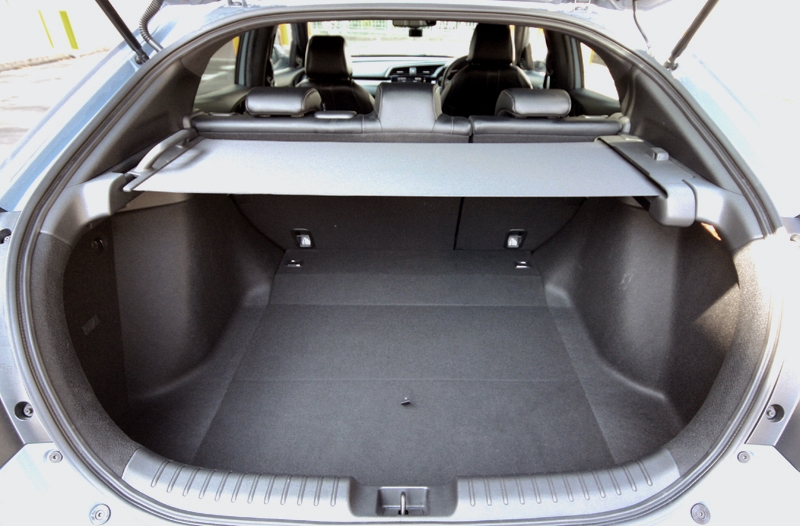 Lets not forget the boot. If the sedan offered only 519-litres, the hatchback here offers — get ready for this — 727-litres. By class standard, that is definitely massive and would be useful for a myriad of tasks. Bring the 60/40 split-folding seat down and this increases to 1,308-litres. Ahh… One advantage of hatchbacks. 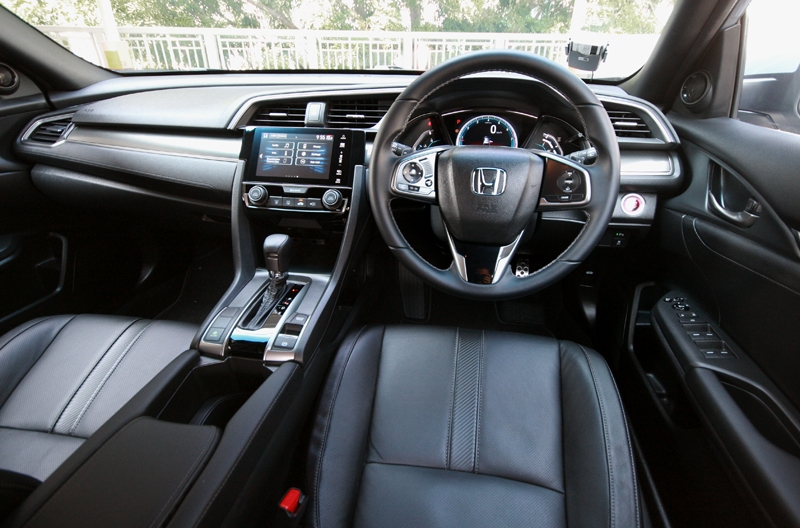 Cockpit wise, it’s no different than the sedan’s which means you get a comfortable seat, nicely-sized steering wheel with paddle-shifters, clear and easy to reach control buttons and a touch-screen head unit which allows you to toggle between the air-con, radio and multimedia devices. Apple Carplay comes standard too, by the way. 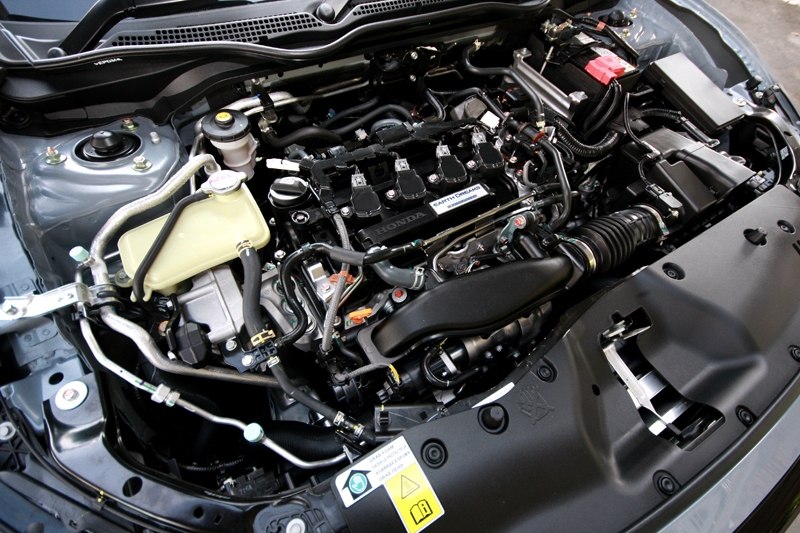 With a turbocharged 1.5-litre engine paired to Honda’s own Earth Dreams CVT powering the car, output stands at 170 bhp while maximum torque some 220 Nm. Standstill to 100 km/h is dispatched in 8.4 seconds. 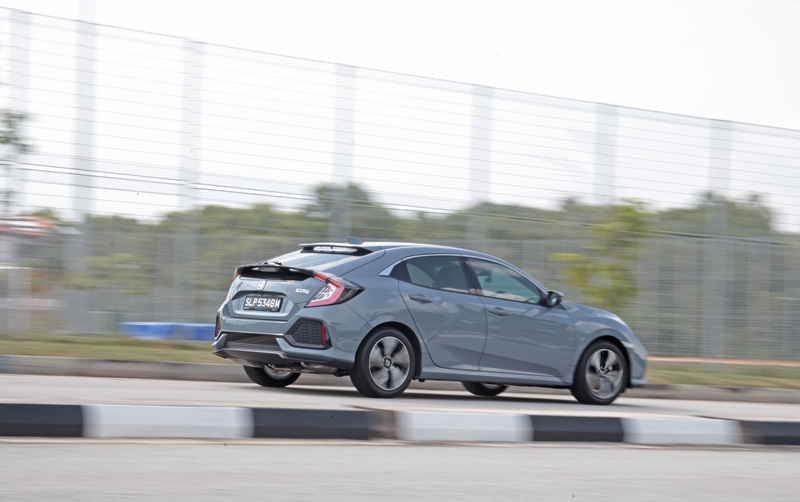 Undeniably, the powerplant and transmission combo doesn’t give you the most inspiring note but ignore that bit and you should be able to notice how brisk and effectively the Civic gets up to speed. Even in town, it closes gaps without any sign of struggle. Case in point: When you don’t have space to stop and - ahem - need to accelerate before the amber light turns red, floor the rightmost pedal and you could still escape the redlight camera. (I must emphasize this is the best example I could cite.) 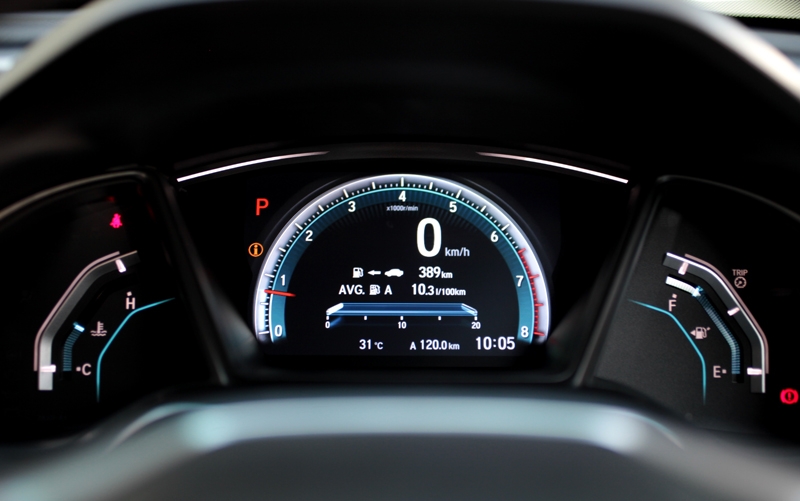 Out on the expressway, the Honda Civic hatchback impresses with its refinement at expressway-legal speeds. The cabin is well suppressed against unwanted wind and road noise, and at the same time, engine sound is only audible when the tachometer heads east past the 4,000 rpm mark. 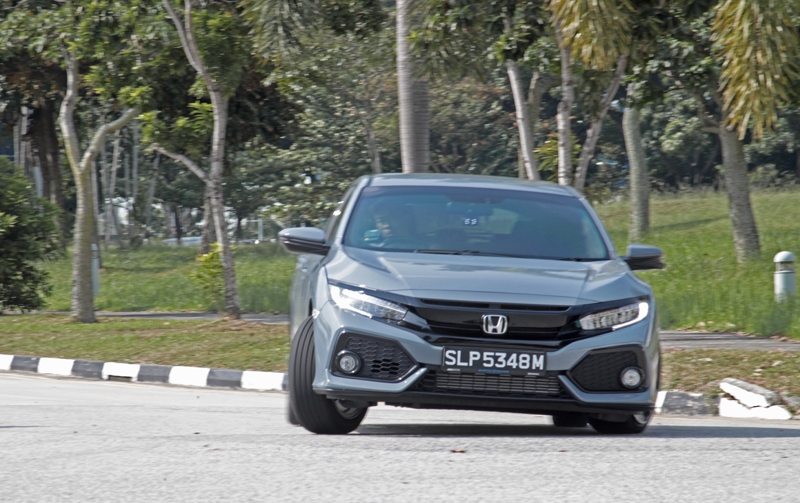 Then in terms of handling, the Civic does the job in a civil and effective manner with good feedback from the steering wheel along with a well-balanced chassis. You can enter corners at speed, confident of where exactly the nose is pointing at; but push it aggressively and understeer starts to set in. In this respect, the Golf felt more sorted. 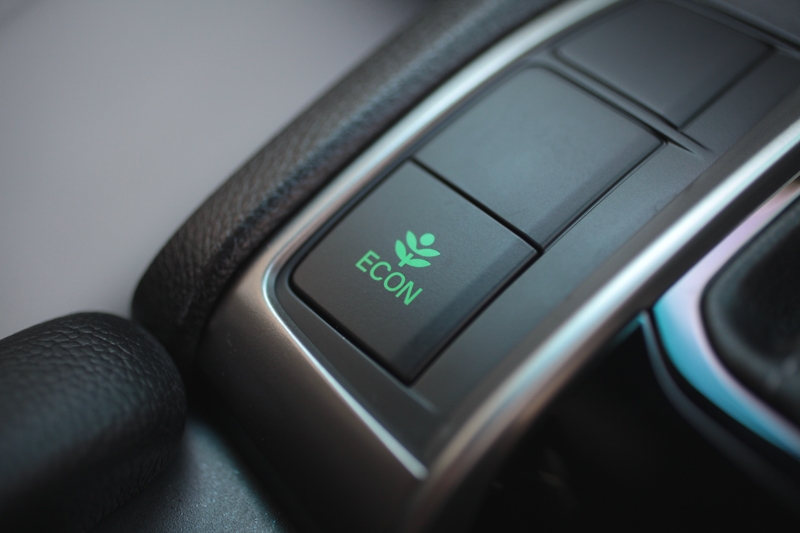 On days you want to do Mother Nature a favour, simply press this button

Road undulations are absorbed with aplomb, and if your daily commutes involve both the KPE and MCE, I am glad to report that your spine won’t break after a month and your passengers will not be thrown about like ragdolls. If the whole point of the Civic’s suspension set up is to have a balanced sport/comfort like the Golf, then Honda frankly deserves a pat on their back for coming up with something very close to the German. 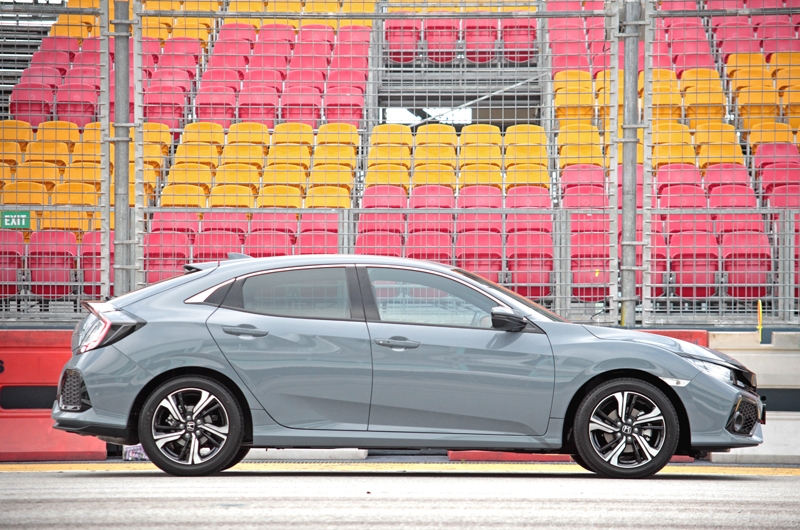 In a nutshell, what Honda has given us here is a complete and competent turbocharged hatchback that has both power and looks to boot. You can’t go wrong with this one, that’s for sure. 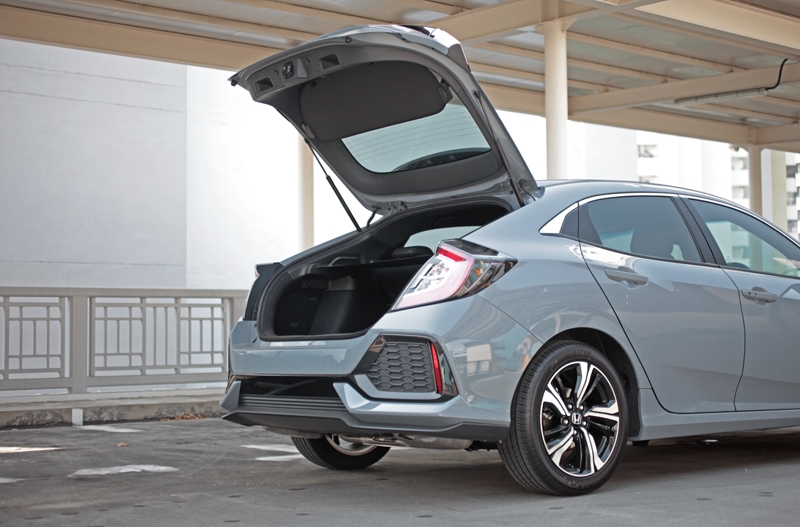 The only thing that needs time to digest here is the asking price. At more than $140k a pop with COE, the highest spec Golf TSI EQP (less than $122k) and Astra 1.4 Turbo (less than $127k) ended up sounding like the real bargains. 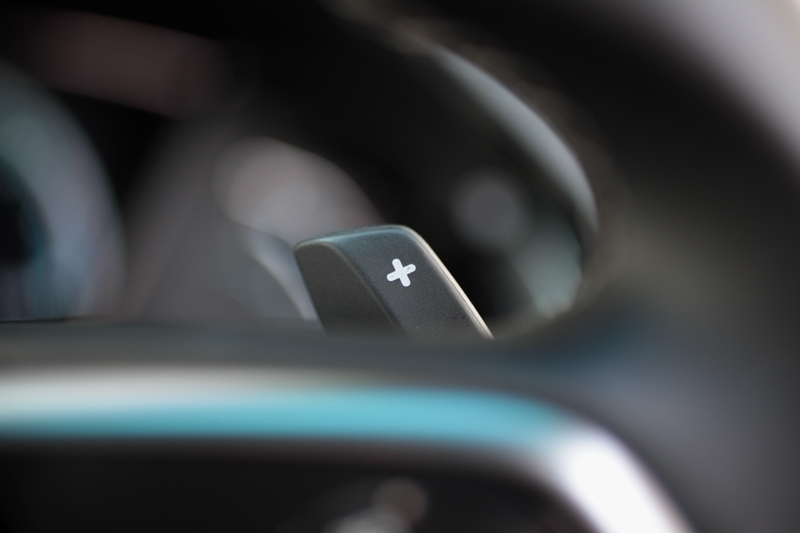 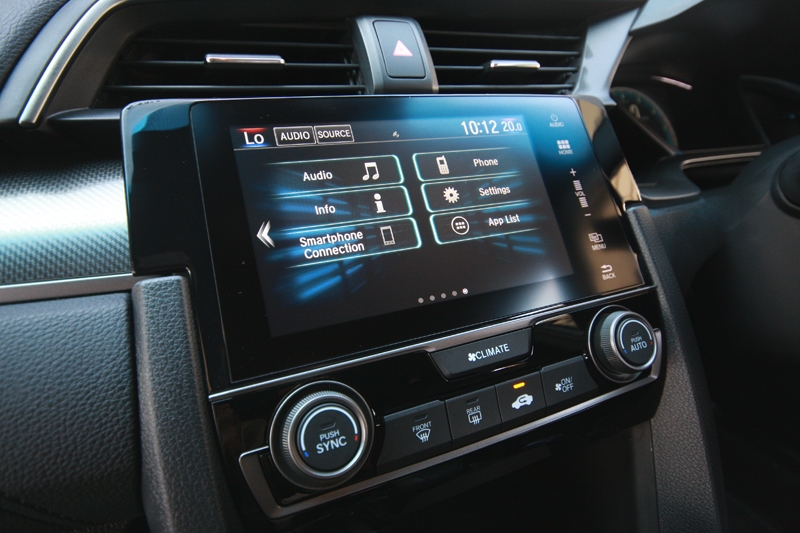 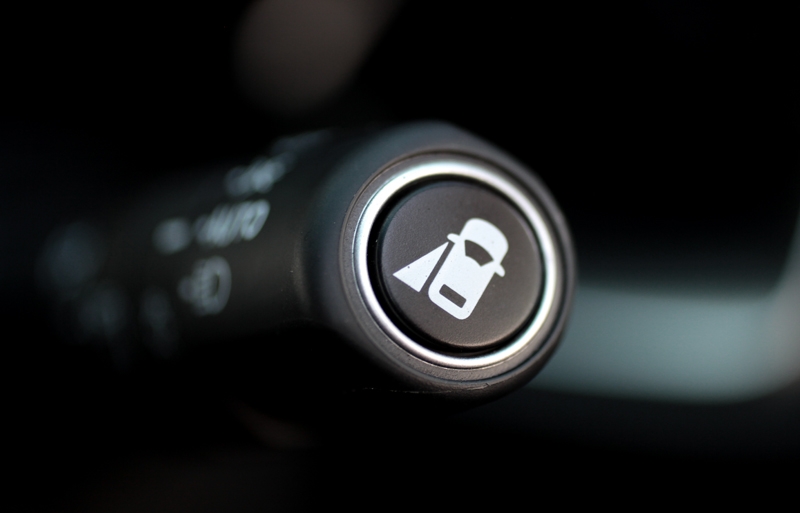 Like in the sedan, Honda's LaneWatch blindspot monitor comes at no extra cost