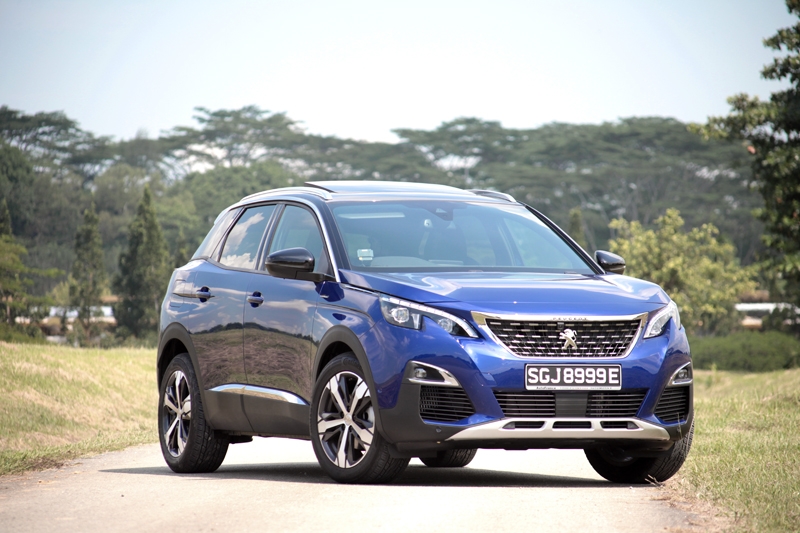 Peugeot 3008 GT-Line | Pulling All The Stops

Surprisingly, this updated French crossover offers a lot of car

The 3008 is, perhaps, one of the best-selling Peugeot model on our island with the sheer number of its first-generation model plying our roads. In fact, it was also this model that welcomed first-time buyers into its direction; after all when it was first introduced, no other Europeans offered power, style and practicality in one package.

Somewhat, its fanbase did not follow through with the refreshed 3008 though. Perhaps because it was not offered in petrol variant; or it could be that Volkswagen’s Tiguan sounded like a far more interesting proposition. 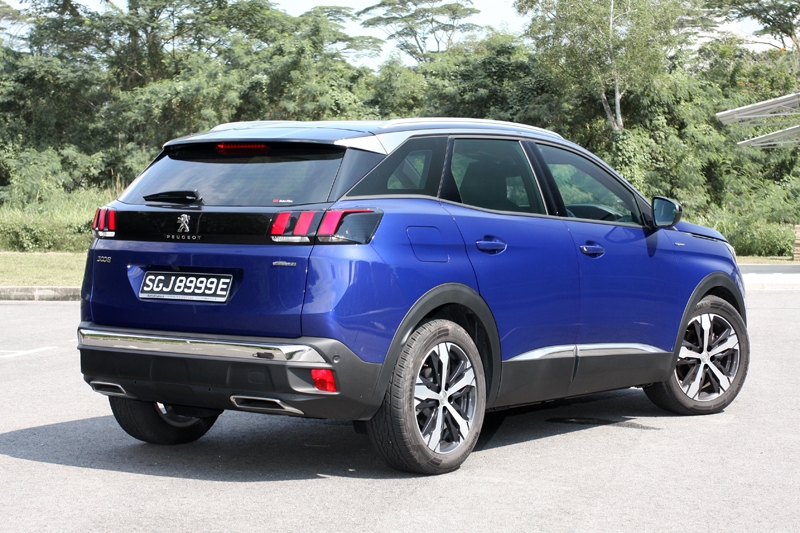 Peugeot obviously knew that problem, which was probably why they pulled all the tricks out of their bag for this second-generation 3008. 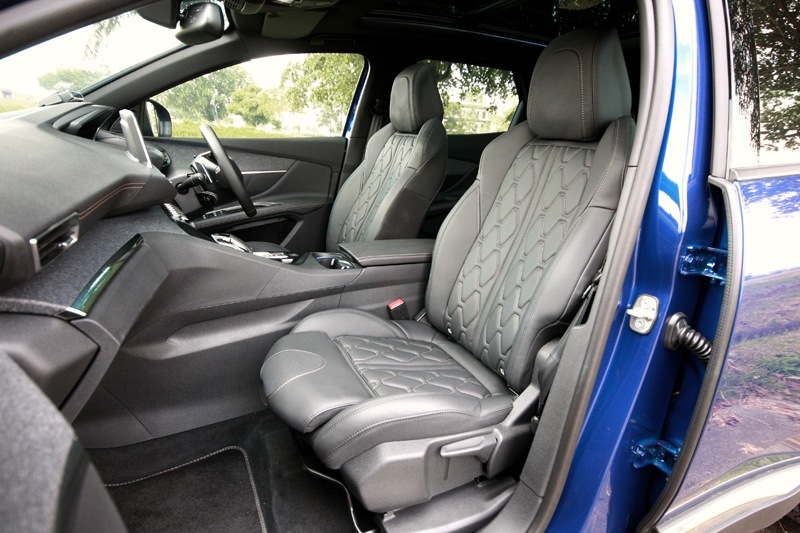 To begin with, the exterior is one that stands out from the rest of the crowd, offering even more style than the new Tiguan. In fact to be blunt, it is giving the Range Rover Evoque a good run for its money; come to think of it, if you’ve always wanted an Evoque but could never come to terms with shelling out more than $220k for one, you should be able to settle for this 3008 without any doubt. 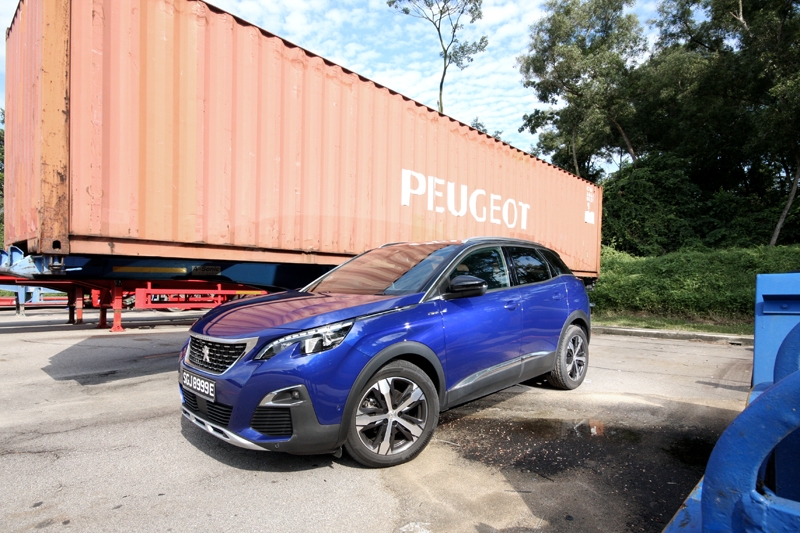 Going around the car’s exterior, it’s a far cry from its predecessor, and that’s a bloody good thing; Peugeot’s design team did a brilliant job here. The face is highly detailed, with the slit-eyed headlamps, rather stylish grill, foglamp housing and faux skid plate all making the car look rather menacing but playful at the same time. Obvious shoulder lines flanking the car added more bulk; it doesn’t make the car look silly, but instead, peculiarly muscular… 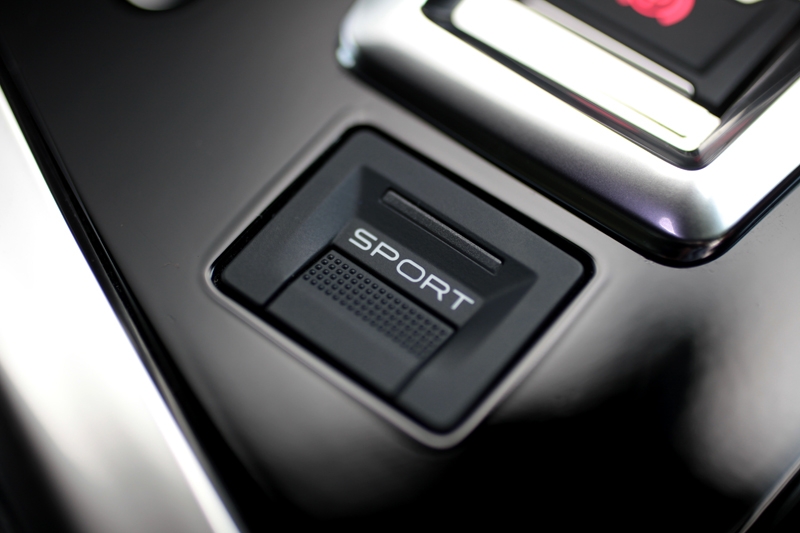 The rear looks chunky, like how an SUV should, with that pair of exhaust tip integrated into the rear bumper adding more style. By the way in case you’re curious, a large sunroof, roof rails, 18-inch alloys wrapped in 225/55 R-18 Continental ContiCrossContact LX2 rubbers comes standard. 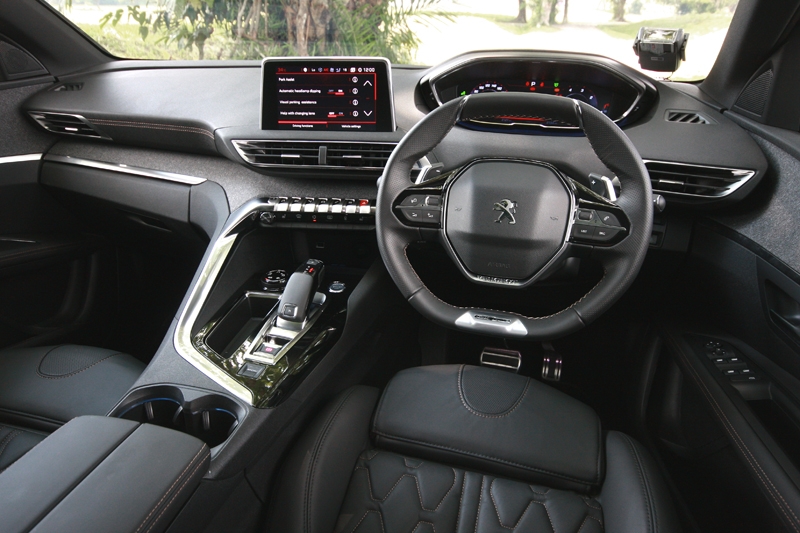 Interior wise, you can safely say Peugeot was going for the futuristic theme; just look at that oddly shaped steering wheel and airplane-inspired control switches below the air-con vents. Build quality is excellent, and there’s that sense of plushness that’s hard to deny. And you must love the seats though; huggable and supportive along with stylish stitches, you could probably drive straight to KL without the need to stop and stretch. 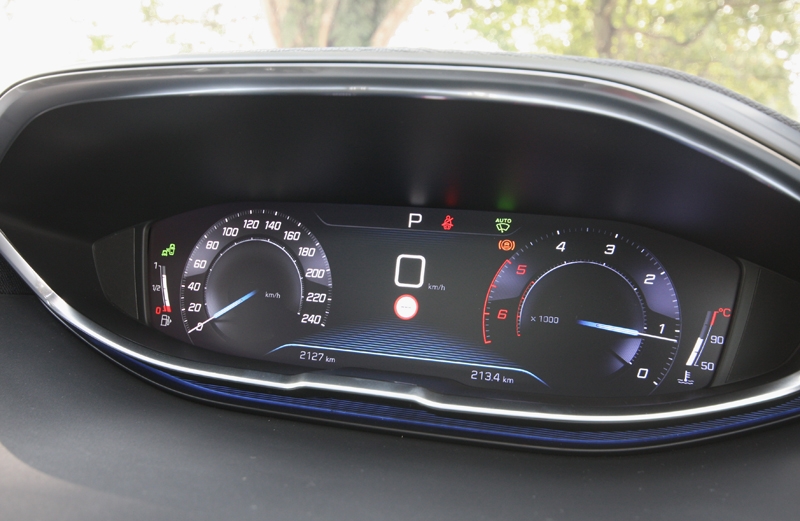 The only quirk I discovered? The meter display: At my comfortable sitting position, the steering wheel hindered my view to the point I accidentally went beyond the legal speed limit as my field of vision was blocked. (No, I’m not making excuses…) 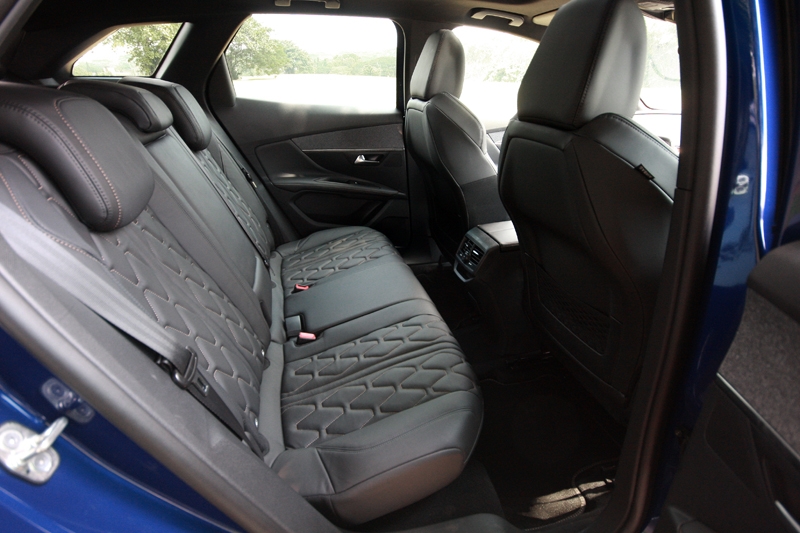 For small families, the rear should live up to the daily task, even with a child booster seat in place. Without it, three average-sized adults should be able to sit comfortably with more than adequate head and legroom; over longer distances however, it’s probably best to ferry just two. 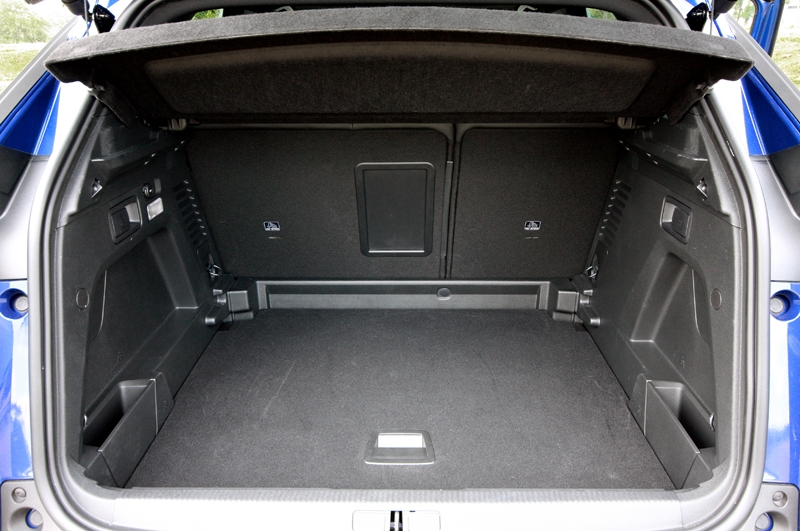 The longer wheelbase this time around also translates to a larger boot capacity. With 520-litres, you know you can convert it into a moving storeroom if the need ever arises. For days you need to purchase small furniture from IKEA, rest assured this 3008 is capable - bring the rear seat down and you immediately get 1,580-litres worth of space. 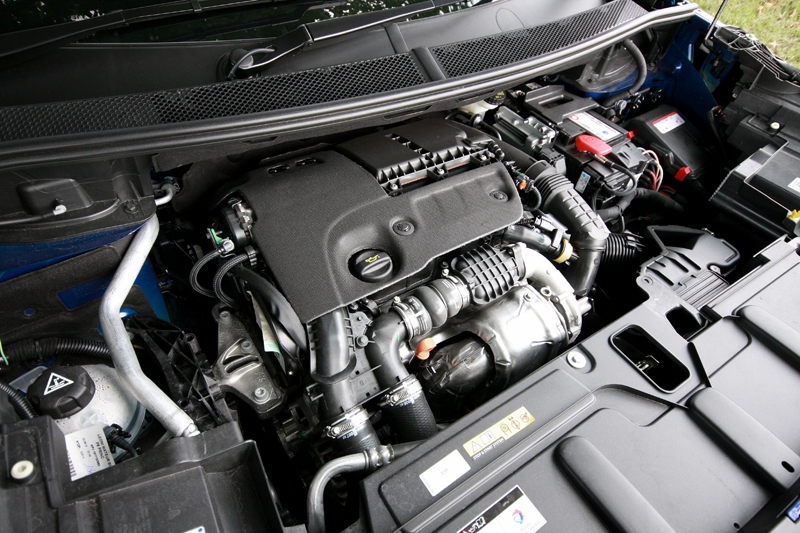 The most stylish gear-shifter you could ever find right now

While it feels no faster than a turbocharged 1.4-litre petrol hatchback, it gets up to speed in a respectable fashion; feeling lively particularly past the 2,500 rpm mark. Better still, it’s willing to be stretched near the redline without feeling strained. That said even if you’re in no real rush, the 3008 doesn’t feel out of place with power constantly available to close gaps in traffic. 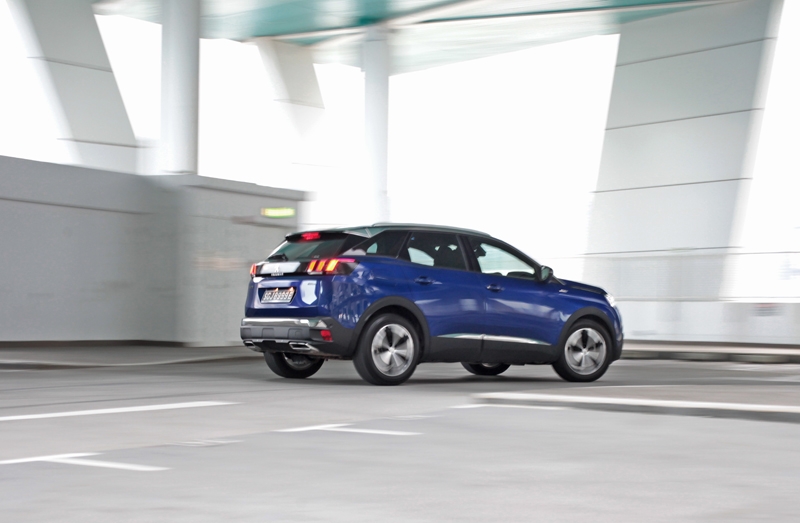 The 3008 deserve praise for the respectable sound dampening. Cruising along the expressway, the engine sound does not intrude, and both wind and tyre noise also seems almost non-existent. This is a remarkable improvement over its predecessor; if I may add, even the standard sound system delivers brilliant sound. 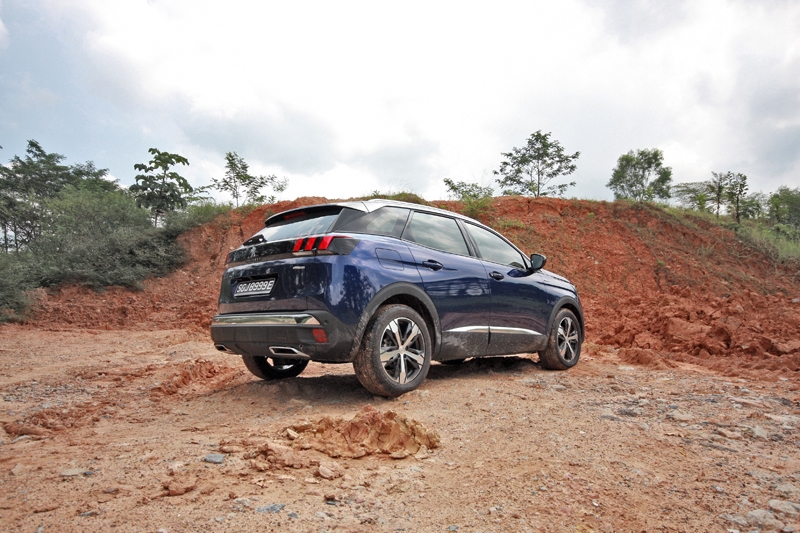 Can be taken off the beaten path, if you'd like

The 3008 handle very well despite standing taller than its 308 hatchback sibling. There’s good feedback and feel from the helm, and you know exactly what the front two wheels are up to. Surprisingly, you can still play boyracer, with the chassis all geared to play along. Like other tall vehicles however, tighter corners do reveal the understeer gremlin. 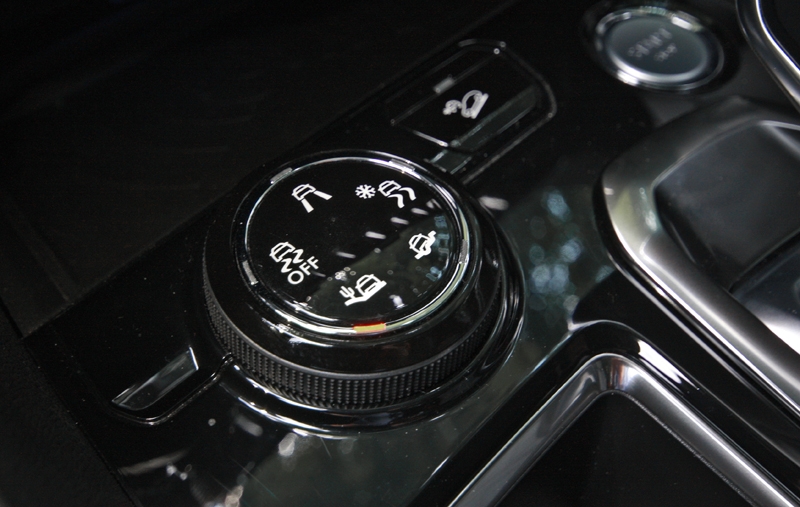 This is a front-wheel drive car, so it’s quite a surprise to find a Range Rover-like all-terrain dial just above the gear selector: It allows you to pick the surface you’re driving on namely Snow, Mud, Sand and ‘Normal’. Well with the 22 cm ground clearance, I took the 3008 off the beaten path and safe to say, it seem eager and confident enough. But do think twice before you join the Evoque/Discovery Sport group on their Sunday off-road expedition though. 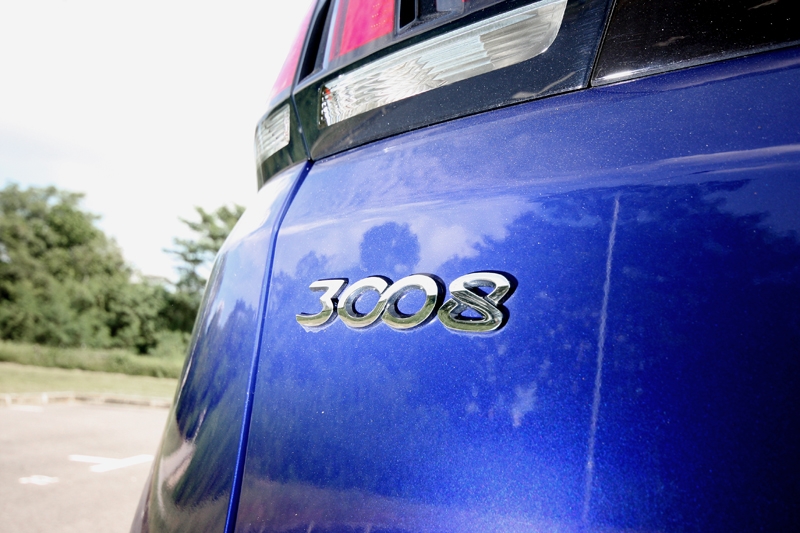 As a whole, this Peugeot 3008 GT Line is a pleasant crossover to have. On top of the great looks inside and out, it’s undeniably nice to drive as well, complimented further by the long equipment list. Oh, there’s also the 1.2-litre turbocharged petrol variant available now, but lets keep that story for another day.