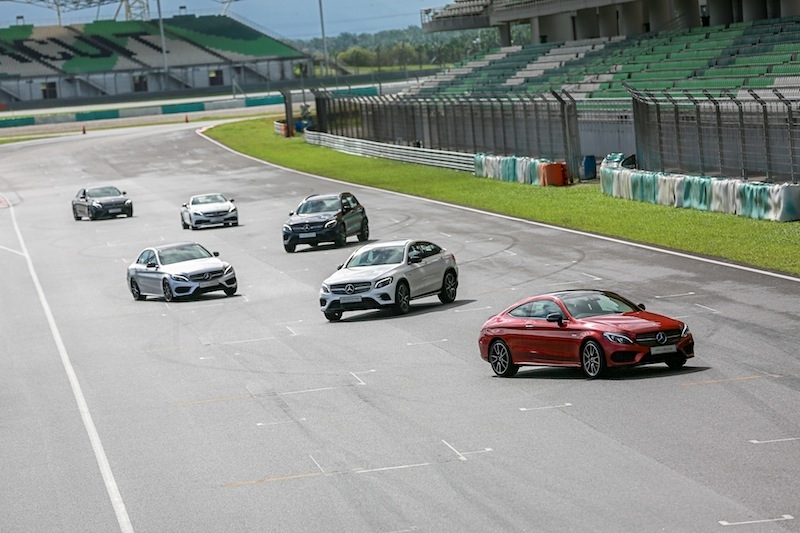 Mercedes gave us the keys to their new AMG 43 range, and boy, what a blast it was…

BMW has the 340i to bridge the gap between the 320i/330i to the hot M3, while Audi has the S4 to ensure the enthusiastic A4 2.0 TFSI owner has something to look up to until they could afford a full-whack RS model. You get the drift.

But Mercedes has, erm, none. 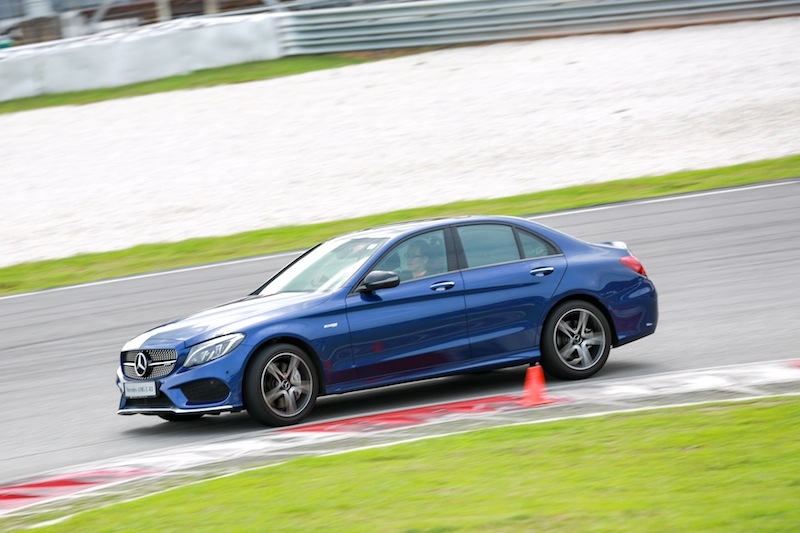 That was until the AMG C43 sedan arrived. For fans of the brand, this model simply means that Mercedes now has a direct 340i and S4 competitor. 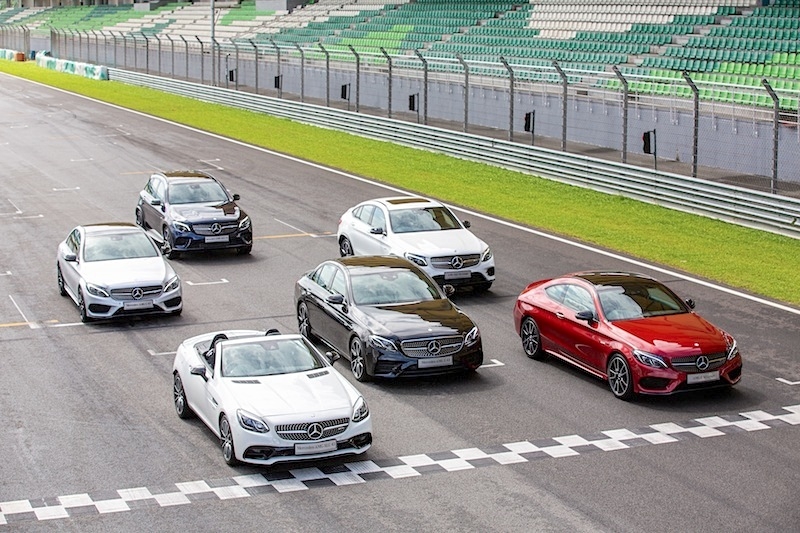 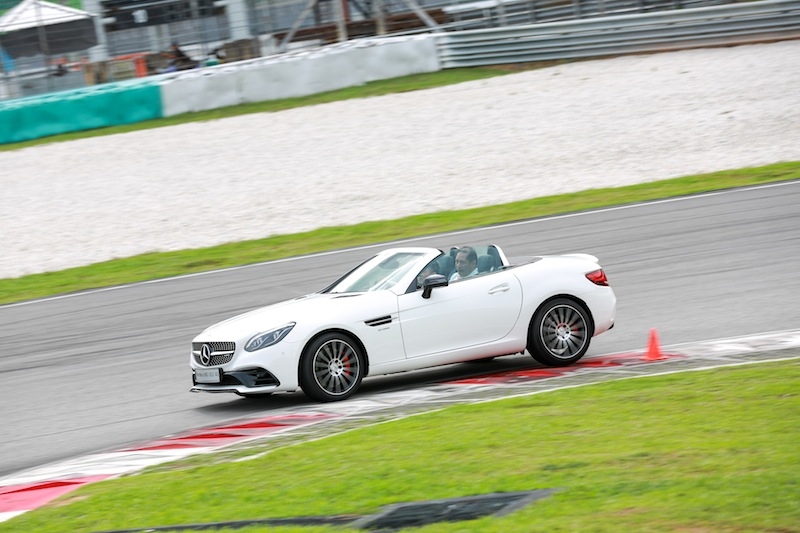 Of course, whenever you mention the alphabets A, M, G together, performance comes to mind. All those images - in slow-motion - of a hot C-Class or E-Class wagging its rear with smoking tyres come to mind. AMG equals performance, full stop. 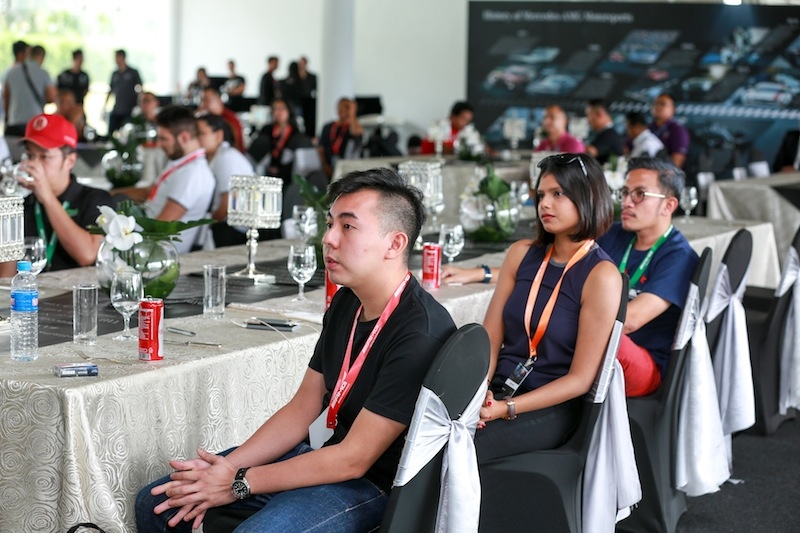 Which came to no surprise why Mercedes flew us to the Sepang International Circuit very recently to let us experience the entire AMG 43 range firsthand. Then to sweeten things, they’ve even thrown in the A45/GLA45/CLA45 and C63 S AMGs into the mix. 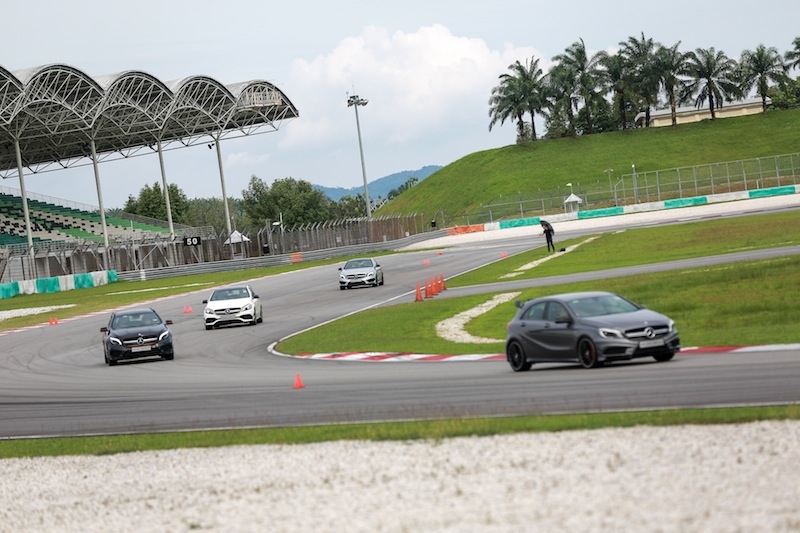 My session began with a high-speed cornering exercise, utilizing the A45, GLA45 and CLA45 AMG. This particular exercise, which was conducted at Turn 6, displayed the ‘entry-level’ AMGs’ capability despite its pint sizes (ok, maybe the GLA45 is slightly bigger than a pint). Taking three tries in each car, the entire group - consisting of media from Indonesia, Vietnam and Thailand besides Singapore - was encouraged to push the car’s limit as much as we could; in my case, ahem, to hear the tyres scream and wake up the safety nannies of the car. 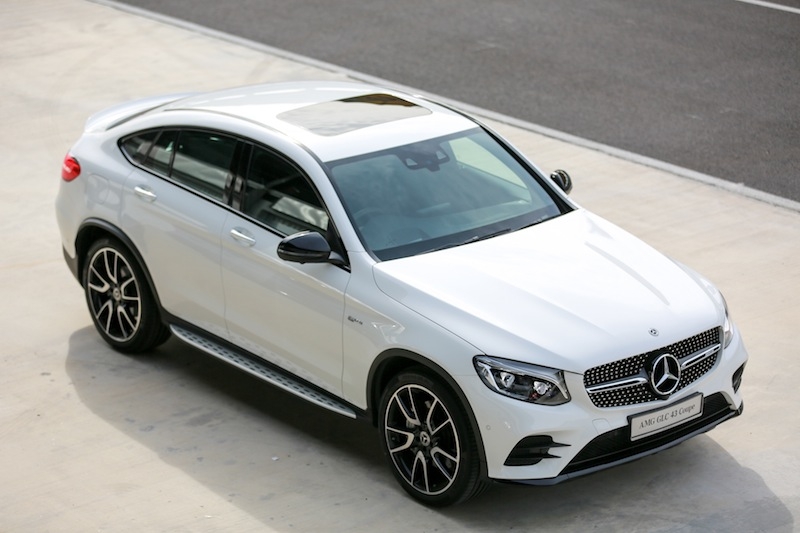 Honestly, I had the most fun with the GLA45 AMG — there’s just something about this car. It’s the tallest among the lot, and probably the stiffest too, but the extra body movements made the drive so entertaining as you pick up speed; grip remained brilliant, and the same must also be said about its brakes. 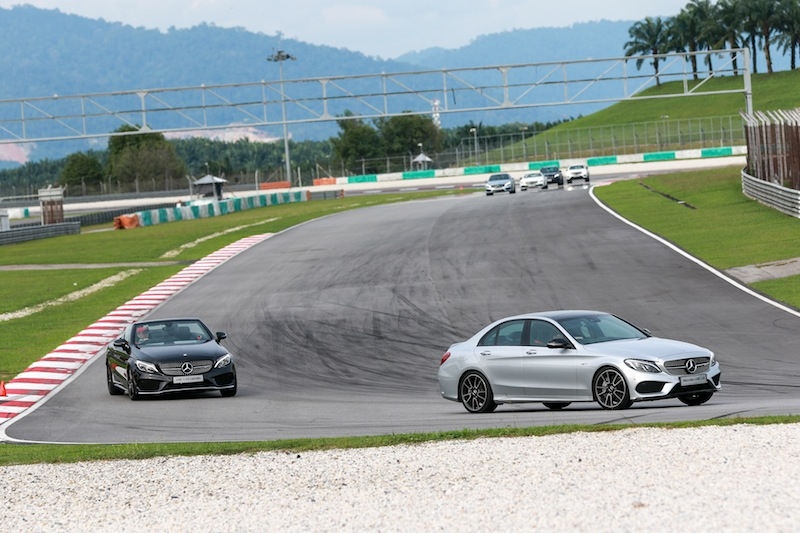 Next up was the AMG 43 station, where we had - sans E43 - the entire C sedan, cabriolet and coupe, together with the GLC and GLC Coupe at our disposal. This station saw us drive through turns 8 to 14, which has a good mix of straights along with fast and tight turns. Personally speaking, my impression of the C43 sedan remains: The 4MATIC all-wheel drive system provided good grip, and road-holding was flawless to say the least; but the steering still needs to be sorted even in Sport mode. 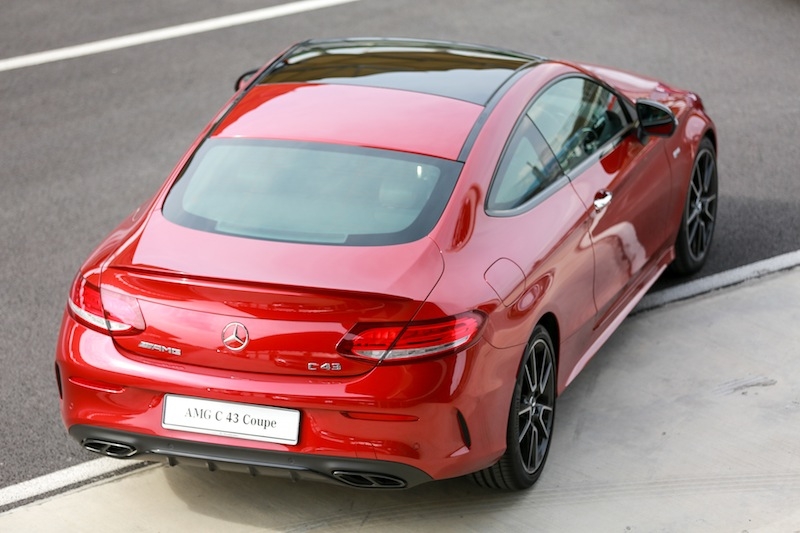 Separately, the Coupe felt slightly sweeter as a whole. But the biggest surprise here was the GLC43 that felt not far off the Macan S, if I’m allowed to be bold here; power delivery predictable, the entire chassis felt connected, anchors were strong while the cockpit is well appointed. Its Coupe version felt no different but personally, the GLC has my vote still as it looks more brutish which fits the performance perfectly. 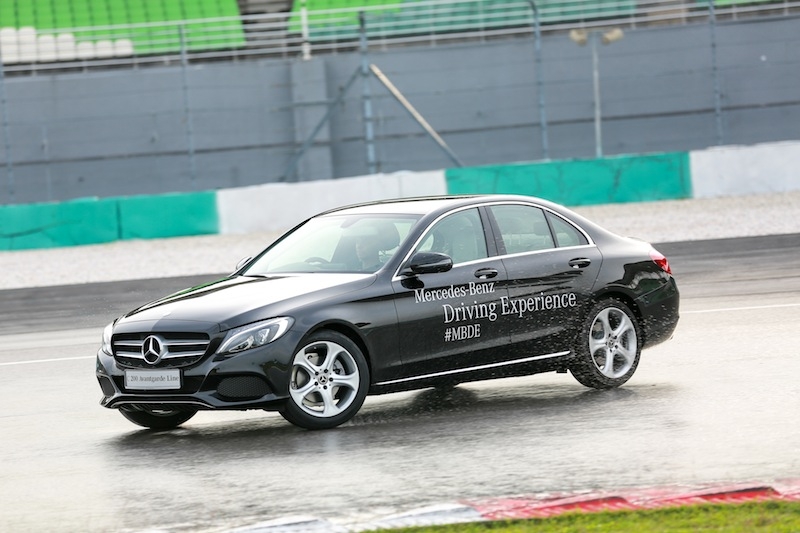 We then come to the playful part of the AMG experience: The drift party, at turn 1. And the cars used? A C200 - fitted with Easy Drift nylon tyre covers at the rear - AND the C63 S Coupe! Executing an impressive drift with the C200 seemed much easier though, as the amount of power being sent to the rear tyres (traction control fully switched off) felt controllable, matched with the right amount of steering and accelerator input on the driver’s part. The C63 S Coupe, on the other hand, was a real handful — watching it being done by the instructor gave you this false sense of oh-I-can-do-it-too. In reality, this beast is not that easy to tame without the traction control; instead of going sideways, everyone — yours truly included — spun the car 180 instead, leaving a cloud of smoke behind. (Guess I can now cancel any hopes and dreams of joining Formula Drift.) 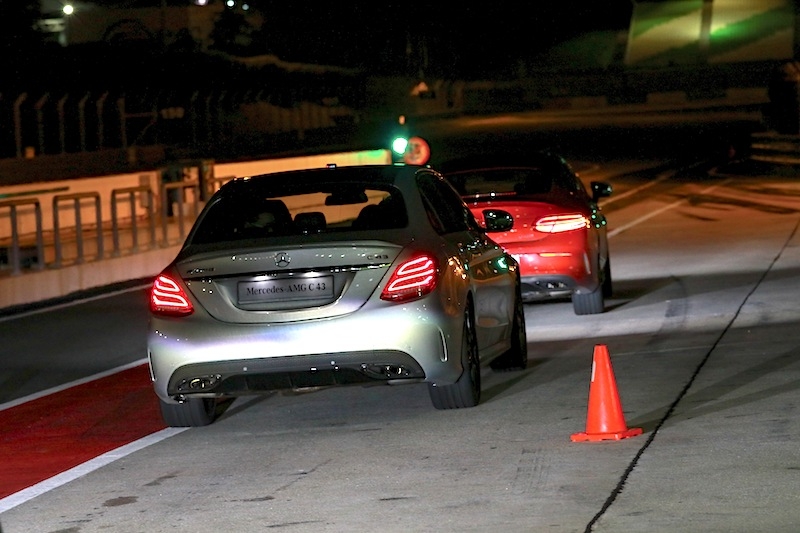 The last station of the day is the ultimate highlight of this event: Taking all the cars out for a full-on track experience. Lead by Mercedes-Benz instructors in batches, the cars were pushed to its potential; the pace was slowed down only when it started turning dark. 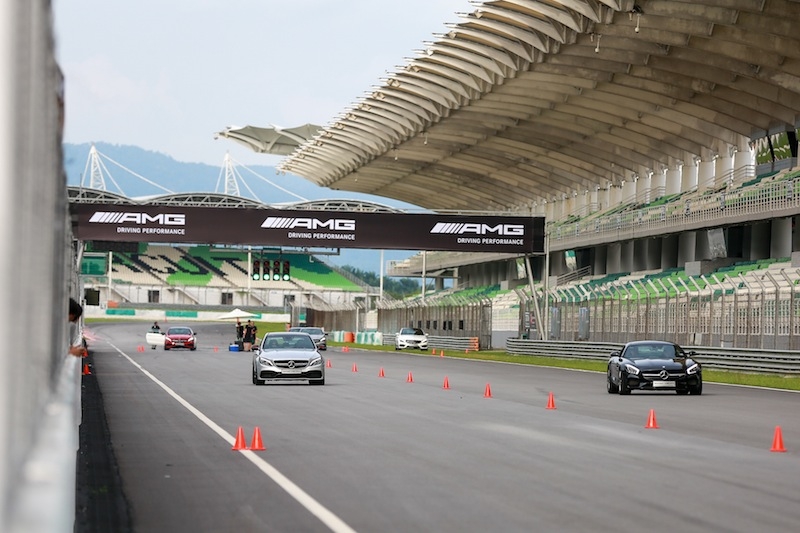 Three cars stood out for me at the end of this session. The GLC43, A45 and — of course — C63 S Coupe. Despite being an SUV, the GLC43 remained sporty, assuring and confident around Sepang; if you want a car that allows you to do the daily daddy duties seamlessly and then play track hero on weekends, this car is worth considering, really. The A45 on the other hand is a playful little car that offers tenacity, tight handling and all the right noises in one neat package — if a high performance Euro hatch is what you need, you can’t go wrong with this one. 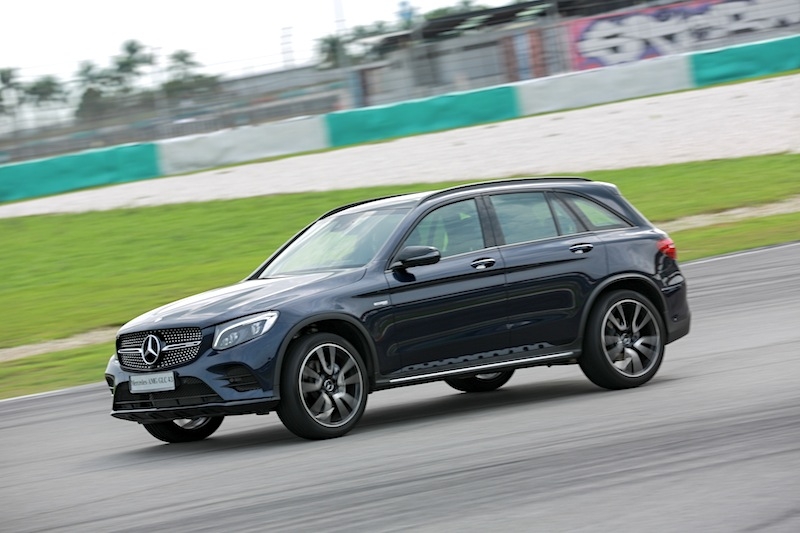 The C63 S Coupe? Ahh… It looks muscular on the outside, has a perfect cockpit, the force-fed V8 engine performs and sounds lovely; plus, the exhaust note adds more life to an already vocal car. While some might opine the handling department required more grip, I have to say this is the particular part of the car that gives it character. It doesn’t listen to your order but rather, need you to coax it. 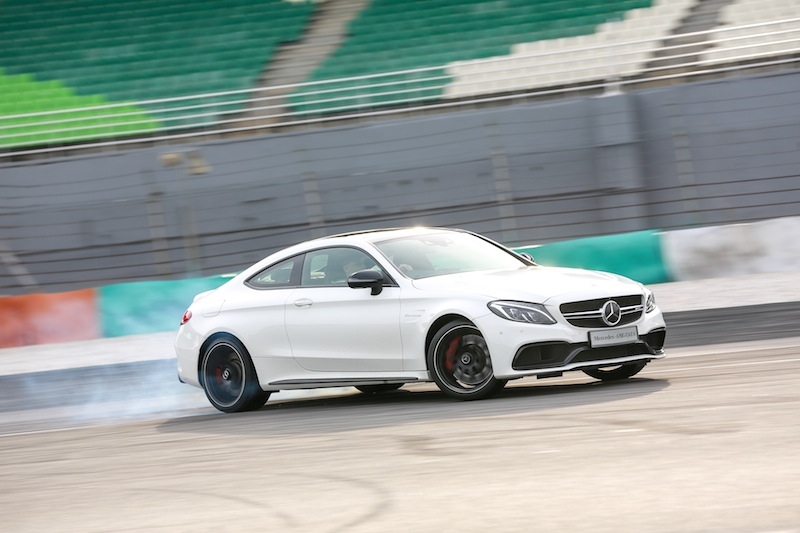 A car like this will soon be phased out in order to satisfy environmentalists and drivers who are caring less about being able to really drive, hence this is as special as it gets. 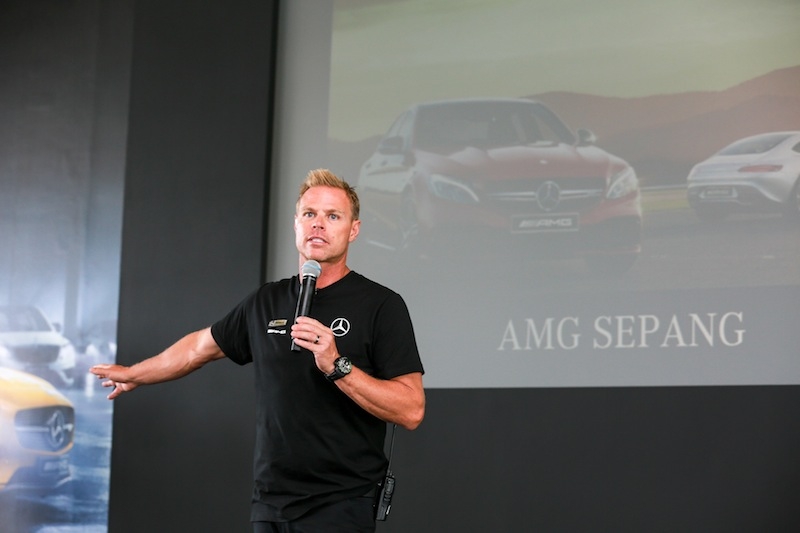