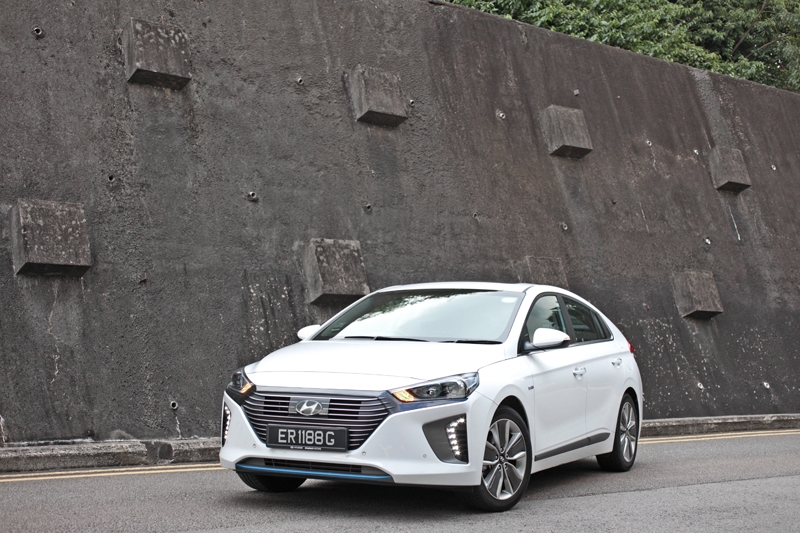 Mention hybrid and without any shadow of doubt, Toyota’s Prius will just come to mind. And this shows only one thing: How well Toyota has worked to make this the car when a driver is thinking of a green car.

Well, Honda tried taking a slice of this pie with two models. Ironically while Toyota needed only one model to make this niche bourgeois, Honda on the other hand needed the Insight and Civic Hybrid. 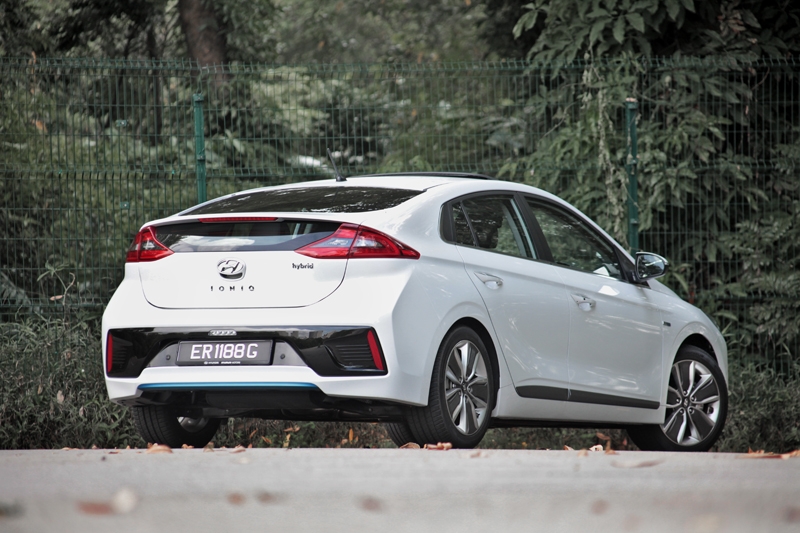 Still, Toyota leads the way and the Prius will be at the tip of every driver’s tongue — when it comes to hybrid motoring — at least for the next decade. I’ve driven the car on several occasions, and I must say Toyota deserved it. 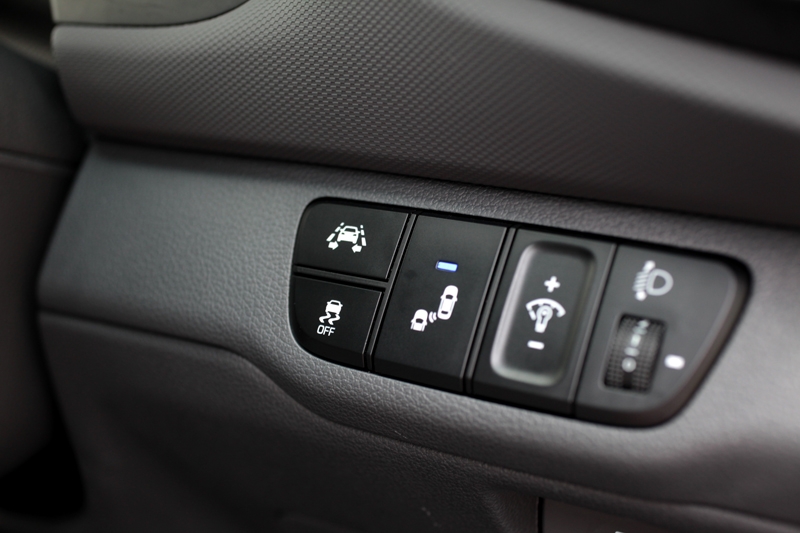 But recently though, Hyundai handed me the key to their new Ioniq. And like how the new Elantra is constantly giving the Corolla Altis a hard time, in the hybrid segment, the exact competition is taking place. 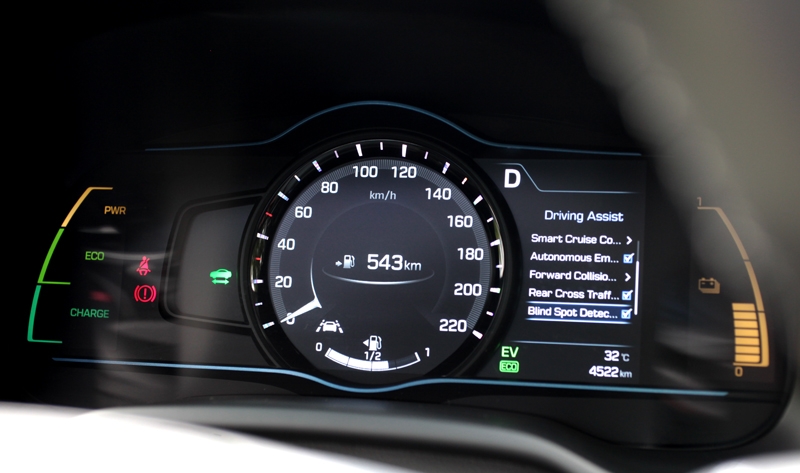 To begin with, the Ioniq comes fitted with an extensive list of standard equipment. Just to name a few, sunroof, aerodynamically-designed 17-inch alloys wrapped in 225/45 R-17 Michelin Primacy 3 rubbers, blind spot monitor, lane assist (warns driver when he is deviating out of his lane), park assist monitor, tyre pressure monitor, reverse camera, seven airbags and front seats with both heater and cooler. 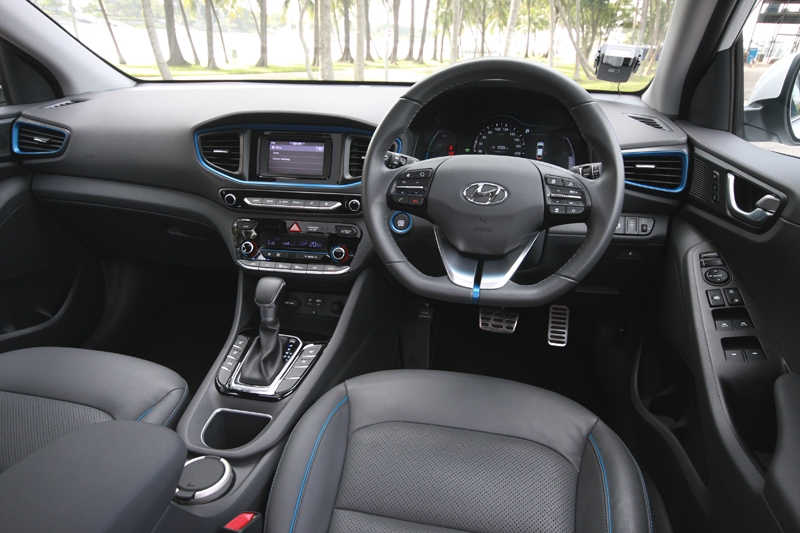 While you can’t deny the extensive use of plastic throughout the cabin is nothing much to shout about, the way everything is solidly put together along with idiot-proof control buttons goes to show how Hyundai had put in a lot of effort to make the Ioniq a car that would impress. To give it a premium touch, you get leather wrapped flat-bottomed steering wheel, seats and door panels. And then to make it less somber, you get blue accents - no pun intended - on the dashboard, steering wheel and also seats. 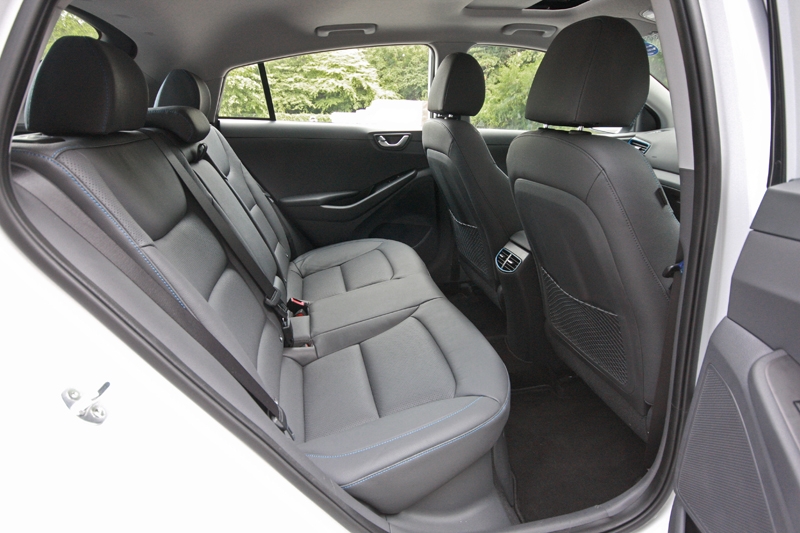 Speaking of seats, what you get in the Ioniq are all comfortable items, providing adequate support. The rear is able to accommodate up to three adults with ease; the almost flat floor should make longer trips bearable even for the - ahem- lucky one seated in the middle. 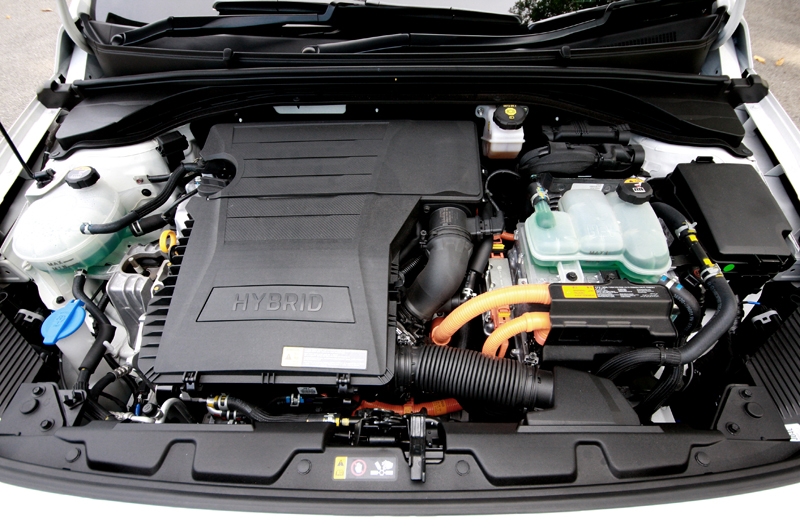 Powering the Ioniq is Hyundai’s 4-cylinder, 16-valves 1.6-litre GDI engine paired to a 6-speed dual-clutch transmission. With this combo, power output is 139 bhp with maximum 147 Nm of torque available at 4,000 rpm. And of course this being a hybrid, just like the Prius, the Ioniq has an extra 32 kW electric motor powered by a 1.56 kwh battery. 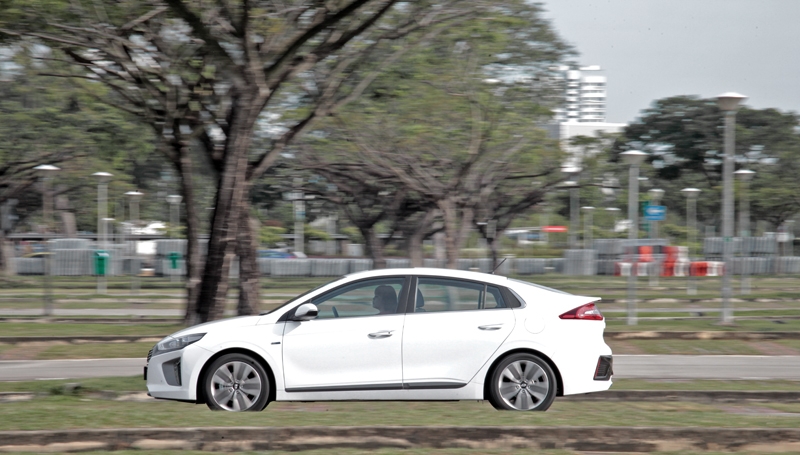 At low, parking-lot driving speed, the Ioniq moves in a very quiet manner; come to think of it, moving around in a car that doesn’t emit a single sound is quite eerie as you head towards the carpark’s exit. You need to get used to this if you’ve been driving a ‘regular’ petrol-driven car all your life… 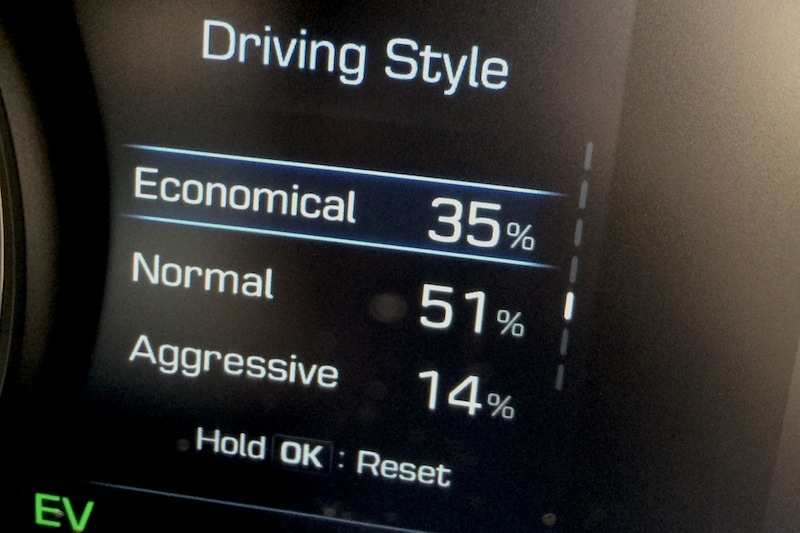 Once its petrol engine takes over the duty of propelling the car, the Ioniq comes to life, feeling like any regular family car this size. Truth is, it feels light-footed and willing to pile on the revs, although anywhere near the 5,000 rpm mark onwards you could hear the engine sounding a little strained — to be fair, it could be due to the engine still running in. However to turn your attention away from noticing that little issue, additional help - courtesy of the electric motor - when you’re seeking more power to outrun those pesky pseudo hot-hatches sure puts a wide grin on your face. (Plus a sprinkle of sinister laughter.) 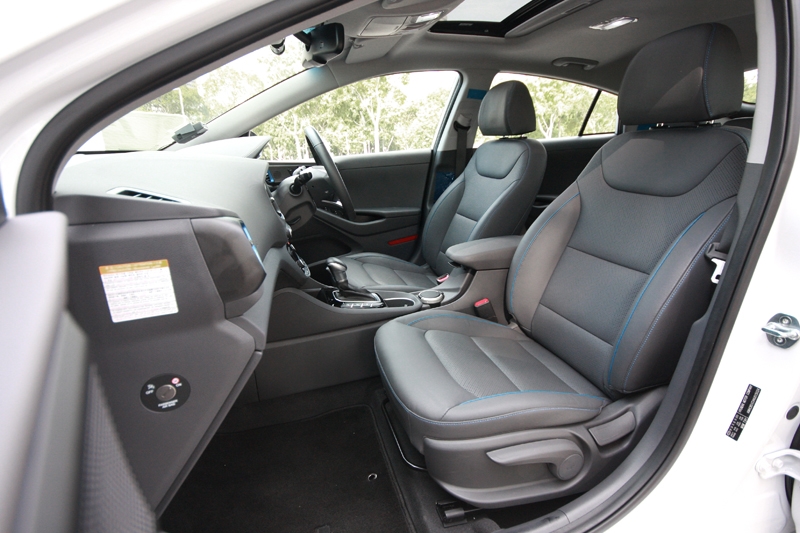 On the expressway, the refinement level of this car could put some bigger cars to shame. On top of the well-balanced chassis that delivers a good balance of sportiness and comfort, the cabin is well insulated against wind, road and tyre noises. The chief engineer in charge of the Ioniq, I reckon, has OCD; hence the attention to details that makes drives from one end of our island to the other a relaxing affair. 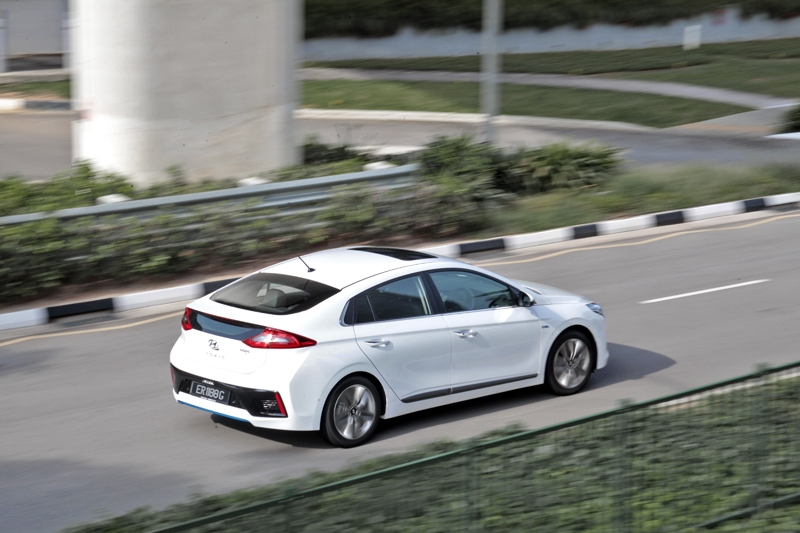 Like the current Hyundai models, the Ioniq is a trusty and neat handler whenever the - cough… cough… - sudden urge to be playful arise. The steering is responsive and alert, while the car in its entirety doesn’t seem to lack the confidence when shown fast corners or even tight bends. Well, just glad to know that a hybrid car like this doesn’t suffer from boringitis. 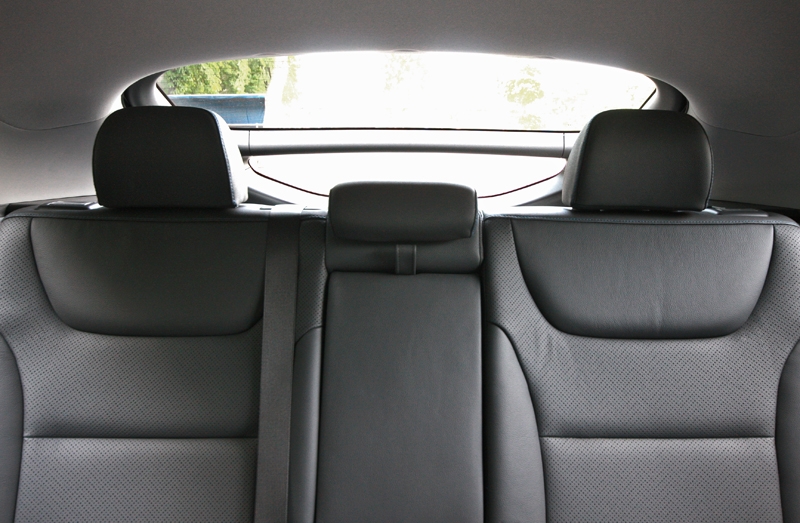 Rear split windshield needs some getting used to

At the end of the day, it is safe to say that Hyundai has given us an extensively equipped hybrid that is responsive enough for the daily grind, along with a cabin that is well thought out; surprisingly too, it’s not a bore to drive. 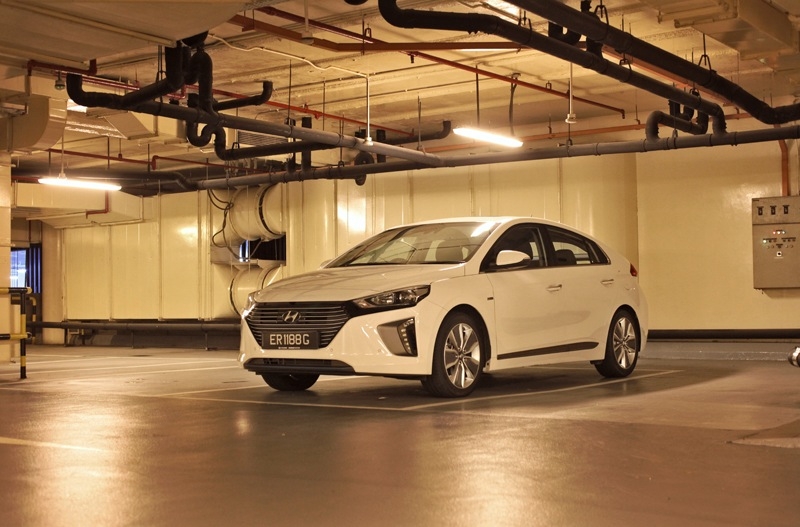 That is really a lot achieved in one car. 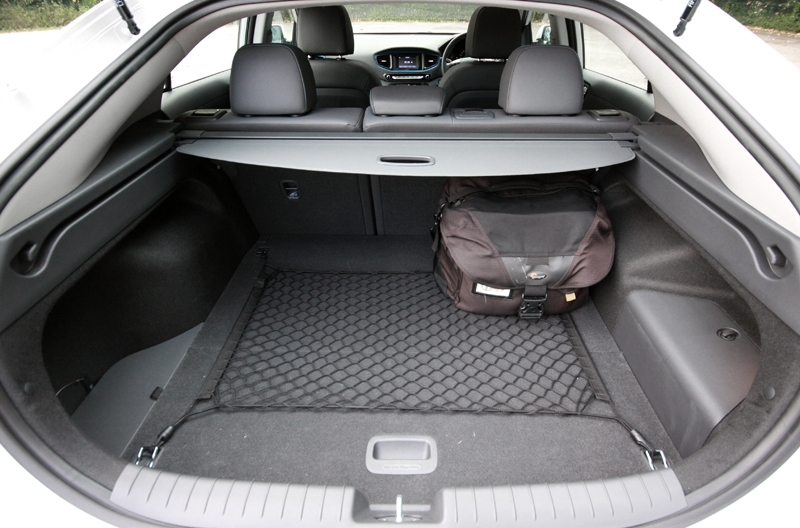 Ioniq offers 443-litres of boot space, 1,410-litres with the rear backrest stowed away; as good as the average family hatchback

You hear that, Prius?

You can choose to cool or 'heat-up' your buns 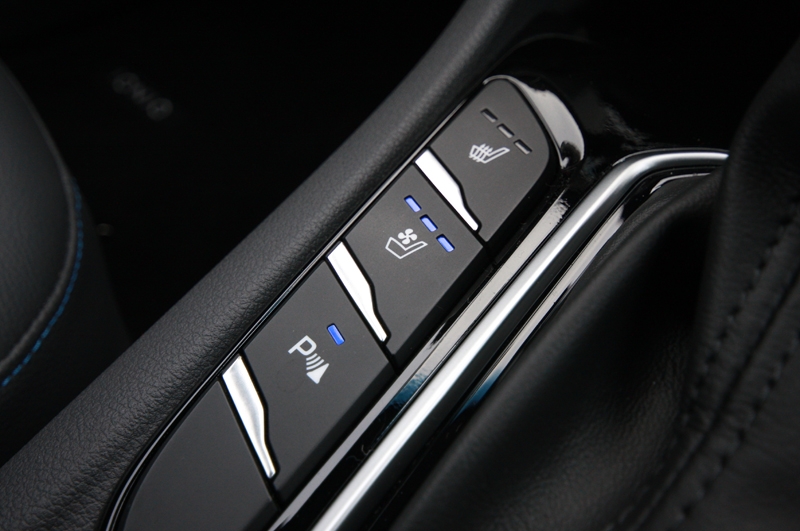 You can choose to cool or 'heat-up' your buns