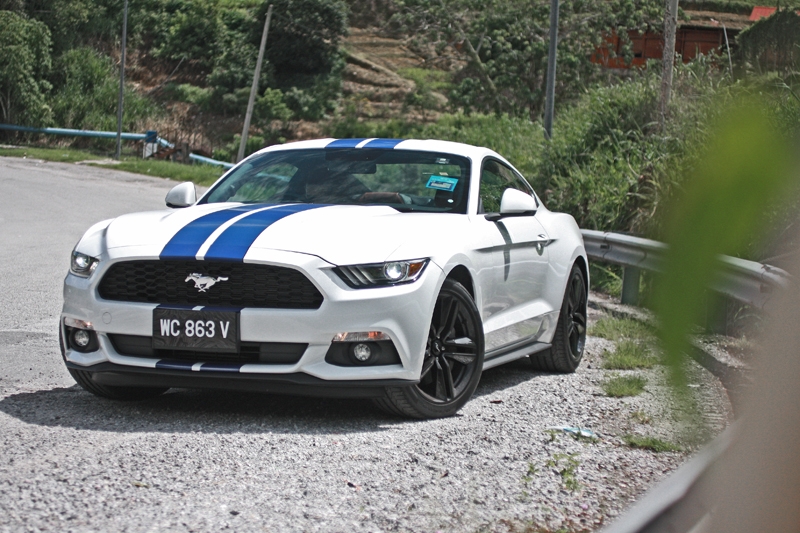 Ford Mustang EcoBoost | My (Not So) Little Pony

We went up north to sample the turbocharged Mustang in its natural habitat, and here’s what we’ve found (yieehaaw)…

There are some cars best enjoyed in its natural environment, where the roads are long and seemingly endless; then when you feel like it, just take any random exit and seek after those windy routes which then allow you to see another side of the car. Unfortunately though, our little island with its limited expressway and (majority) traffic-laden environment doesn’t really allow one to fully exploit a performance car’s ability.

Well, to be honest though, all of us here at Burnpavement.com had gotten our fair share of … ahem… run-ins with the law while finding the limits of a performance car in our possession; after all, we need to learn as much as we could and then report it for your reading pleasure. Sometimes however, getting back to ground and throwing our biasedness — because we love that certain car, what else? — proved to be a mega challenge. (Somehow we still managed to.) 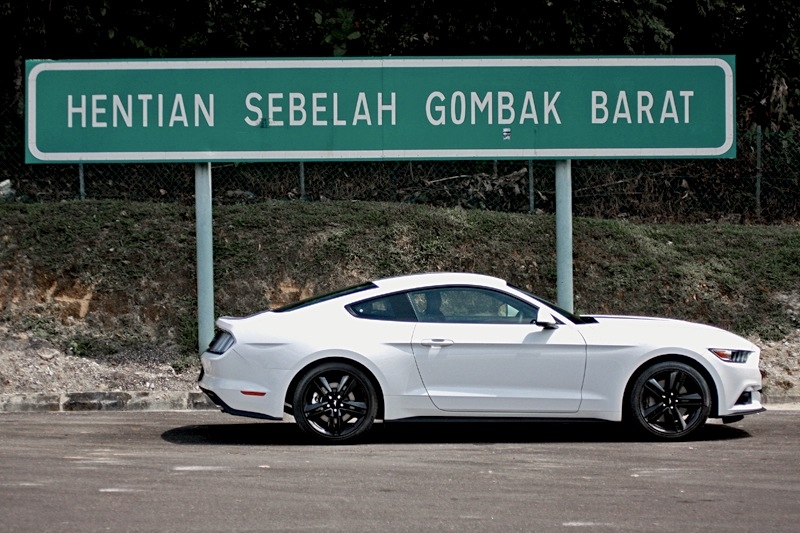 It sometimes turn into a personal debate of sorts though because no car ever built can be oh-so-perfect. After years of writing about cars, flaws could even be found with a, say, BMW 7 Series. On a separate occassion, it could be surprising how a simple Seat Leon proved to be a wholesome car. Without elaborating any further, I am sure you readers are smart enough to figure out where I’m going with this.
Which was why we decided to head up to Kuala Lumpur specifically to sample this turbocharged 2.3-litre Ford Mustang EcoBoost. 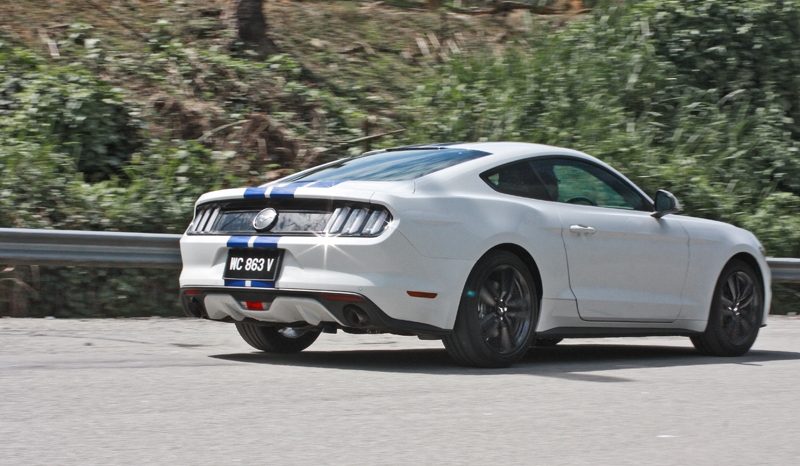 For a start, I must spell out that the Mustang remains eye-catching even in this common shade of white; firstly because it retained the signature fastback silhouette we’ve all seen on TV shows while growing up, so there’s that instantaneous association at the mere sight of it. Secondly, it’s that twin blue racing stripes running from the back all the way to the front of the car; something popularized by American muscle cars — again — we’ve been seeing on the telly. 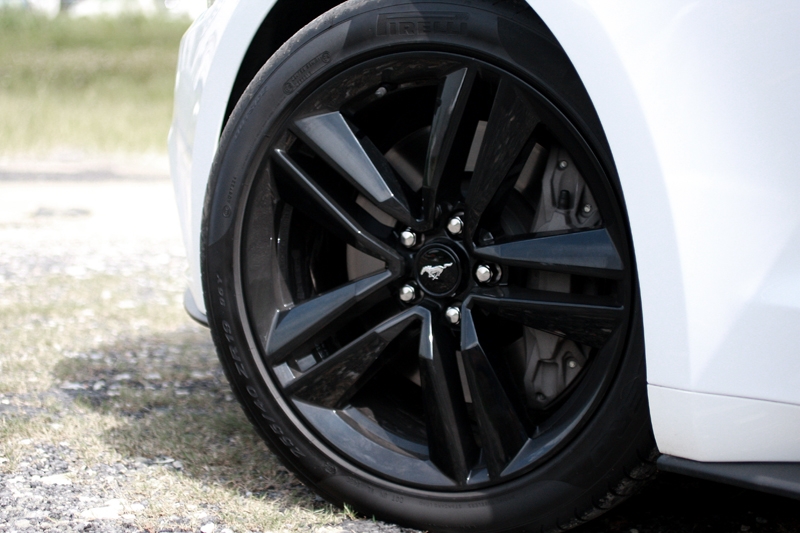 And because the Mustang has the right bulge on the bonnet and pronounced shoulder lines flanking it, the car looks properly muscular. If you were to put an A5, 4 Series or C-Class Coupe next to it, the German trio looks “underweight”. For once, the Americans deserve a big round of applause for doing it right and also making it way different from the crowd — after all in a crowded segment where buyers don’t put much emphasis on performance (as before), it’s the aesthetics that pulls in the cash… 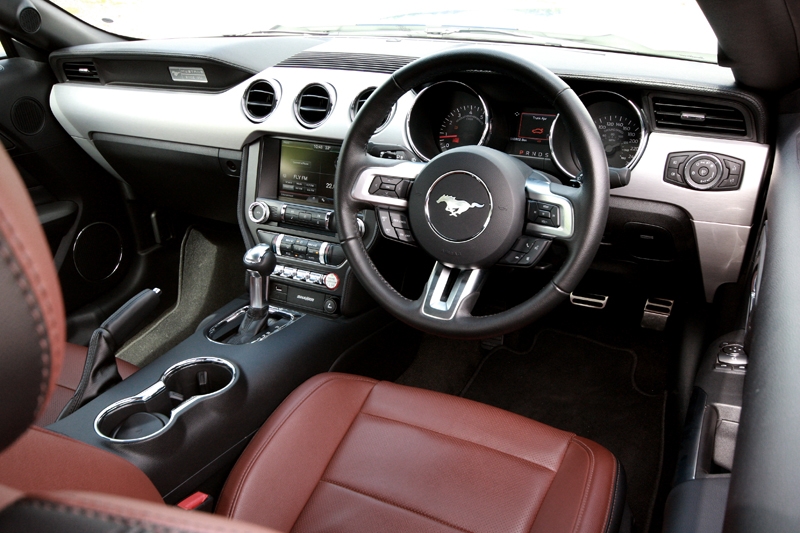 Inside, the highly American flavor continues. It’s the same layout and vibe you would get from a, say, Chrysler 300C or even Jeep Cherokee. Nothing adventurous, so to speak. Ahh… Finally a fault. Don’t get me wrong for nit picking — as I’ve mentioned in the first paragraph above, it’s part of the job.
The steering wheel errs towards the bigger side of things along with too much controls fitted onto it, tactility and feel of some of the control buttons seem no much different than a Fiesta’s and the airplane-like switches is not visible when you’re driving in the day with the sun shining brightly. Until you’re familiar, there were instances I accidentally switched off the traction control while attempting to swap the steering mode from Comfort to Sport. Also, more is expected with regards to build quality. 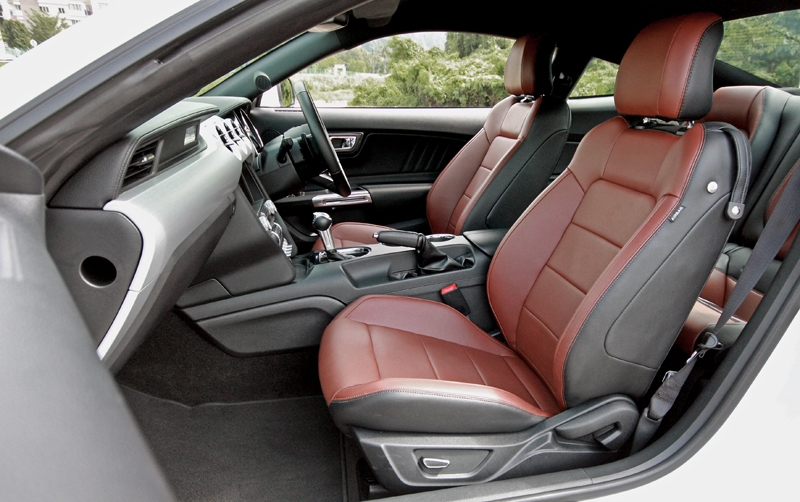 Gladly, the seats are comfortable and supportive at the same time; unlike some of the German models, it didn’t need much adjustment to find my optimal seating position; keep in mind I’m slightly chubby and stand 1.68-metres tall. Better still, Ford was generous with the air-con vents, pampering everyone in the cabin in our humid climate. 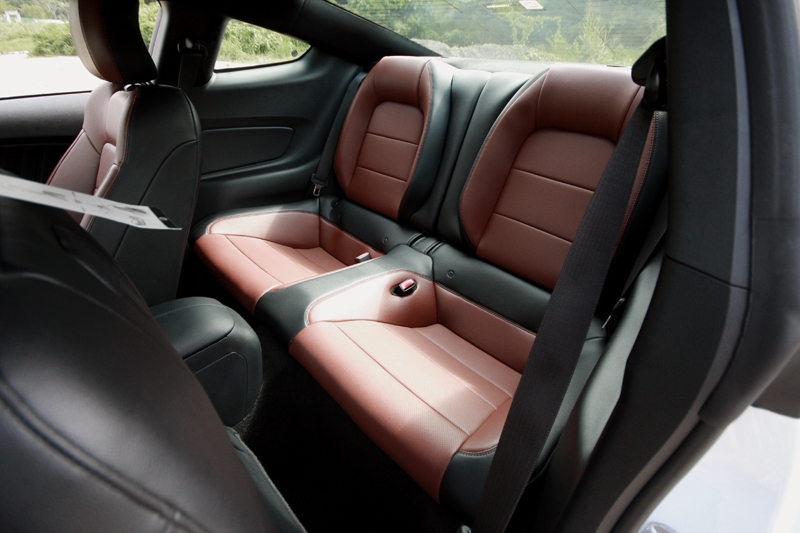 While the rear can accommodate two, it is best to limit it to just young children and pre-teens. Average-sized adults could still sit back there, but it’s best to just limit it to short journeys — any further and there’s that risk of you hearing "are we there yet?!" repeatedly. Or if you want to just irritate that annoying brother-in-law… 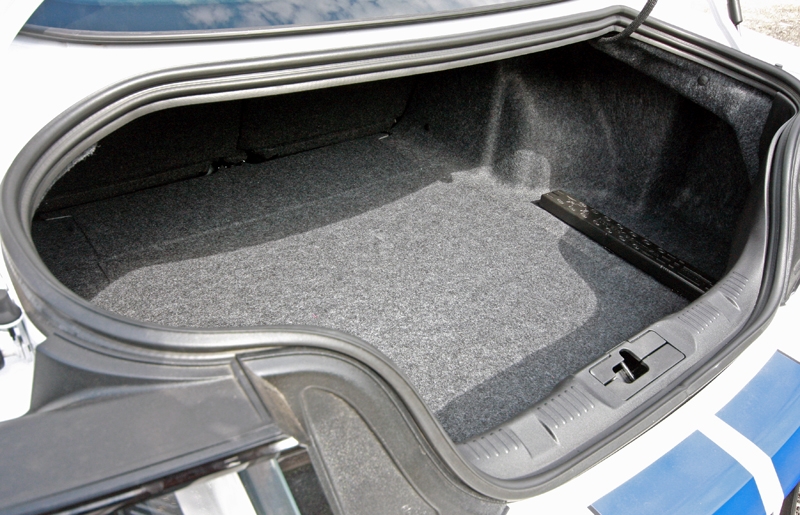 In terms of boot space, the Mustang can’t match up to the German offerings; while the C-Class Coupe offers 480-litres, the 4 Series Coupe 445-litres and new A5 Coupe 465-litres, the Mustang here only has 408-litres. Then again, it should be sufficient to carry around up to two suitcases for a week’s road trip. 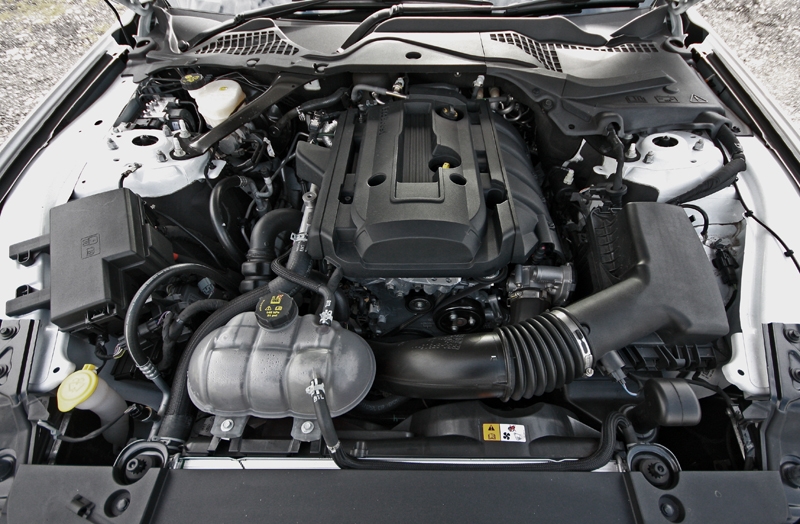 Now here’s the other important bit of the car. Power comes courtesy of a 2.3-litre turbocharged engine that is mated to Ford’s 6-speed SelectShift automatic transmission. With this combination, power output is some 312 bhp while maximum 432 Nm of torque is available from as low as 3,000 rpm. Standstill to 100 km/h is executed in only 5.5 seconds while top speed is limited to 250 km/h. 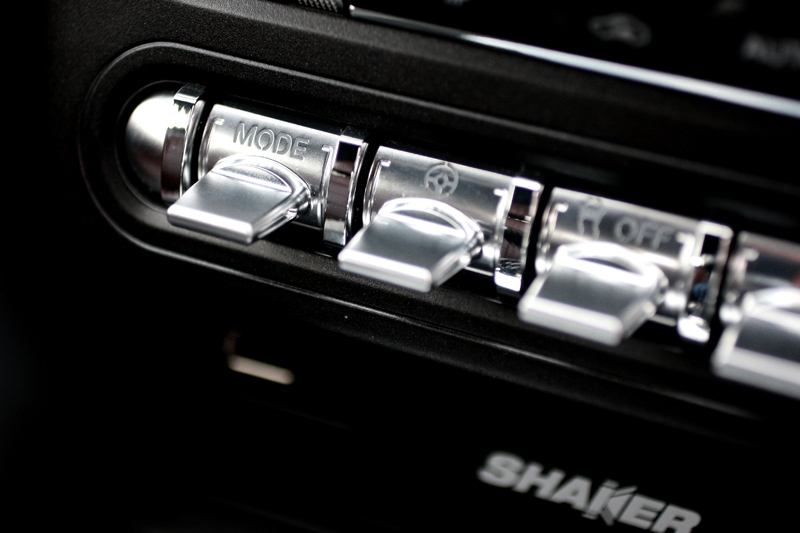 Driven in the city, the Mustang seems to prefer taking things easier. There’s no point trying to floor the accelerator here; just when you feel the turbo about to spool, suddenly traffic comes to a bloody standstill. You won’t get the instantaneous explosiveness of the Golf GTI; to give you an even better idea, it felt exactly like an automatic WRX. 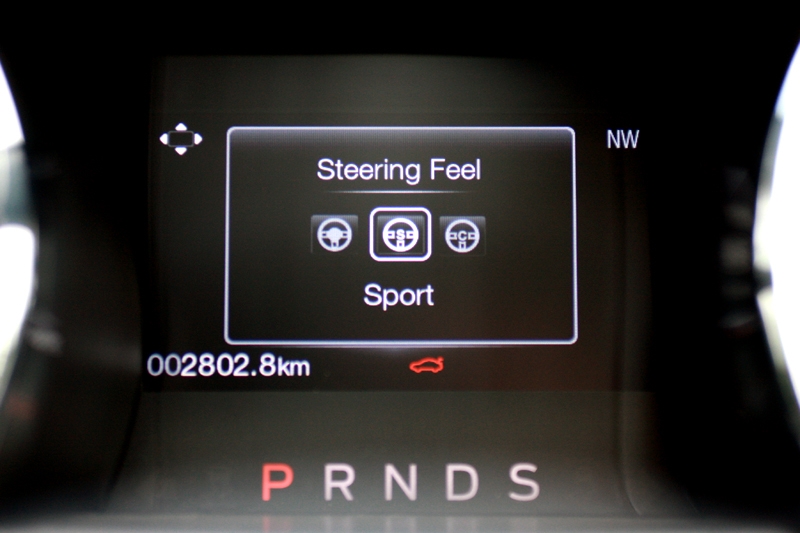 But oh boy, things change rapidly that moment the road opens up. At the blink of an eye, you’re already wayyy past the legal highway limit, charging down the fastest lane with gusto; and because it has a wide stance plus intimidating face, traffic ahead will give you the right of way. Mind you, this is still in the Mustang’s default mode. 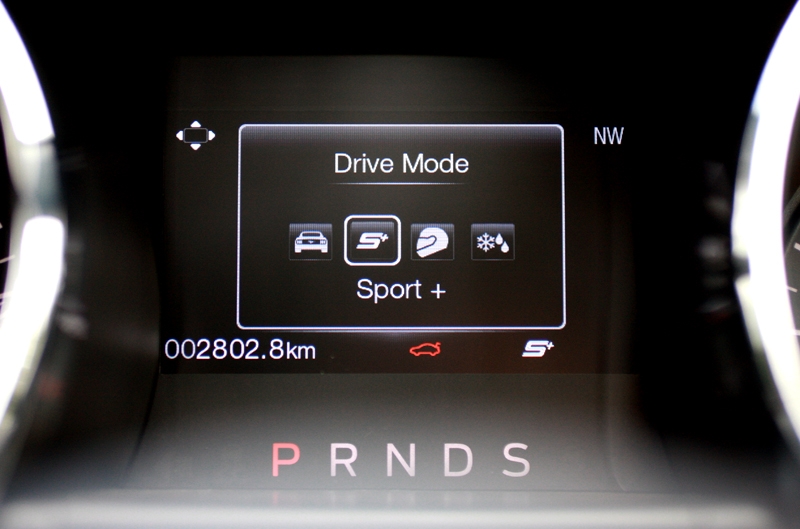 Set the car to sporty everything and the exhaust note somewhat turns up, you could feel the suspension stiffening up and the steering’s weight increase — the last part felt a little too artificial, but as you drive, you’ll get used to it. 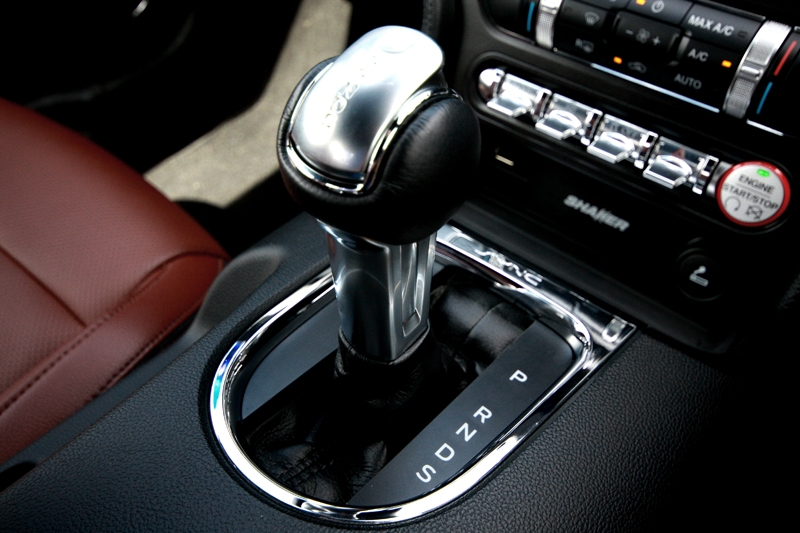 Initially, there’s nothing much to expect in terms of handling from this rear-wheel drive coupe — all that horrific videos of Mustangs spinning out of control on Youtube definitely keeping you in check. But during the drive up to Genting Highlands via Karak - where the corners can be notoriously tight when you least expect it - the car held on without any threat of kicking the rear out. In fact, it had no problems keeping up with a German hot-hatch that was looking for a playmate up the winding road. 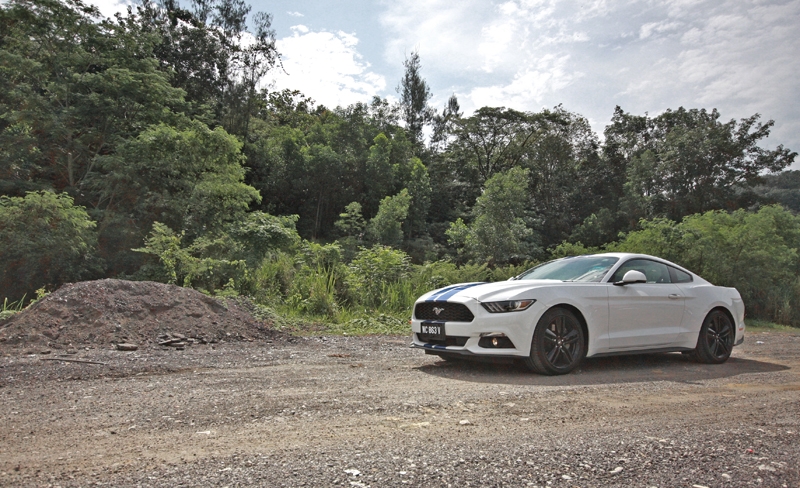 You can’t deny the sheer size of the car, and there were times it needed more steering input than usual just to keep up with the said hot-hatch but in a nutshell, you could still trust the car to give you all that grip you needed. Body control is definitely one of the Mustang’s other strength, together with alert and responsive 4-pot anchors that did not fail at its job. 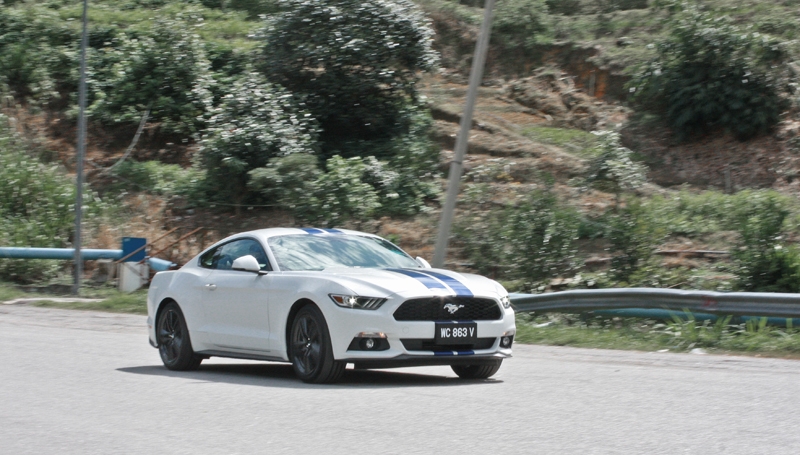 It’s a loveable car this Mustang EcoBoost. Handsome, manly and special, all in one package that anyone could accept even if the cabin needs more attention from Ford. Driving wise, power delivery out in the open doesn’t deserve any complains and the - well, surprisingly - trusty handling completes this car.
I’m looking through the brochure and I already have my colour and options all figured out…