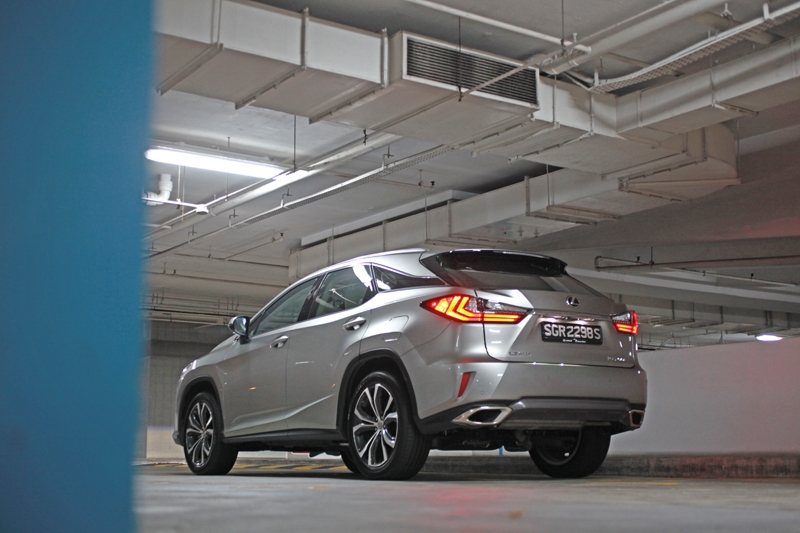 Despite being a pioneer in the luxury SUV segment, the Europeans have always given a hard fight to entice drivers - is this new RX able to lead?

This was the model that changed Lexus’s luck back in the late 1990s. No don’t’ get me wrong – Lexus was doing decently with their large sedans all thanks to local drivers who always have a soft spot for Japanese quality and reliability, but when the first-generation RX arrived, a long queue was formed immediately outside the local showroom. Mind you, this whole ‘luxury SUV’ started by an unlikely Japanese was well ahead of the Europeans and their brigade consisting of the BMW X5, Volkswagen Touareg, Porsche Cayenne, Volvo XC90 and even Audi Q7.

It might have gotten an exterior with a ‘safe’ design, and the interior may not be as luxurious as the BMW’s, but nevertheless Lexus lead with its refinement and smoothness, both also representing the brand’s core. From then on Lexus improved each generation of the RX, and that lead to even better sales figures; yes, despite the presence of the European competitors. 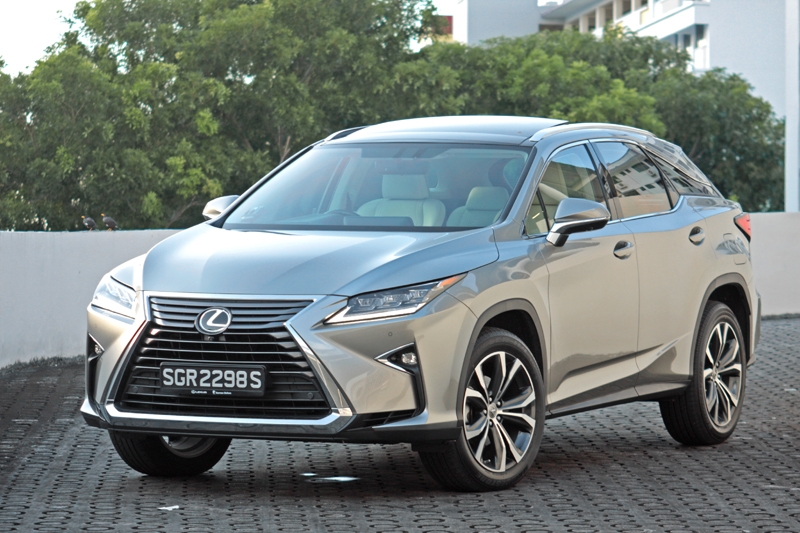 Suddenly along came this new RX, which is a definite far cry from what it began with. Lets just focus on the exterior first — a radical and ferocious face that could scare road-hogging gits. Just look at the amount of details, how the slit-eyed headlamps, one-piece spindle grill with chrome frames, creased bonnet and stylishly designed foglamps all seem to come together brilliantly; compare it to the current X5, Q7 and XC90 and I’m sure the trio look less exciting. Boring, even. 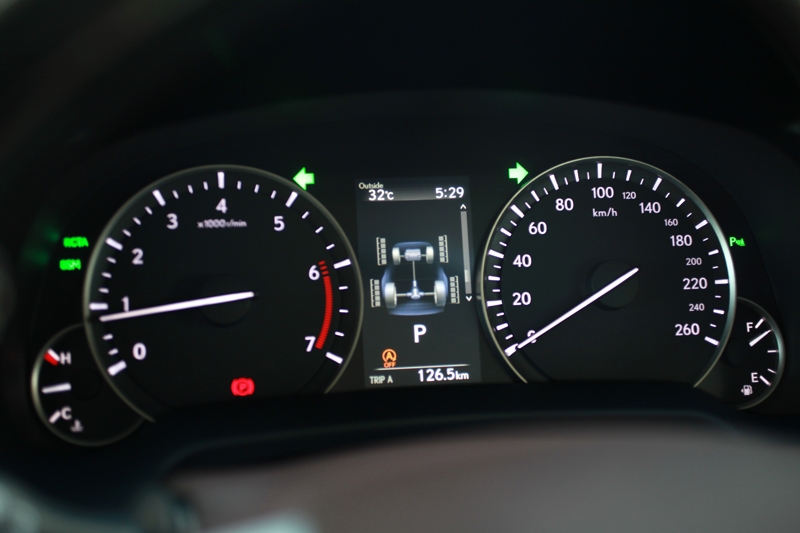 Looking at the RX200t (the entry-level model followed by the RX350 and RX450h) from the side, you surely can’t miss — again — how much attention to details were given; you see dramatic lines and bulges which, excuse me for sounding like a brochure, shows off the athleticism intended. If Lexus’s intention was to shave off the only-interested-senior-citizens-may-apply image, then they’ve done a very good job here. Even the windows’ design looks cool, especially the piece found on the C-pillar, and I reckon this would be the next trend. 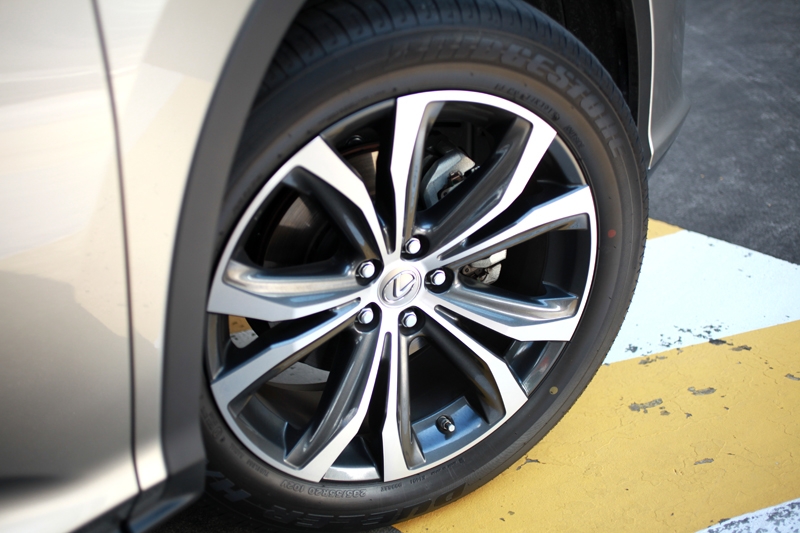 The rear didn’t seem to get much effort from the design team it seems, with it looking bulky still. A roof spoiler, along with the twin rectangular exhaust tailpipe, probably inspired by Lamborghini’s Avantador; a nice touch as no other SUV has such a detail. Lexus’s attention to detail continues on with the set of supersize me 20-inch alloys wrapped in 235/55 R-20 Bridgestone Dueler H/T rubbers. 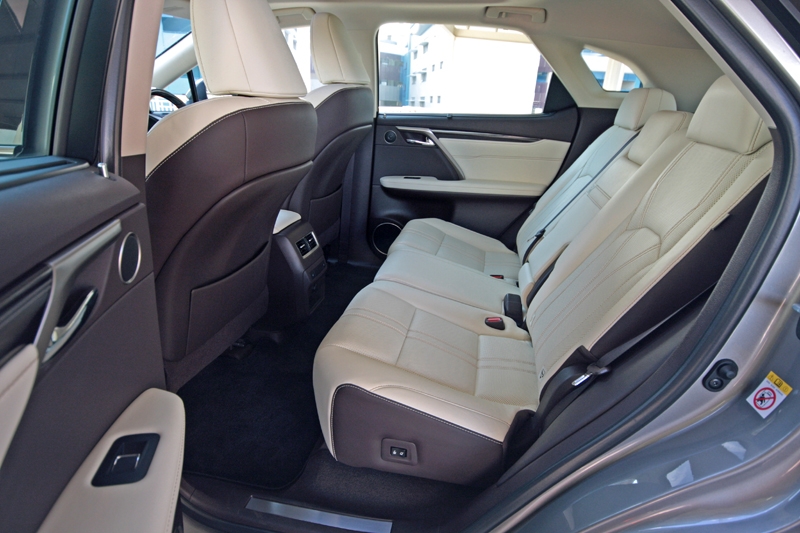 A large sunroof comes standard here, and that feature goes a long way in giving the cabin an airy feeling. Not that it’s cramps in there; in fact, far from that. As previous RXs, the cabin has more than adequate room for up to five adults to travel in comfort even over longer distances (ISOFIX points also comes standard). Better still rear passengers get to choose the angle of the backrest that compliments the highly comfortable architecture of the seat. 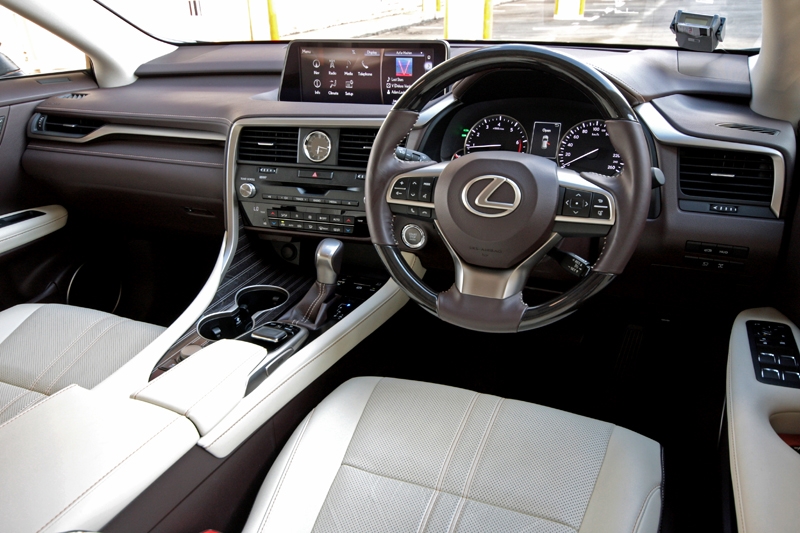 The entire dashboard does come across as cluttered no thanks to the myriad of climate control and radio buttons — given time, the driver should be able to get used to it though. Driving position is exemplary in the RX200t although it must be said smaller-sized drivers would require more support to feel cosy. The steering wheel is brilliantly sized and as the current trend, comes with convenient controls for audio, cruise control and trip monitor. At the same time, Lexus made driver and front passenger’s seats come with both butt warmer and cooler — in our climate, the latter is a highly welcomed feature. 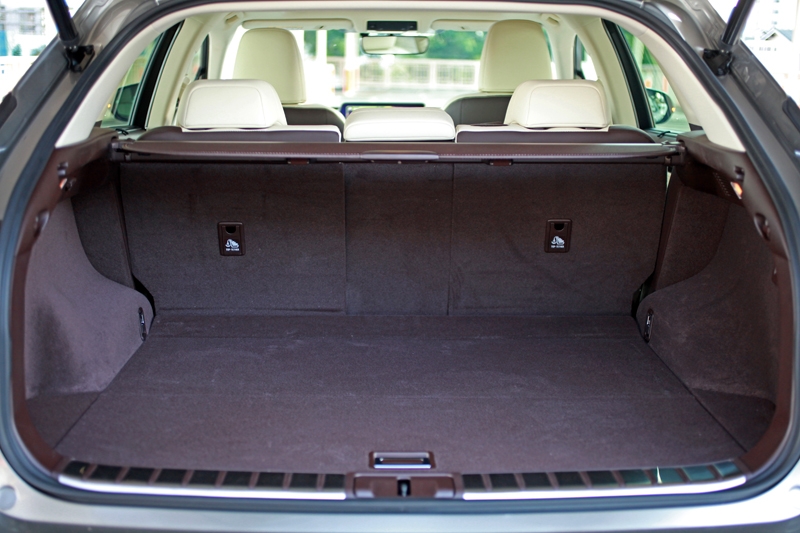 Bootspace is nowhere bigger than the X5, XC90 and Q7’s as it doesn’t come with a third row seat option like the trio, but the 466-litres available is more than enough for daily tasks. Fold down the rear seat and it expands to 1,592-litres — brilliant for furniture shopping days. But the sloping roofline and intrusive tyre well does mean ferrying bulky items may require the service of a goods van instead. 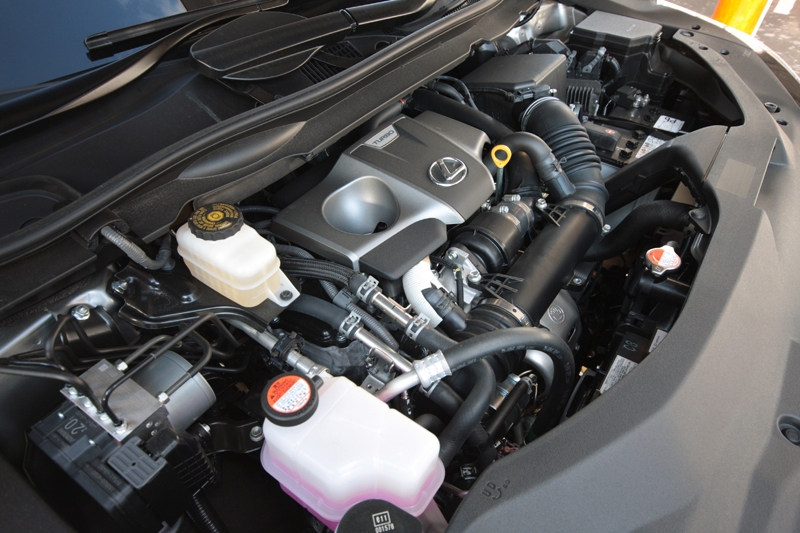 Drivers used to the grunt of the V6 unit may be disappointed as the RX200t gets for itself a 2.0-litre, 4-cylinder engine featuring twin-scroll turbochargers here (first seen in the smaller NX200t, I’ve mentioned in that review it took Lexus’s engineering team a decade to put this engine together for mass production). Paired to a 6-speed automatic transmission, available output stands at 234 bhp (@ 5,800 rpm) and 350 Nm (@ 1,650 rpm), taking 9.5 seconds to reach 100 km/h from standstill along with a 200 km/h top speed. 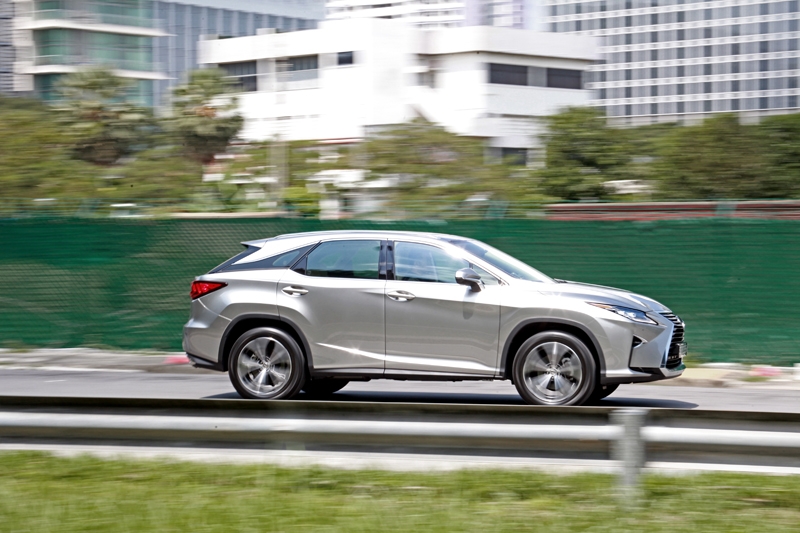 With a slightly more than 2-tonne kerbweight, the RX200t is no featherweight and you do feel the weight at initial move-off before the engine gets into its element at close to 3,000 rpm; the Q7 2.0 TFSI somewhat feels more willing in this department. Thankfully, it gets an intelligent all-wheel drive system that remains front-biased during regular driving condition — this somewhat lighten the burden for the drivetrain. And then during sporty driving, it swaps to a 50:50 split instead, ensuring this SUV doesn’t get into unwanted trouble(s). 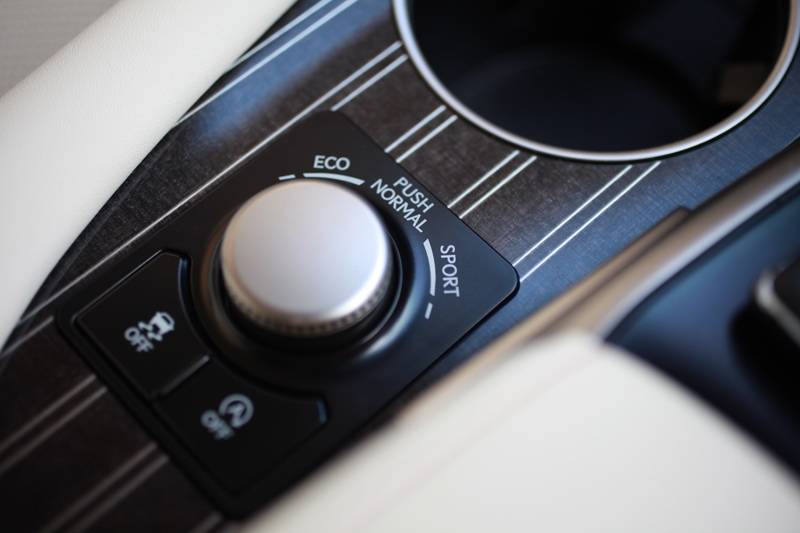 The RX200t can be driven in different modes

Speaking of sporty driving, engaging in some teenage behaviours does expose how positive the steering is on top of body movements that doesn’t threaten to scare you — if you are anticipating wobbly, silly sensations, you won’t get it from the RX200t. That said however, better UHP tyres would definitely go a long way in enhancing overall grip. Anchors are also worthy of praise taking not much effort, with no rude nosedives, to bring it to a halt from three-figure speeds. 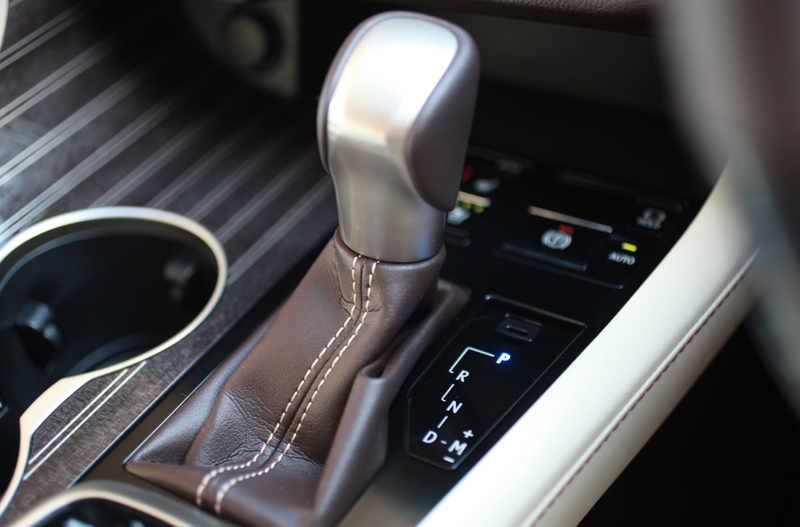 Driven normally, one cannot fault the quality and refinement provided here. Cabin is well suppressed against unwanted noise and even over badly paved roads, NVH (Noise, Vibration, Harshness) is muted from occupants. During expressway cruises, it also doesn’t require much effort on the driver’s part to overtake; surprisingly it appeared, well, effortless. 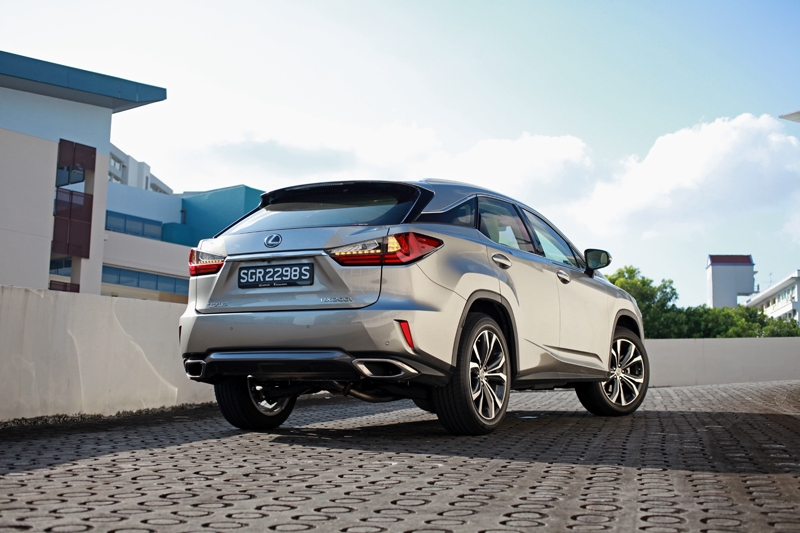 So in a nutshell, the Lexus RX200t is a showcase of (a) just how bold Lexus could get in terms of design, (b) how Lexus still is the segment’s leader in driving refinement and (c) delivering the right amount of luxury. It is hard to fault this SUV, as it seems as though the team behind the development has gone ahead in overthinking details. 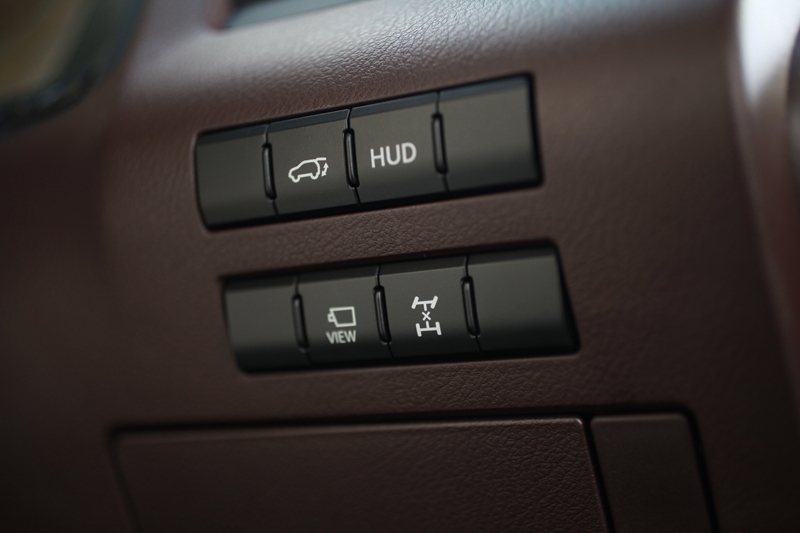 I have nothing much else to say, except this: Well done, Lexus. 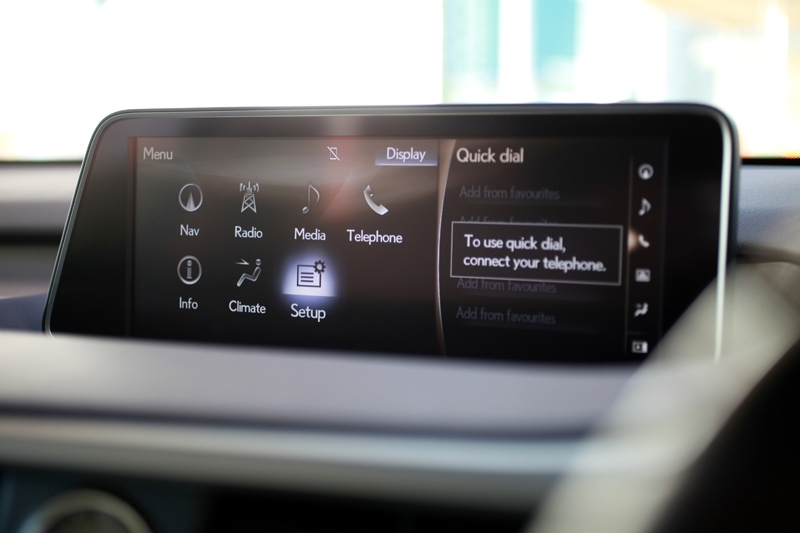 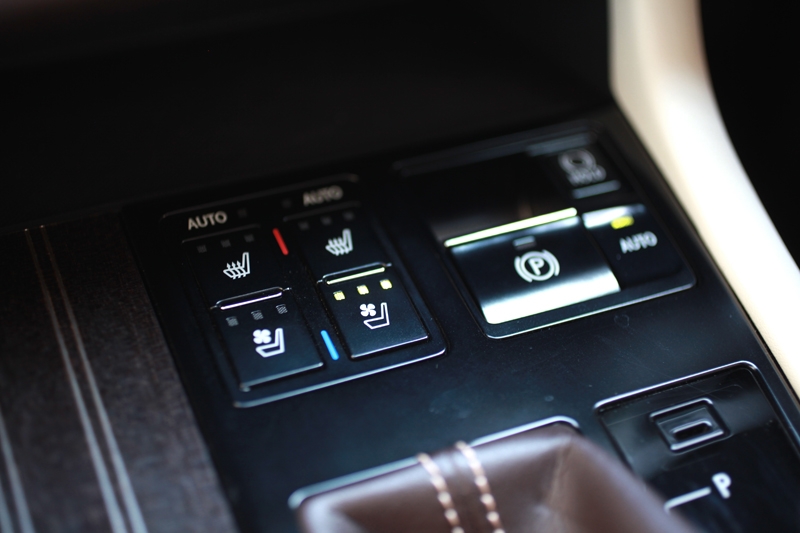