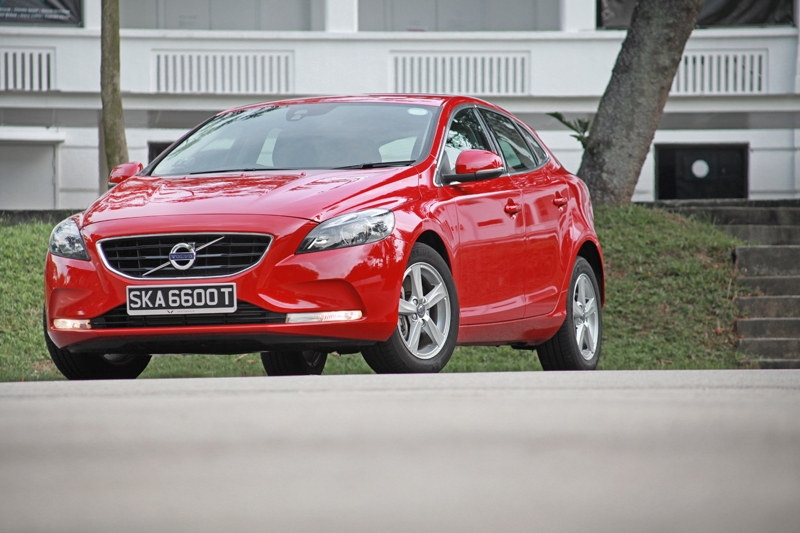 The most affordable Volvo money can buy right now, it opens the door to premium motoring — does it work like what the label says though?

There are times in life when you read the label to a certain product over and over again, but later on still realize it didn’t turn out exactly like what was put on the, well, label. If the item cost me less than $10, I would usually get over the disappointment and move on; then perhaps go to the supermarket/DIY store again later to look for the similar product, but of a different brand. Then pray as mightily as I could the previous mistake won’t be repeated.

Just like this new Volvo V40 T2. While the Swede calls it a hatchback, the exterior style clearly meant it deserves to be called a wagon instead. So for those of you wanting a hatchback with the general style of a sporty-looking pseudo wagon, this should be right down your alley. 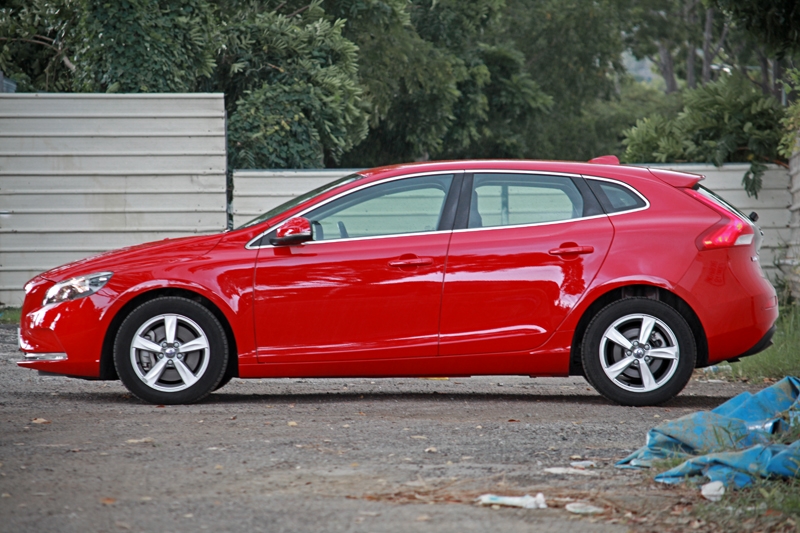 Fashion aside, lets get to the most important bit first: The interior. Measuring in at 4,369 mm long, 1,783 mm wide and 1,420 mm tall, the V40 is longer and stands shorter than the king of hatchback here, Volkswagen’s Golf — it loses out to the German in terms of width as well though. Nevertheless, the extra length translates to additional cabin space, looking at the extra 9mm wheelbase it’s endowed with. 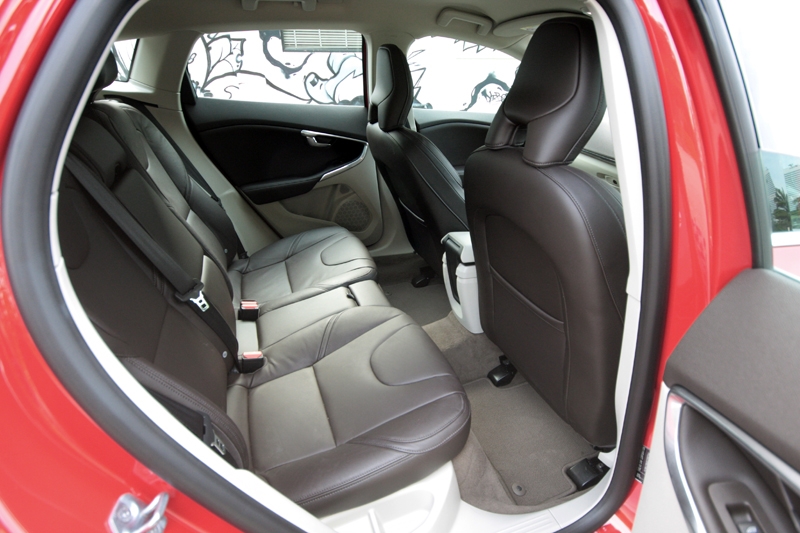 And it shows: You can sit three average-sized adults at the rear without much issue, legroom in particular deserving praise. Then because of clever architecture, everyone sits lower, cocooned in the comfortable seat; meaning taller passengers would be able to get comfy too. 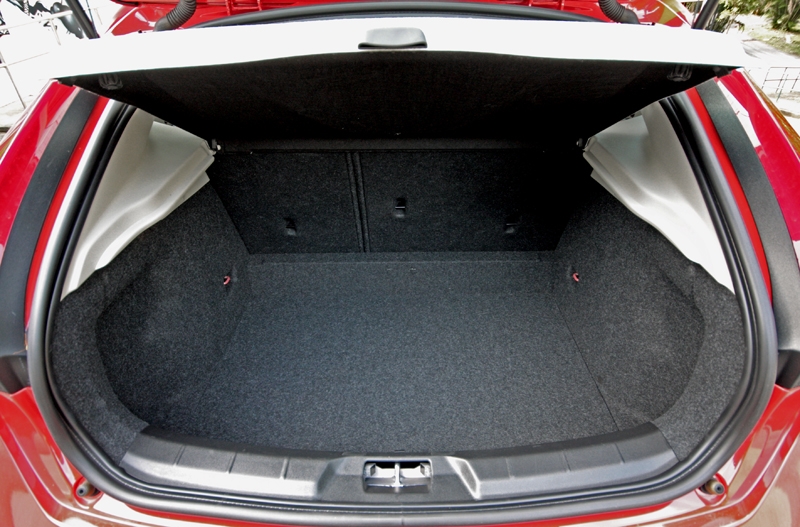 The extra legroom does come with a compromise though. The V40 gets a smaller boot; the 335-litre (1,032-litre with backrest down) worth of space seems average but when you compare it to the Golf’s 380-litre (1,270-litre), it sure is a not-so-pleasant big surprise... 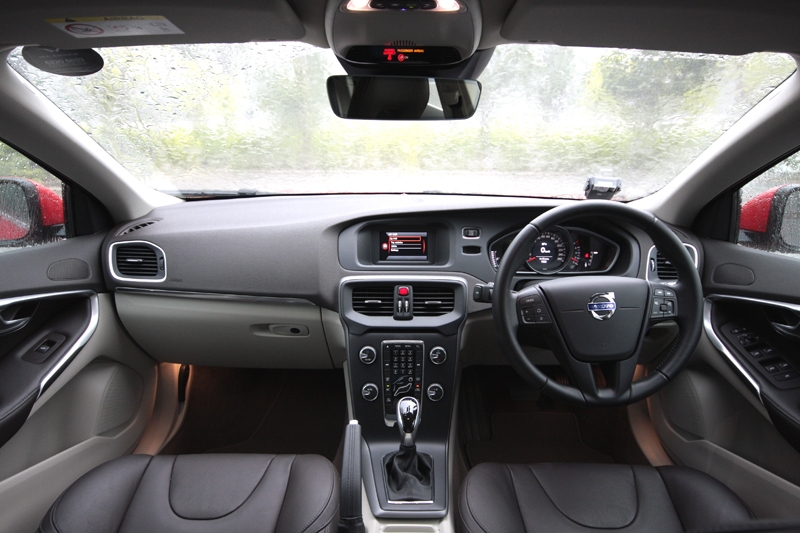 Its cockpit, if you’re highly familiar with Volvos, remains pleasant, clear and user-friendly as before. Both driver and passenger get comfortable chairs and for the driver; for the driver, pairing it with (a) the steering wheel that allows you to adjust both reach and rake, and (b) meter cluster with clear display simply means finding a commanding driving position is rather easy. Oh and by the way, faultless build quality is another Volvo forte, which is found in here. 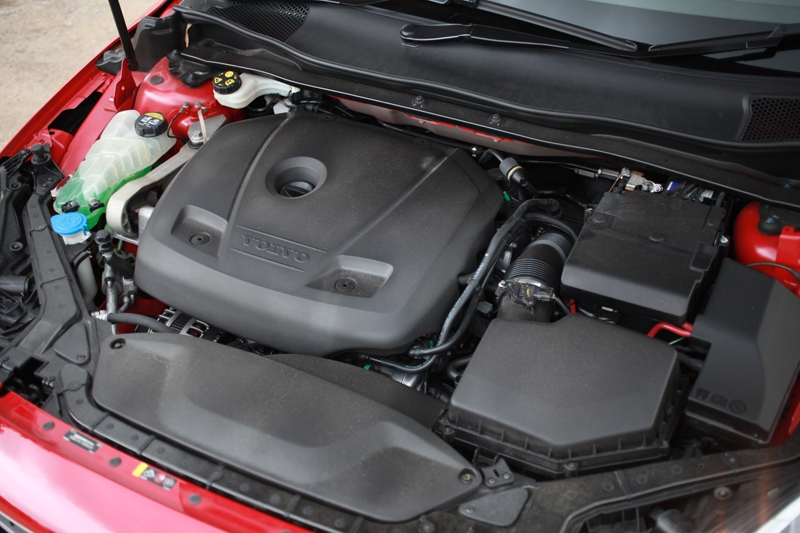 Powering the V40 is Volvo’s latest turbocharged 4-cylinder 1.5-litre engine and mated to a 6-speed Geartronic automatic transmission, power output is 122 bhp with torque at 220 Nm. Standstill to 100 km/h is dispatched in 9.8 seconds and top speed rated at 190 km/h. 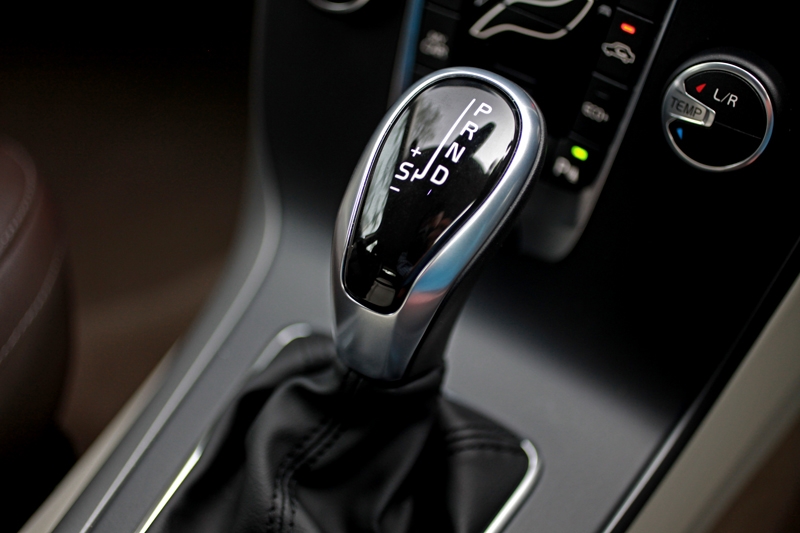 Undeniably it’s no fire-breather but it sure does its job in an efficient manner. Off the mark, you do feel instantaneous pick up with the transmission shifting up without any rude shift shocks. That said past 4,500 rpm, things start to get a little flat till it reaches the 6,000 rpm redline. 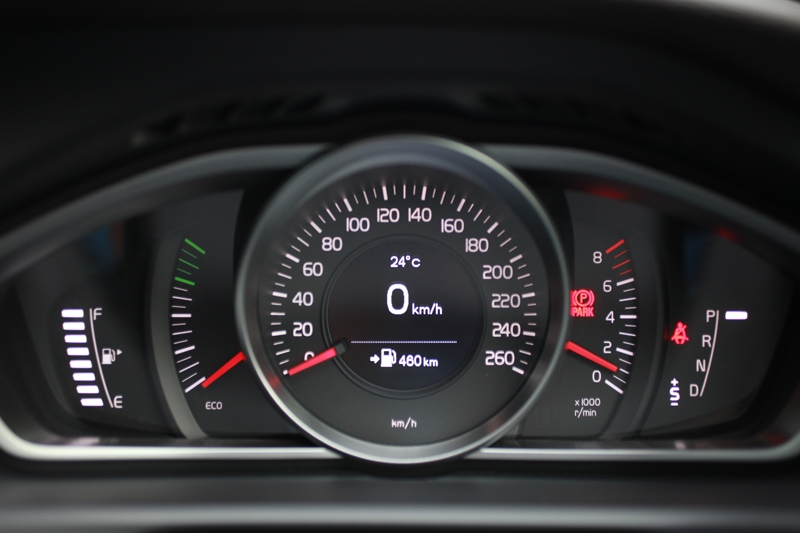 Driven out on the expressway, this car moves along in a highly refined manner with engine noise kept at bay. And even at 110 km/h, wind noise is within minimum level — good enough to put even adults to sleep. Then when you do need to overtake, there’s enough power available to the point you don’t really have to stomp the accelerator hard just to get a move on 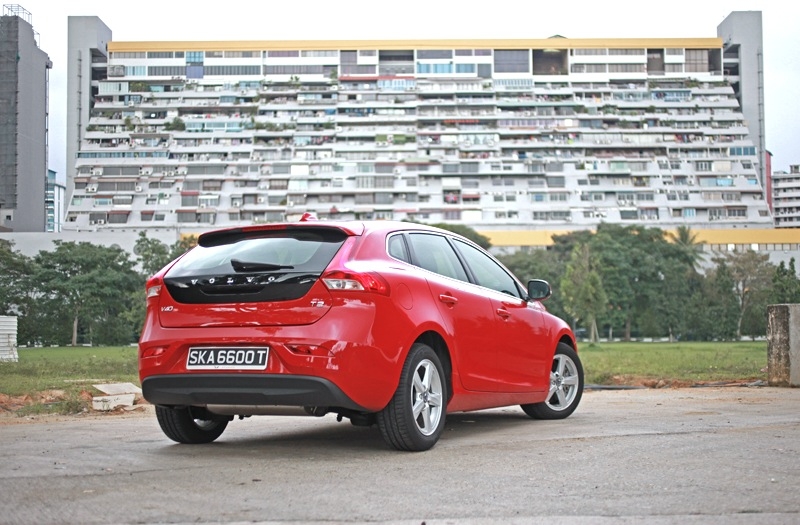 In terms of handling, this Swede remains confident and assuring with good feedback from the steering. The car’s spring may come across as ‘slightly soft’ to the enthusiastic driver, true, but it still remains balanced; like the Golf, it’s obvious Volvo wants this car to appeal to both driver and passengers, explaining why they gave it such a set up. 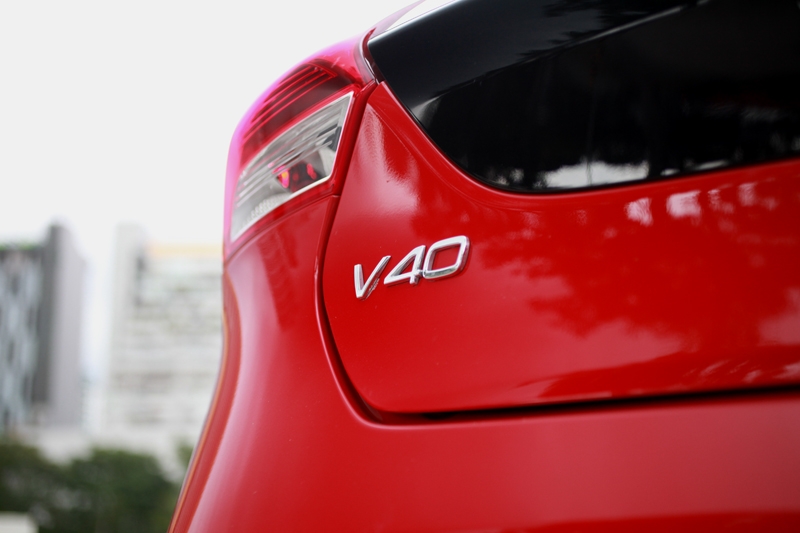 As an entire package, there’s nothing much to fault Volvo; from the engine and transmission, to the good refinement level down to the cabin, this V40 is well thought-out. While I cannot deny how the engine lacks the punch higher up the rev range, there’s adequate power from low to mid — and that’s more than useful for the daily grind here. 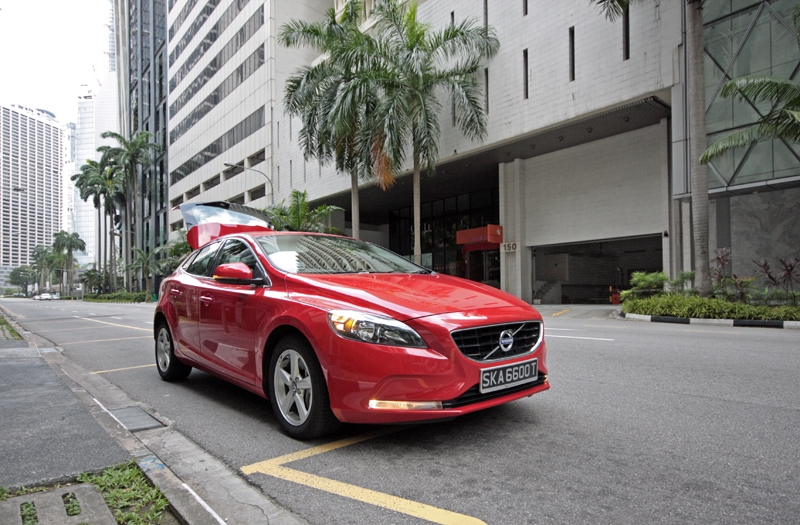 So yes, it delivers what it says on the label despite the interestingly shaped packaging... 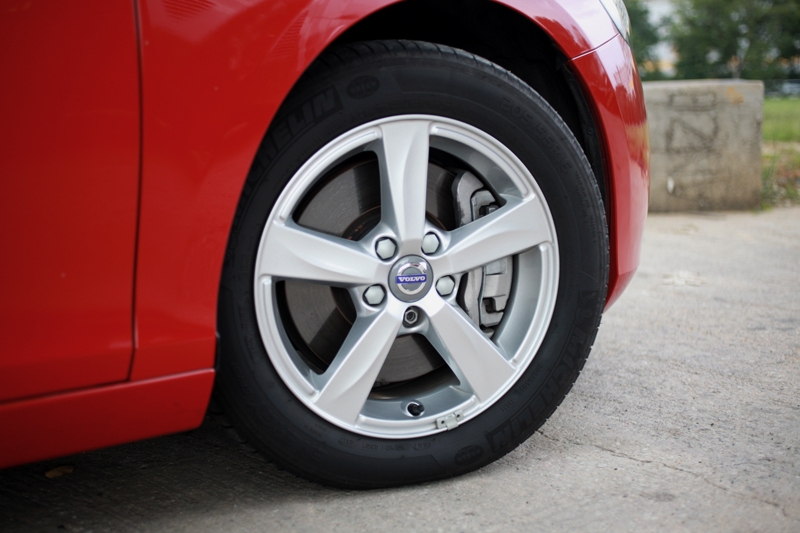 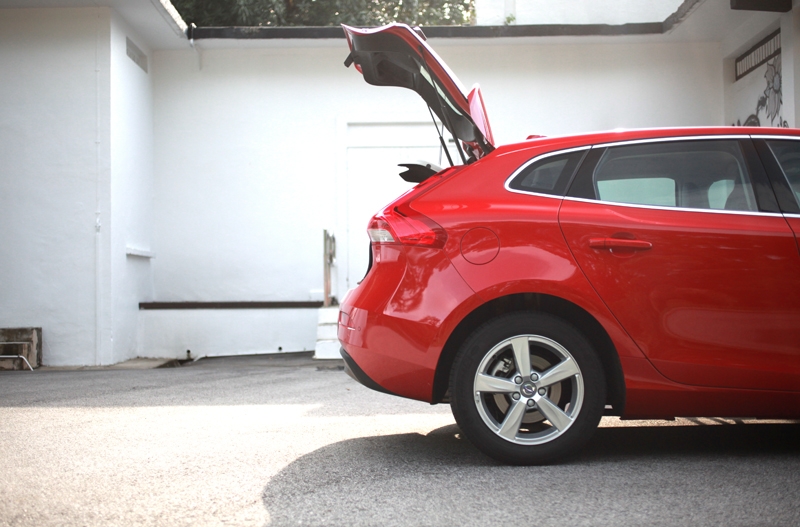 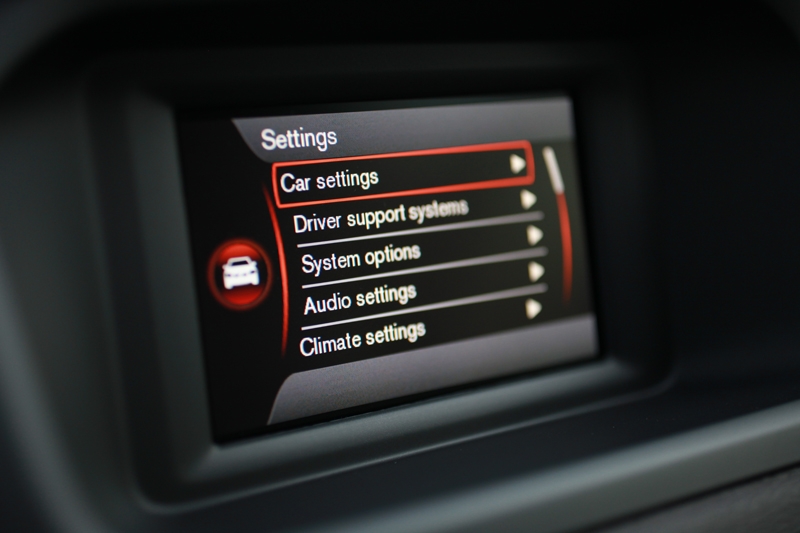 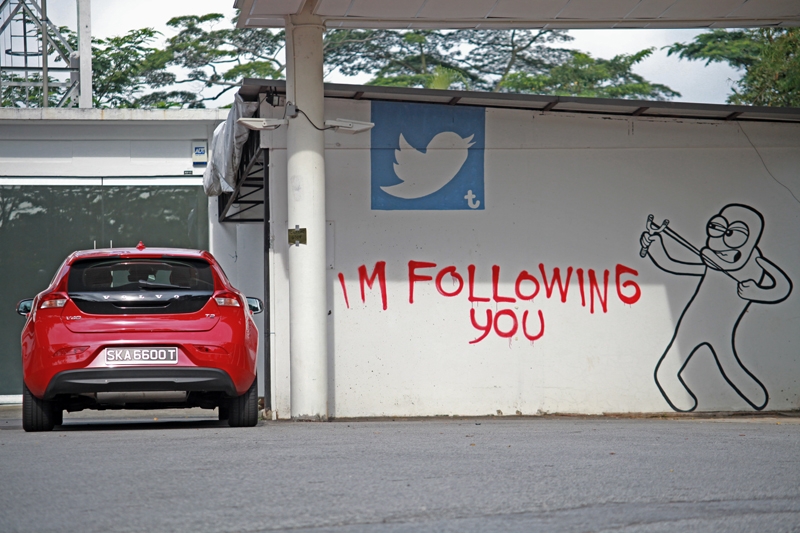