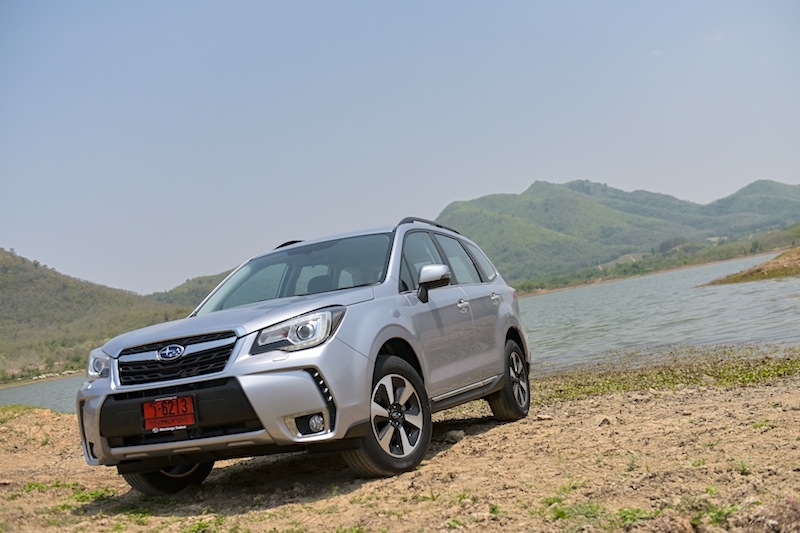 We flew to Bangkok to sample the freshened Forester

Mention the words, ‘family SUV’, and without much hesitation, I am sure Subaru’s Forester will come to mind. After all, this is the model that sold healthily every single generation; the combination of a turbocharged lump, full-time all-wheel drive and a cabin that welcomes a family of five without hesitation were its strong selling points.

For 2016, Subaru has made some changes and improvements to keep the Forester relevant. Not only that, but for Singapore, Subaru is aiming to maintain its reputable image among consumers. 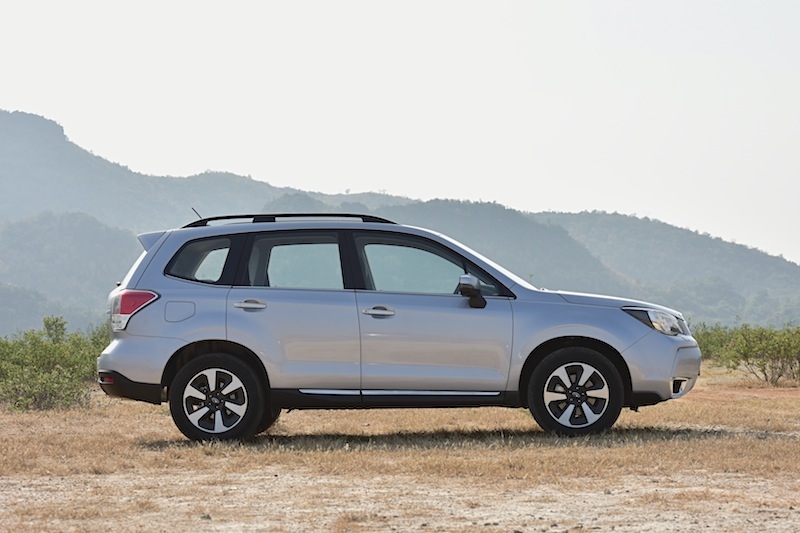 And Subaru seems very serious at proving their point: They flew Burnpavement all the way to Bangkok to sample this new Forester. 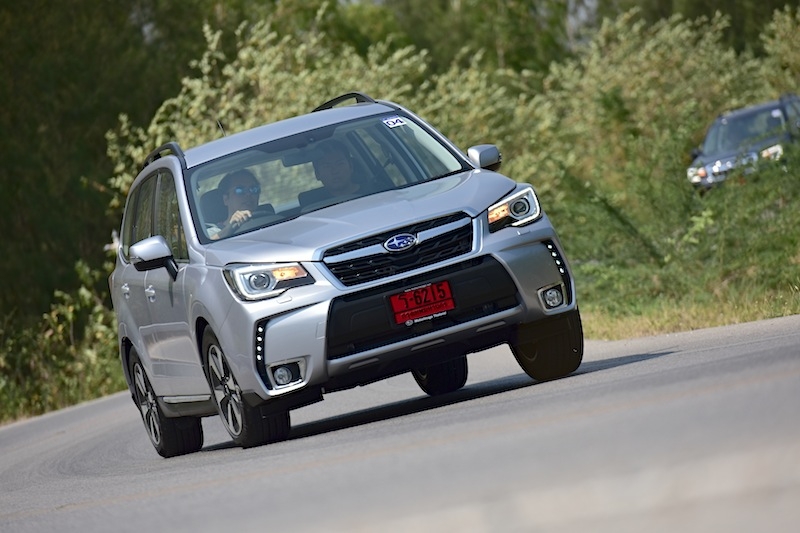 Lets begin with the exterior. To be honest, you need to have sharp eyes to notice the update: First and foremost, it gets an all-new LED headlamp cluster that includes the ‘C’ LED daytime-running light like the Levorg; they also feature auto-leveling, which should come in useful if you travel up and down unlit Malaysian back roads regularly. And to tell it apart from its predecessor, vertically stacked (more) LED DRLs are included onto the front bumper. Even the grill is different, with Subaru foregoing the honeycomb type. 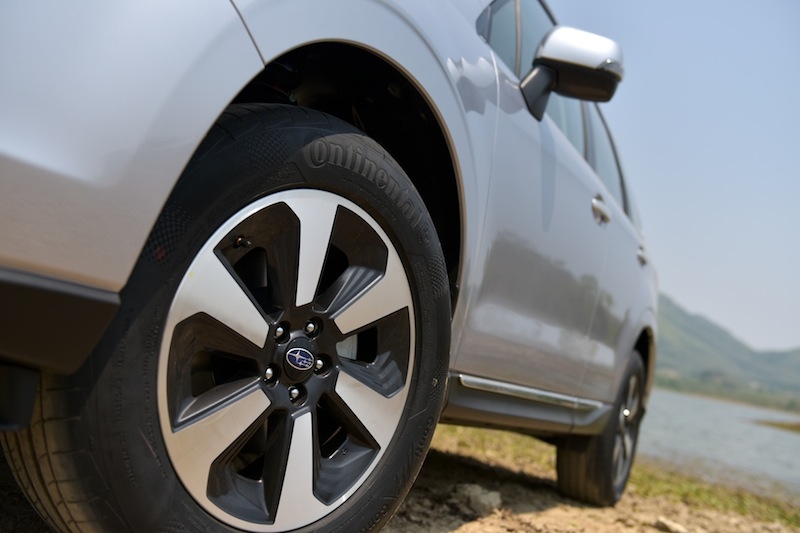 Previously a five-spoke design, the 2016 Forester gets a six-spoke, 17-inch type now. However while the test-car came fitted with road-biased Continental rubbers, Singapore bound ones will come with semi-off road Yokohamas instead. 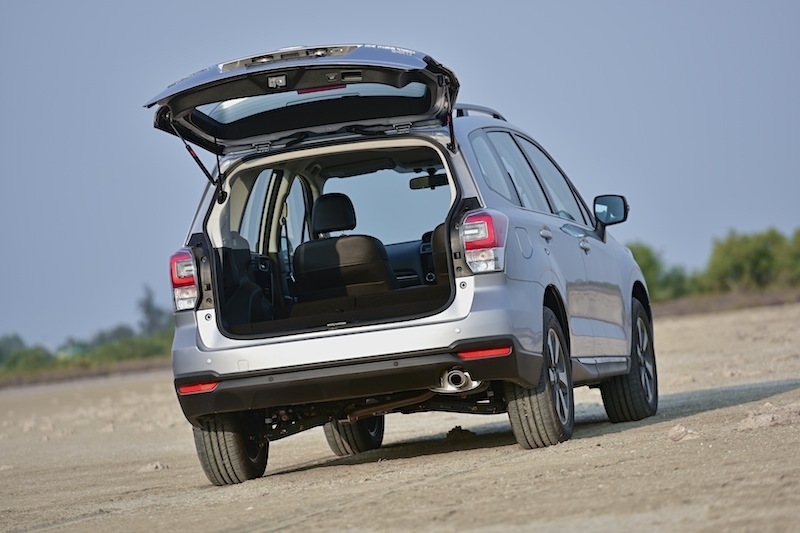 For the rear, changes were limited only to the tail lamps; it features the ‘C’ accent, in line with the headlamp’s fashion. 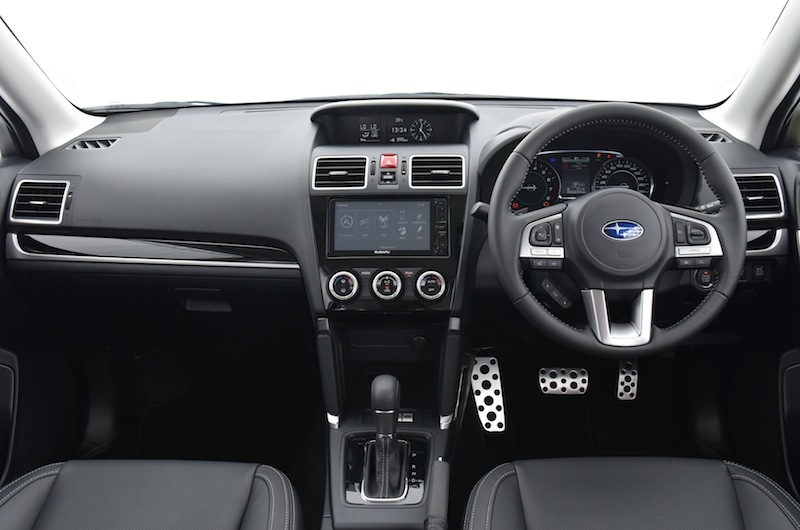 Cabin wise, the Forester features improved build quality. Aside from Subaru’s typical focus on robustness, added luxury comes in the form of better leather used to wrap the seats, door panels and dashboard; even the steering wheel feels nicer to the touch this time around. Another premium touch is the addition of a new multimedia head-unit, which features a touchscreen; GPS is also included. Safety wise, ISO-FIX anchors come standard, along with driver and front passenger, knee, side and curtain airbags. 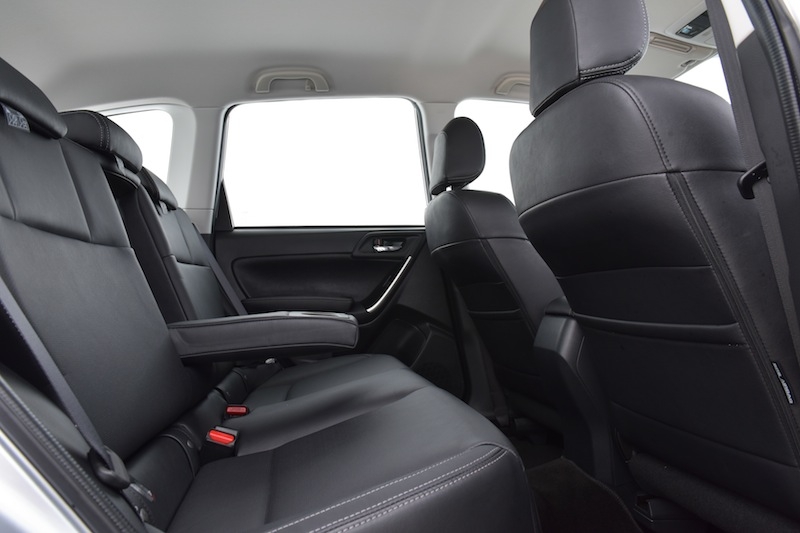 At the rear, three average-size adults can be seated abreast rather comfortably with sufficient head, leg and shoulder rooms. The same bench can also be folded away for more boot space: from an already useful 505-litres, it expands three times to 1,592-litres. Unfortunately when you do that, the bulky tray has to be kept elsewhere — a smart storage space, like the one found in BMW’s 216d Gran Tourer we’ve just reviewed, for this purpose would surely come in handy. 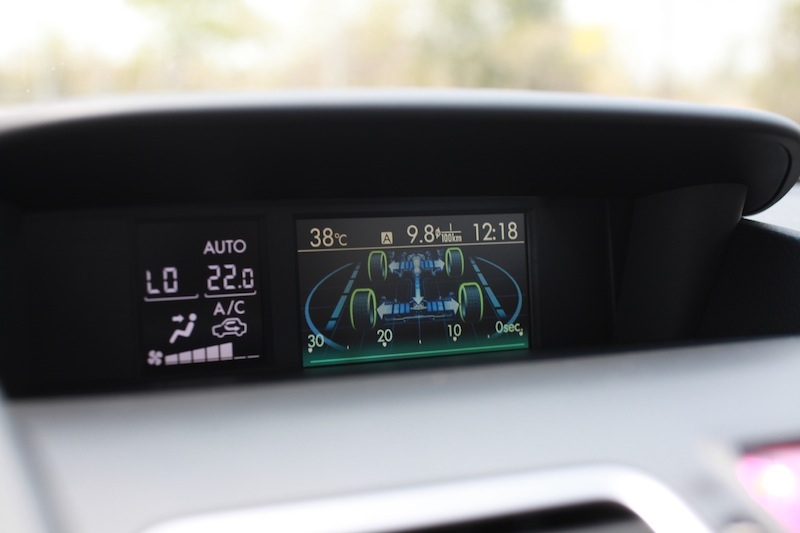 Now for some quick info: Singapore gets two versions, namely the natural-aspirated Boxer 2.0-litre ‘i-P’ and the turbocharged Boxer 2.0-litre ‘XT’; both are assembled in Japan. Unlike other Asian markets that get the Malaysian-assembled version, Singapore also does not get the entry-level Forester; and this is because Subaru recognizes how local consumers only want factory-fitted features and accessories, not favouring ‘bone-stock’ variants. 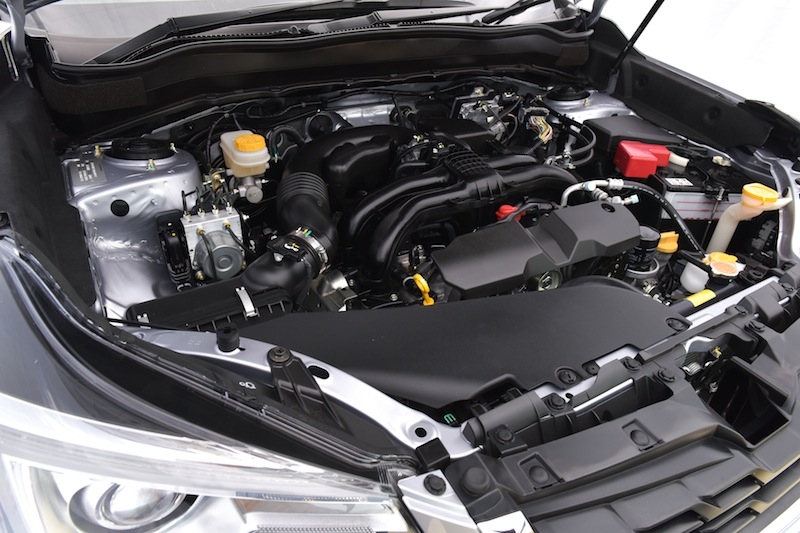 The FB20 Boxer powerplant is mated to Subaru’s Lineartronic CVT ‘box which also features seven virtual ratios — after all, paddle-shifters come standard with the car so you could have some fun when the family is not around. That combination produces a decent 148 bhp and 198 Nm maximum torque at 4,200 rpm. Just for the curious, 0-100 km/h is dispatched in 11.8 seconds while maximum speed limited to 192 km/h. 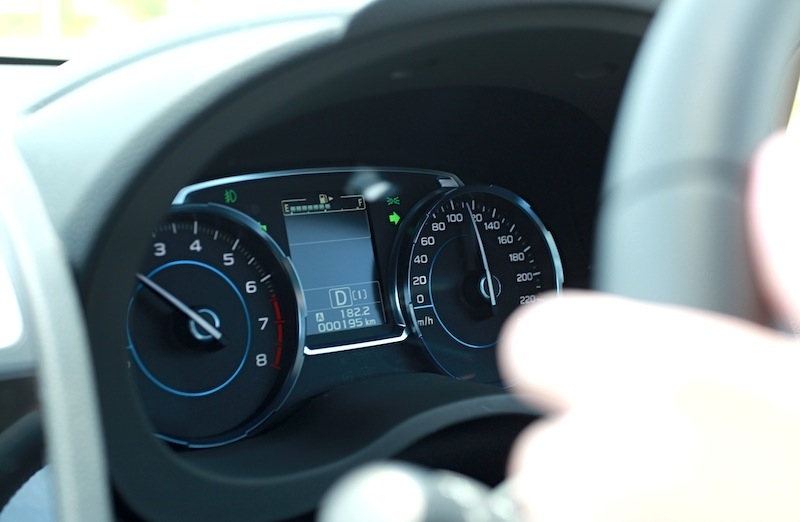 Without a doubt, this non-turbo Forester is no fire-breather preferring to take things at a more leisurely pace. However during the drive from Bangkok to Hua Hin, it somehow showed how sprightly it moves off on traffic-laden roads, allowing you to cover gaps and change lanes promptly. Even on the expressway, it reaches three-figure speeds without the need to put pedal to the metal. Better still, Subaru has improved this generation Forester’s NVH (noise, vibration, harshness) level to the point that the cabin is a pleasant place to be in even at 130 km/h; wind and tyre noise isn’t as audible as some of its other peers within the same price range. Engine noise only gets intrusive when you push it close to 5,000 rpm and beyond. 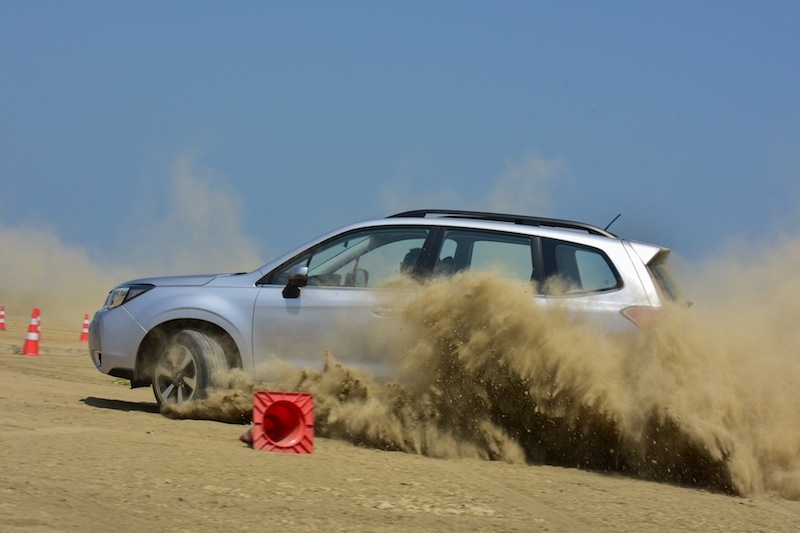 All that said, the Forester’s weakness is exposed while overtaking. With a kerbweight of 1,495 kg and sub-150 bhp output, you do need to plan such manoeuvres; for a WRX owner like yours truly who is used to instant power delivery, this came across as an uninspiring culture shock. Then again, the average Singapore driver won’t really need so much power on our heavily policed roads… 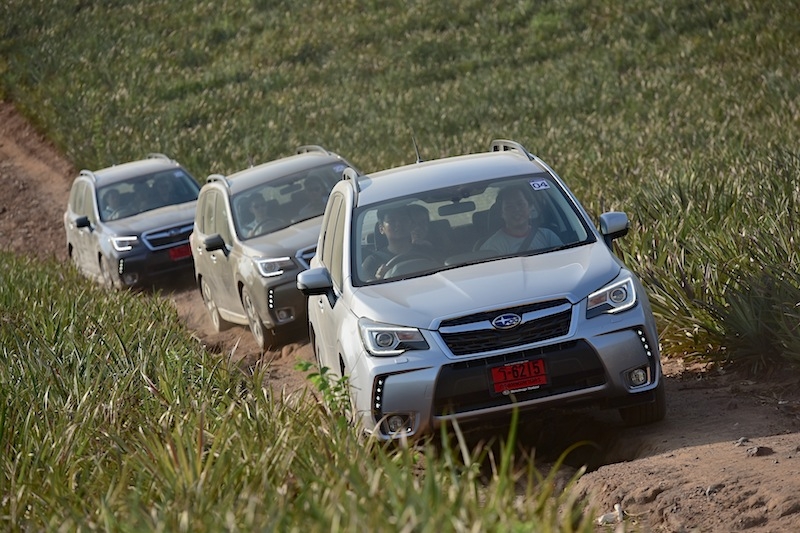 With full-time all-wheel drive, handling remains one of the Forester’s strong suit to the point sporty mannerisms posed no issue. Subaru did mentioned how the suspension system has been given better bushings and tightening along with improved steering system; it surely paid off as body movements are done with composure and steering responses are highly positive. In fact, ‘trashing’ the car on a sandy off-road track is done with much joy, the traction control also highly alert to cut power from the wheels instantaneously — yes, even with it switched off, it kicks in at the first sign of trouble. 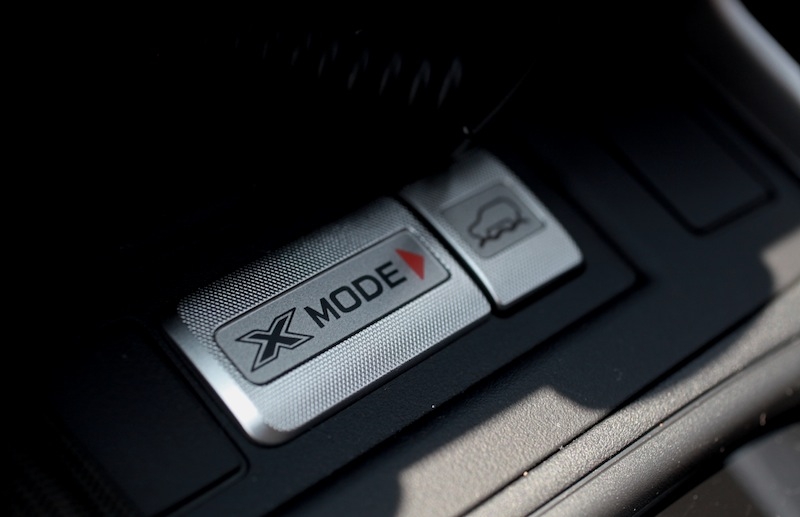 Subaru’s smart ‘X Mode’ function, on the other hand, is present to give those who love climbing up and down hills with their cars. Like the system usually reserved only for more premium brands, at a press of this button, the Forester would do the job for you; all you need to do is just, well, steer. 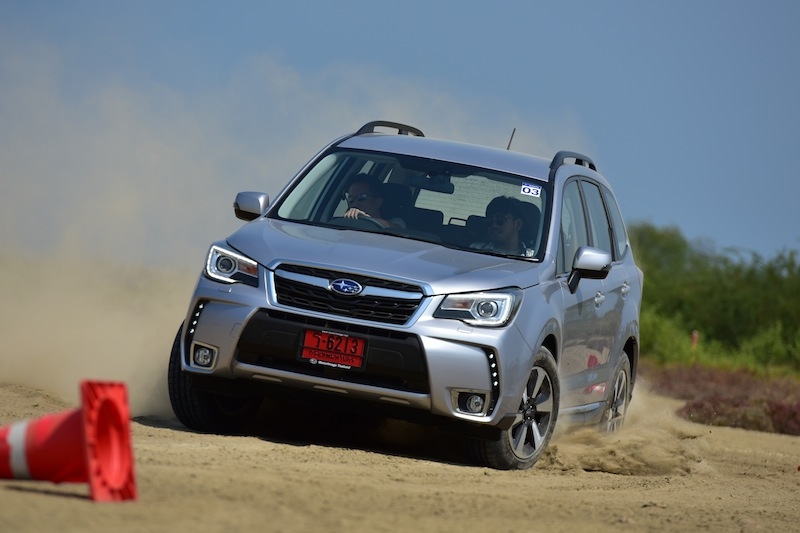 In conclusion, the Subaru Forester 2.0 i-P has maintained its reputation as being both a robust and reliable family transport, but with slightly more style and even better goodies this time around. Power may not be its strongest suit, but it sure made up for it in many other positive ways. 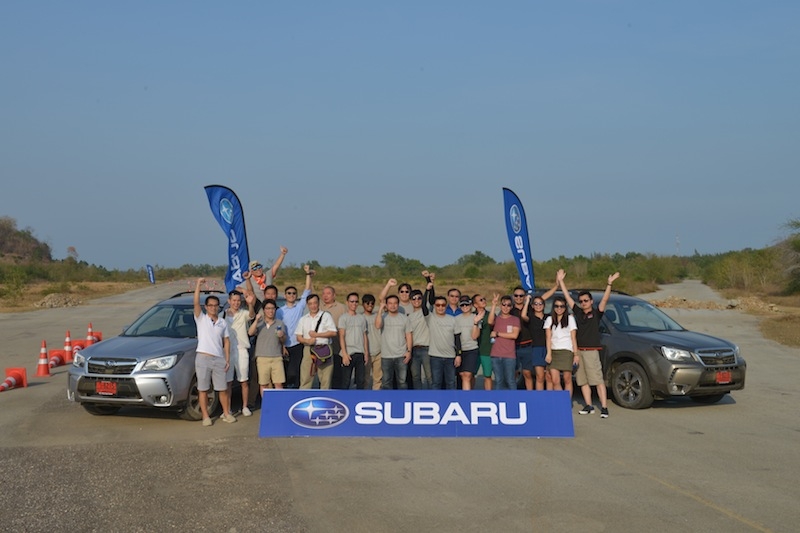