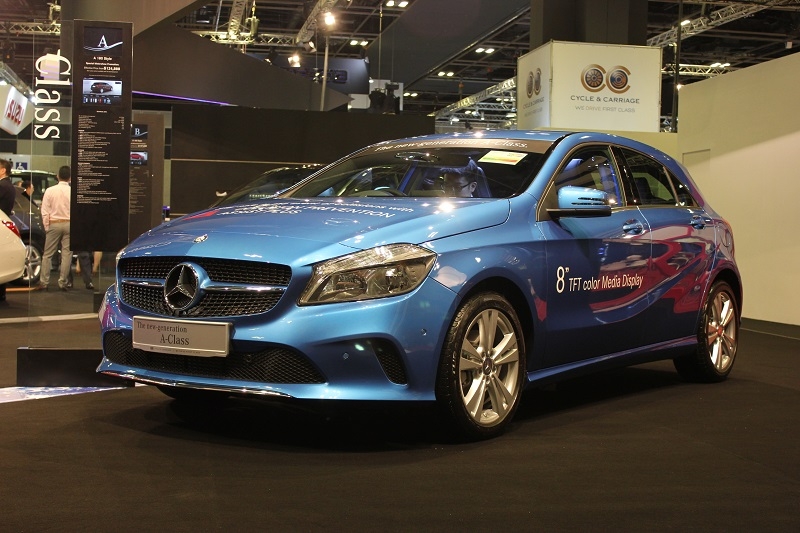 The country’s largest new car event of the year is back and bigger before! Burnpavement takes you through the 20+ new models making their debut in Singapore this year.

As promised, here is Part 2 of our 2016 Singapore Motorshow roundup:

Mercedes brought along the facelifted version of its smallest model, the A-class. With its 122bhp engine, the A180 will be the sole variant available, with the more powerful A200, A250 and A220 diesel models being dropped. Changes are minor, with redesigned bumpers and tail lights, new colours and trim pieces being the highlights. Additionally, the multimedia screen has been enlarged, and the car now comes with Collision Prevention Assist Plus and Active Parking Assist as standard.

At the other end (literally) of the Mercedes booth was this, the updated A45 AMG. Painted an acidic shade of Elbaite Green, the A45 certainly caught the eyes of many showgoers. It will have the performance to match the searing paint too - for 2016 the A45’s 2.0L turbo engine has been hopped up from 355 to 381bhp, dropping the 0-100km/h time to 4.2s (0.4 faster than before); this makes it the most powerful production hatchback ever made. 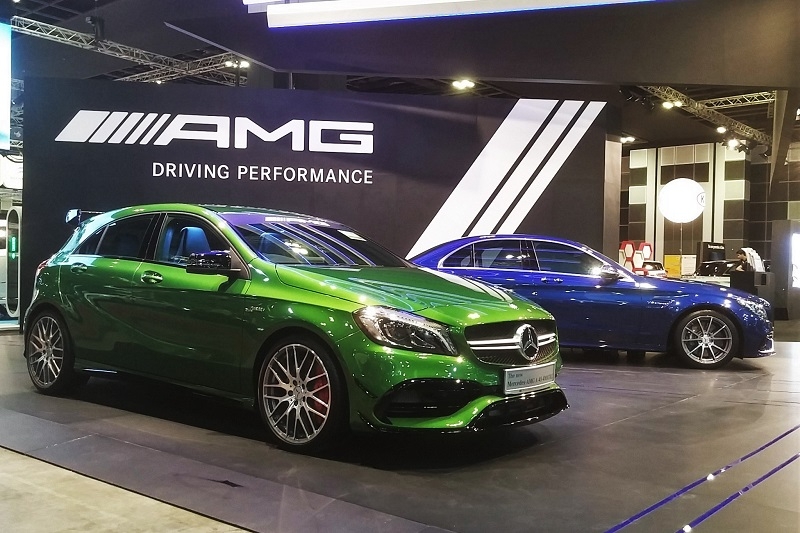 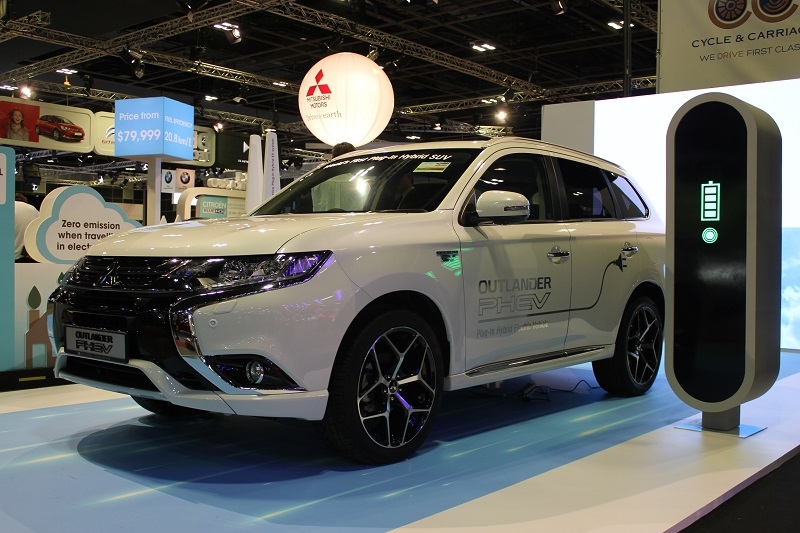 If you’re a staunch environmentalist yet have a family that requires a large car to get around, choosing an ideal vehicle must have been a conundrum. A small car might be green, but probably not very spacious, while large ones tend to not be so fuel economical. If you’ve been faced with this dilemma then worry no more, as Mitsubishi might just have the perfect solution for you!

Say hello to the Outlander PHEV (Plug-in Hybrid Electric Vehicle), the world’s first plug-in hybrid SUV. Unlike regular hybrids, a plug-in can have its batteries charged via a domestic power supply, ensuring a full charge at the start of each journey. So with a 2.0L petrol engine supplemented by two electric motors, the Outlander PHEV is capable of travelling up to 50km on electric power alone, easily enough for most daily commutes in Singapore. And because it was charged using the mains instead of the fuel-burning engine, that daily commute would cost you next to nothing in fuel bills!

Also new on the Mitsubishi stand was a facelifted version of the long-lived Lancer. Having first entered the market more than eight years ago, the Lancer EX is certainly getting a bit long in the tooth, so hopefully this facelift (new LED daytime running lights, redesigned bumpers and centre console, and updated equipment list) can help keep things fresh until a successor comes along. 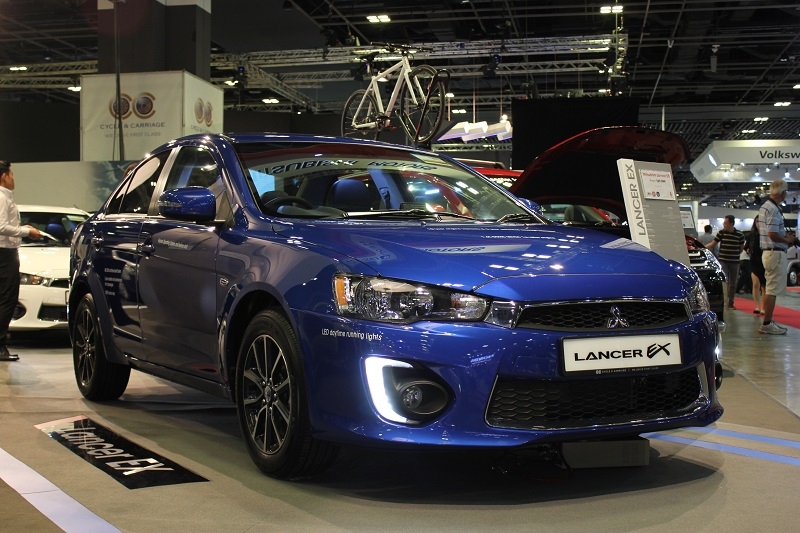 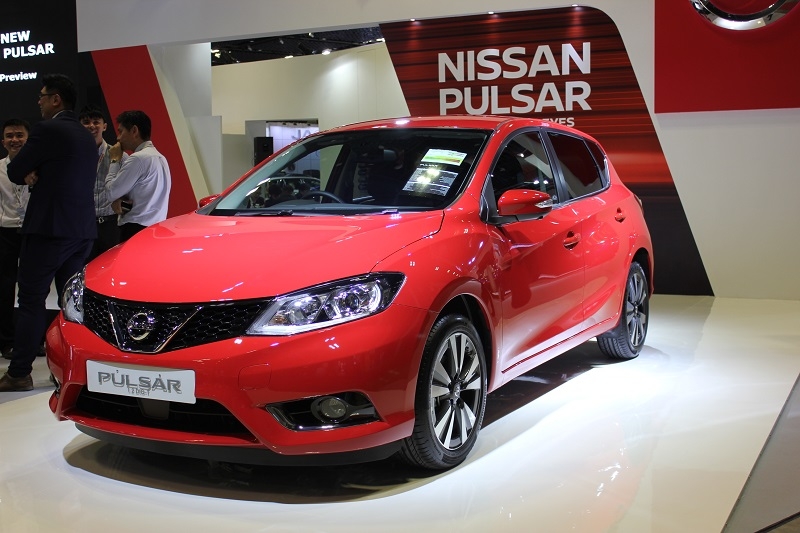 More than 20 years ago, the Nissan Pulsar was a popular offering from Nissan, offering buyers a similarly-sized hatchback alternative to the ever-popular Sunny sedan. In 2016, that nameplate makes a comeback, bringing Nissan back into the family hatchback segment against the likes of the VW Golf and Ford Focus.

With its V-shaped grille and boomerang headlight profile, the Pulsar’s styling cues help tie it in visually with Nissan’s range of crossovers. Its long 2,700mm wheelbase and claimed class-leading 692mm of rear legroom should appeal to families, while the claimed fuel consumption figure of 5.1km/L from the 115hp, 190Nm 1.2L DIG-T engine means it’ll be friendly on the wallet too. 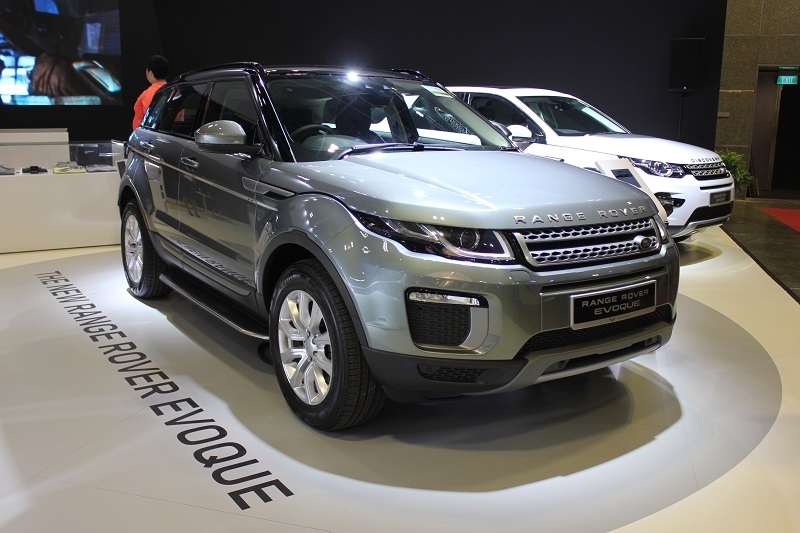 Range Rover Evoque The Evoque has been an enormous success for Jaguar Land Rover (JLR). Shifting over 400,000 units since its introduction in 2011, the Evoque has the distinction of being the fastest-selling Land Rover of all time. With such a stellar track record, the recipe for this facelift model sees minimal changes.

Visually, the Evoque gets a refreshed front bumper, new grille and rim designs, and is the first JLR product to be offered with full-LED adaptive headlamps. Inside, there are new seats, new colour and trim options, and a new 8-inch InControl Touch touchscreen infotainment system. Powering the Evoque is the same 240hp Si4 turbocharged 2.0L engine, coupled to a 9-speed transmission with All-Terrain Progress Control. 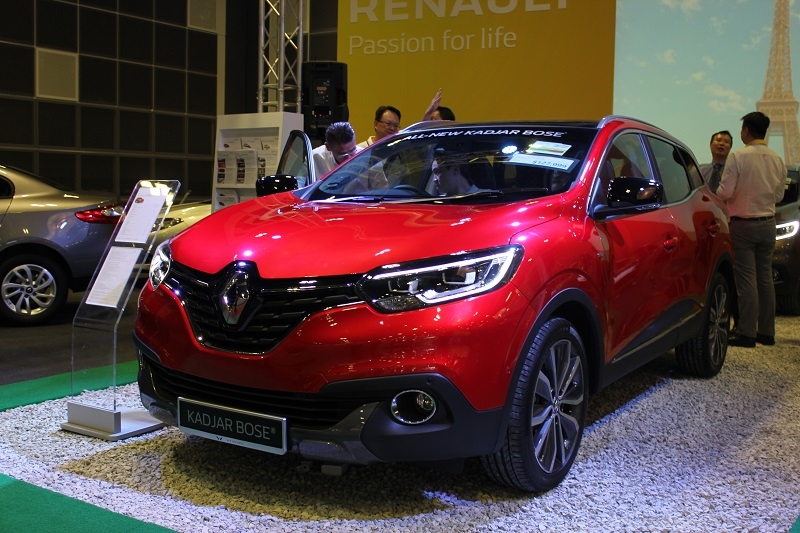 Another one of the all-new models was this, the Renault Kadjar, another addition to the family crossover class. Kudos must go to the designers, because this car looks a lot more imposing and bigger than it actually is — in reality it shares a platform with another popular crossover, the Nissan Qashqai.

Locally, the Kadjar will come in two flavours; the regular car and the Kadjar Bose edition. In addition to standard-fit 19-inch rims, Lane Departure Warning, Advanced Emergency Braking and Renault’s latest R-Link 2 multimedia system, the Bose Edition also features a Bose Premium sound system, a full-length glass roof, full LED headlights, and auto-park assist. Either way, the Kadjar should be cheap to run, thanks to a 1.5L turbodiesel engine that sips just 3.9L of fuel per 100km. 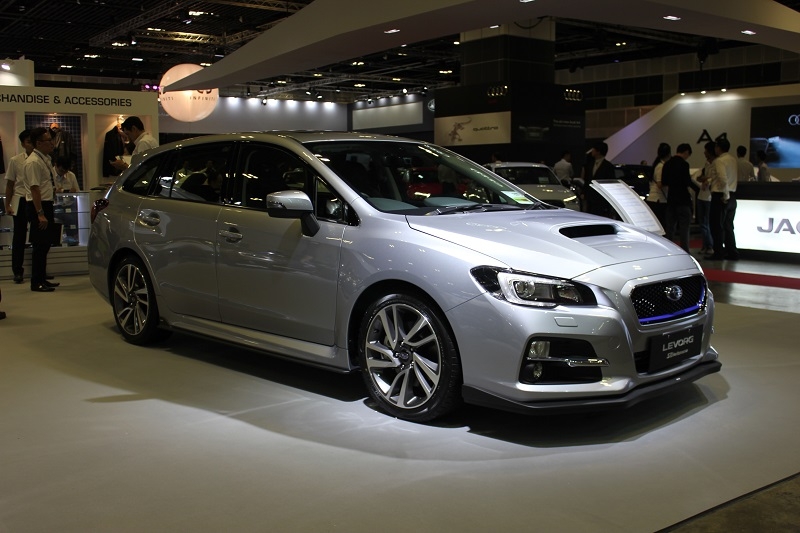 As a car company, Subaru is perhaps best known for its fire breathing rally-car-with-licence-plates WRX and STI models. Once known for accessible performance, the two have since moved upmarket both in power and price, leaving the company without a cheap performance car. This is where the new Levorg comes in. According to Subaru, its name is derived from the words LEgacy, reVOlution and touring, and combines the practicality of a wagon with the performance and feel of a sports car.

Key to this performance is one of Subaru’s long-time signatures: a turbocharged four-cylinder boxer engine. In this case, the 1.6L Direct Injection Turbo unit pumps out 170bhp and 250Nm, positioning the car as a sort of WRX-lite in performance terms. Not only is the Levorg faster than most other small family cars, it’s practical too, thanks to a 522-litre boot. 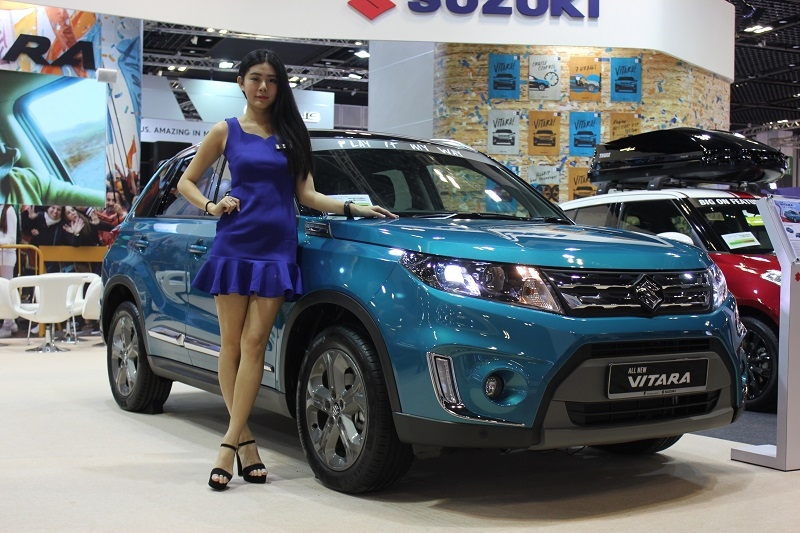 Suzuki Vitara For the past 28 years, the Suzuki Vitara enjoyed a cult following as being the only affordable SUV that was genuinely off-road-capable. From 2016 on however, dedicated mud-pluggers will have to look elsewhere as the Vitara has now shrunk into a family crossover. Gone are the selectable full-time 4WD, locking differential and low range transfer box, replaced now by a more road-biased ALLGRIP all-wheel-drive system and hill descent control.

With a 1.6L engine pushing out 118bhp, the Vitara slots into the market directly in line with the popular Honda Vezel/HR-V and oddball Nissan Juke. Reflecting its new urban-bound status, the Vitara is available in a range of eye-catching colours, such as the Atlantis Turquoise you see here. Inside the car, body-coloured dashboard inserts and a panoramic sunroof liven up the cabin, while leather and suede seats, cruise control and paddleshifts for the six-speed auto keep things comfortable and convenient. 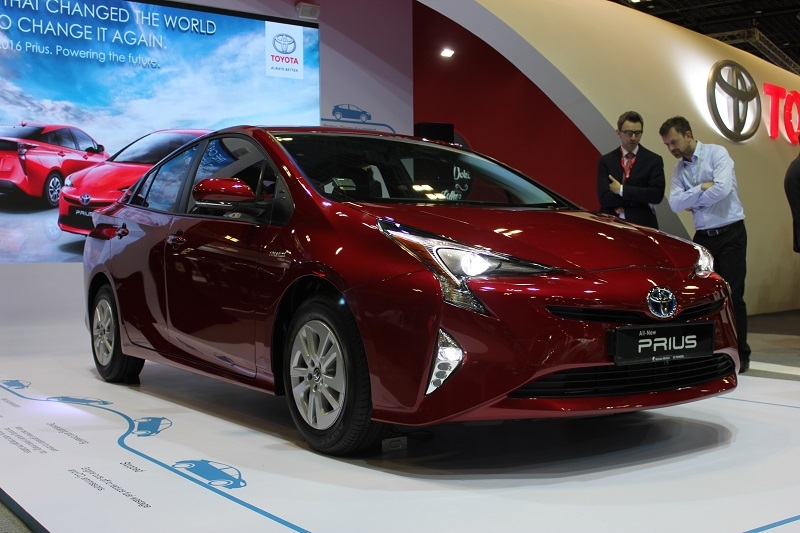 Toyota Prius Love it or hate it, the Toyota Prius will go down in history as one of the most significant cars of our time. It was the first hybrid car to be mass produced, and is now seen as the poster child for environmentalists the world over. At the Toyota booth, Borneo Motors previewed the all-new 4th-generation Prius that will be launched in Singapore later this year.

This latest Prius is a milestone car for more than just the green brigade, however, for it is the first car to use the Toyota New Global Architecture (TNGA) platform, which provides a lower centre of gravity and greater structural rigidity, and will allow for greater parts sharing among the company’s models around the world. Though the new car’s styling may polarize opinion, one thing that cannot be disputed is the effectiveness of the Hybrid Synergy Drive, which incorporates significant advances in battery and electric motor technology to make the new Prius even more efficient than before. 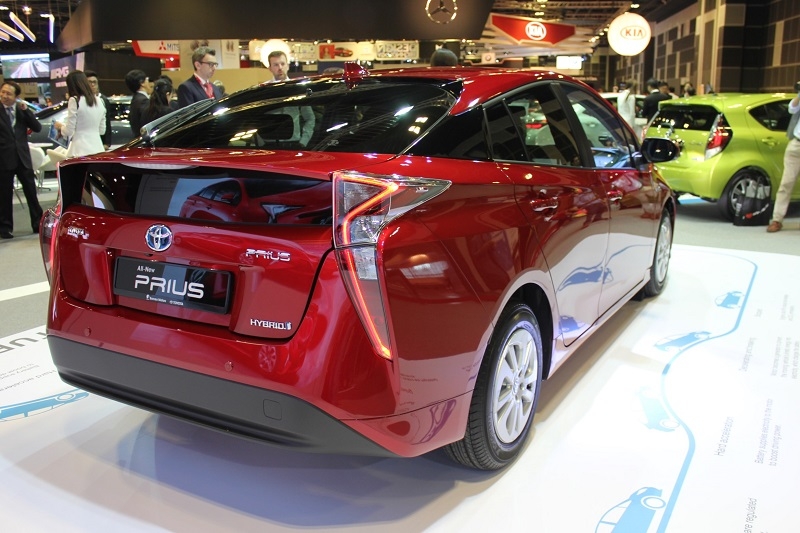 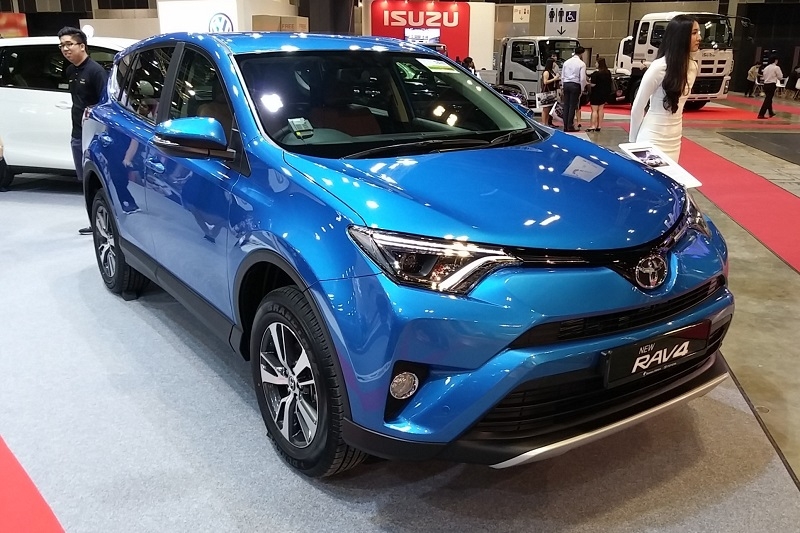 Toyota RAV4 The popularity of road-biased SUVs, or crossovers, continues unabated, and the segment has the Toyota RAV4 to thank for its success; it was the first vehicle to successfully combine the rugged looks and sense of adventure of a proper SUV, with the ease of use and low running costs of a regular car. The market is now more competitive than ever though, so the 4th-generation RAV4 has just had a facelift, a mere three years after its initial launch.

Front-end styling has been boldly updated, with LED headlights and a triple-decker grille, while the interior features updated trim, a larger 7-inch InTouch touchscreen interface, and a full-colour TFT information display in the instrument cluster. 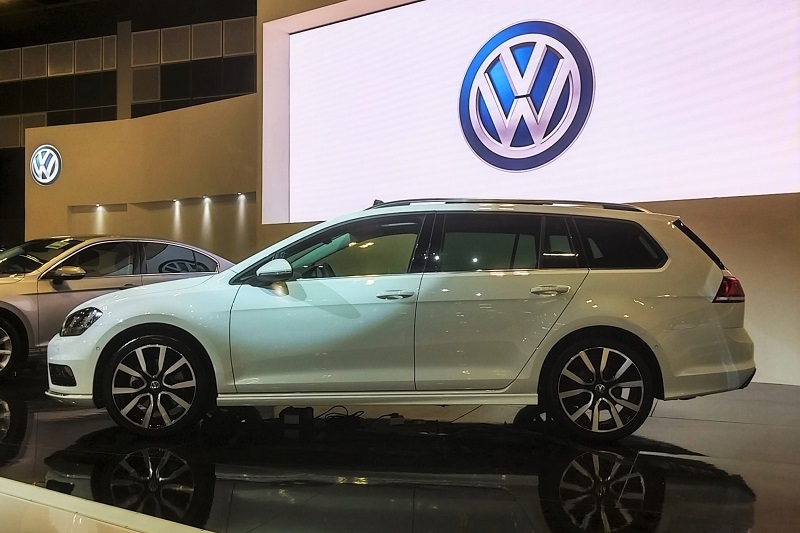 We’re particularly big fans of wagons here at Burnpavement, so the appearance of the Golf Variant at the motorshow was a pleasant sight for us. From the nose to the B-pillar it’s identical to the Golf hatchback, but aft of that, the Variant adds 307mm to the car’s overall length. This gives it a boot capacity of 605 litres with the seats up or up to 1620 litres with them folded. For added convenience, the loading sill is just 630mm off the ground, while the seats can be collapsed simply by tugging on levers located at the side of the boot.

Inside the car, customers will find the latest Discover Pro infotainment system, which is able to operate certain apps from your smartphone via the MirrorLink, Android Auto and Apple CarPlay services. Under the bonnet, the Variant is powered by the familiar 1.4L TSI engine with 122bhp. It also comes with the XDS electronic differential that was first developed for the GTI, to extra agility in the corners. Finally, the fitment of an R-Line bodykit adds aggression and gives it a look that’s very similar to the sporty Golf R.

In addition to the Golf Variant, 2016 will also see the launch of the Passat Variant, and all-new Touran and Sharan MPVs. 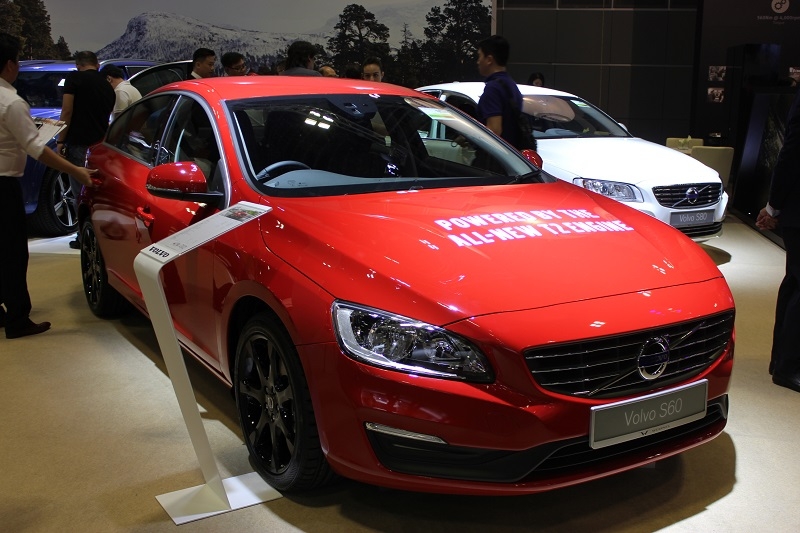 With all the fanfare surrounding the launch of the new XC90 in 2015, you could be forgiven for thinking that Volvo had forgotten about the rest of its range. Not so, as it has just brought in another variant of the S60, the T2. Powered by a small 1.5L turbocharged engine, the S60 T2 is notable for being the only premium sedan to be eligible for a Cat A COE. Yup, that’s right — this motor pushes out just 122bhp and 220Nm of torque, bringing up 100km/h in a lethargic 10.2 seconds. Still, a lack of performance is a reasonable tradeoff for a lower selling price isn’t it?