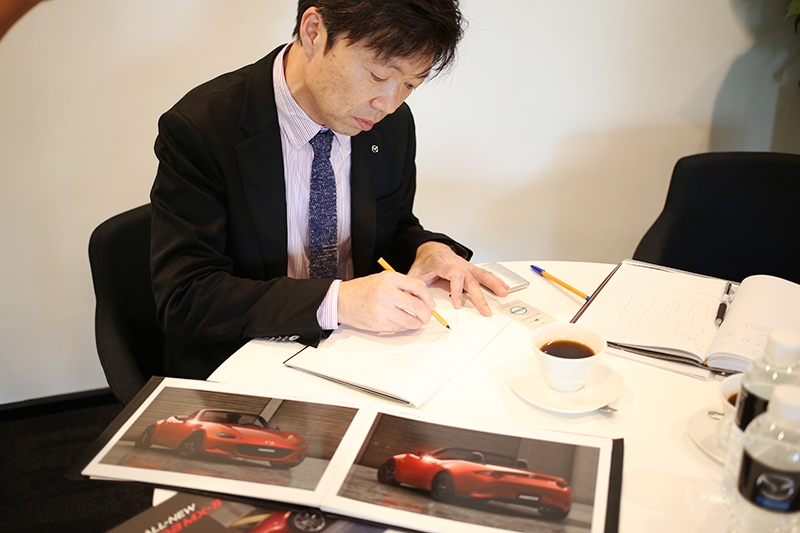 In the second of this two-part series, we sat down with the new MX-5’s Chief Designer to learn more about the car’s drastic change in appearance, and the role designers play in creating a new car.

Masashi Nakayama joined Mazda in 1989, the same year the original MX-5 was launched. Even though it was love at first sight when he laid eyes on the car, he told himself to take it steady and not rush into buying one. However, from the moment he opened the door to take one for a test drive, the clear weather, cloudless blue skies, and the car itself combined to give him a rush of sensations he had never felt before and captured his heart. He became an MX-5 owner that very day. In the years since, his MX-5 was a constant companion in the shared adventures and memories of him and his wife, and now, 25 years later, they love it more than ever. These experiences were his inspiration for the new MX-5, and he sought to create a car that would look better and better the longer you looked at it; something that would still provide joy and surprises to owners, even after two decades of ownership.

BP — The previous 3 generations of MX-5 had a design that was quite cute, rounded and smiley, which clearly evolved over the years. Why then did the ND's styling suddenly change to something quite aggressive and angry?

Nakayama — Of course, compared to the previous generations, the design is more aggressive, but I personally believe the most important thing is not how it compares to the older cars. When you look at the car without prior knowledge about the previous models, whether it is beautiful or aggressive or not, is not the most important thing. I believe that when we introduced the first-generation model, among all the players in the industry, car design had certain tendencies. So maybe every player had a much more pretty or softer face. But now, so many players have a much more aggressive face and complex design. So I think that compared to the other players today, the design is not that aggressive. 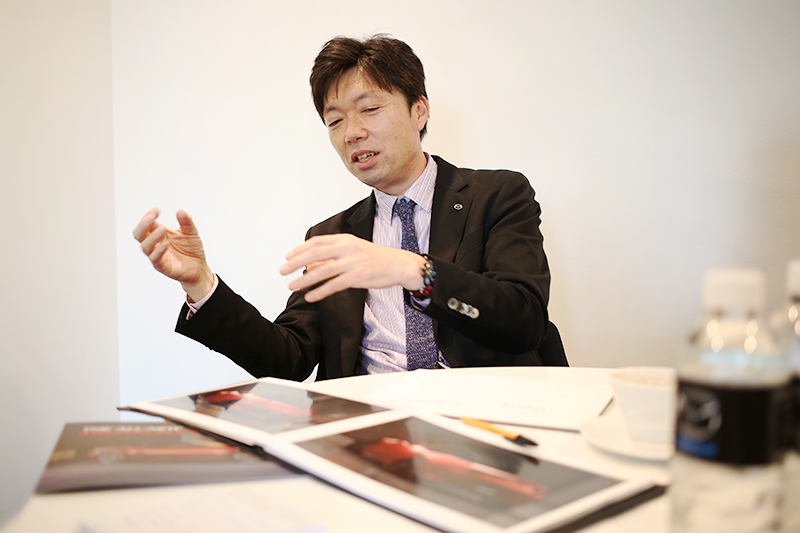 BP — How much of the design of the ND was based on the need to have a similar corporate styling across the whole range?

Nakayama — Yes, of course the new MX-5 has to be based on the KODO design theme, but I don’t think the elements of KODO design is a restriction in designing the MX-5. Instead it's more like a tool, a good tool, to make a more beautiful design.

When we first introduced the first-generation MX-5, people were shocked by its pureness and its beauty. But with the new generation, we asked ourselves, how to make that same 'wow factor' as the original car? So we went back to basics. I am an owner of a first-generation MX-5 for 25 years, and I'm a big fan of the car, so I wanted to create the same impact, give the audience the same love for the pureness of the design. But of course the tendencies of today are different, and the tools are different, and the technology is different. Now we have our SKYACTIV technology and our KODO design theme, so thanks to these new weapons, we believe we have achieved something similar to the original concept. 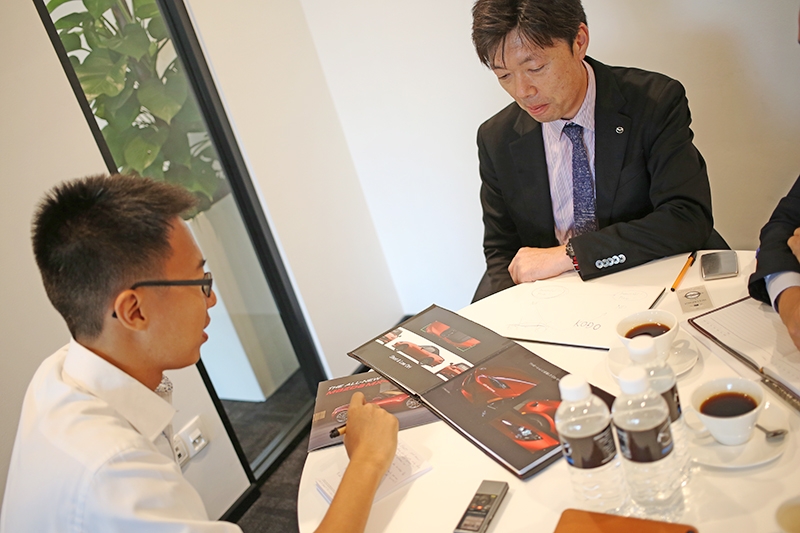 BP — What is your favourite design feature on the new MX-5?

Nakayama — I really love the rear Â¾ angle, especially how we were able to cut out a large volume of space from the corner of the bumper. 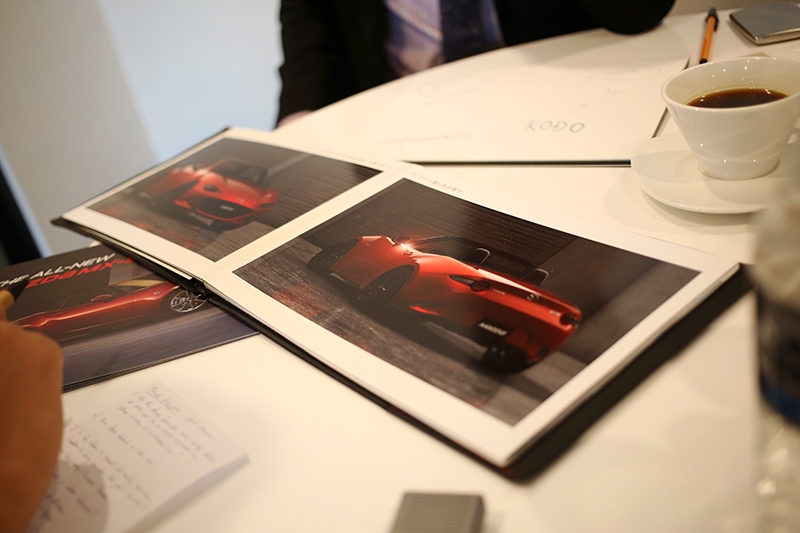 Nakayama — Good question. Let me put it to you this way. In a company there are usually marketing, finance, engineering and design departments. If they see different purposes or have different tasks, there will be conflict, and the priority they enjoy will be an issue for the company. But our approach was, first we had to have one common goal, which was to create a beautiful car that was profitable, accepted by the people, and financially viable. And then to achieve this common goal, how would each department work to make it happen? So I think the most dramatic improvement in our company was to share this common goal among all the departments. This was the most important element in creating our range of cars. 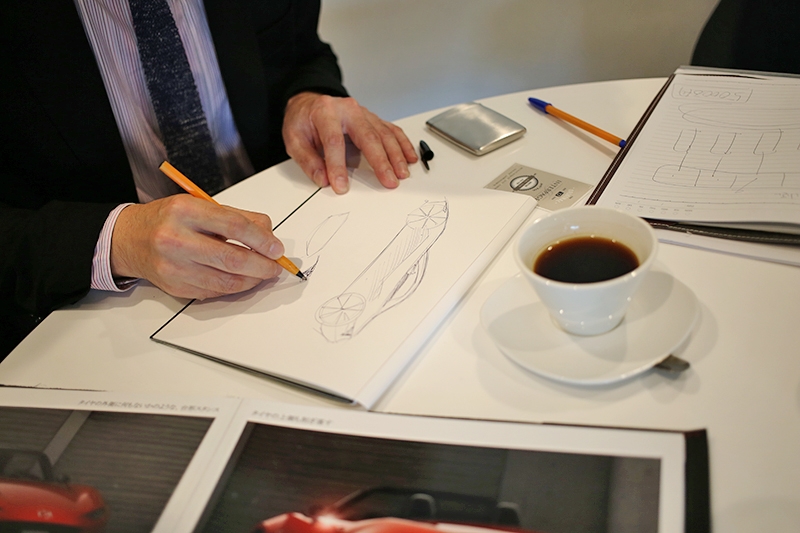 BP — Were there any design elements that you wanted to include, but were forced to alter or drop because it would create too much of an engineering challenge? For example, many production cars look very different from their concept versions because of the need to accommodate engine/suspension components or more cabin space etc. So in that way, was there anything you wanted to do that might not have been feasible to engineer?

Nakayama — Of course in our design environment we also consider cost and engineering factors. For example, if we could sell our MX-5 at a much higher price, then the things we could do would be very different. But of course we are a company, so we have to be responsible and consider the costs even in the design department. So I would tell you that we do not start from a design element; even in our department we are cautious about marketing, cost and engineering, so we will have a discussion with other people, and in the end come out with a common goal. Only then will we start to create the car. So it's really not about any internal competition. But of course, as you say, if we created a concept car, it's focused completely on design, so it will be different from the production models. But actually if you noticed Mazda's concept cars and production models, they are not that different (writer's note: see the RX-8 and Takeri concepts). Because we share the same goal; even the finance department believes we have to create a new, beautiful car. So that's why I think to share the same goal among different departments is very, very important. 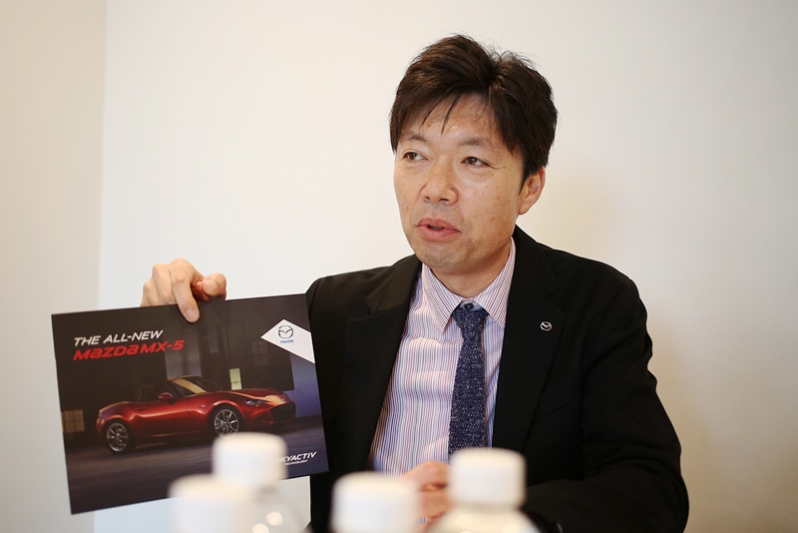 Nakayama — *smiles* All we can say is that we are thinking about all possibilities. Any questions related to future products, you will have to wait for the right time…

BP — So from a design standpoint, would you ever consider something like this? [We then showed Nakayama-san a rendering of a MX-5 Shooting Brake]

Nakayama - *chuckles* It's a nice design, but in my opinion, I think it dilutes the MX-5's beauty a little bit. 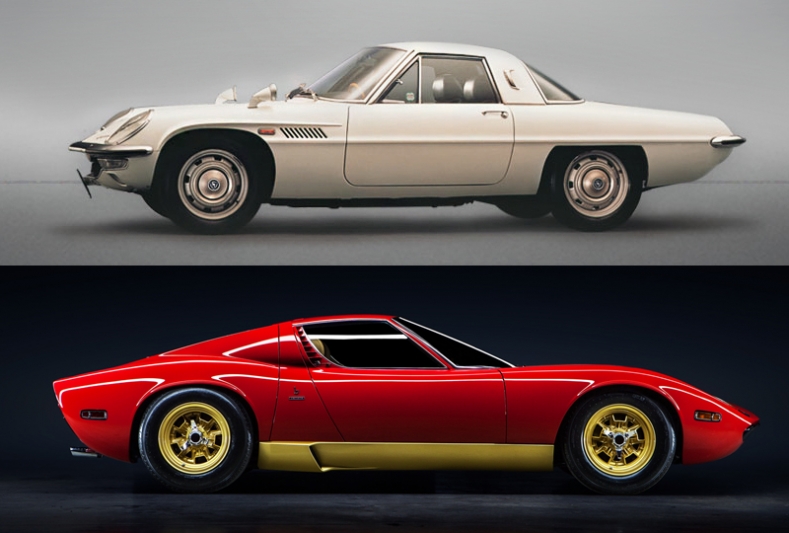 Nakayama — For Mazdas, the original Cosmo Sport. And for my favourite design ever, it is the Lamborghini Miura.

BP — Finally, now that your own NA MX-5 is very old, will you be getting an ND to use daily and keep the NA for special occasions?

Nakayama — In my garage at home I already have an ND parked next to my NA! *laughs*