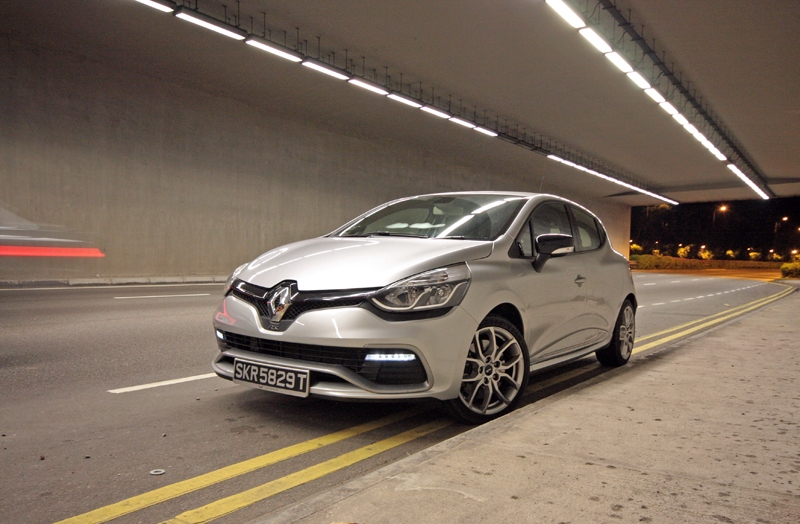 So the French is at it again giving us a playful little hatchback; but isn’t overly loud this time around

The entire concept of ‘hot-hatch’ has evolved rapidly over the years – what were once hatchbacks with a 1.0 to 1.6-litre engines that revs all the way to next week, has a steering wheel, seats four and a half, boot the size of a bucket, four wheels and comes only in manual transmission are now hatchbacks with 2.0 to 3.0-litre force-fed engines that grabs you by the neck, has a steering wheel with a myriad of controls on it, seats up to five, boot almost the size of a sedan, four big wheels and comes mostly with an autobox.

And for some — myself included — that simply, well, sucks; because along with the evolution, the cost of buying and maintaining one (servicing, petrol, road tax and insurance) has become expensive. A classic example is a fellow scribe who, having jumped from a humble Suzuki Ignis Sport - when his COE ended - to a Mark VI Golf GTI, ‘fainted and had to be revived with Axe oil rubbed into my nose’ (his exact words) the first time he pumped a full tank of petrol; the same thing happened when he did its second and third refuel. I’m equally sure most of you, who went through a similar jump, could associate with the similar scenario.
My point is this: hot-hatches have grown in more ways than one. 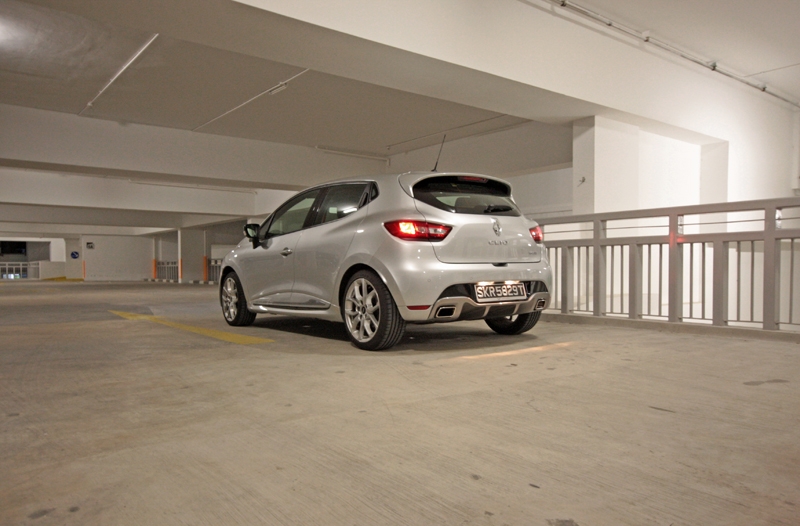 Because modern hot-hatches came direct from the factory with so much gadgetry to keep it safe, even the noob-est of noob driver can be an overnight superhero. And if you’re a highly experienced driver, you can easily spot such breed on our road (sometimes you want to punch them in their faces and tell them to quit driving). 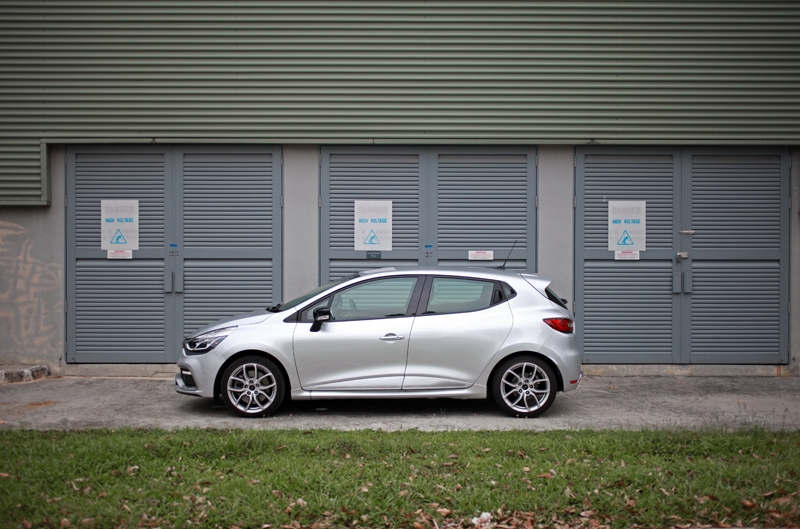 Anyway, Renault decided to do things very differently — now say hello to their Clio R.S. They’ve made this one with a not-so-big-engine, didn’t provide too many safety nannies (nothing much, just an electronic LSD, ABS with EBA, stability control and hill start assist) while everything else depends on the driver; with an autobox (times are changing they say).
Traditional handbrake lever meant you could still execute some good ol’ handbrake turns… 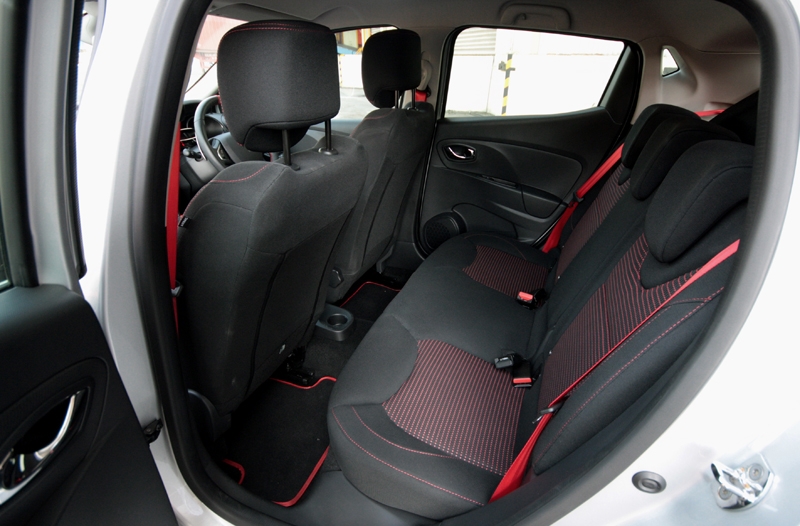 We’ve sampled the Clio R.S previously, yes, but that was the more hardcore and driver focused Cup variant. The one you’re looking at here is the ‘family-friendly’ version, the Sport. 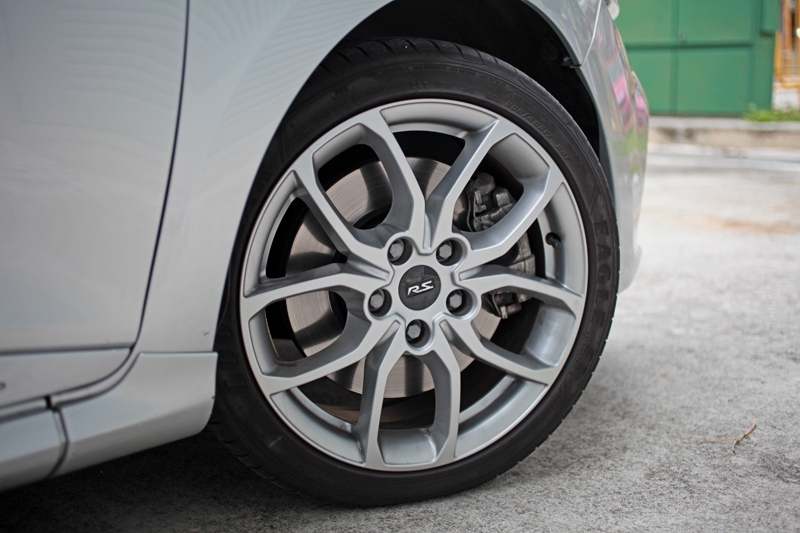 What are the key differences between the two? This Clio R.S Sport gets a softer suspension set-up and different rim and tyres combination (17-inch alloys wrapped in 205/45 R-17 Goodyear Eagle Asymmetric 2 tyres versus the Cup’s 18-inch wrapped in 205/40 R-18 Dunlop SP Sport Maxx TT). 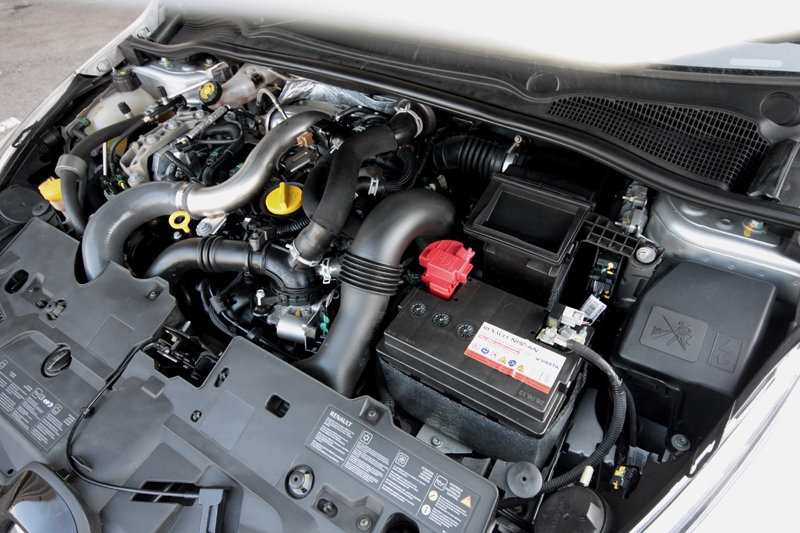 Everything else remains largely the same as per the Cup brethren — which means you get a 1.6-litre 4-cylinder, 16 valves turbocharged powerplant mated to Renault’s 6-speed dual-clutch EDC transmission that whips out 200 bhp and 240 Nm of torque (available from 1,750 rpm). The car needs only 6.7 seconds to reach 100 km/h from standstill; for the curious, that is only 0.2 seconds slower than the 220 bhp Golf GTI. 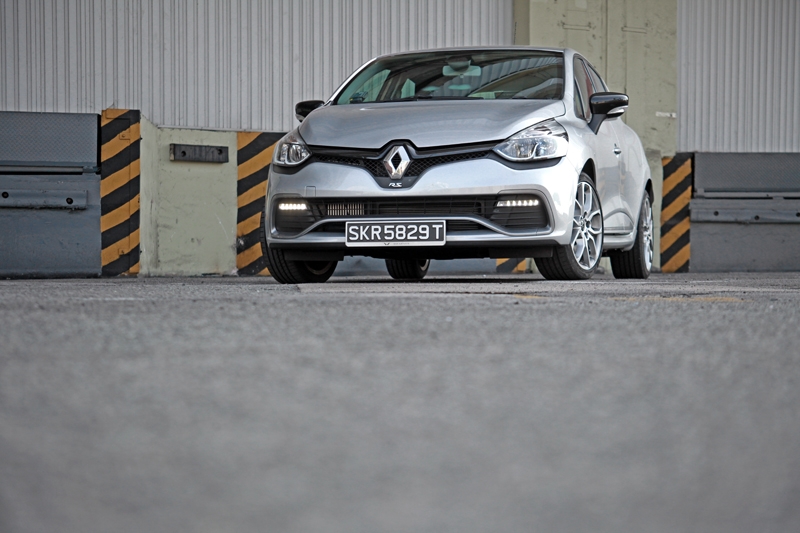 How on earth Renault manage to execute such a feat? Simple, really: They kept the Clio R.S’s weight in check. While the Golf GTI weighs in at 1,370 kg, the French only has 1,204 kg to lug around. 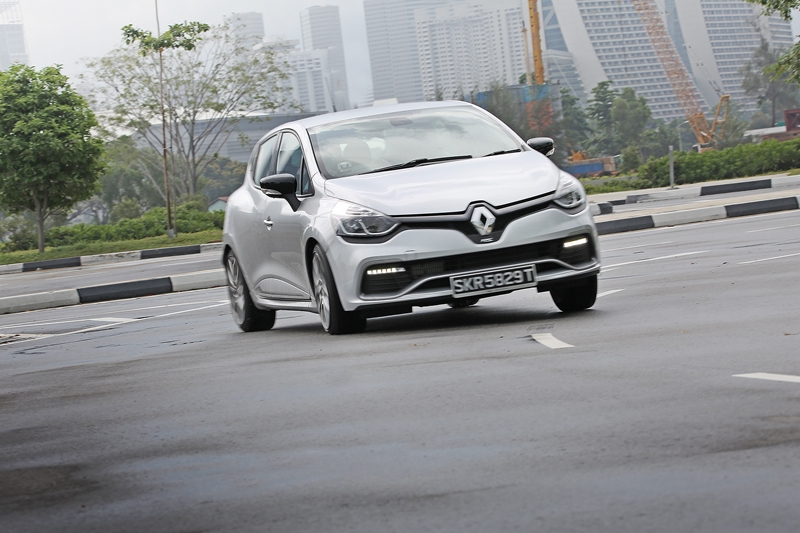 A hot-hatch is all about entertainment, pure and simple. Having said that, the Clio R.S is a cracking car that packs a whole lot of wallop, providing good day-to-day practicality and entertaining performance at the same time. Frankly speaking, it’s just one of the finest hot-hatch you can ever get in the market now as it didn’t deviate from the same basic recipe of “powerful engine shoe-horned into a relatively compact body”. EvenÂ in front-wheel drive format. 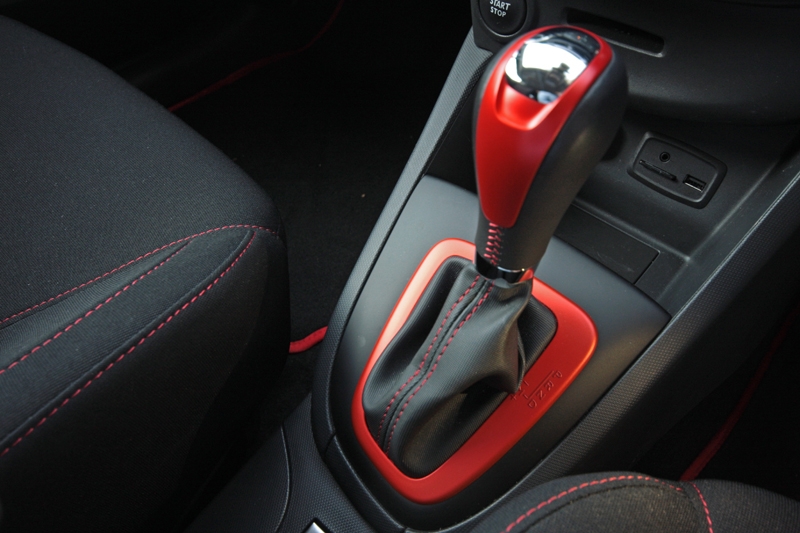 Its gear ratios have all been tweaked too, with second through sixth all calibrated to take full advantage of the engine’s peaky power delivery. You can let it run on its own, or be a little heroic by shifting your own gears via the paddle-shifters that were taken off the Nissan GT-R, mind you. 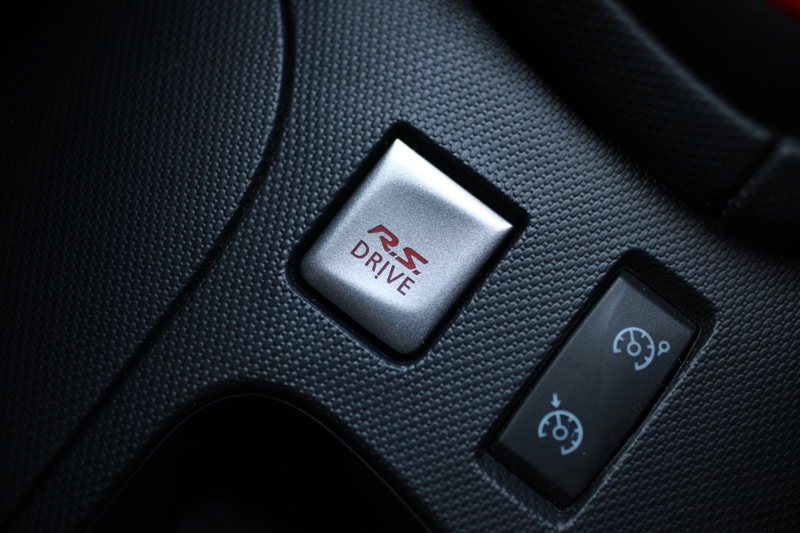 Just like the Cup, the Sport gets R.S. Drive as standard. Here, you can select to drive in Sport mode that gives you a throatier exhaust note (backfire included for more drama), sharper throttle response and, very simply, makes you feel like a hero. 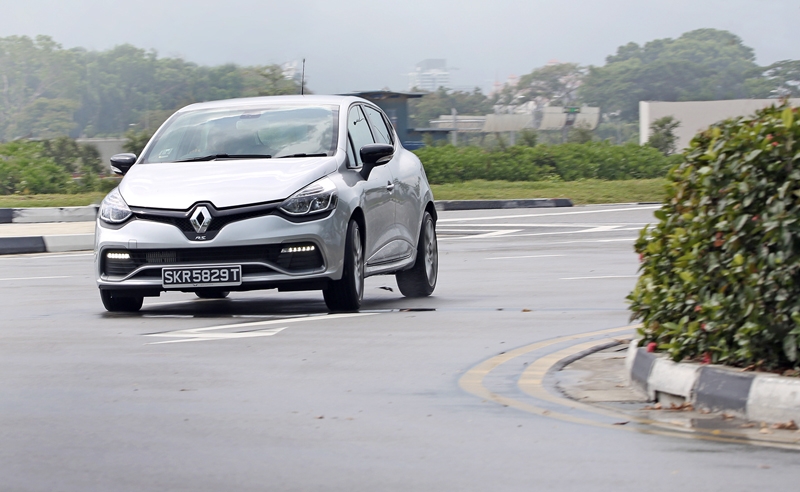 Chuck it into a corner at any speed, and the car will firmly stick to the asphalt with no hint at all that it’s going to snap away from you. There is some pronounced body-roll over the Cup, but it’s not the sort to throw you off; more like adding more sensation to your drive. It feels balanced and sharp — you can tune into what each wheel is doing. The steering is quick and precise — information on how much grip there is (usually loads and loads) goes directly to the part of the brain that is instinctive and reflexive... Suddenly, I’m tweaking the throttle and correcting the steering with ease and speed, or I’m dabbing the superb brakes like I’m completely used to the car. 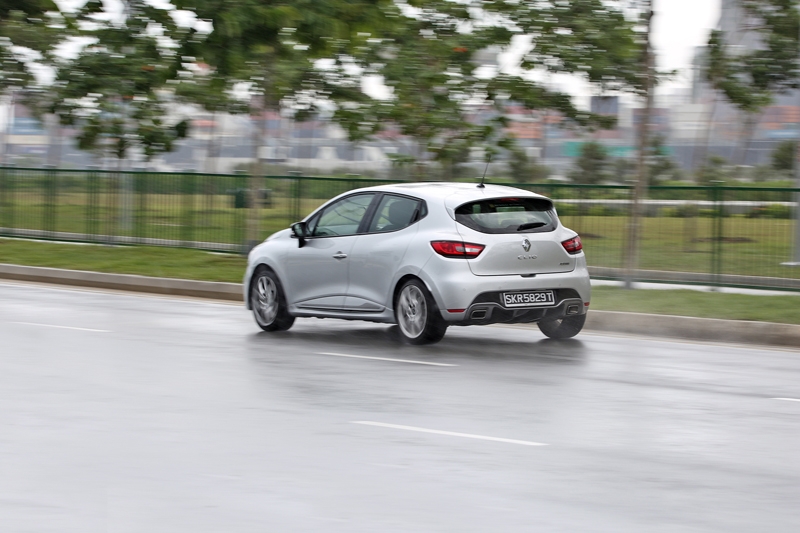 All these, however, doesn’t mean the ride is extremely hard, as it can still cruise on the expressway comfortably. It remains firm, yes, but never uncomfortable when you compare to the Cooper S’s. 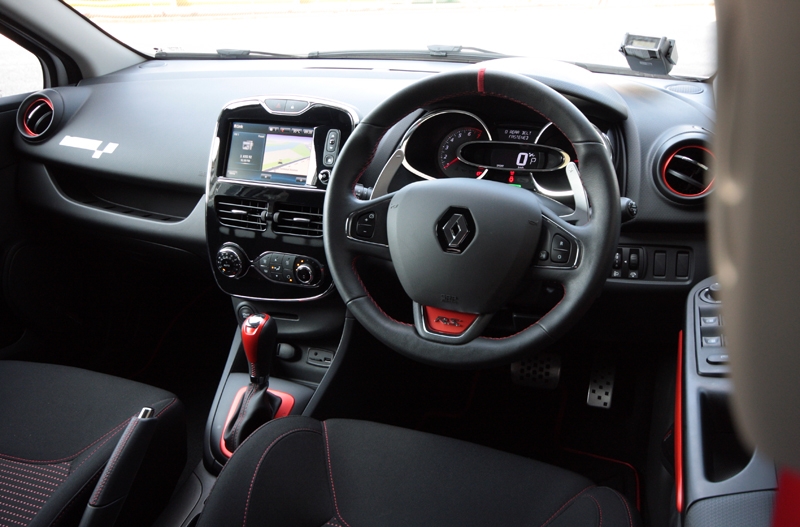 Some may opine the almost bare interior is a mega turn-off, but if you’re a follower of hot-hatches, you’ll surely find its interior is all hot-hatch stuff. Black theme (and mismatched orange add-ons) aside, there’s no missing modern goodies. Just name it; it’s there — digital air-con, factory-fitted audio system (with Renault Bass Reflex speaker system), digital display, racing pedals and not forgetting auxiliary points for your smartphones and iwhatnots.
The switchgear works with a click by now familiar with Renault, and the overall fit and finish is respectable. The steering wheel is perfectly sized, and the driving position is just exemplary — like I’ve mentioned earlier, it’s all hot-hatch stuff 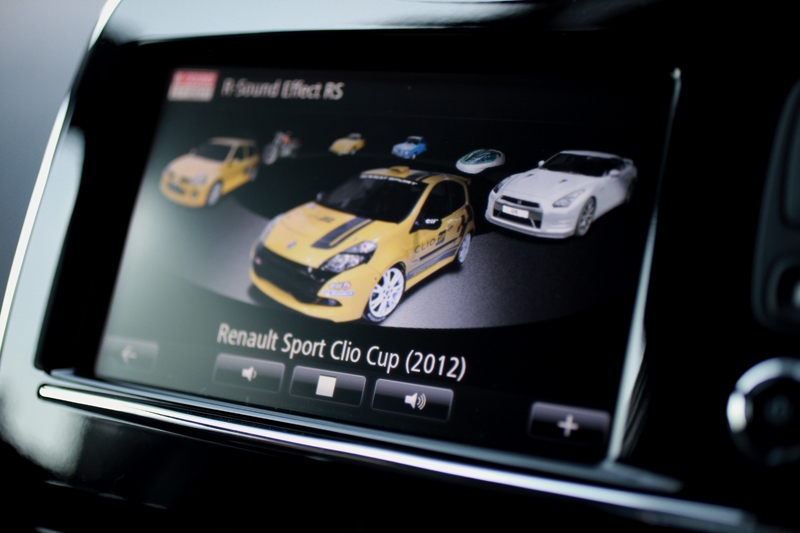 On paper, the Clio R.S Sport sounds perfect for those of you looking for a hatchback with both useable power and practicality in one car.Â Ok fine, so there are some little nitty-gritty issues with the plastic used for the interior,Â but when you really think about it, you’re paying for a car that is technically marvellous. It handles like something out of this world, a marriage made in heaven when you’re talking about the engine and gears (surprising for an automatic), and overall, offers a driving experience you’ll find rare to match in this day and age. 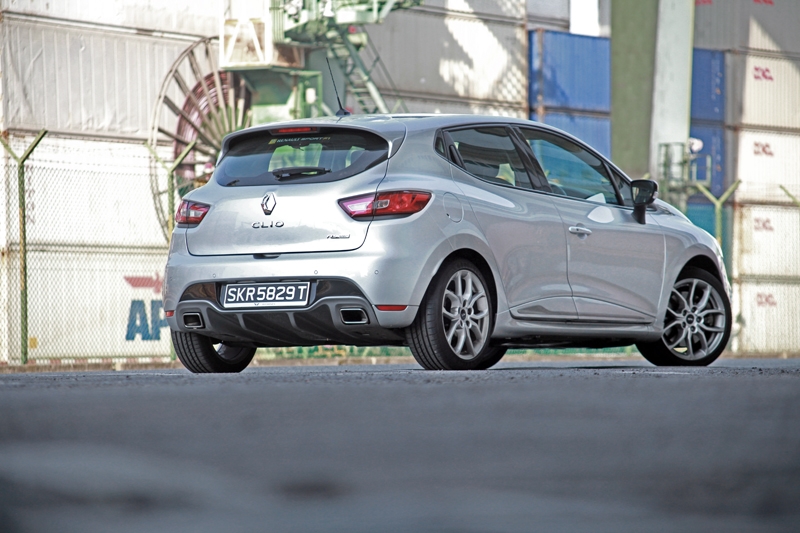 And at this price bracket, it’s either this or the rather predictable Golf Sport; or even a 5-door Cooper if you insist on more style than horsepower. But chaps, if you want an answer that’s straight from my heart, I’m sold on the Clio R.S Sport. I can live with its shortfalls.