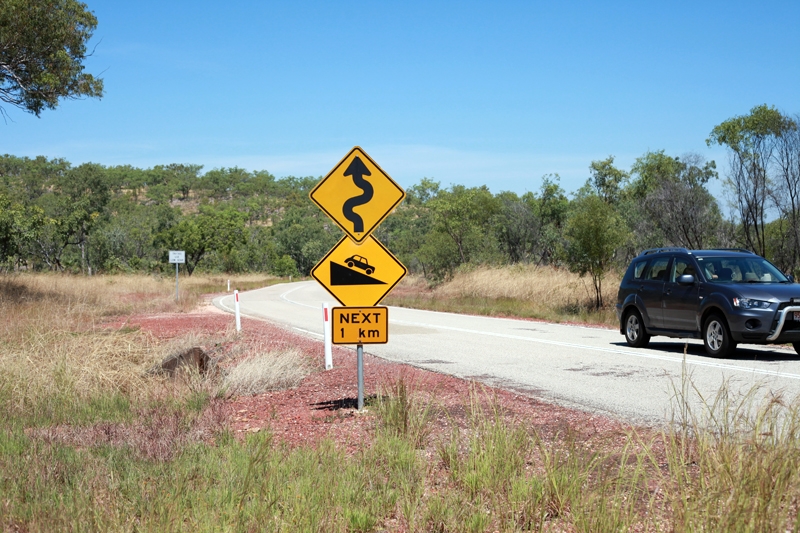 We headed to Darwin, Australia for a road trip… Wieee!

Mention Australia as a holiday destination and cities like Sydney, Melbourne, Perth and Gold Coast would immediately come to mind. However, flying to such Australian cities from Singapore would take a significant amount of travel time; a flight to Sydney takes more than eight hours, Melbourne just slightly more than eight hours, to Perth more than five hours and lastly to Gold Coast would mean spending eight and a quarter hours on the plane.

Well, it's because of those factors I decided to try travel to Darwin instead. And here are my reasons why: Firstly, it’s an almost forgotten destination; which means I don’t have to fight with other tourists. And also means I won’t bump into people I know; after all, the whole purpose of a holiday is to be away from it all.
Secondly despite being a regular traveller (like most of you readers), I do not enjoy staying in an airplane for too long - the flight from Changi Airport to Darwin International Airport takes only four hours, which sounds rather doable for me. Now to put things into perspective that is the similar travel time, by car, to get from Singapore to Kuala Lumpur. Which is also perfect if you have children who do not enjoy long-distance travel.
Thirdly, it is constantly summer (wet from November to April, warm and sunny from May to October) meaning I do not have to pack so much clothes — more t-shirts, bermudas and sports shorts instead. Hooray! 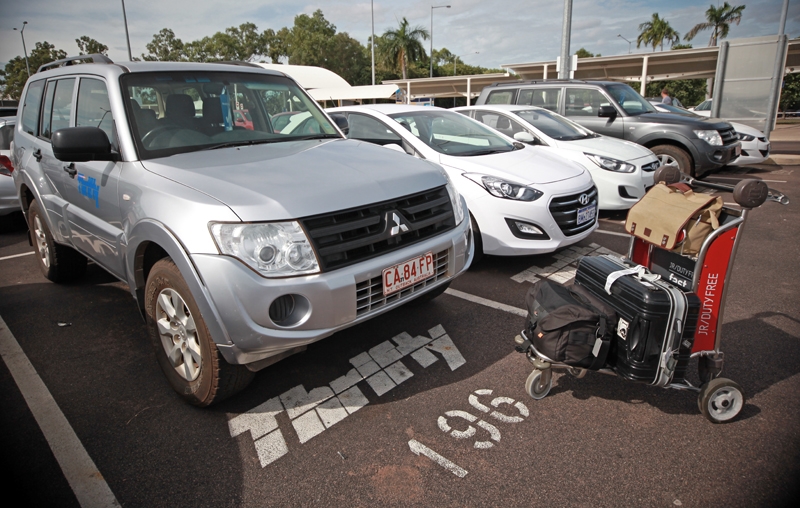 Most importantly though, Darwin is blessed with national parks - for an urbanite looking for a different sort of holiday far away from the hustle and bustle of city life who needs a retreat close to nature, this sounds utterly perfect.
After getting some help from Tourism Northern Territory in planning my much-needed holiday, I hopped on Silk Air flight MI 801 one early Tuesday morning and off I flew to Darwin. 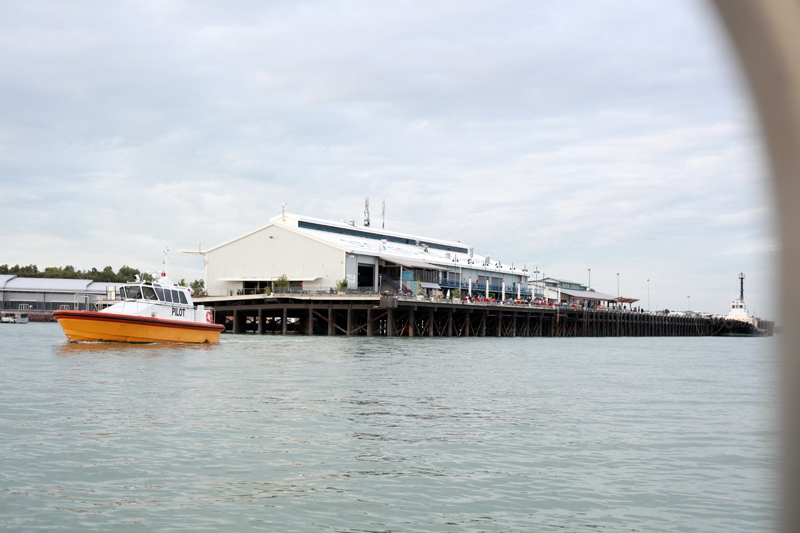 Darwin City
After picking up my rental car - a 197 bhp, 441 Nm 3.2-litre Mitsubishi Pajero GLX diesel - from the airport, I headed straight for Darwin Waterfront Precinct, located some 15 minutes drive away, where I spent the night at Vibe Hotel. Besides the wide range of eateries and clubs found here, it is also home to the historical Stokes Hill Wharf - Darwin’s only wharf from as early as 1885 until the Japanese bombed it in 1942, repaired between 1953 to 1956 and became Darwin’s general cargo wharf till 1972. Today however, it has transformed into a dining hub, where you can enjoy both casual and alfresco eateries offering local dishes and Asian cuisines. At the same time, it is also the boarding and alighting point for boat cruises, and also a renowned fishing spot among locals.
If you have children, then they would surely enjoy the Wave and Recreation Lagoons. This manmade beach offers all the water fun, including playgrounds to floating platforms and even artificial waves. 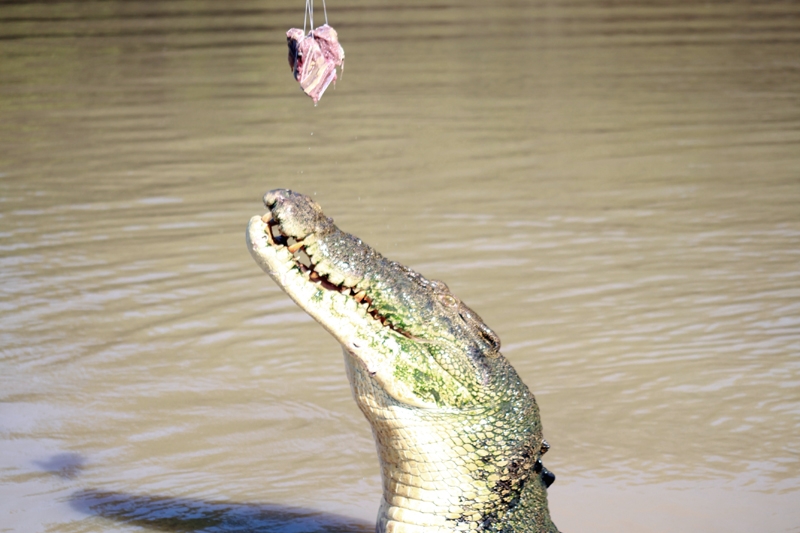 Kakadu National Park
Waking up early to catch the sunrise from my hotel room, I packed up, had my breakfast and checked out to make my way to my first out-of-city destination, Kakadu National Park.
However before that, I had to go check out one of Darwin’s unique attraction: feeding wild saltwater crocodiles. Located about 45 minutes drive away from the hotel, Spectacular Jumping Crocodile Cruise (located along Arnhem Highway) is a one-hour cruise that not only brings you up close and personal with the crocodiles but also showcases the ecosystem. The highlight here is definitely seeing crocodiles (affectionately known by locals as ‘salties’) launching themselves vertically to snap their bait off; mind you, some of the crocodiles here are more than 4-metres long! 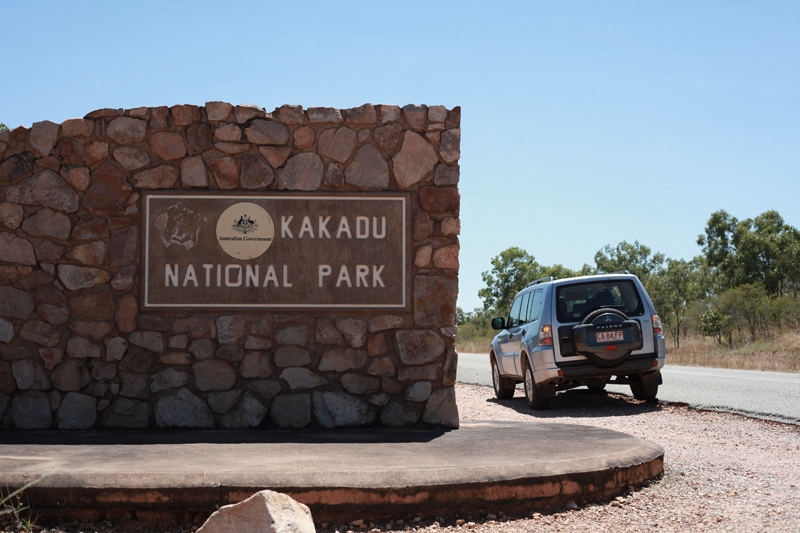 Once done with that, it was straight to Kakadu National Park’s Bowali Visitor Centre, located some 160 kilometers away. The journey here saw me drive along the Arnhem Highway before connecting to the Kakadu Highway; beautiful driving roads with sights to appreciate.
The visitor centre is a good place to start your little adventure in this national park that measures more than 20,000 square kilometers (yeap, it is even bigger than Singapore itself!). It shows visitors the different species of plants and animals that can be found, teaches you about the different aboriginal clans that still reside and practice their traditions within the park, highlights where you can find the best viewing points and most importantly, where you can find aboriginal art drawings that are thousands of years old. And if you are driving, it also gives a daily update on which roads can be driven on, which routes are closed and which areas are accessible only by four wheel drives.
Being a park, I highly recommend comfortable shoes for walking and a little bit of hiking, lots of water due to the warm weather (temperature could climb up to 39-degree celcius), insect repellant, sunglass and a hat. I headed for an area called Ubirr, and my word; the wall art and views are truly spectacular here. 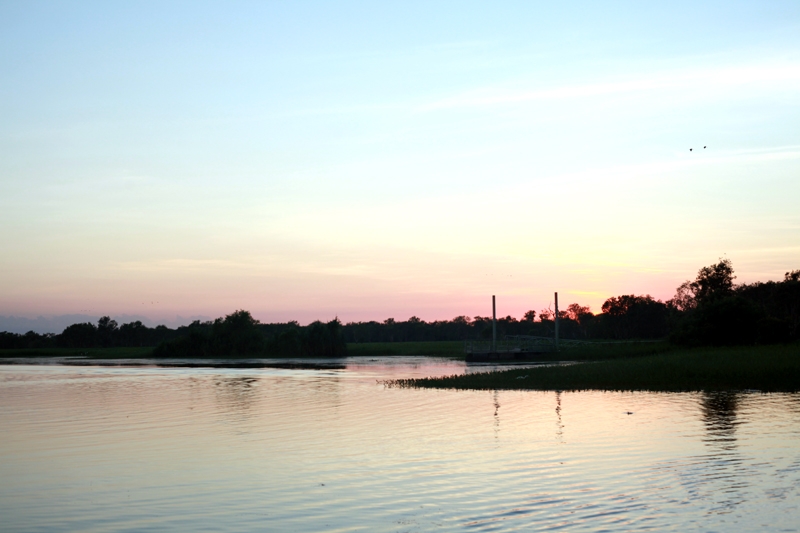 Spending my night in Kakadu (Cooinda Lodge), I woke up very early the next morning to catch the sunrise Yellow Water Cruise. And it was all worth it — remember all those nature shows you saw on National Geographic? Here at this wetland, you get to see everything LIVE with the sun rising in the background — really worth waking up early to catch this cruise. Besides crocodiles, you also get to see whistling ducks, magpie geese and kingfishers going about their daily affairs. Even the air you breathe is so fresh here… 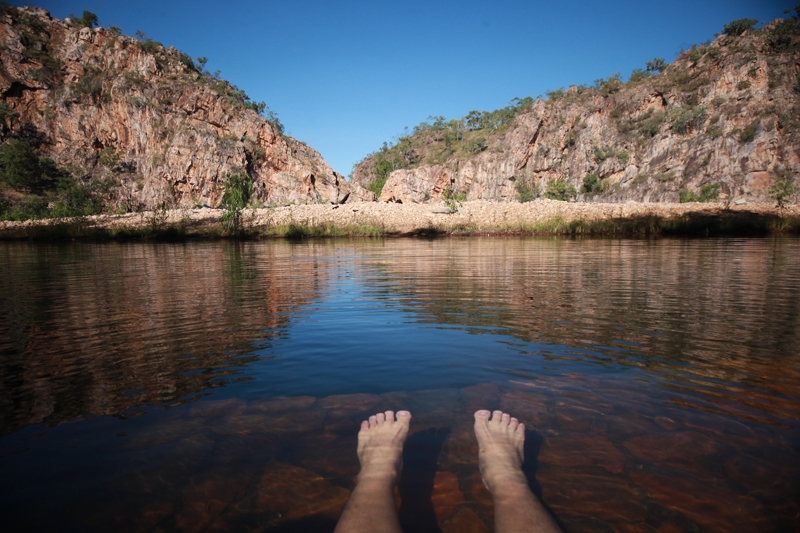 Edith Falls and Pine Creek
Located at the northern end of Nitmiluk National Park, Edith Falls — also known by its Aboriginal name, Lelyin — has a large fringed plunge pool that is a popular swimming area among the locals. After spending some time on the road, nothing beats a nice, long dip in the cold water that also offers you a spectacular view of the clear, blue sky and surrounding rocks!
But if you plan on spending some time picnicking in Edith Falls, you may want to drop by Pine Creek for supplies first along the way first. This small town, established in the late 1800s after a gold rush in the area, shows you the laidback side of Darwin, with small, friendly family-run eateries and convenience stores that feel so homely. So homely, I spent more than an hour here having my lunch, watching some TV and chit chatting with the locals! 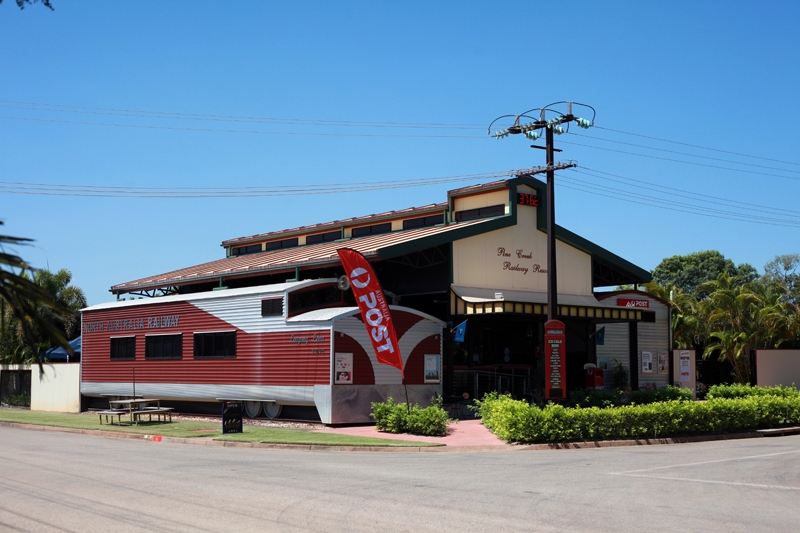 If you do need fuel or food supplies, simply drive down into the town of Katherine, located some 25 minutes drive away from the park. Do not expect any fancy shopping malls here though; instead, you can find supermarkets like Target and Woolsworth, which are well stocked for your essential needs, and eateries like a Chinese restaurant and a kebab stall too. 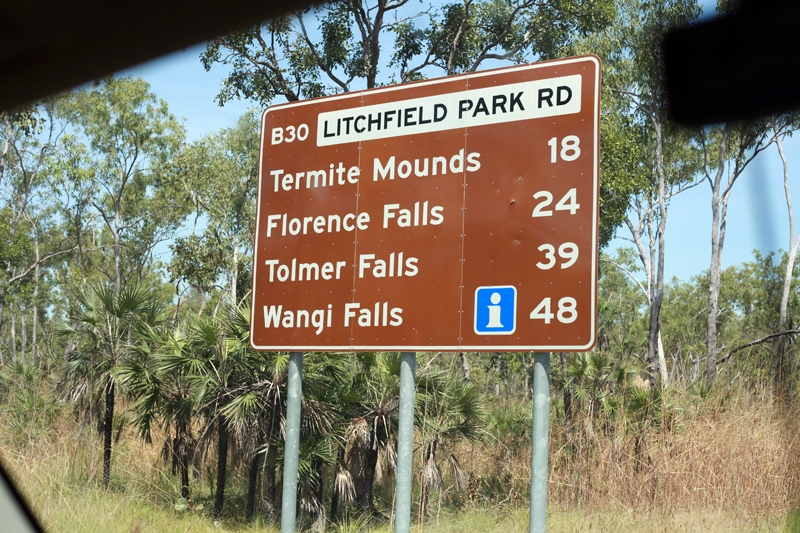 Litchfield National Park
Taking the historical Stuart Highway, it was time to make my way back to Darwin City. 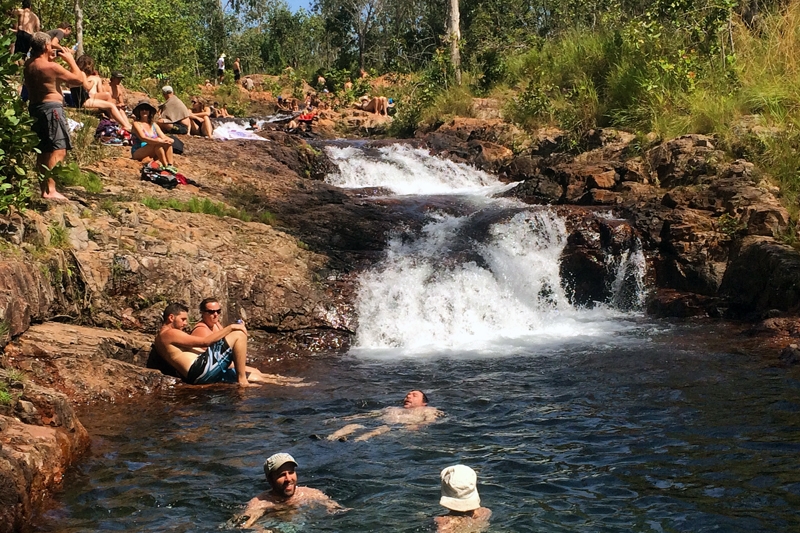 Along the way back however, a must do is to take a short diversion and head for Litchfield National Park, which is also home to water holes, like Buley Rockhole. This idyllic waterfall and plunge pool is, again, perfect after driving for hours under the hot sun and is easily accessible. There are also convenient toilets and changing rooms, so if you plan to just come-dip-change-leave, this water hole is perfect. It is quite popular among locals so do expect a little crowd here. But that said, it’s equally perfect for a picnic! You could stock up on your supplies at the small town of Batchelor, ten minute’s drive away from Buley Rockhole. 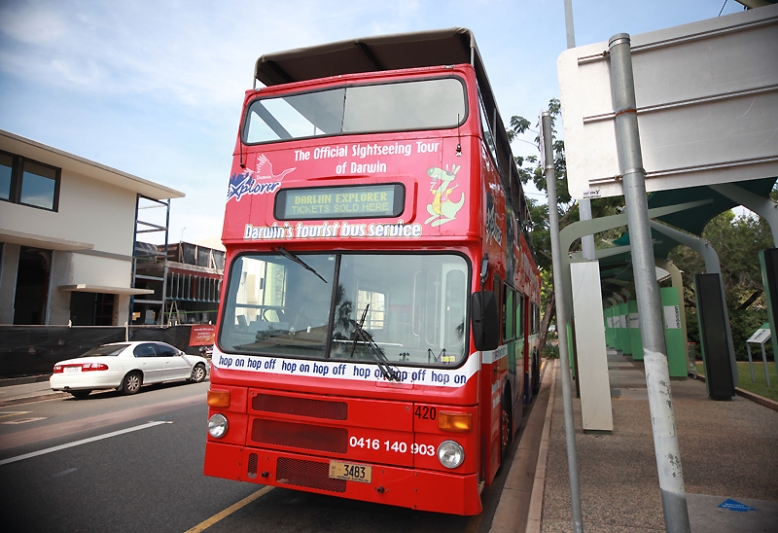 Once you have enjoyed the fresh cold water from the dip, the drive back to Darwin City is less than an hour.
After checking into DoubleTree by Hilton Darwin, I had a quick shower and change of clothes before hopping on the Darwin Explorer open-top tour bus, which brought me around (commentary included) Darwin City — the highlight for me are the Crocosaurus Cove (a crocodile sanctuary in the middle of the city that allows you to swim with the crocs) and the Museum and Art Gallery of Northern Territory (learn about the Aboriginal tradition and culture, and Cyclone Tracy that hit and devastated Darwin back in 1974). 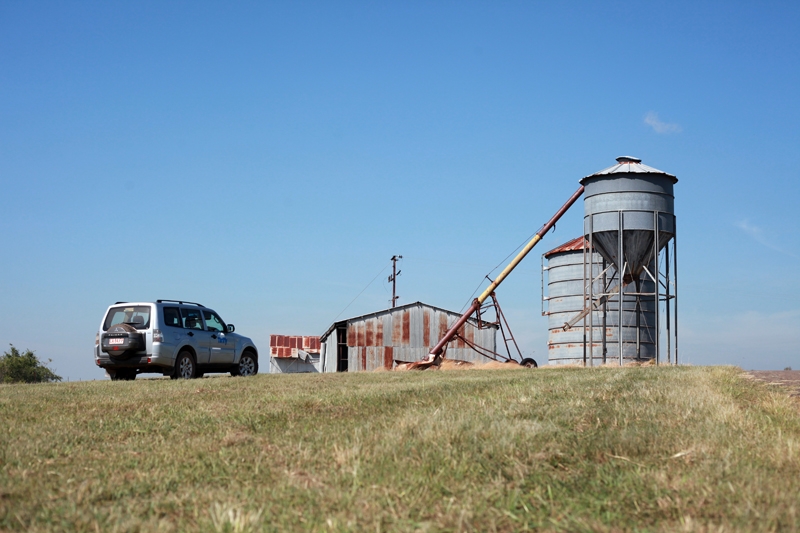 After seven days driving and exploring Darwin and its national parks, it is time to return to Singapore. A lovely experience for sure, and I hope you would give it a shot too - I assure you even a well-travelled, seasoned driver would love the driving here! Plus, with the June school holidays around the corner, you could even consider bringing the kids for a unique adventure.
Just don’t expect any shopping here though. However, the closest you could get are souvenirs and momentos... 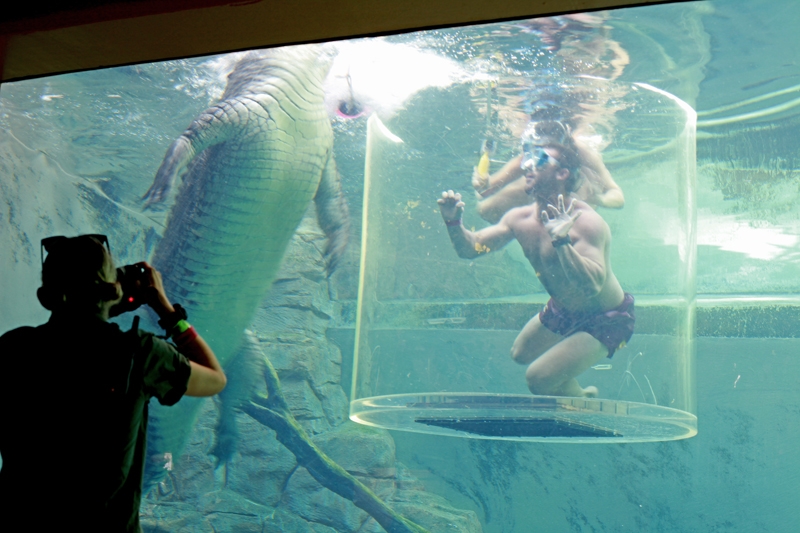 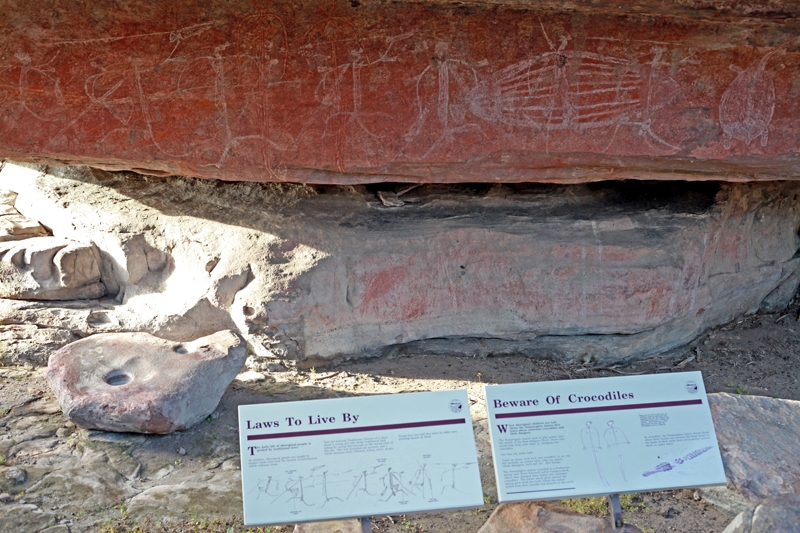 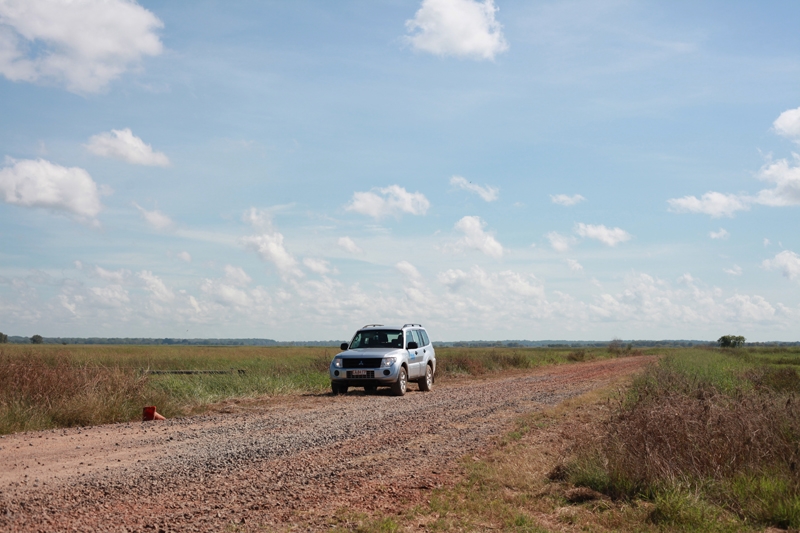 Feeling adventurous? Just venture into any random dirt road!
We would like to thank Tourism Northern Territory for organising this road trip specially for Burnpavement.com. For more information, log on to http://www.australiasoutback.com.sg