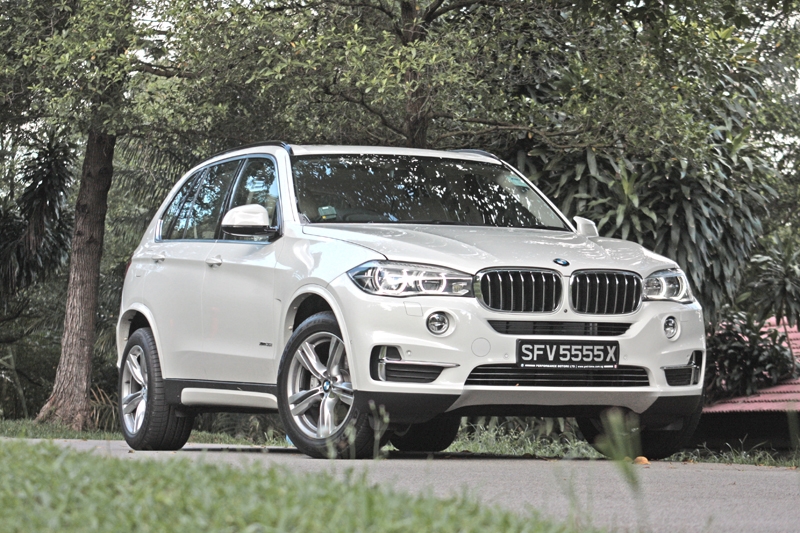 The new X5 was introduced last year with a rather big V8 engine and that made its popularity limited, but now with a more sensible 3.0-litre engine will it be more appealing?

In the sedentary world of SUVs, the saying ‘the bigger the better’ places an utmost importance. It’s because SUVs that are big puts you at the top of the automotive food chain; people will give you the right of way on the expressway, roadhogs will not be selfish and, best of all, you can carry the entire town with it.

Which was why, historically speaking, Volvo’s XC90 was once the people’s champion; every family men and soccer mums loved it. It has the cabin space of a 5-room HDB flat, the pace of an executive sedan (you have the option of a 2.5-litre turbocharged and 4.4-litre V8) and best of all, an easy to drive demeanour. Volvo’s renowned safety and reliability summed up the package. 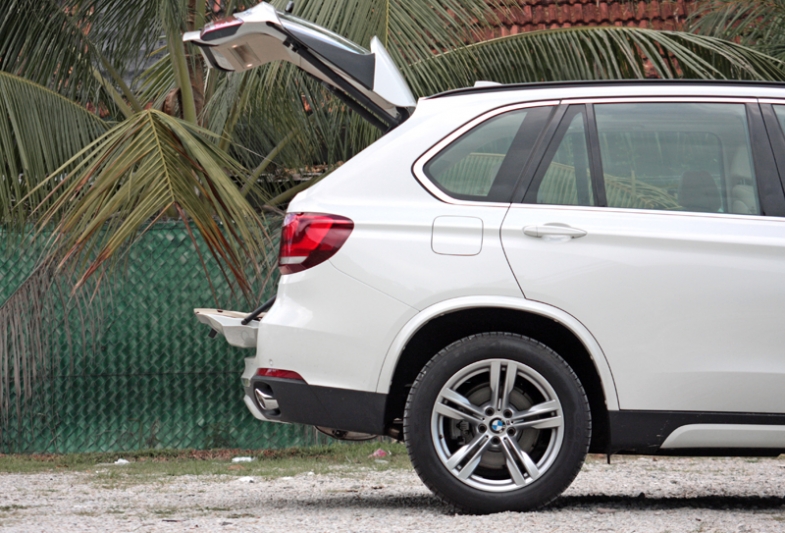 It was the Corolla of the large SUV segment during its time that was until the Germans caught up with the equally 7-seater Q7 and X5. There was also news of XC90 drivers ditching their workhorse for the Germans as an upgrade; the big appeals were the better build quality and, of course, badge upgrade. 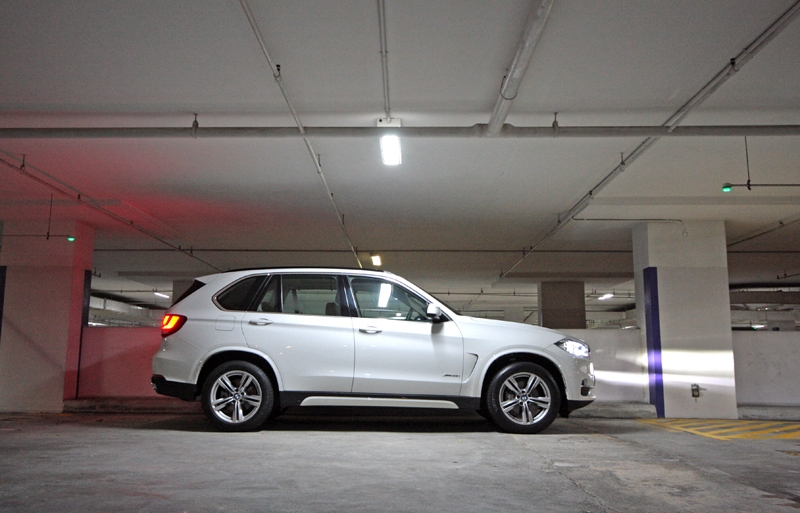 And it’s no guessing which model remained a favourite in the 7-seater SUV category right up to the end of its production: BMW’s X5. 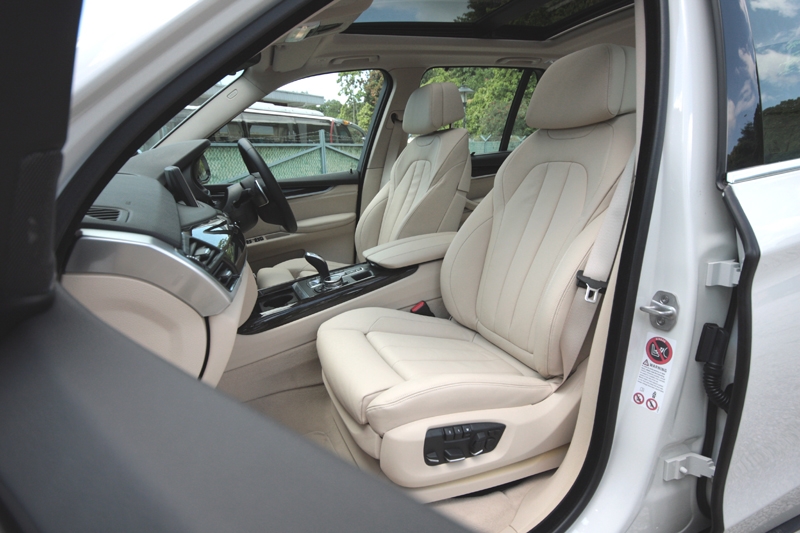 Which came to no surprise as it does offer a lot of car for the asking price, and on top of that, delivers handling finesse not normally seen in this segment. 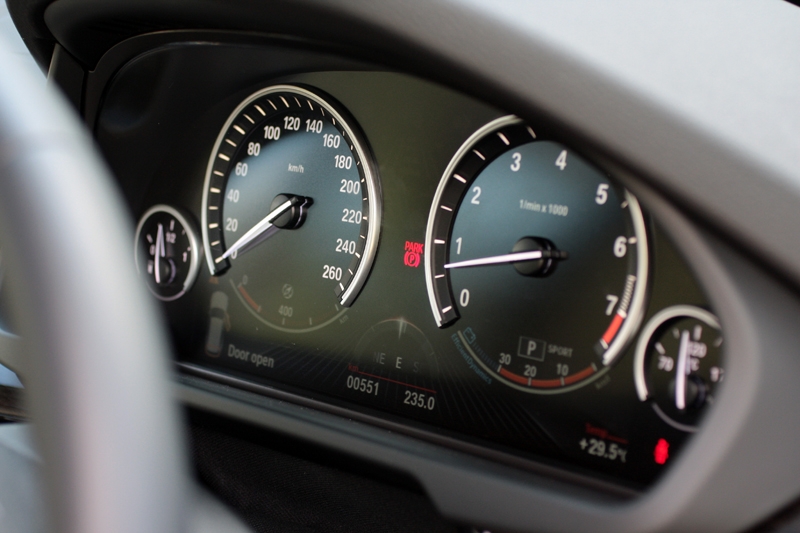 The third-generation X5, introduced here last year, remained impressive as a whole. It has the road presence, an intimidating face and a mad, growling ever-ready V8 in xDrive50i guise. But here’s the problem: there is too much power, no real space to exploit (unless you head up and down the North-South highway very frequently) and last but not least, is very thirsty. Even with Eco Pro mode. 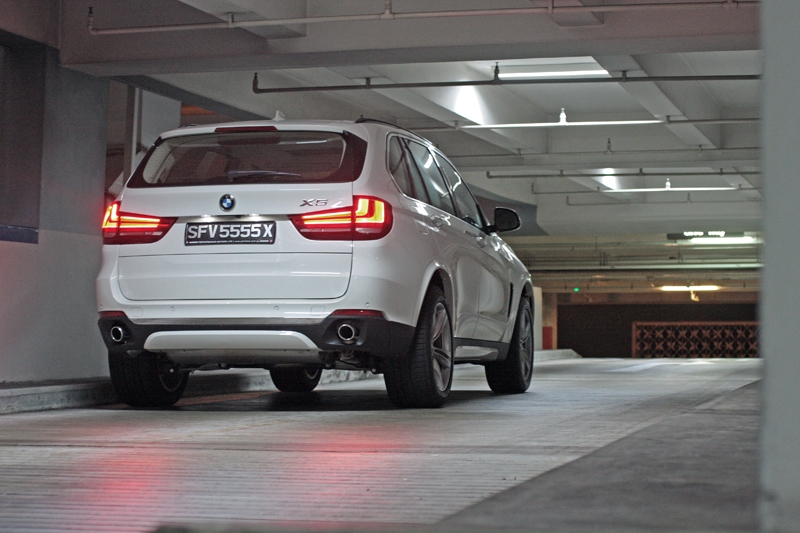 Hence the dismal sales figure. The diesel version was brought in too, but looking at how Singaporeans are still not warming up to diesel, that didn’t fare well too. 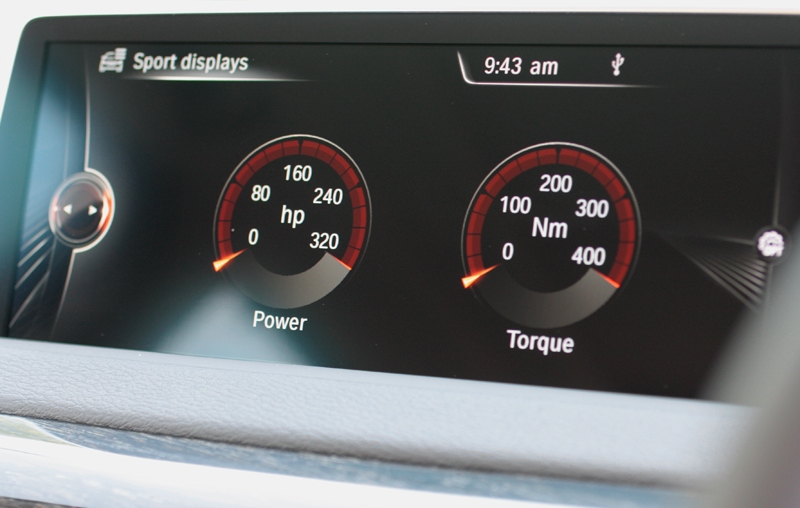 Now things could all change with this though. Quietly, BMW has brought in the xDrive35i variant, in hopes that it could improve sales for this SUV. 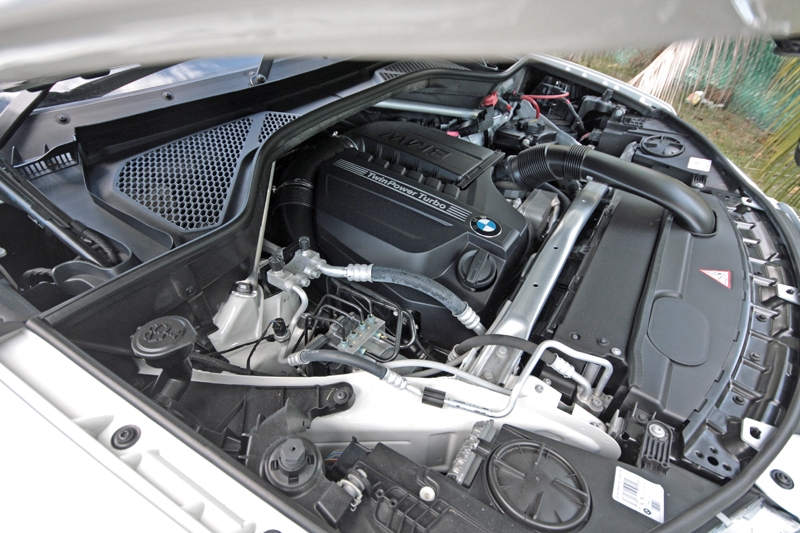 Under the bonnet here lies the all-too-familiar 3.0-litre, 6-cylinder turbocharged engine and mated to the ZF-supplied 8-speed automatic ‘box, produces 302 bhp and 400 Nm worth of torque which is available from as low as 1,300 rpm. Now, the latter is useful here considering it has to lug around 2.1-tonnes worth of metal and an all-wheel drive system. Despite all that, the X5 can still muster a 0-100 km/h timing of 6.5 seconds; mind you, that’s the same timing as the Golf GTI. 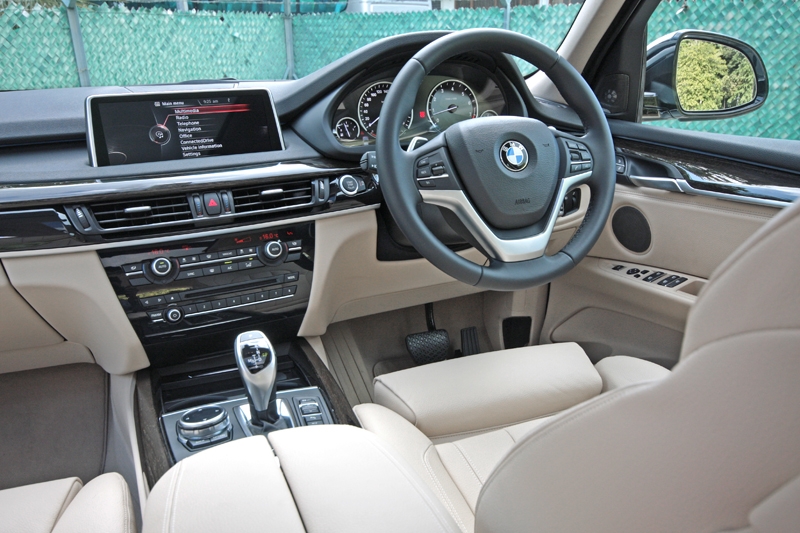 If rushing from one meeting to another or just punting from the school run to piano lessons/ballet class/football training is a daily affair, then the X5 is more than up to task. On top of accelerating in a very brisk manner while taking on other sedans and taxis in a traffic light grand prix (tested and proven, mind you), the X5 also cruises along the expressway in a very refined manner. The cabin is well suppressed against unwanted road and wind noise, and even the engine needs to be revved past 5,000 rpm for any sign of life; now these are all definitely welcomed for a change, as the last thing you need is to raise your voice even during a simple “How was your day?” or “What did you do in school today?” sort of conversation. Even if you’re asking junior who was seated all the way in the third row… 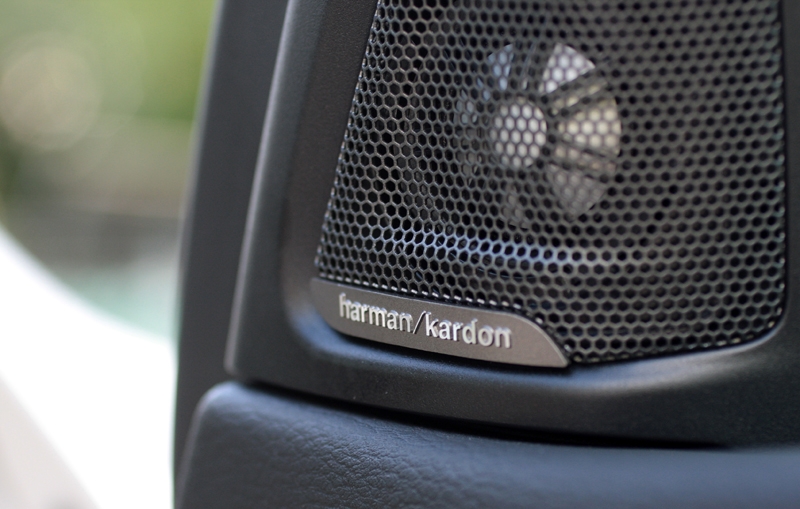 But when you’re alone behind the wheel and want to make things a little exciting, just swap to Sport mode, change your own gears via the paddle-shifter, blast the standard harman/kardon sound system and you should be able to have quite a ball of a time. 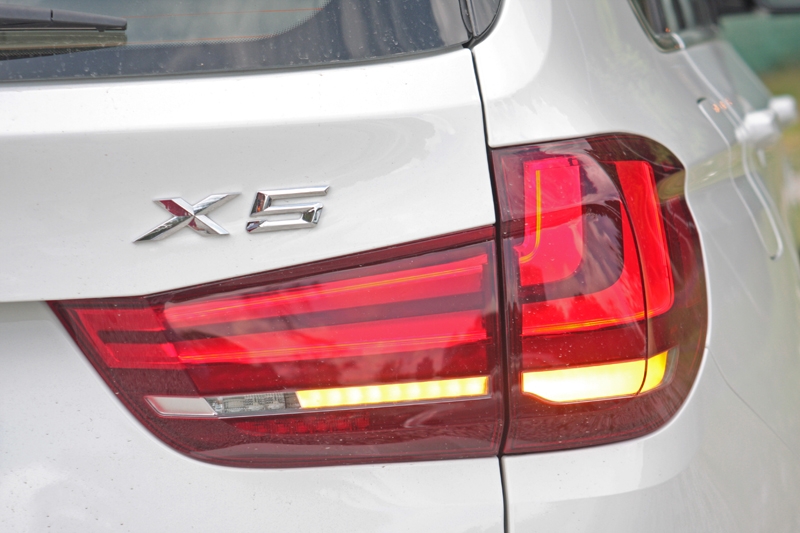 Because in true BMW fashion, the X5 still retains the handling finesse complimented further by the electric power steering that provided a good amount of feedback and weight. While it’s true you still get obvious body-roll along with pronounced body movements as you change directions, understeer is kept at a minimal and the active traction control readily ensures things do not get messy, preventing you from having to answer the 1,001 questions potentially posed by the missus if something unwanted does happen. In other words, this large SUV is definitely class leading in this aspect; BMW has done a very good job here. 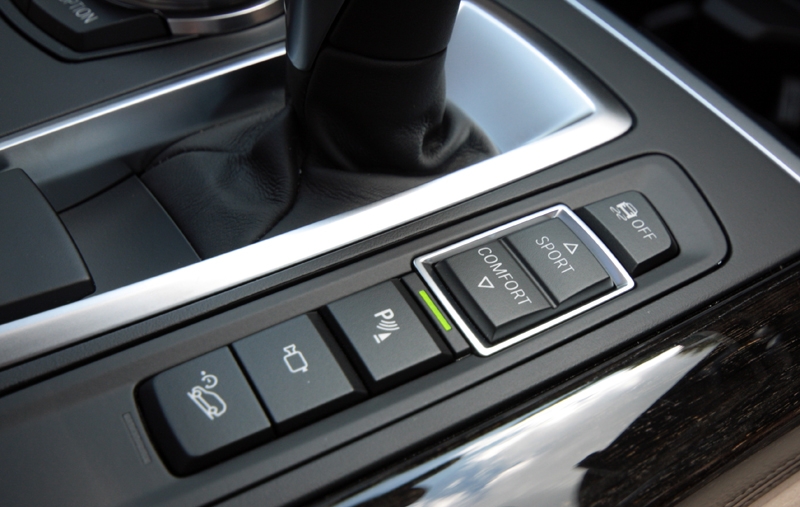 Interior wise, you get the usual BMW affair; high level fit and finish, good equipment level with the sun and panoramic roof combination coming as standard and a variety of storage compartments. Cameras and sensors to aid your parking manoeuvres or be extra eyes as you exit the lot or enter the main road from the carpark makes it all better. 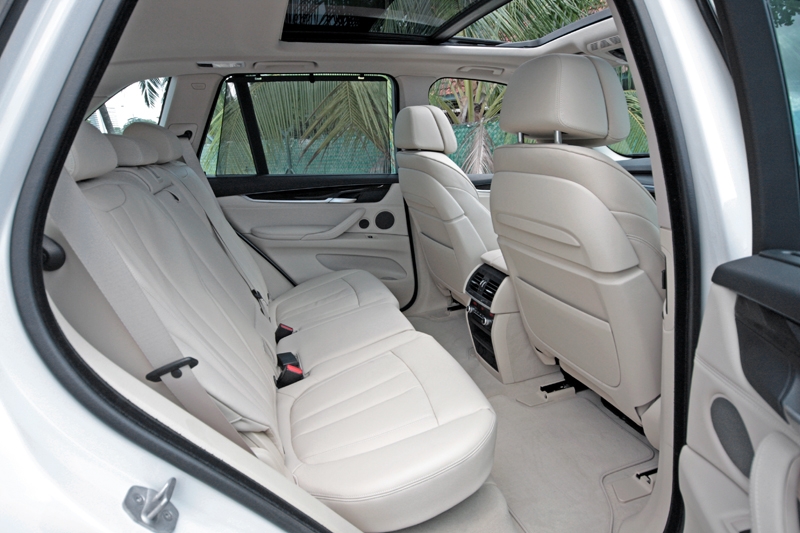 With three rows of seats, you can definitely lug around the entire family. The second row seat is flexible enough in letting you select a myriad of backrest angles along with the amount of legroom needed. The third row, on the other hand, is best for the kids… or that annoying brother-in-law. 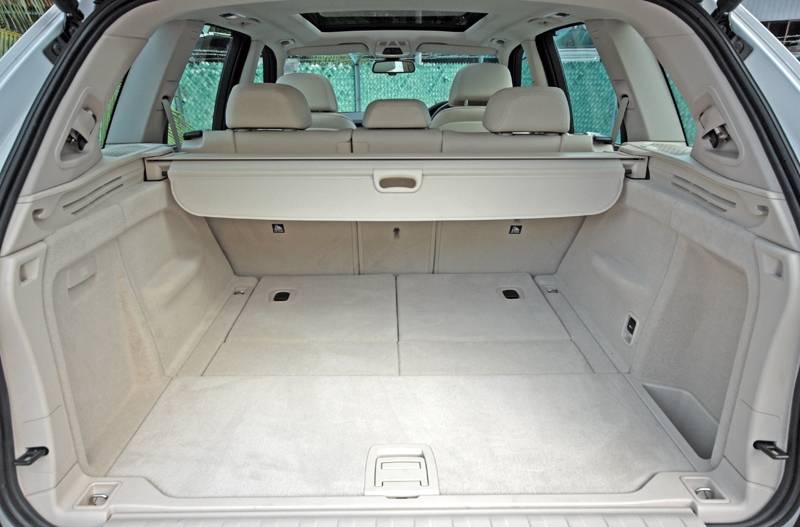 Boot space is another impressive feature of the X5. With the third row stowed away, you have 650-litres worth of space to utilise; put it away and this goes to 1,870-litres. But it still is lesser than both the upcoming Q7 that offers 770-litres and 1,955-litres and XC90 which, although has the smallest 451-litres with all seats up, expands to 1,951-litres.
As a whole, the X5 xDrive35i remains a practical and useful large SUV, offering BMW’s handling capabilities and good pace. To be even brutally honest, it’s quite the bang-for-buck proposition for now, which starts from $352k with COE; even the outgoing Q7 still has a price tag of $366k.
Until the new Q7 and XC90 arrive, the X5 will be the best large SUV of the hour.