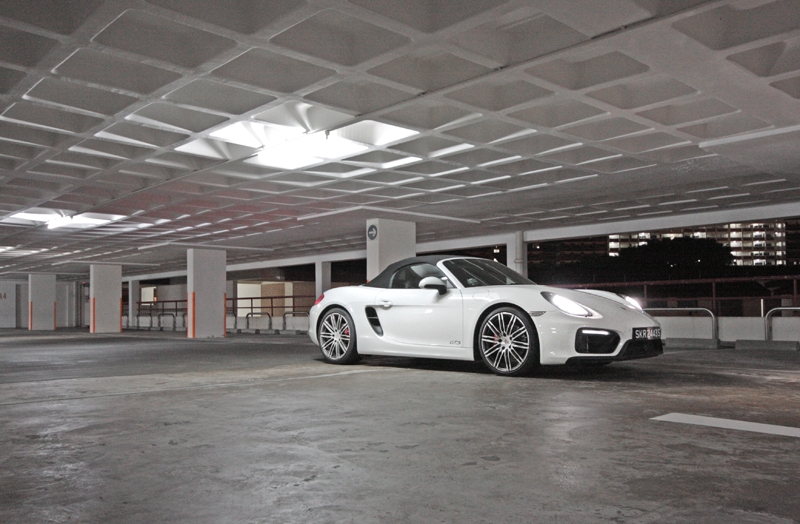 Until any sort of news on a GT4 Boxster pops up, petrolheads with an immense love of topless driving will have to be contented with the GTS; and that’s not a bad thing either

Open top motoring is something that has to be appreciated, especially if you also have a raring engine paired to a beautifully set chassis. Well, you don’t have to look so far up the motoring food chain for an answer – just look at Honda with the S2000, Lotus with the Elise and to a certain extent, even Mazda with the MX-5. Oh, and also how could I forget about Audi with their TT Roadster.

But exactly like the course of nature, owners of such cars would want to upgrade their cars when the right time comes. And naturally, Porsche’s Boxster would come to mind for this bunch. 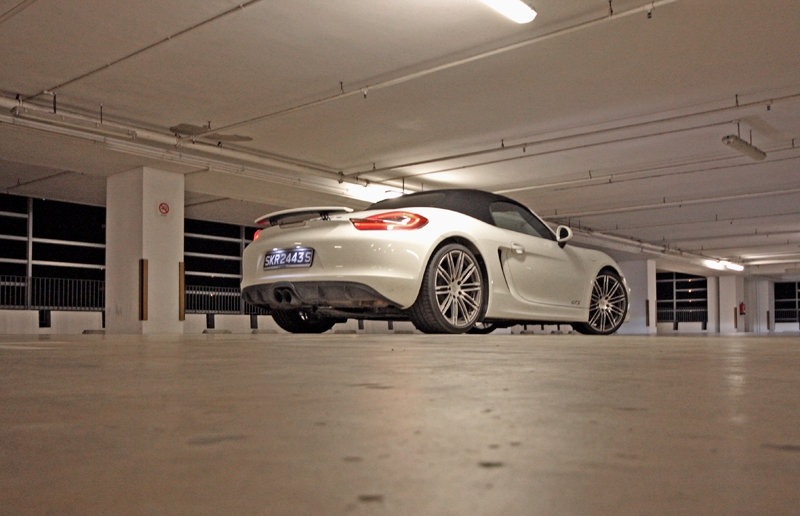 Then again, the current 981-generation Boxster — despite the brilliant chassis — still needs some more oomph in the engine department. The Boxster S on the other hand, could still do with a teenie weenie little bit more suspension rigidity.

So obviously Porsche knew jolly well of this issue. Hence, the GTS version of the Boxster - in other words, the ultimate Boxster. 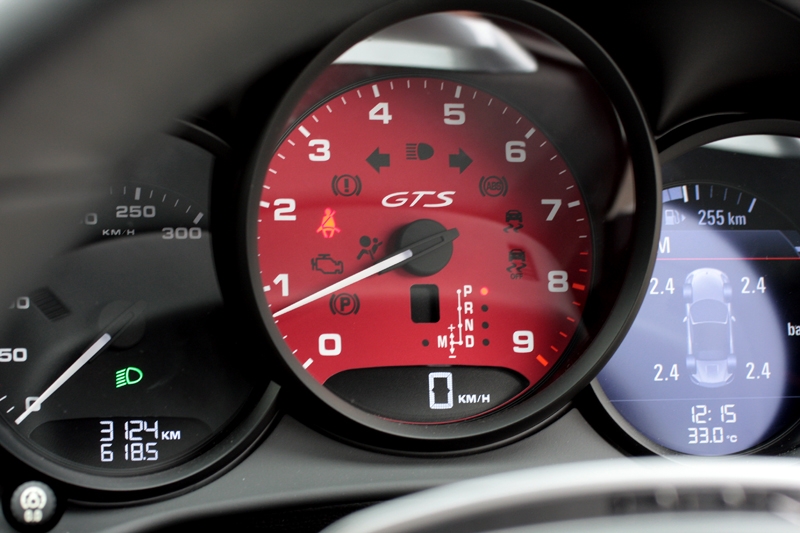 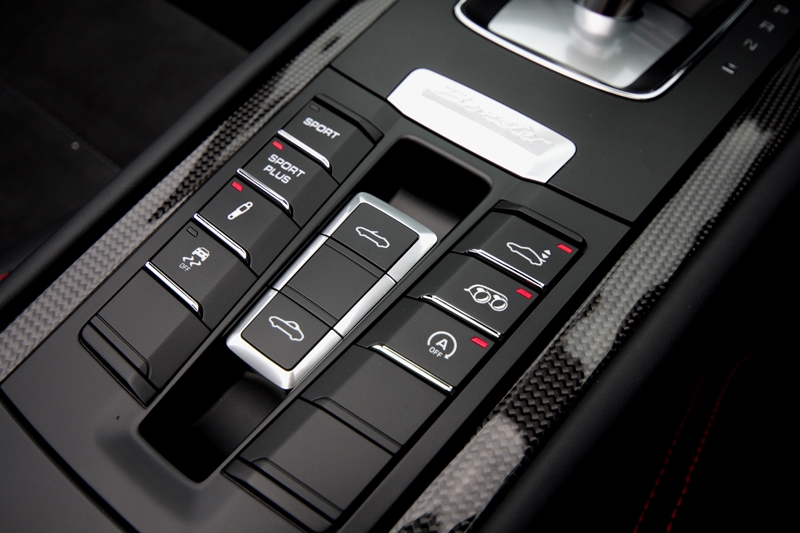 In the real world, the GTS does match up to the on paper figures — and that is impressive mind you, looking at how the Boxster is generally known as the ‘hairdresser’s special’. Floor the accelerator and you will rocket forward at such an unworldly pace accompanied by the roar of the sports exhaust; it gets rather addictive when you stow the roof away and stick to gears three and four in the CTE or KPE. At the same time, the crackle and pop are enough (a) to tell the world of, well, your glamorous arrival and (b) everyone should just get the hell out of the fastest lane. 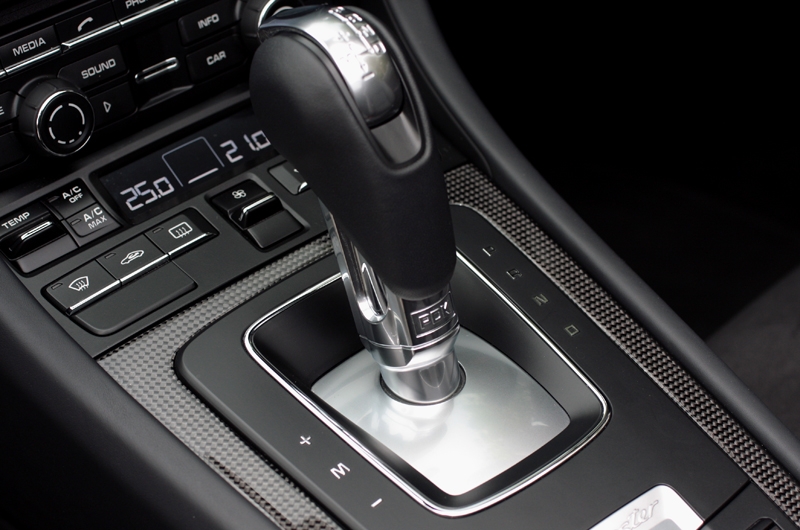 In true PDK fashion the gearbox works wonderfully, as if it has the telepathic capability to read your driving pattern even way before you put the key fob into the ignition; it shifts up at the right moment you want it to, and downshifts just went you needed it to, either to go wild into the bend or simply to overtake. However this being the ultimate Boxster, shift shocks can be felt especially by the passenger; this would be a culture shock for those too pampered by something, say, Lexus-ish. Whatever it is, it sure is much nicer to drive than the base Boxster or Boxster S. 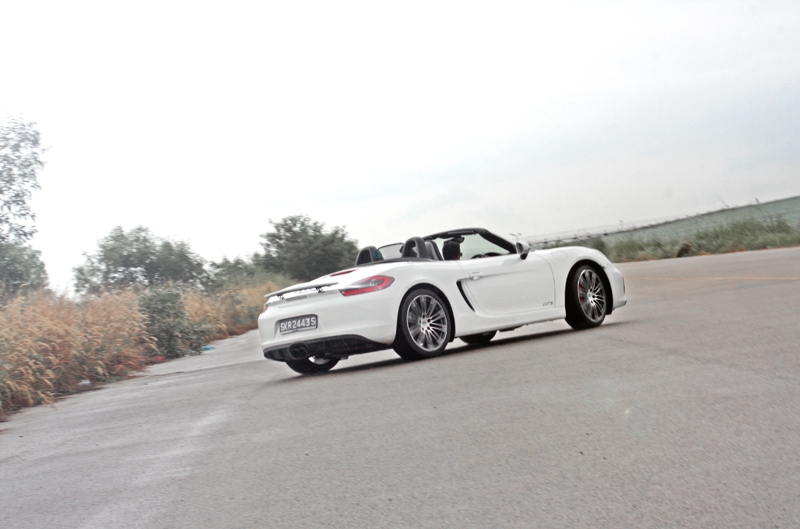 For a mid-engined, rear wheel driven roadster, the GTS is endowed with a brilliantly tuned chassis. Besides the lowered ride height and stiffened springs and bushing, the steering is well weighted and delivers what must be among the best amount of feedback; the nose points exactly where you want it, understeer is next to non-existent and it just feels so right to be thrown fast and hard into tight corners and even off-cambered bends. So much so I was left wondering, a lot of times while behind the wheel, “What sort of sorcery is this?” This is the sort of thing the Z4 sDrive35i could only dream of, while the outgoing TT-RS (we can’t compare the new TT Roadster yet, though) could only wish to match. 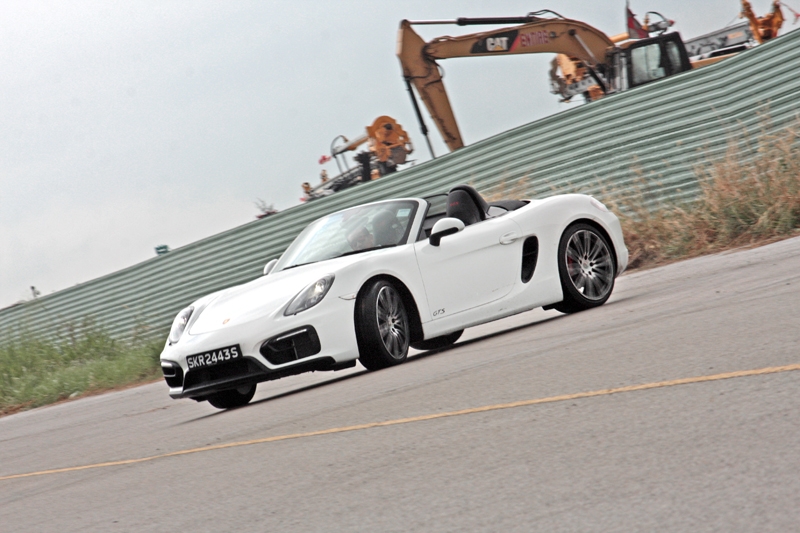 Of course, you could play hooligan with the GTS, and it’s not hard to do so. To get the rear kicking out, simply switch to Sport everything, off the traction control and you can happily laugh sinisterly as you leave trails of smoke behind while flamenco-ing away; useful particularly at chasing away mosquitoes… 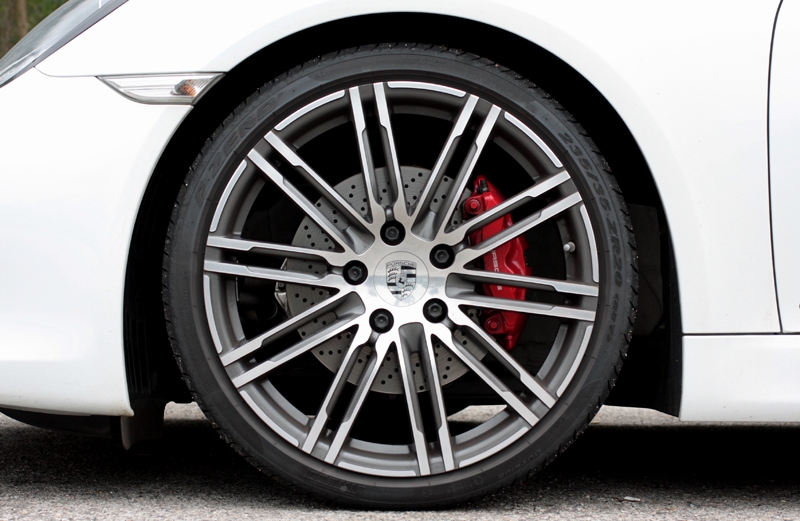 The brakes are equally brilliant, with enough weight and not the sort of over-servo’d set that makes your eye pop when you apply extra pressure on the middle pedal. And depending on the sort of priority you’re looking for in a driver’s car, the Boxster GTS’s ABS won’t intrude until the last possible moment when the ECU figures, “Okay he does need some help to slow down” — in other words, it’s just you and your instinct until it decides to come in to correct things. I like that; it makes me three-quarter driving God in that sense. 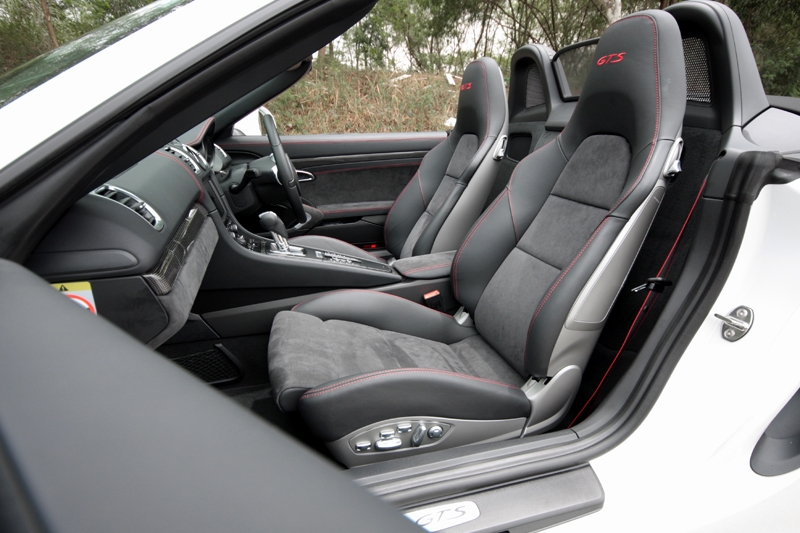 Interior wise, the GTS has the typical Porsche quality and architecture; undeniably boring, but it works very well as every control buttons are easily reached by the driver. The pair of sports seats is definitely a welcomed addition; the base Boxster’s feels a little flat while the Boxster S’s could do with a little bit more side support. This one here provides the best lumbar support for the driver and at the same time, hugs your body tightly meaning you don’t have to worry about sliding around foolishly as you attack one corner to the other. The red stitching makes it all the more sweeeeeter. 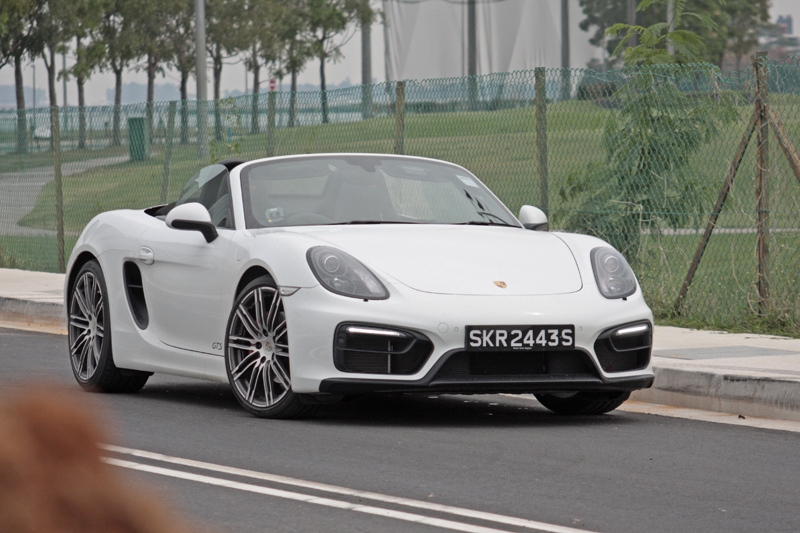 And so the Porsche Boxster GTS is one wholesome Boxster with an ebullient driving character. It is properly sticky and responsive, and delivers all the right notes; as you can see, there’s nothing to fault and Porsche deserves a round of applause for this. 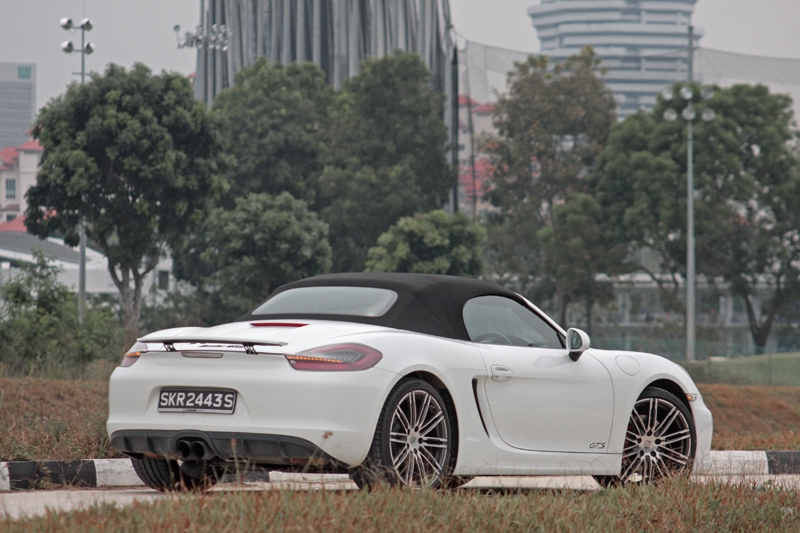 Here’s one ‘but’ though: it still feels clinical and a tad safe, and doesn’t quite excite. The V6 Jaguar F-Type, yes, that’s the one I would put my money on — exciting, fun, unique and the sort that roars loudly to warn others of your arrival. Growwwl… 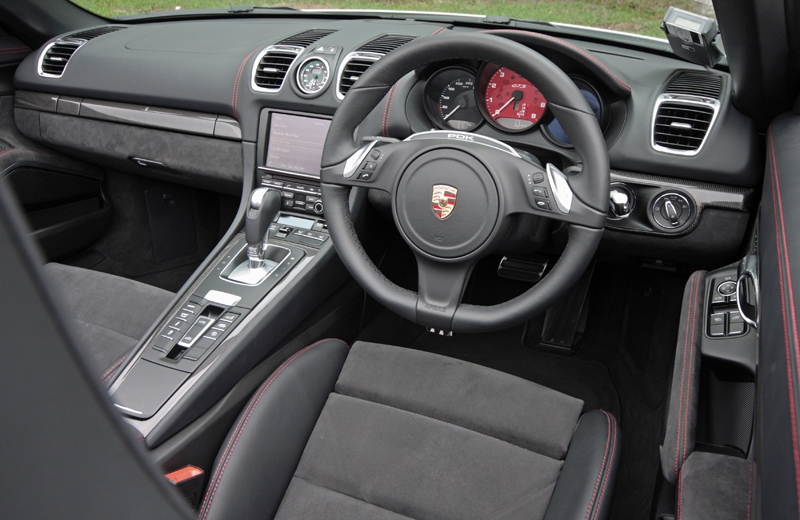 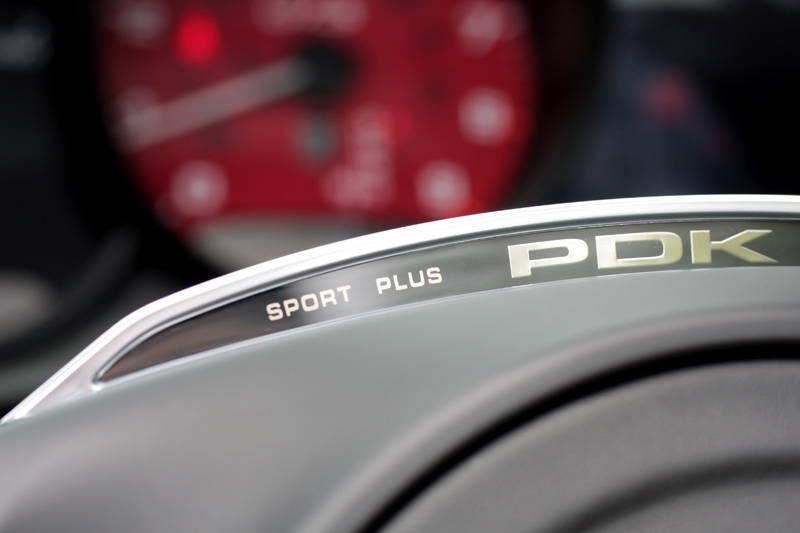 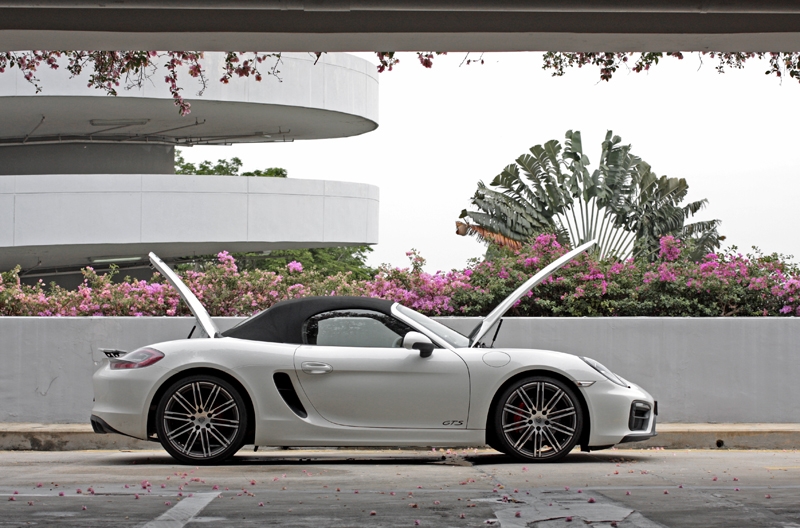