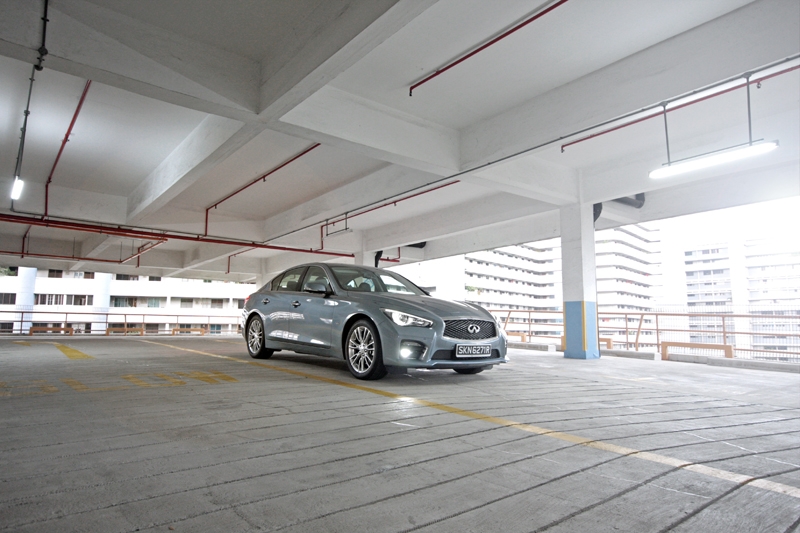 It’s a monumental task for Infiniti’s compact executive who has to face BMW, Mercedes-Benz, Audi and Lexus in this very challenging segment

Infiniti won’t exactly be the first brand that springs to mind when we talk about compact executive sedans. In fact, it’s the brand that is not in anybody’s mind too, based on a casual poll among some fellow friends who signed a decade of their lives with banks to own their first Beemer, Merc (pronounced as ‘merk’) and Audi (locally called ‘or-dee’). At least Volvo still gets mentioned in this poll. But Infiniti? It felt like explaining the Periodic Table to these ‘Germanised’ bunch.

And here’s the whole problem. Infiniti is, infinitely (see what I did there?), insignificant among local buyers; which is a real pity considering how beautiful their cars are. 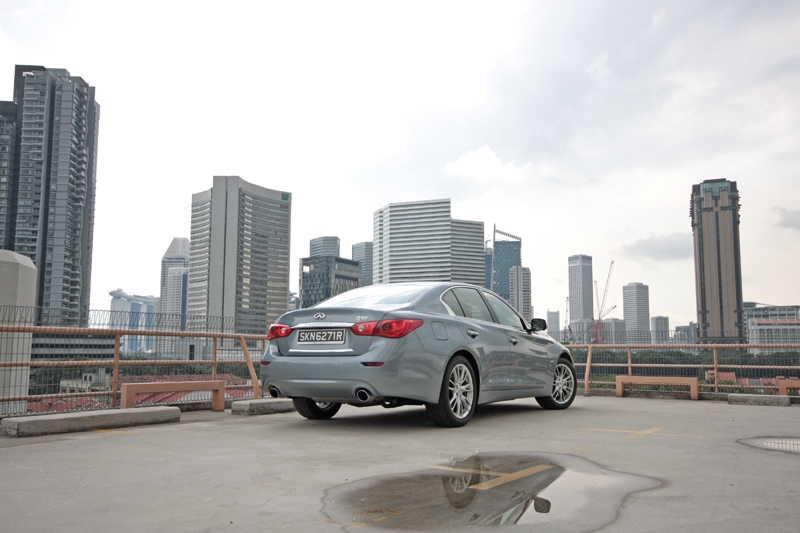 So previously the biggest problem the brand had here in Singapore are the big-engined models. But now, here’s one model you should take a closer look at, which is the downsized, force-fed Q50. 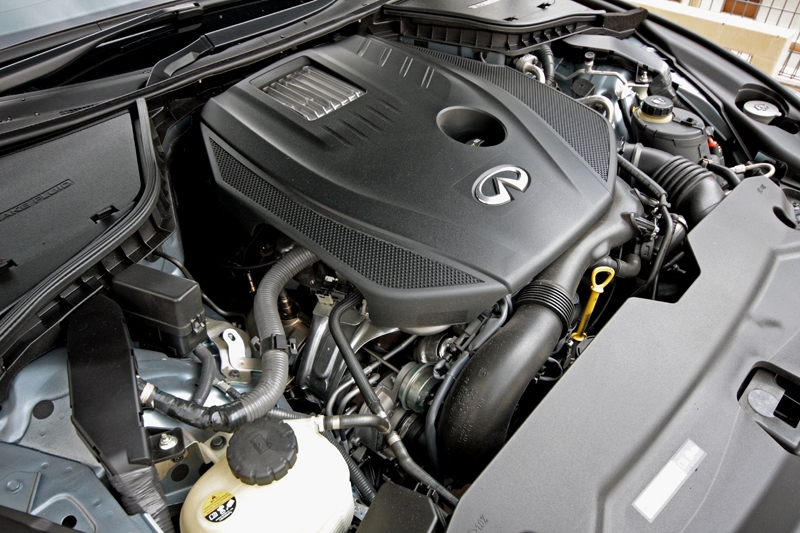 Now this is the interesting bit. Infiniti knows that in order to keep up with the rest of the competition, they needed to downsize their engines; and so they approached Mercedes-Benz for technical help. Seeing how fat the cheque Infiniti was dangling, Mercedes-Benz then decided to provide the 2.0-litre turbocharged engine (similar unit seen in all Mercedes-Benz’s ‘250’ range) and also 7-speed (but not the dual-clutch ‘box though) automatic transmission. 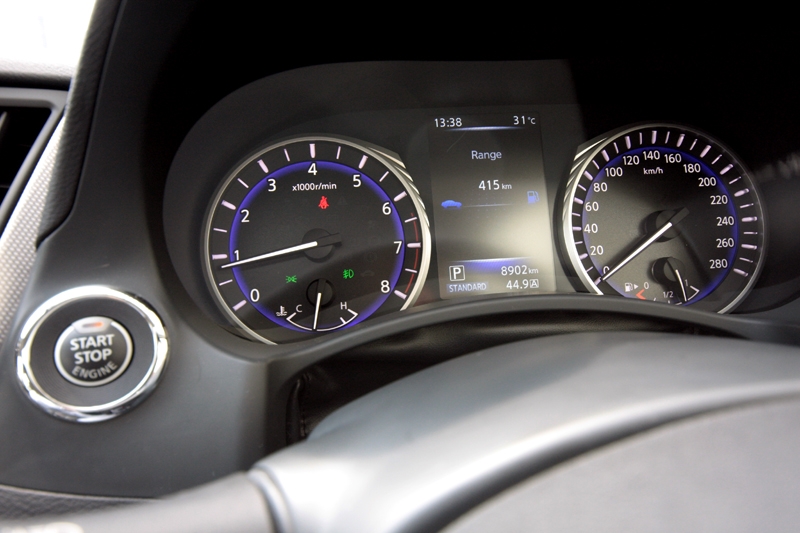 Hence it’s a Japanese car with German mechanicals; now this is a whole new concept of hybrid altogether… 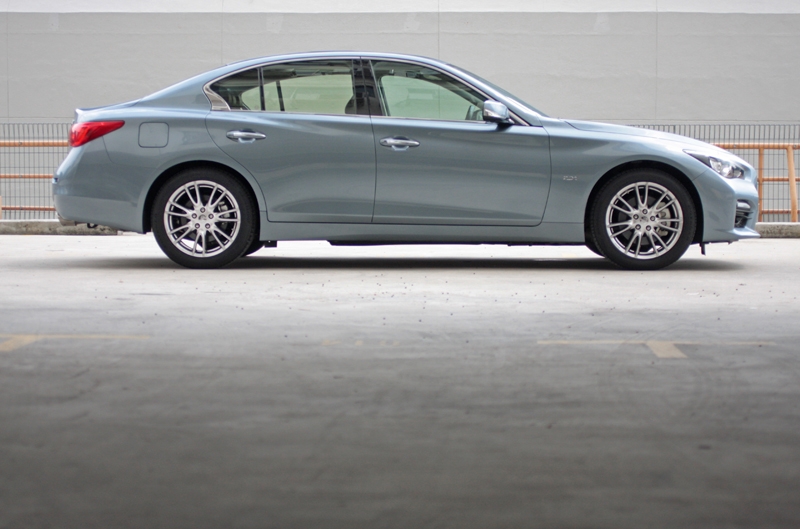 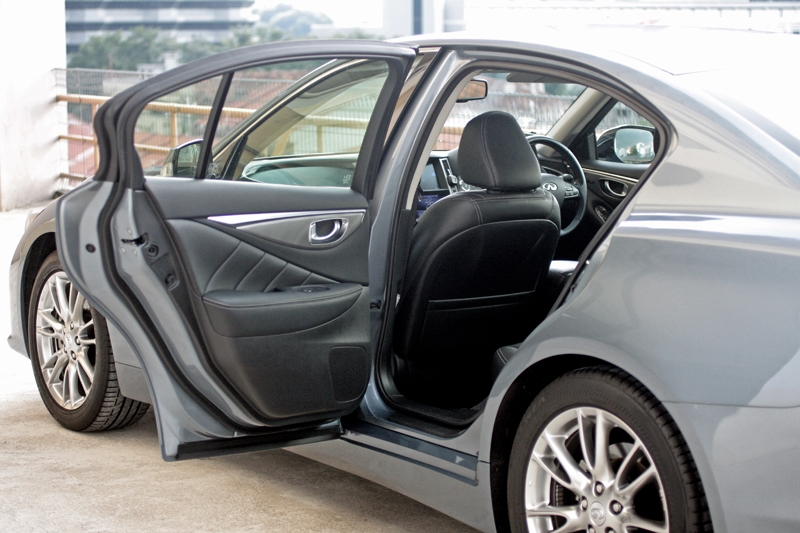 To be honest, you do feel the weight bogging down the car slightly when moving off the traffic light junction; if it’s an all-wheel drive, I would probably close one eye, but when you’re competing with established players, you need to do something to ensure it can keep up. 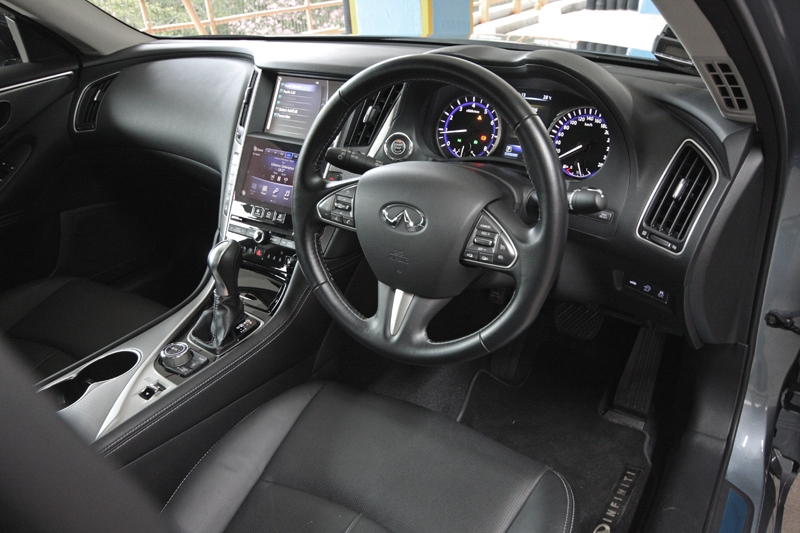 That said however, as you move along, the Q50 feels all prim and proper without much hesitance from either engine or transmission. To be frank, it does feel substantial and without any fear of losing out to either the 3 Series, A4, C-Class or even IS. Even as you cruise on the expressway, you cannot help but notice how well suppressed the cabin is from any sort of wind or road noise. Unfortunately, a pair of paddle-shifters is missing so you can’t really play hero and show off here; if you can link up with a brilliant F1 team, I don’t quite understand why you cannot make paddle-shifters a standard option here, Infiniti. 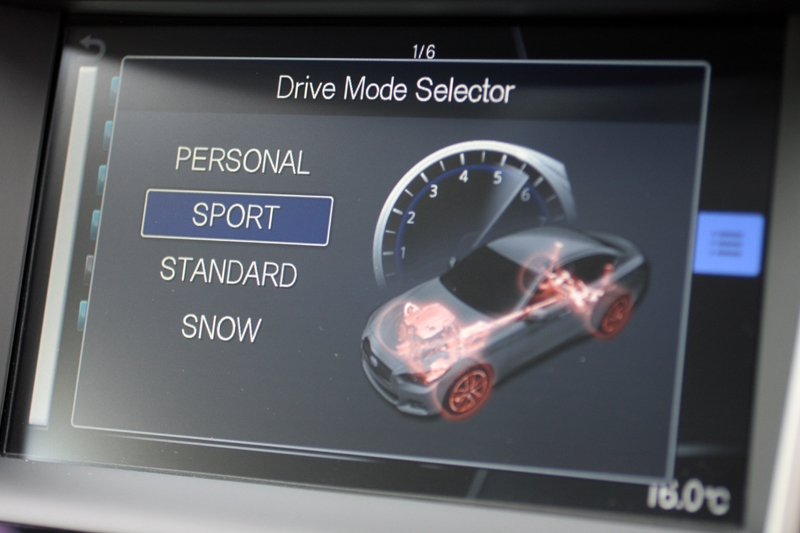 That aside, the Infiniti (and beyond, ha… ha…) Q50 also comes with a Drive Mode Selector; it lets you choose which mode to drive in, for example Personal, Sport, Standard and Snow. Like the ones seen in the Beemer, Merc and Audi, the car’s throttle, engine and suspension will adjust according to your mood of the day. Not that it makes any noticeable difference here, because it works well enough in Standard. 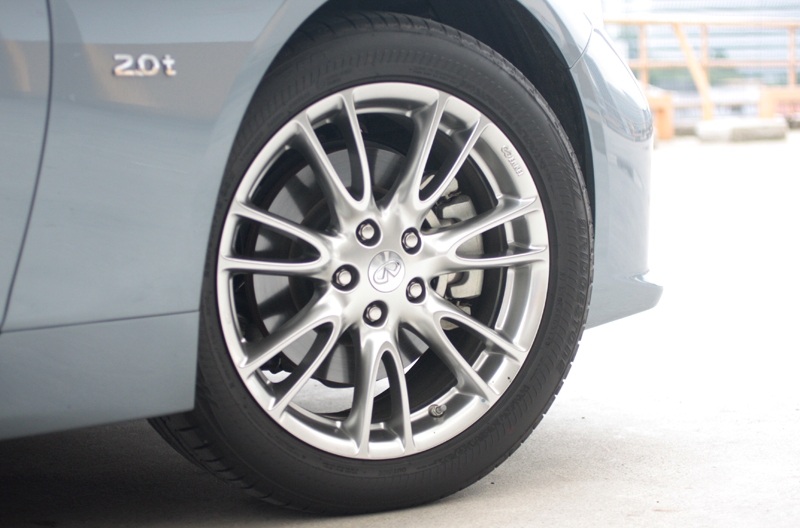 This being a rear-wheel drive, it is quite a competent handler. Well at least it’s safe to say I get more confidence out of the Q50 than in an F-Type R Coupe; grip is constantly in order. Although Infiniti has also adopted a rather complicated steer-by-wire system, you still do get good weight and response when throwing the car down a series of bends. Body movement is very balanced as well, feeling relatively close to the 3 Series; well played there, Infiniti. Even the brakes are alert and it’s easy to get used without feeling over-servo’d. 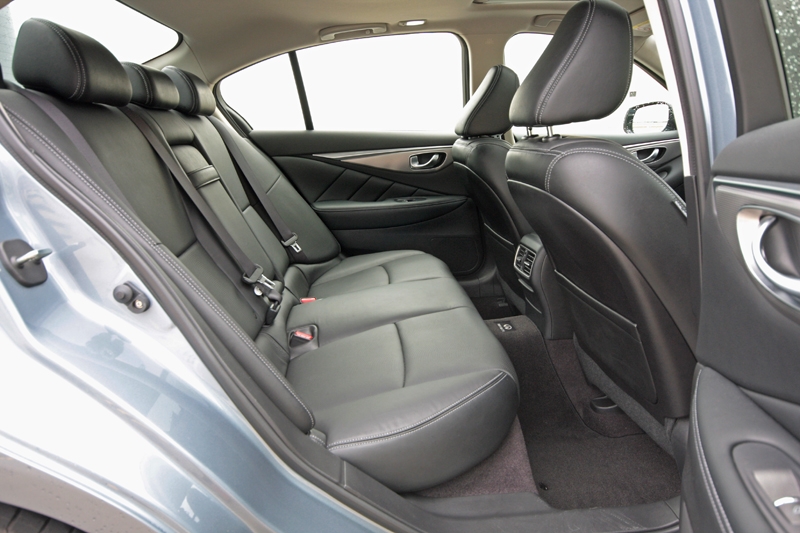 The interior is an exponential place to be in. Now I’m not trying to get into the good books of Infiniti, but it has the best and most comfortable seats — yes, both front and rear - when you compare that to the rest of the competition. I emphasize my point once again. It has THE best. I thought the ones in the Lexus IS250 was brilliant, but surprisingly, the Q50’s brilliant-er. It provides enough support and cocoons you really, really well; you can imagine how it will treat your back in a long-distance drive. 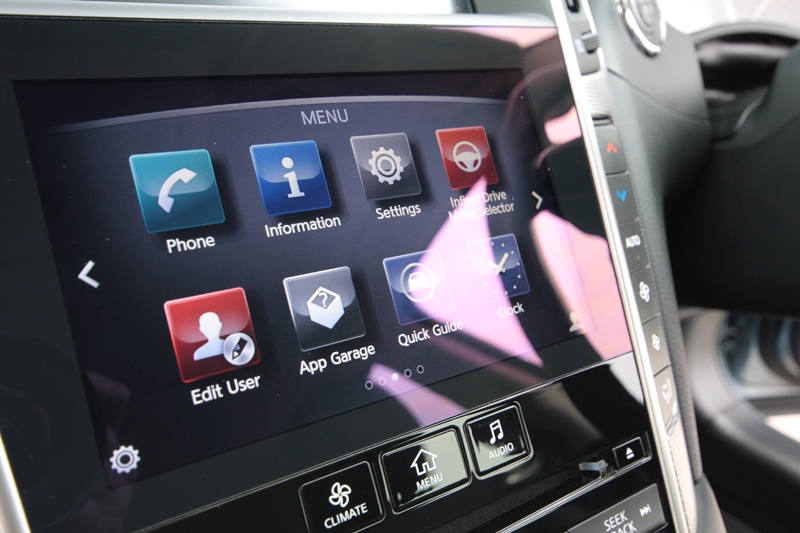 But not so brilliant though is the cockpit. Ok, so the controls are all clear and idiot-proof, but the steering wheel is a tad too big and you need to get used to the two-tier screen. If you must know, the screen below obviously tries to mimic an Android phone with touch-screen and ease of use while the one above is specifically for you to toggle with the Drive Mode Selector. 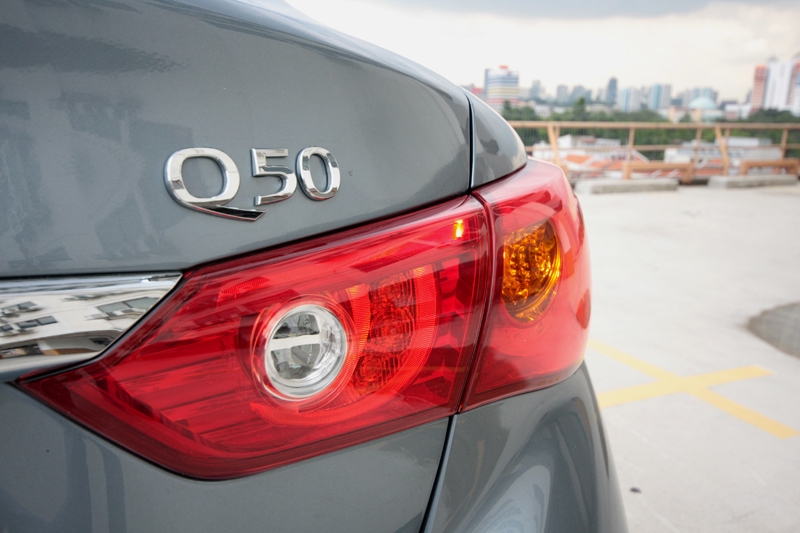 So as a whole, the Infiniti Q50 2.0t won’t be the chart-topper today. It still needs some tinkering and more substance in order to make it substantial in this really tough segment. But to dismiss it and think nothing of the car, now, that would be stupid of you. Because of how surprisingly satisfied I am with the car and how utterly different it is from the rest, I would put my name down for one. 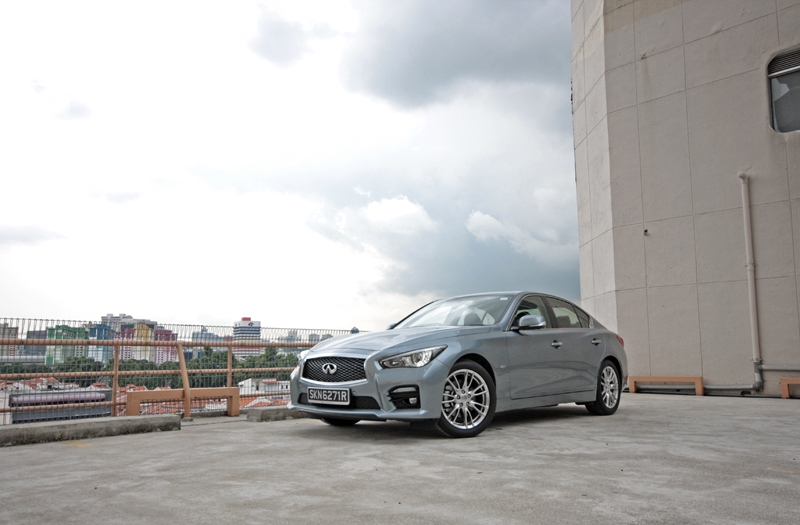 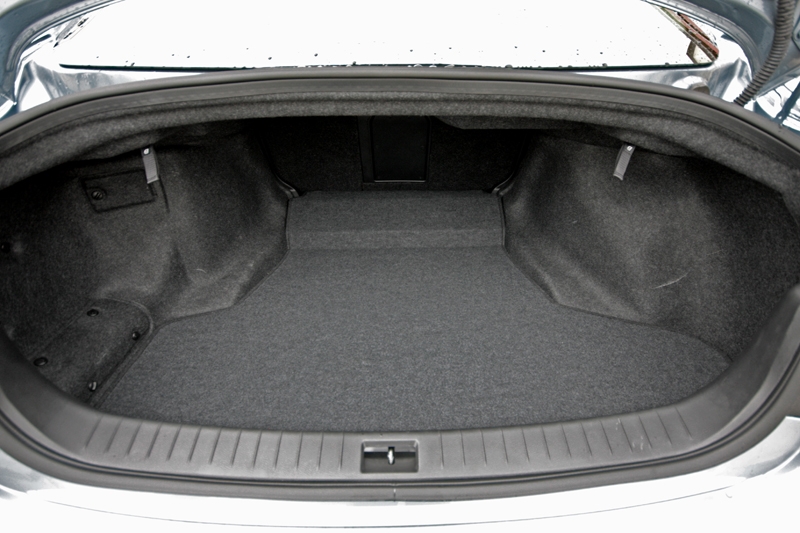 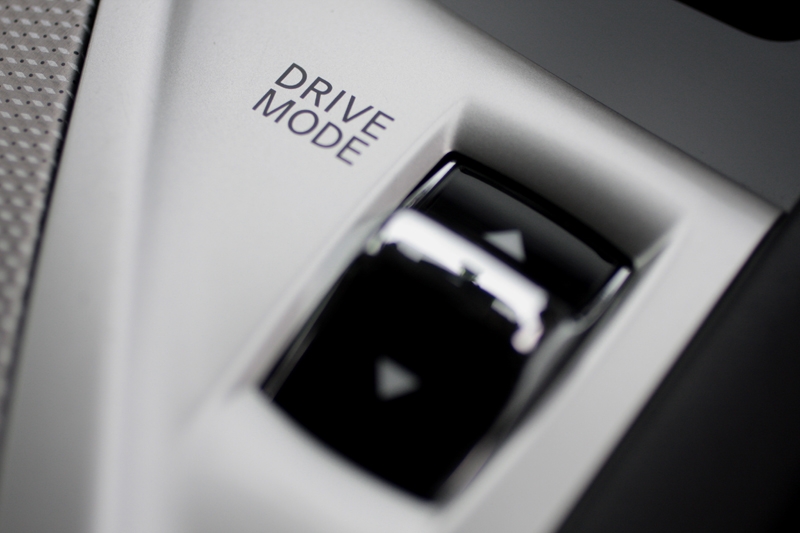