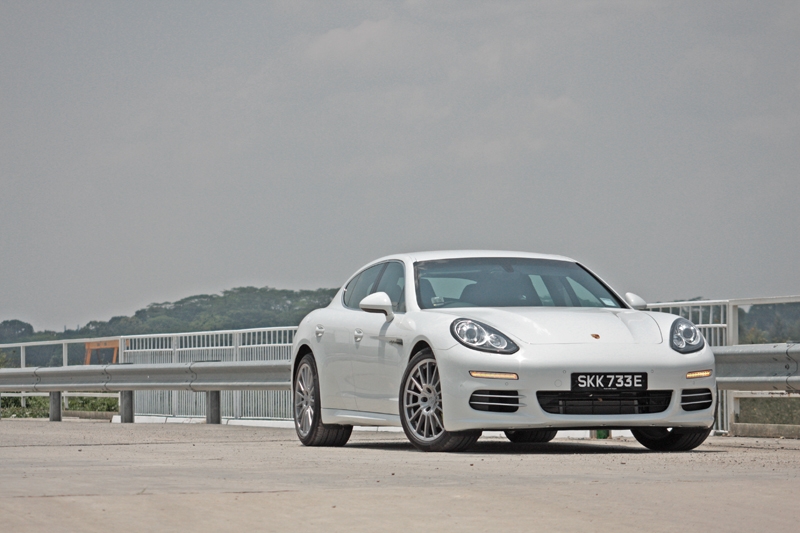 The Panamera was once widely known as the second ugliest Porsche after the Cayenne, but obviously over time, also like the Cayenne, it grew on people. Which was a good thing, as that made Porsche financially profitable and gave moneyed buyers more options; so now if you want a Porsche, it is not just a 911, 911 Cabriolet, 911 this and 911 that. You have the Boxster, Cayman, 911, Panamera, Macan and Cayenne. And mind you, each model also comes with 1,237 other variants. Ok, maybe not that much but you know what I mean.

The car we shall talk about today is the Panamera S e-hybrid. Then again, some of you avid Burnpavement readers may question why on earth we’re reviewing a hybrid Panamera again, because we’ve done it before. 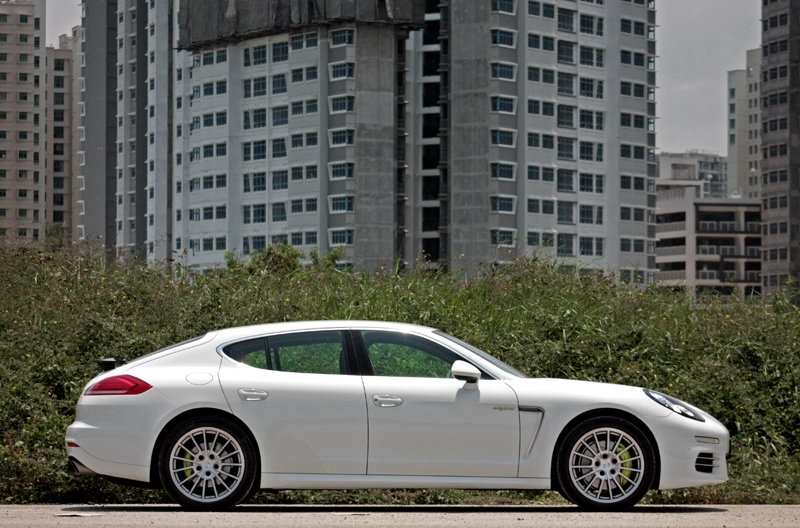 Well, times have changed you see. About two years ago, Porsche introduced a hybrid system, implemented it onto the Panamera S and called it the Panamera S Hybrid. That one utilised a 1.7 kWh nickel metal hydride battery system hooked to a 47 bhp electric motor. Matched to a 3.0-liter supercharged V6 engine, it whipped out 380 bhp and 440 Nm. 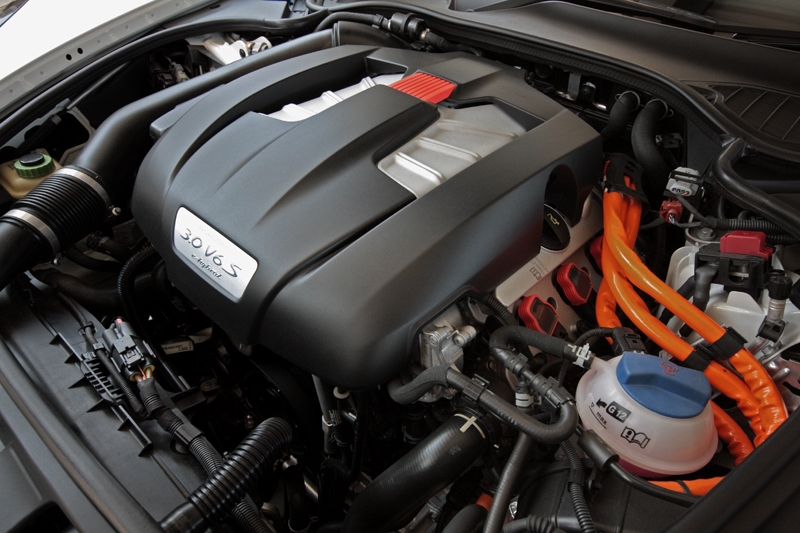 Now, they’ve given their hybrid system an improvement and gone one up. The — take a deep breath - Panamera S e-hybrid is a plug-in hybrid luxury sedan that has (a) a water-cooled 9.4 kWh lithium-ion battery pack that can be charged via charging stations or by the engine while on the move, (b) a 95 bhp electric motor and (c) an electric boost function. 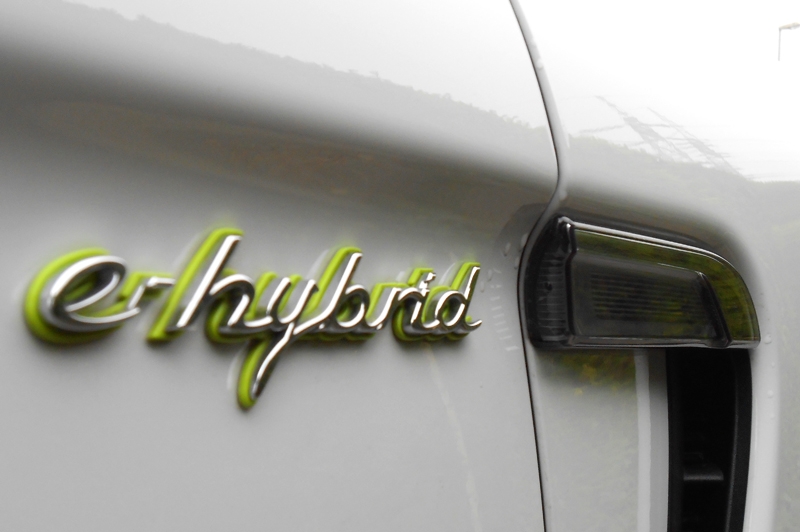 With a supercharged 333 bhp 3.0-liter V6 powerplant paired to an 8-speed Tiptronic ‘box at the forefront, the Panamera e-hybrid whips out 416 bhp and a whooping 590 Nm of torque in total - all that to the two rear wheels (I know what you’re thinking). 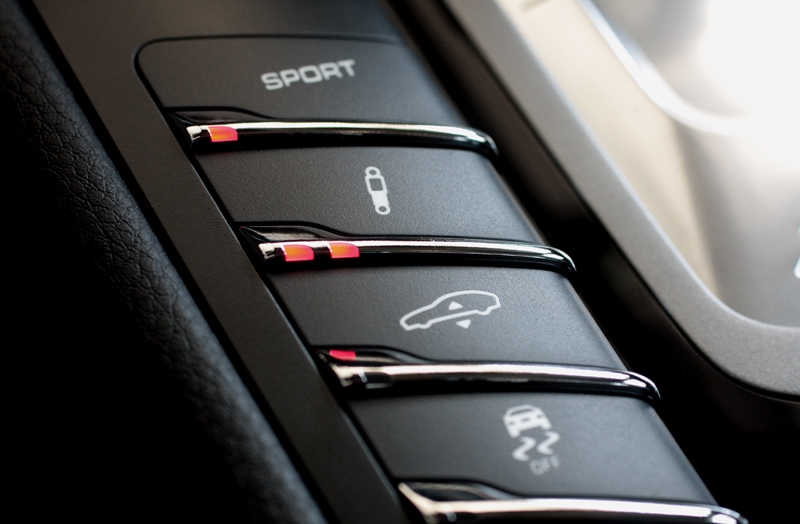 Other important figures include a 0-100 km/h timing of 5.5 seconds and a top speed of 270 km/h. And best of all, its C02 emissions is only 71 g/km, giving it a CEVS rebate of $20,000; it may not sound much, but hey, better than having to fork out that much money which could be used instead for a holiday. Or shopping. Or even a set of forged alloys. Just saying… 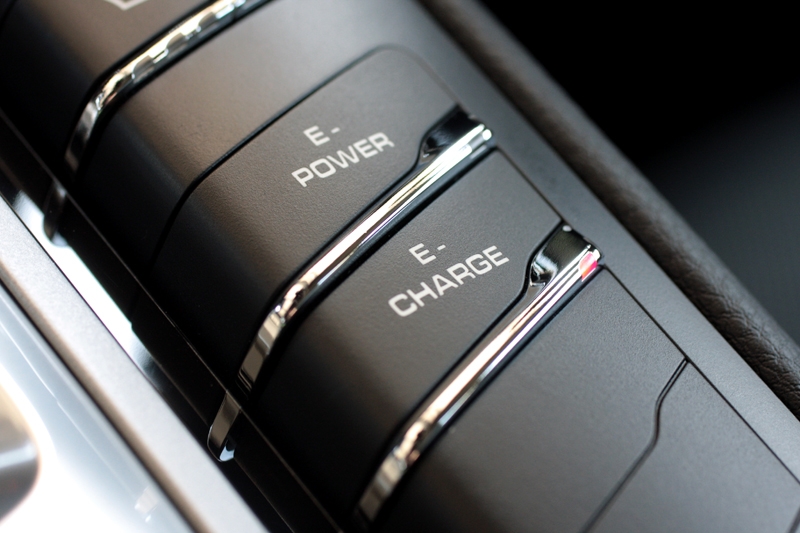 All those numbers aside, the Panamera S e-hybrid is one car that lets you have the best of both worlds. It can go all electric when you want it to or just drive like any ordinary petrol-engined luxury sedan. 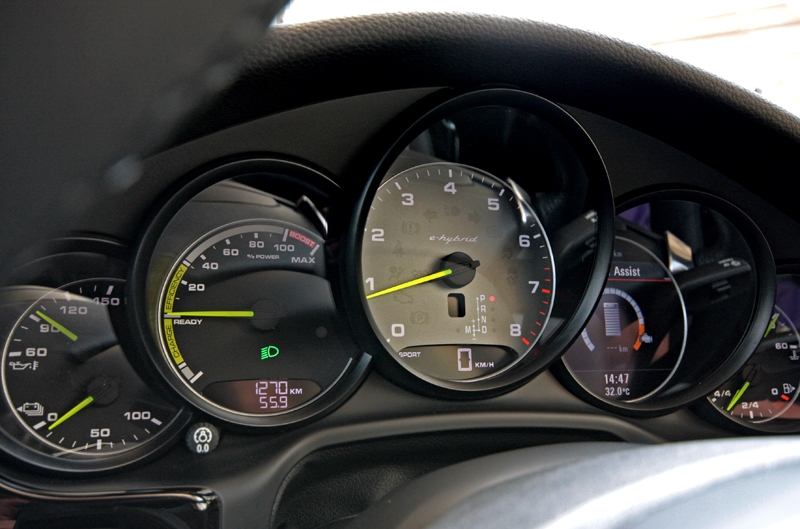 When you switch on the ignition, all you get is an eerily quiet cabin, as though the engine is still asleep. The only indication you get this car is indeed alive and kicking is by looking at the instrument binnacle and seeing the needle pointing to ‘Ready’. Shifting from P to D and gently accelerating, you are still in full electric mode — for once I have an idea how it feels like to be in a coffin. 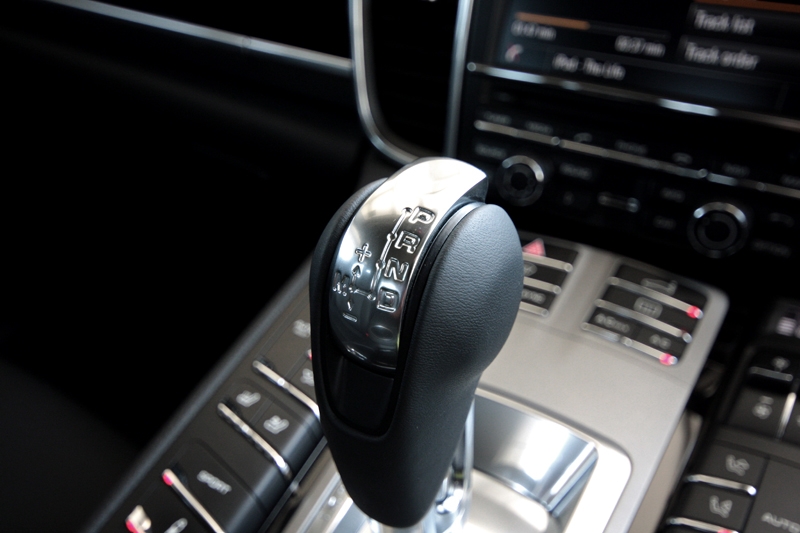 But once the battery runs out of juice, the hybrid motor will kick in; and I must say, I was very impressed as to how smoothly the transition was. All you could see was the tachometer jumping from above 0 to about 2,000 rpm while you cruise along the expressway at, say, 100 km/h. 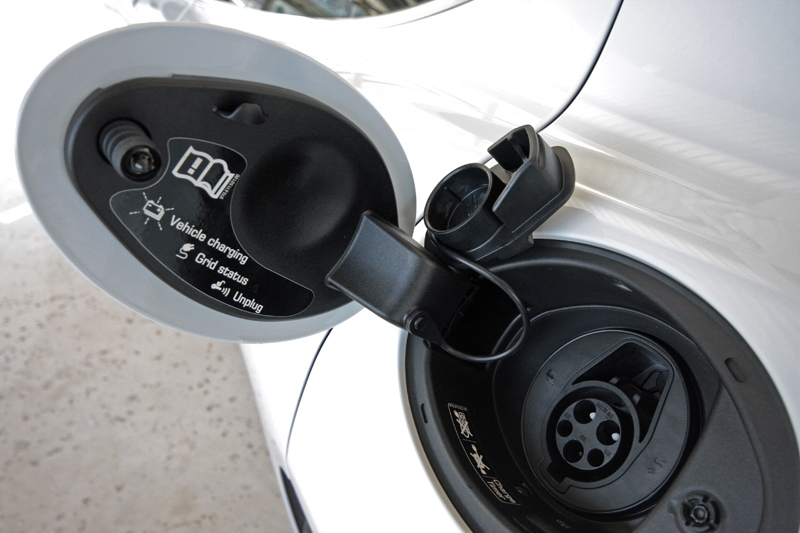 Despite the weight disadvantage (it’s more than 300 kg heavier than the base Panamera), outright performance doesn’t mar the e-hybrid. It’s still lively, you get a nice — almost subtle — engine note and it handles pretty well, although you can feel the weight moving around as you take corners hard or brake late. That said, the anchors work well and you do feel the regenerative braking system at work as you come to a complete halt. 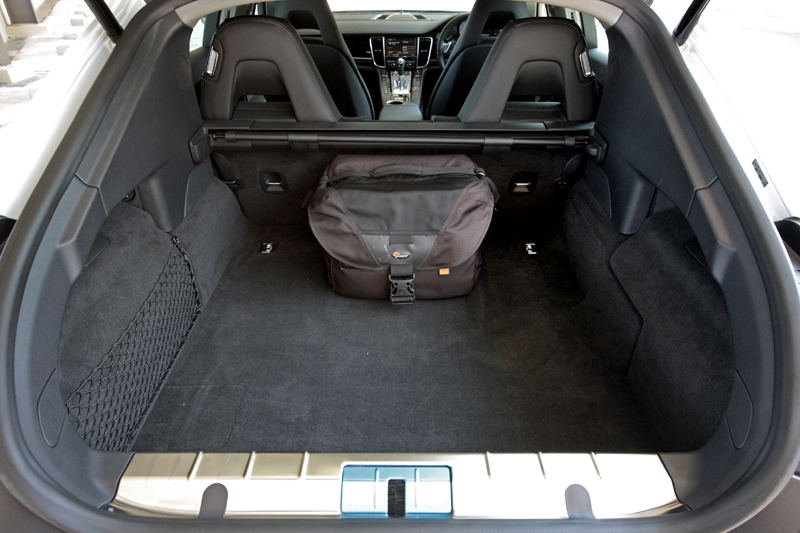 Besides the obvious weight moving around the car, the other little compromise is the boot space. As the rear houses the copper cables, electric motor and 129 kg lithium-ion battery pack, you lose about one third of space; that said, it ain’t that bad as it still remains useful enough for luggage bags for road trips. 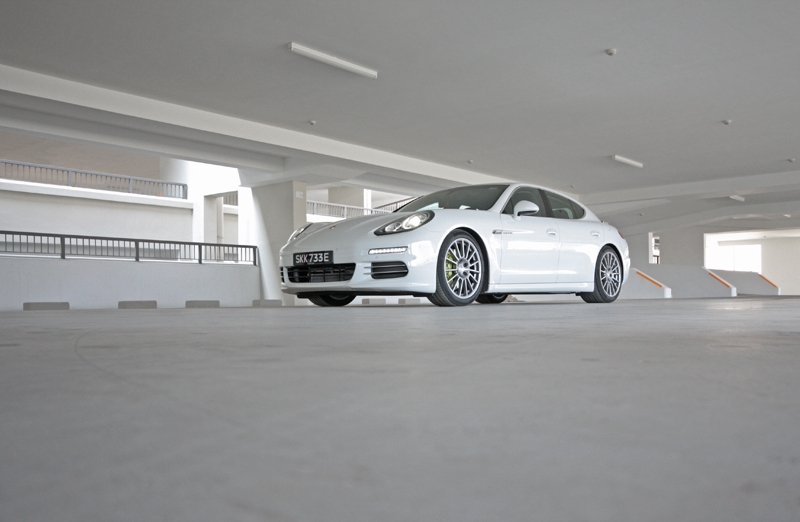 As a whole, the Panamera S e-hybrid still retains all the usual appeal of a luxury sedan despite losing some handling finesse. The extent Porsche has gone to make it smooth remains respectable too. 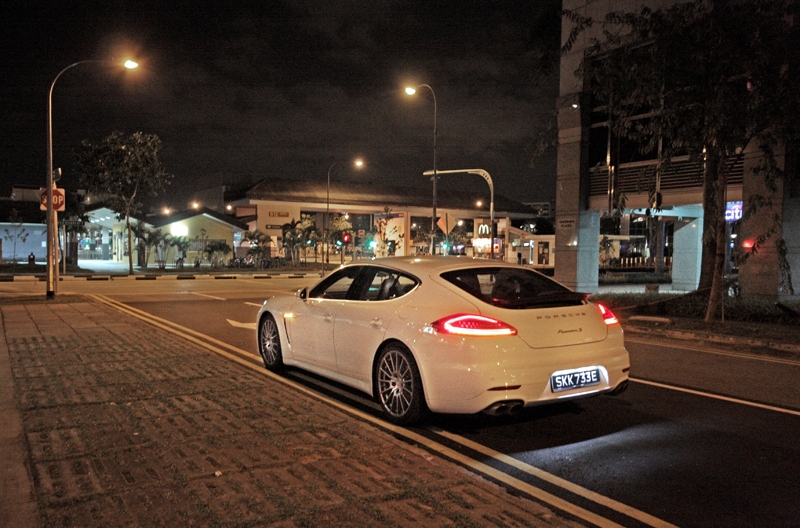 Realistically speaking however, the take up rate, we reckon, won’t be that significant among local buyers who are pretty much still comfortable with a ‘regular’ petrol-driven car. On top of that, charging stations are still lacking and nothing much is being done by the relevant authorities, to date. Thus it is still safe to say that only those few affluent ones who are willing to try a slightly different Porsche would take one home. 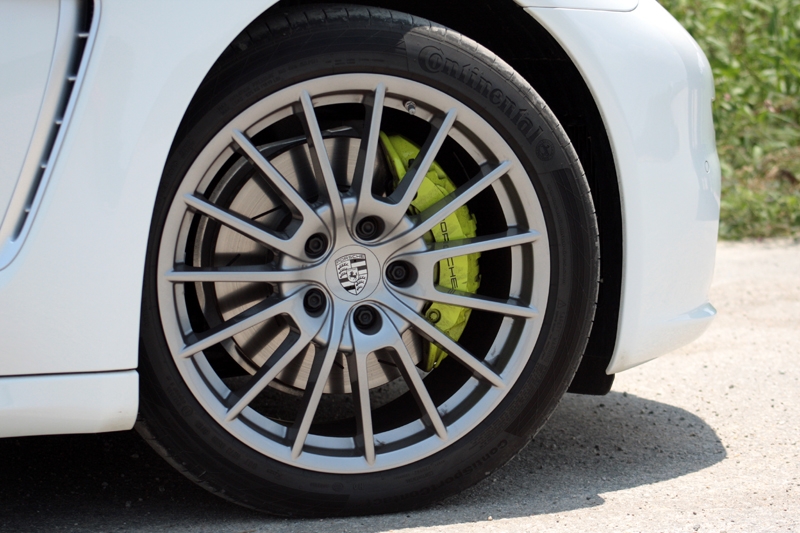 Plus, they must be able to live with those neon green, e-hybrid only bits throughout the car… 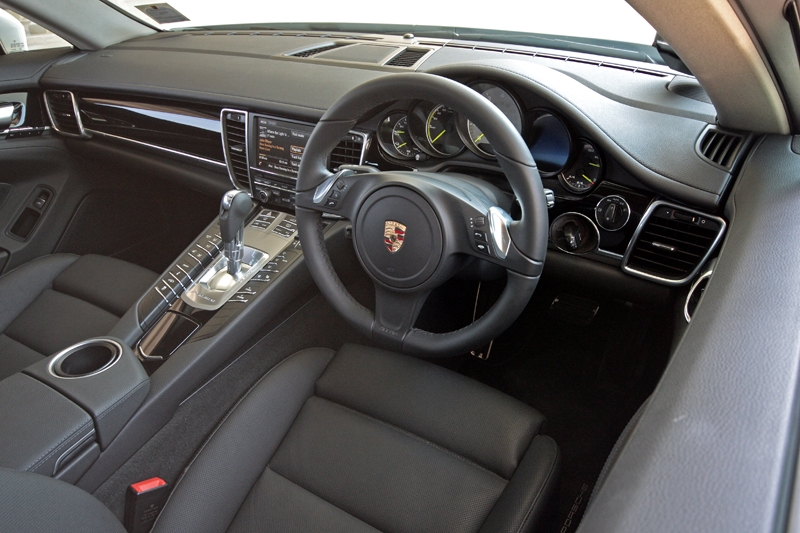 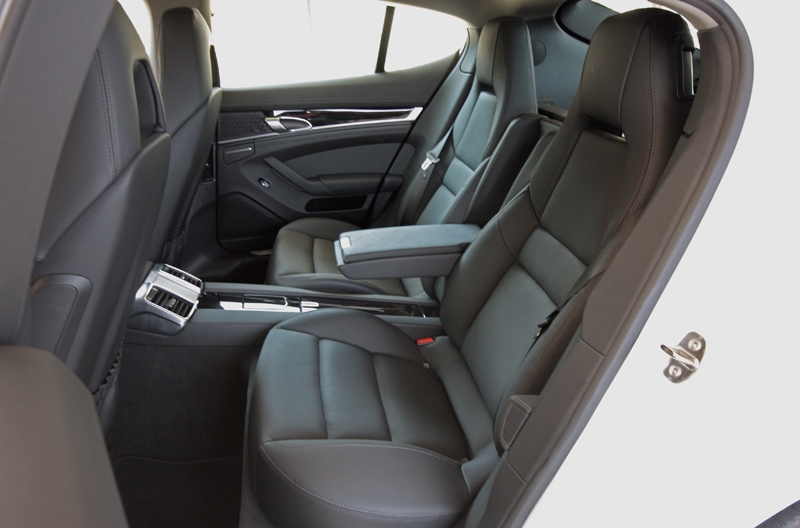