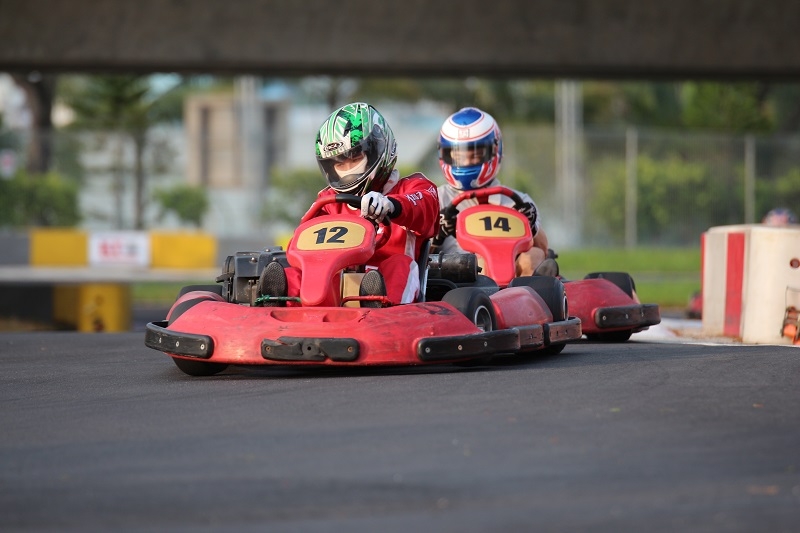 We all know you’re supposed to be gentle on a new car for its running-in period. But what about a new racetrack? Let Burnpavement be your guide to the KF1 Karting Circuit! (With onboard video below)

Spot the braking point. Slam on the anchors. Turn in - firmly but not too aggressively. Juuuuust touch the apex without going over the kerbs. Wait for the rear end to settle before smoothly getting on the throttle. Rinse and repeat for every corner over the next 15 laps. To anybody who’s gone on a trackday before, this thought process should seem pretty familiar. But throw in the low evening sun shining straight in your eyes, a completely unfamiliar track and seventeen other drivers with a similar hunger for speed, and you could get a sense of why that thought process might be a little hard to maintain consistently.

What I’m talking about, of course is kart racing. Not just any old kart race mind you, but one of the first races to be held at the new KF1 Karting Circuit. Yup, 72 crazy sods, including yours truly, had an opportunity to race on the new track a whole week before its grand opening! Call us pioneers, testers, guinea pigs, whatever; what better way to break in a new track than through the crucible of motorsport? 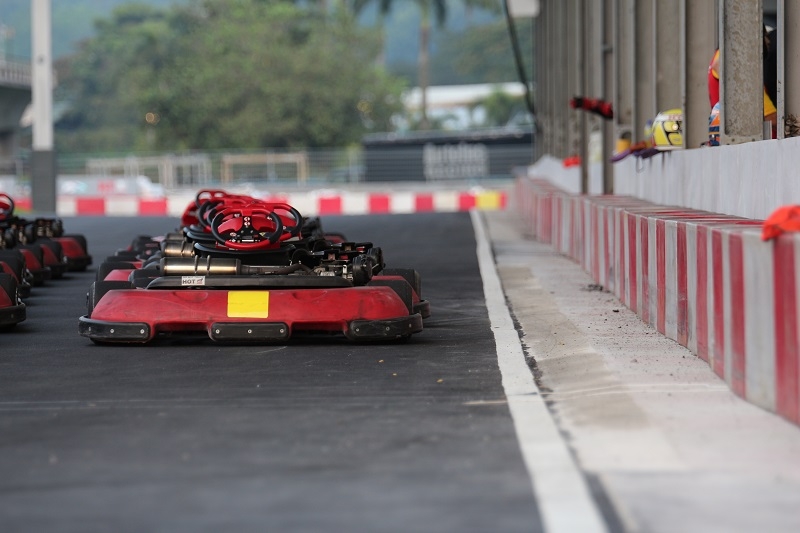 The KF1 circuit is unique in a few ways - chief of which is that it snakes its way underneath the MRT train tracks a total of six times per lap. The circuit is also designed to be able to be run in clockwise and counter-clockwise directions, and rather than using traditional tyre barriers, features plastic Tecpro barriers, which are less damaging to karts and can absorb crash impacts more safely (you can trust me on this one, I’ve *unintentionally* tested its effectiveness before). 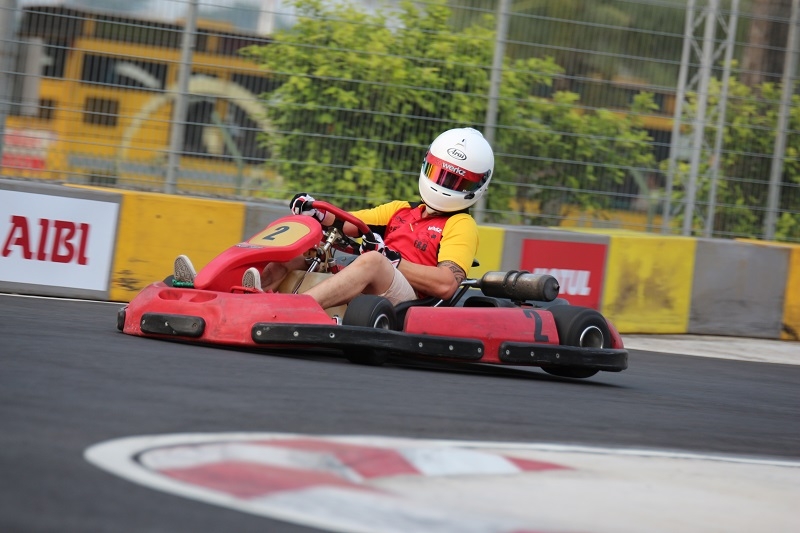 For this event, the track was run in the counter-clockwise direction, which, in my opinion, is a much more enjoyable layout to drive than clockwise. Why? Because it features several heavy braking zones that are preceded by long straights, which make for prime overtaking opportunities. Here’s Burnpavement’s exclusive guide to mastering this challenging track: 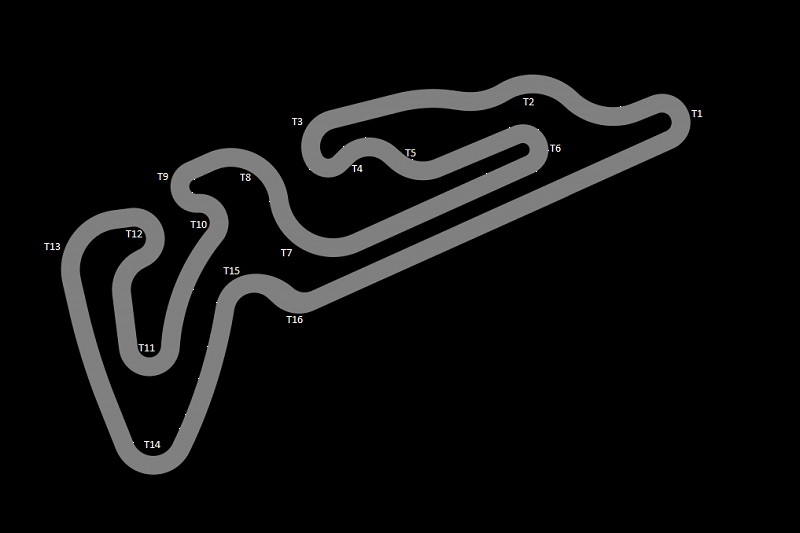 The 140m-long pit straight leads to a downhill braking zone into Turn 1. Watch for the kink in the line of barriers after the end of the pit building: this is your braking point. Scrub off as much speed as you can before turning in, but take care not to let the kart slide - you’ll want to preserve as much momentum as you can exiting the corner, as the run up the hill, down the short straight and into the hairpin at Turn 3 is the second-best overtaking opportunity on the track. Take care here though: the severely tightening exit caught many people out, so you’ll want to brake late and take a very late apex to avoid running over the exit kerb. 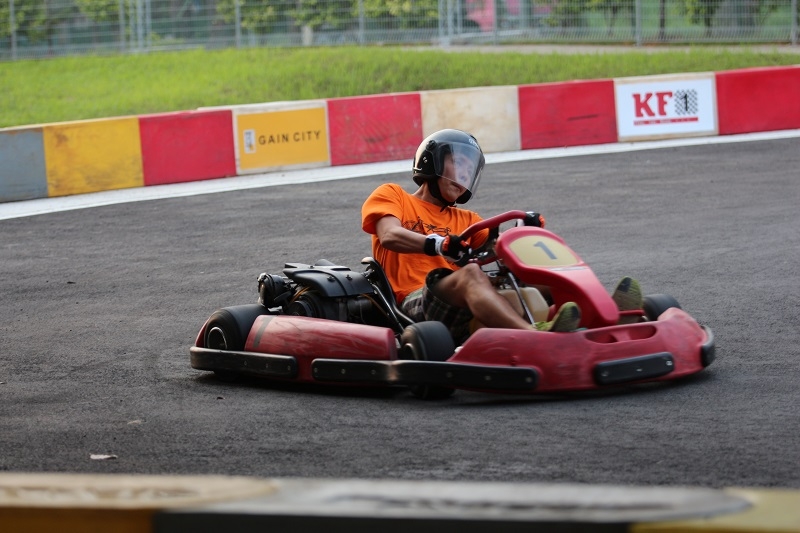 After the short run under the train tracks comes the Turn 6 hairpin. You may be tempted to put two wheels on the concrete to maximise track width, but don’t. Grip is sparse there and will likely cause you some oversteer. Instead keep all four wheels on the asphalt and let the kart run wide on the exit - there’s plenty of space and you’ll want to maximise your exit speed down the straight, past the kink and crest at Turn 7 (professional race karts can catch a bit of air here), and into the next braking zone. 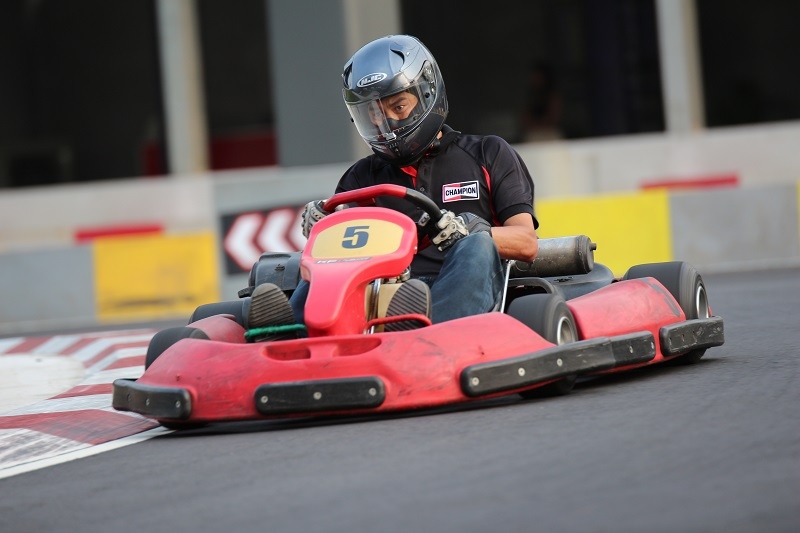 Like Turn 3, Turn 9 is a deceptively tricky corner. The exit tightens on you once again and it’s very easy to carry too much speed in and understeer wide. The braking point for this corner is very early - right at the apex of Turn 8’s left-handed kink. Let the kart run wide out to the barriers on the right and turn in early. If you’ve slowed down enough, the tyres will hook up nicely and you’ll be able to slingshot through the chicane under the train tracks. 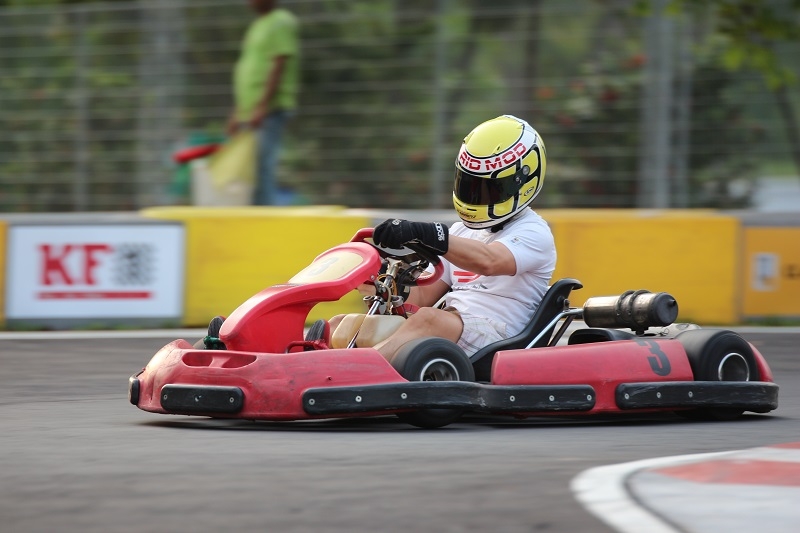 The corners for the latter half of the track are much faster and more open; and much more enjoyable if you can get a nice flow through them. Watch out for the tree and kerb on your left as you approach Turn 11: a crash here will be very nasty indeed! Give the brakes a quick dab as the kerb ends; beware also a rather nasty bump right as you turn in that can really unsettle the rear end. Plant the throttle early and take a wide exit before swinging to the right to set up for the next corner. Turns 12 and 13 are actually two very fast corners in one, and feature the most ferocious bumps on the circuit that can literally make the steering kick and buck in your hands. Maintain a steady throttle and hug the inside of Turn 12 to avoid the rough patch on the outside, and keep either to the inner half or all the way to the outside lane of 13 (pause the video at 0:59 and you’ll see a particularly unforgiving dark patch on the ground. You definitely want to avoid this). 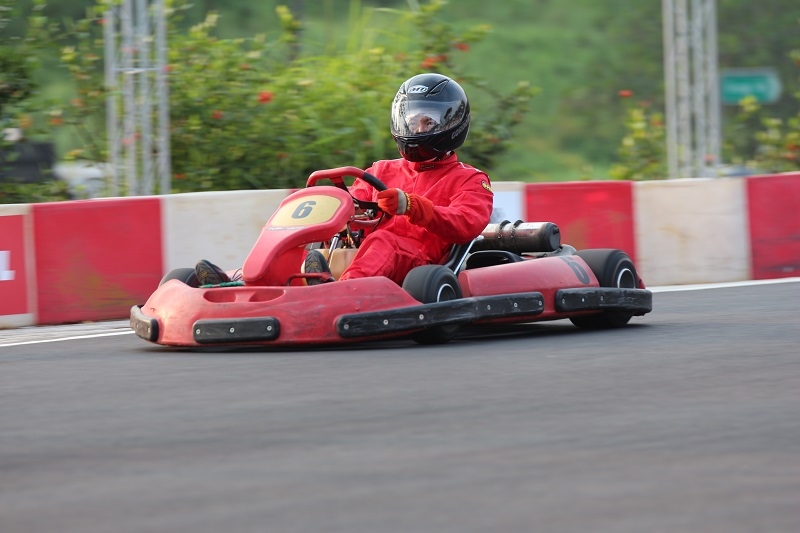 Nearing the end of the lap now and into the high-speed left-hander at Turn 14, or what I affectionately call Big Tree Bend. There’s no clear brake marker for this, but just give the brakes a quick dab and turn in smoothly as you can. It’s flat-out from here for the remainder of the lap so you want to avoid any oversteer. Finally, swing left on the approach to Turn 15 to open up the line and avoid the kerb on the left at Turn 16. Congratulations! You’ve completed a lap of the KF1 Karting Circuit! 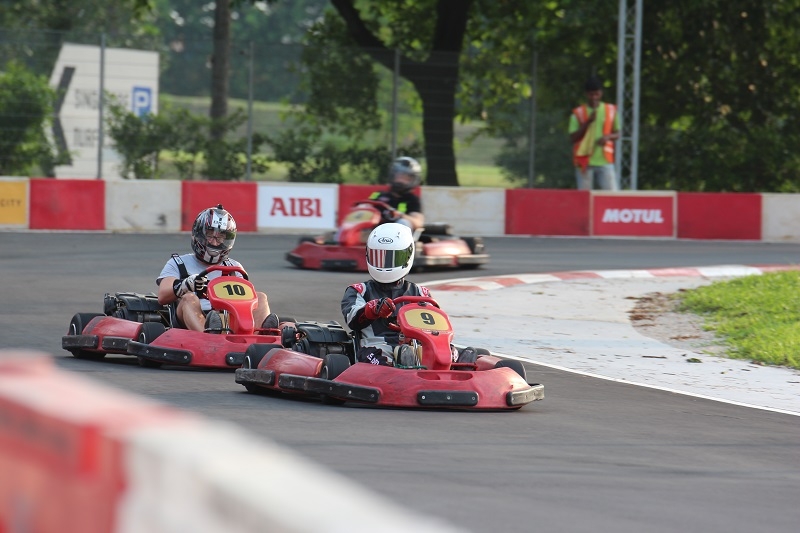 For the race itself I was fortunately able to make a quick getaway off the line (after qualifying in 2nd place) and luckier still not to get held up by back markers, just as the chasing pack caught up to me. This meant I was able to concentrate on perfecting my lines rather than worrying about having to defend from those behind. Things may not be so simple the next time though, because despite Singapore having almost no motorsport culture to speak of, there are many talented individuals out there just waiting to shine if given merely half a chance. With the opening of this new circuit, there’s hope that this chance will come along in the near future, and it can’t come soon enough. 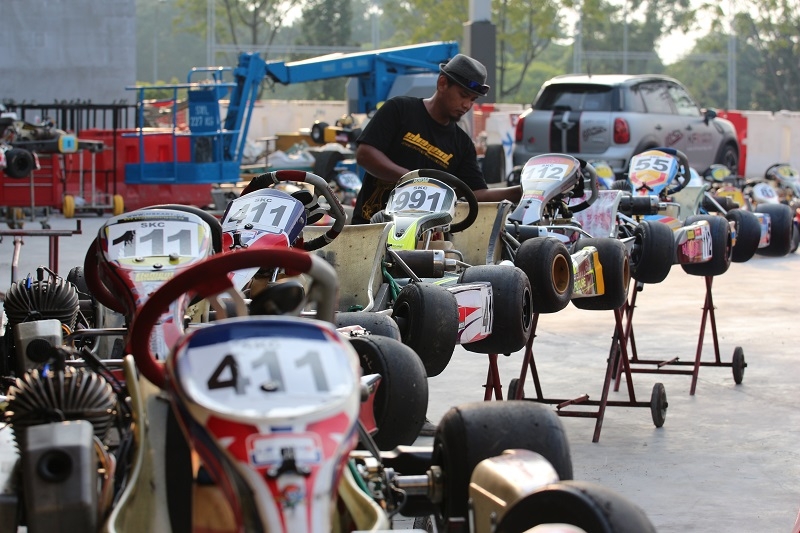 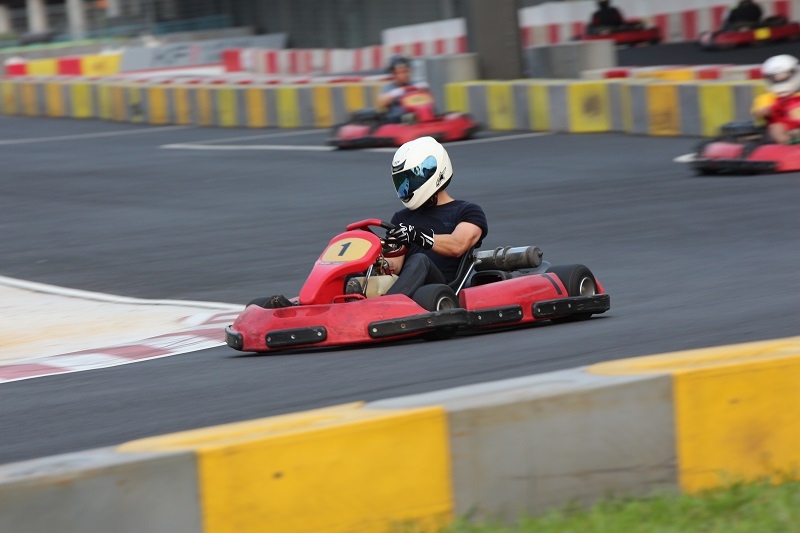 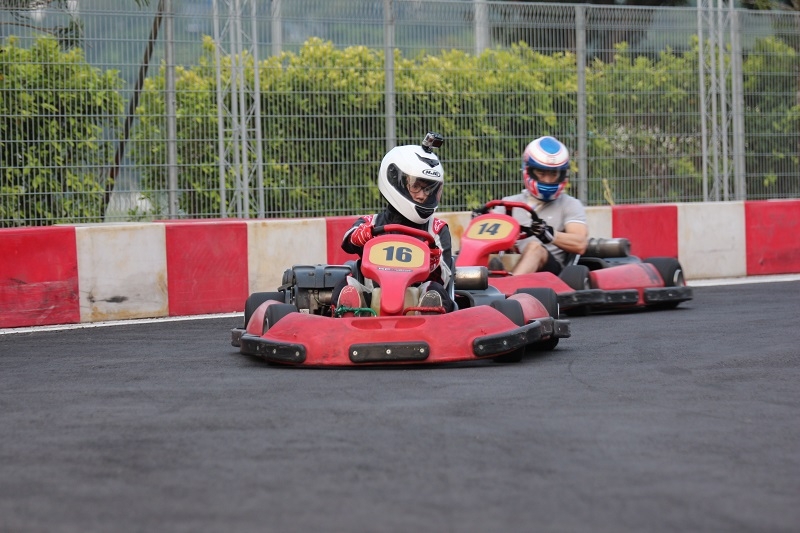 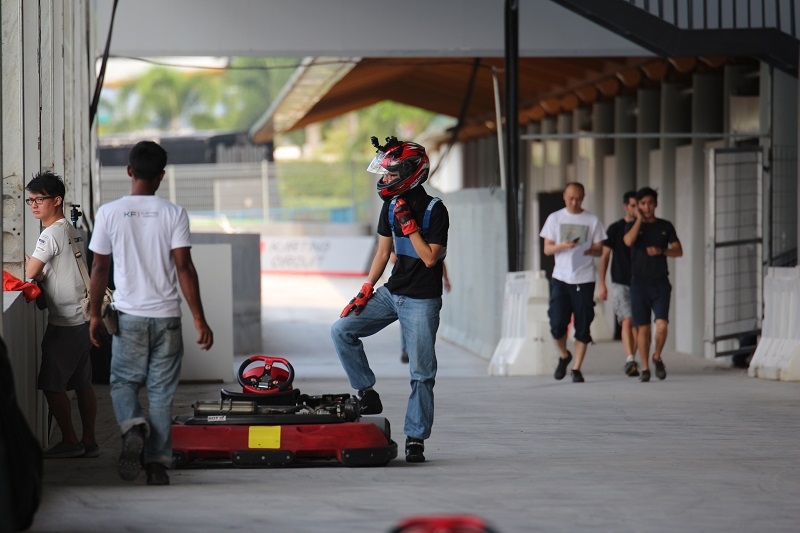