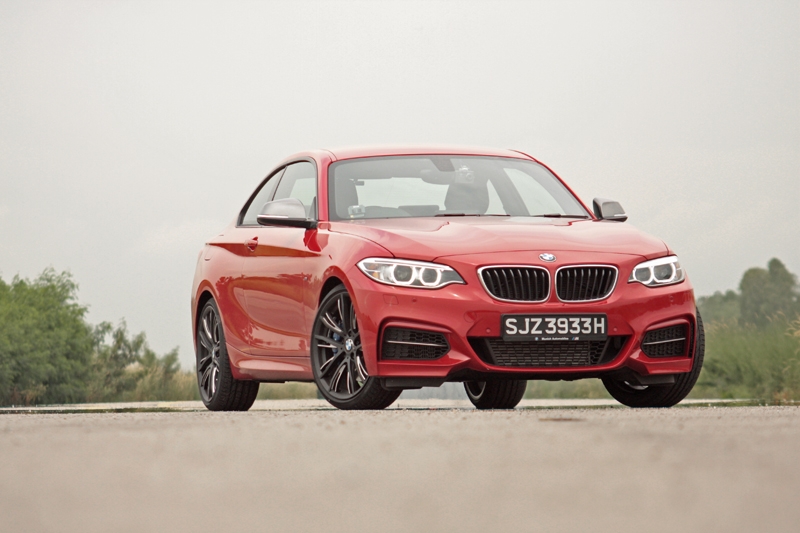 It is properly fast; Pizza Hut should perhaps invest in a fleet for super speedy delivery service

It has a rather compact body (FYI, it is no bigger than a Golf R, CLA45 AMG or S3 sedan), sports-tuned suspension set-up and here is the most important bit: a turbocharged 3.0-litre, 6-cylinder engine. This is the M235i.

Yes, you read that right. M's engineers have fitted BMW’s highly utilized N55 engine into this compact coupe; the same engine that is powering the 3, 4, 5 Series, X3, X5 and X6. In here. Like in the M135i. 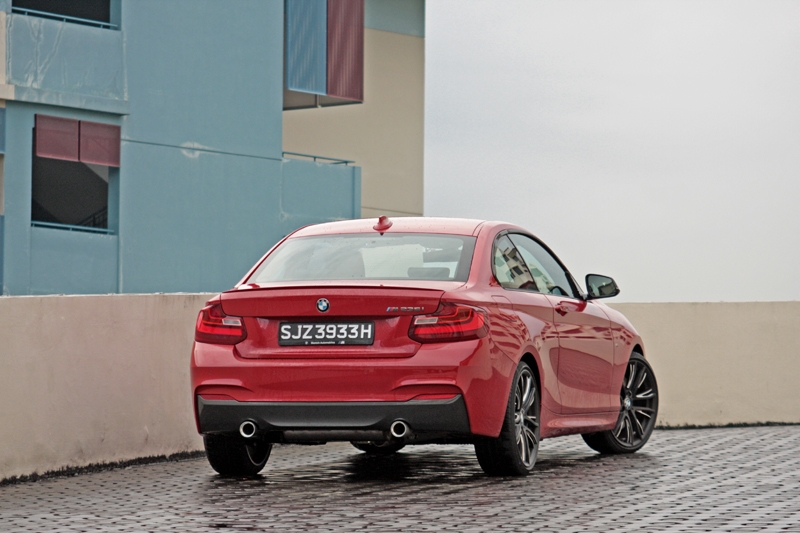 On the other hand, you might opine it will not be that far off - in terms of performance - than the hyper 1 Series, and it is just another segment filler for BMW. Let me correct you there, Sir: the M235i is longer, wider and stands lower. Which means you should expect some differences in overall performance. 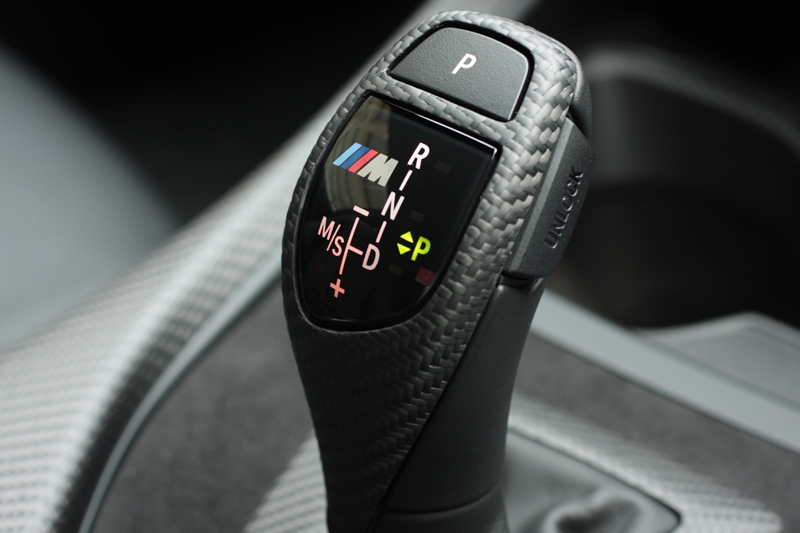 Mated to the ZF-sourced 8-speed automatic (no 6-speed manual option unfortunately), power output is rated at 326 bhp (6 bhp more than the M135i) while maximum torque is some 450 Nm ready from as low as 1,300 rpm. With all that power going to the rear two wheels, it takes only 4.8 seconds to get you to 100 km/h. 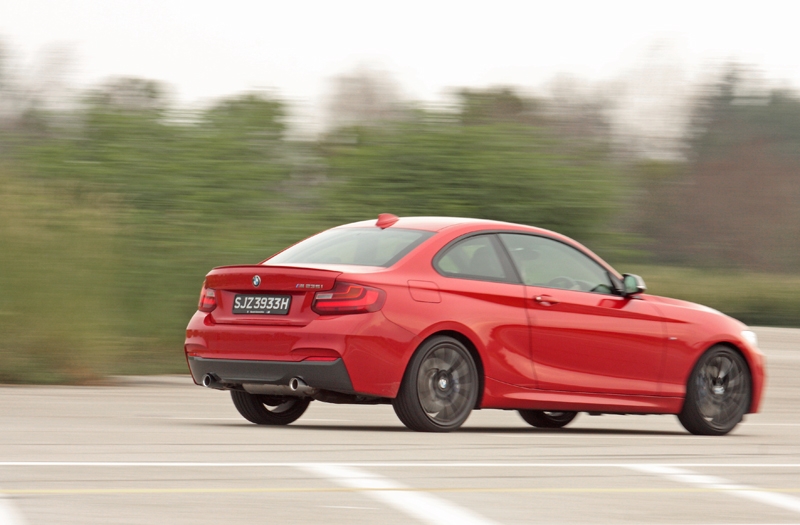 And the M235i is viciously fast; it feels every single bit as those numbers quoted by BMW. Weld your right foot down and it lifts off, leaving everything else waaaaay behind. Well you can be ballsy by switching off the traction control fully too; downside to this habit is you have to marry the daughter of a tyre shop owner soon… 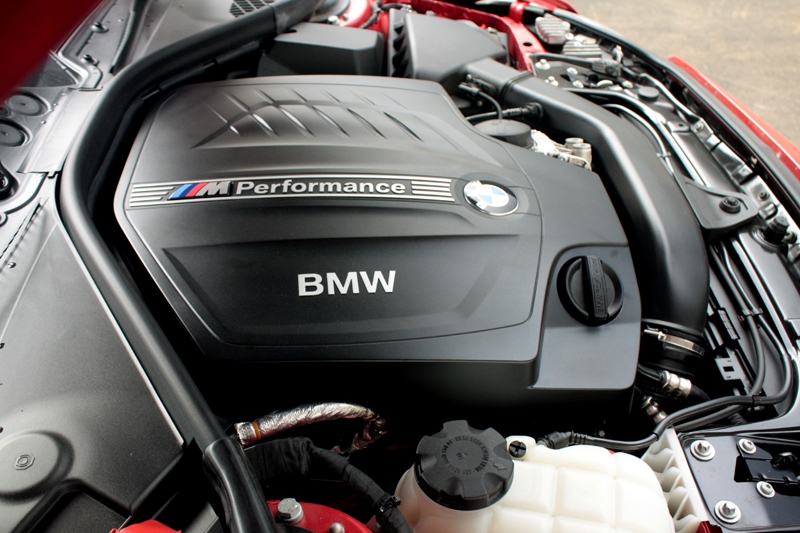 The engine is one hard worker, I’ll give you that. Besides being responsive to every accelerator’s feed (just stick to ‘Sport’ mode, don’t bother about the rest), it does let out a rather nice melody, best enjoyed with the radio and air-con switched off, the windows down. 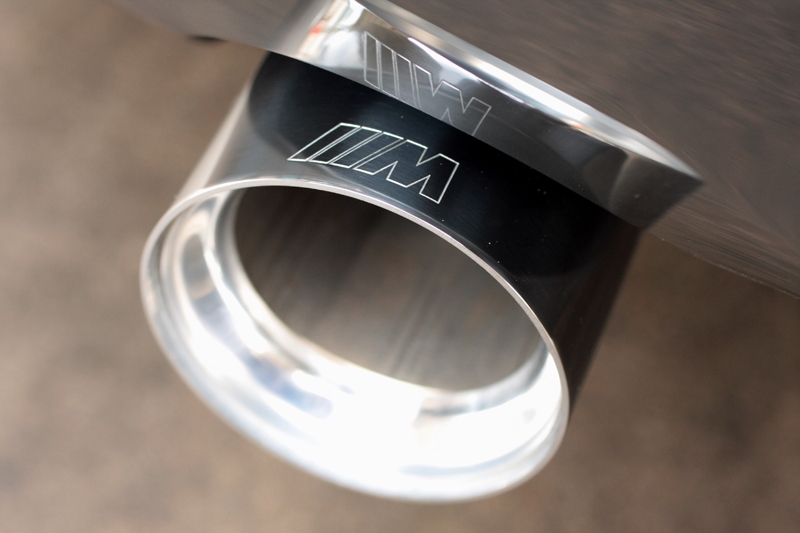 And with the M Performance exhaust fitted to this test car, driving the M235i feels extra, extra sensational; hearing all that “baaarp!” and throaty roar in second, third and fourth in the CTE puts a wide smile on my face. I must confess, the few days I had the car, that was exactly how I wake - and keep myself awake - up (even before the daily Americano with extra shots). 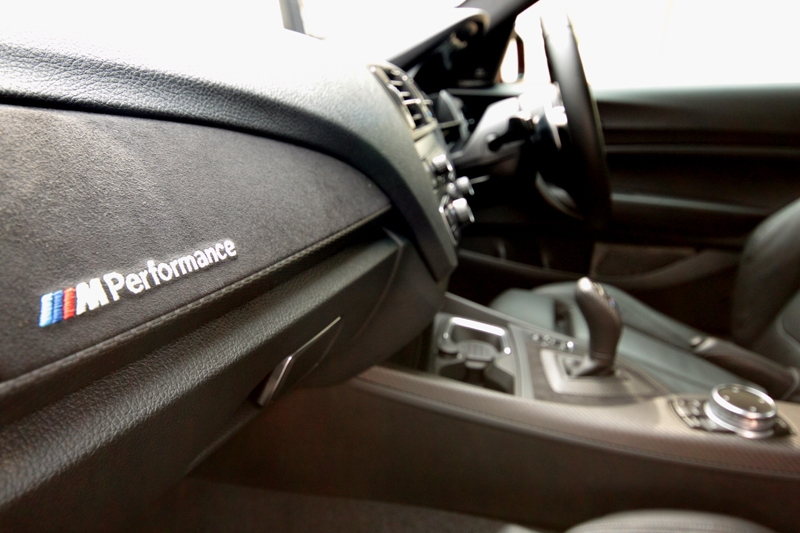 (The same cannot be said while in the KPE though: remaining within the 80km/h limit was quite the challenge. On a more personal note, it is the second hardest thing to do besides being shown a pizza buffet…) 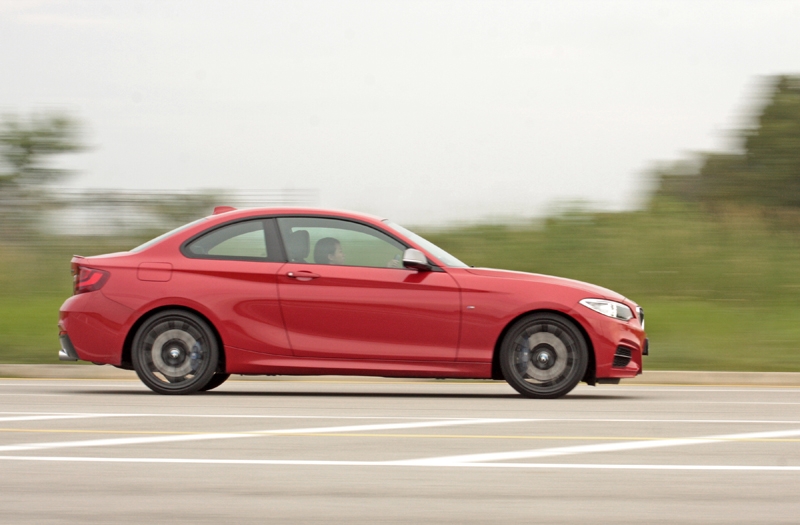 Handling wise, there is no surprise that the M235i possesses an exceptionally high level of grip — even more than the slightly tweaked M135i I reviewed before. You could feel the traction control holding the car together as you attack tightening corners (read: Tampines Avenue 5 into PIE, Xilin Avenue into ECP, Bedok South Avenue 1 into ECP), and that adds an extra sense of confidence; this is complimented further by the positive and meaty steering even nearing the limits. And oh, credit should also be given to the low-profile 225/30 R-19 front and 245/30 R-19 rear Pirelli P Zero rubbers fitted. 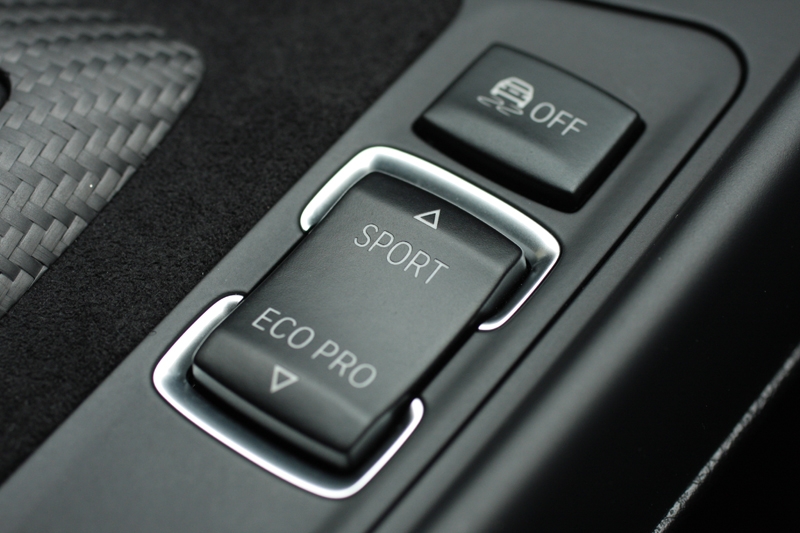 But if you do feel like wanting to take things at a slower pace, Comfort mode changes the handling character rather quickly. The steering gets less weight, the suspension turns softer and the exhaust note goes two levels down; good enough for date nights. 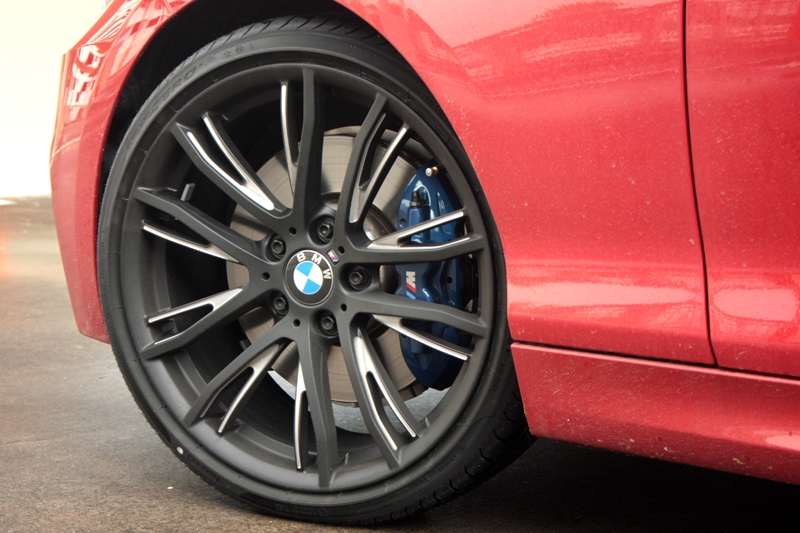 In any mode, the M235i’s anchors remain composed when shedding speed. At low speed however, it does feel unnecessarily bitey and you need some getting used to; give too much pressure at city speeds and you might offend your passengers… 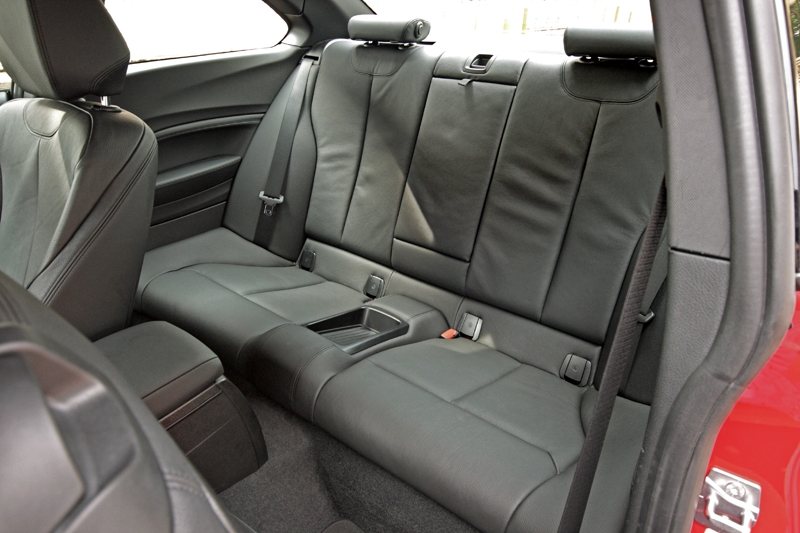 Speaking of passengers, the rear bench can accommodate two average-sized adults comfortably with more than enough head and legroom; in fact, you get more headroom in here than in a CLA. BMW is very specific in making sure only two are seated at the back at anytime: they placed a storage tray in between. Which is also a good excuse to not carry extra people in the car (“Sorry Jon, you have to take the cab cos Emily, Lina and Geri are getting a lift from me…”). 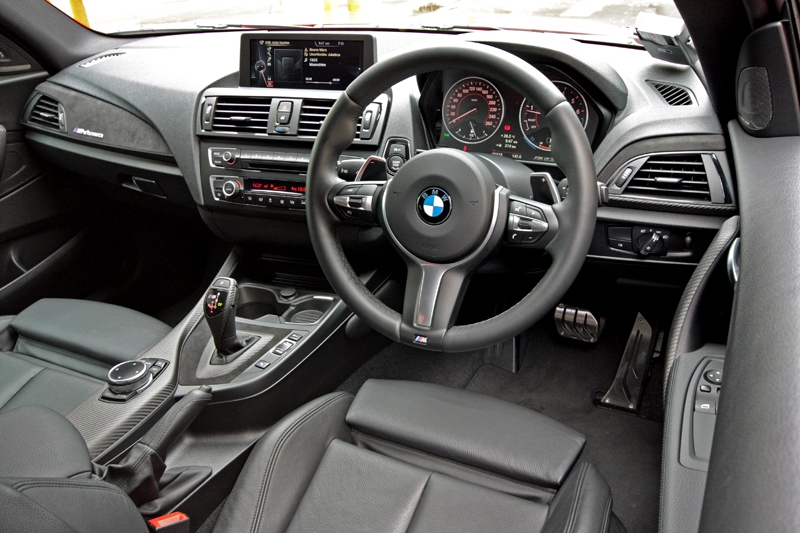 The M235i’s cockpit is clearly laid out, with a perfectly sized 3-spoke steering wheel (paddle-shifters are standard). Sport seats for driver and front passenger are also factory-fitted items, but the carbon-fibre and Alcantara bits are cost options. 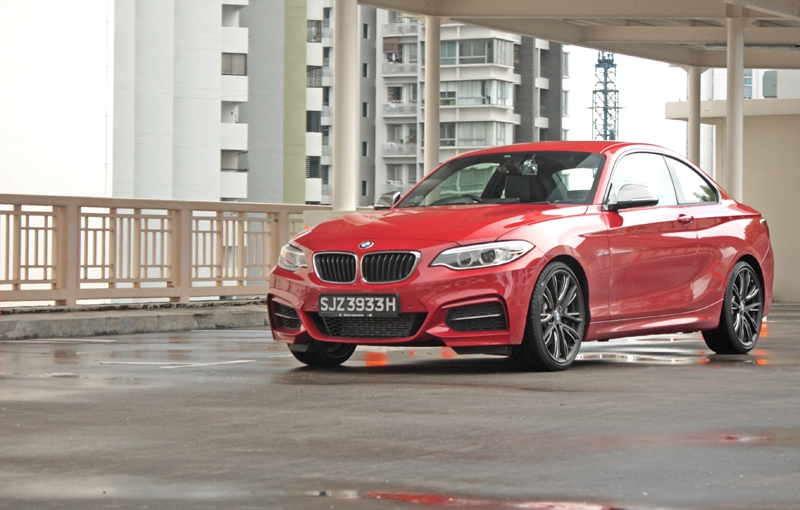 As a high-performance car, the M235i is definitely an enticing proposition. It has all the power, the handling capability, and with the optional M Performance exhaust and 19-inch wheels, gives the car an edge compared to the more clinical competitors, namely the S3 Sedan and CLA45 AMG. The asking price of less than $215k (with COE), should help you make a sound - no pun intended - decision. 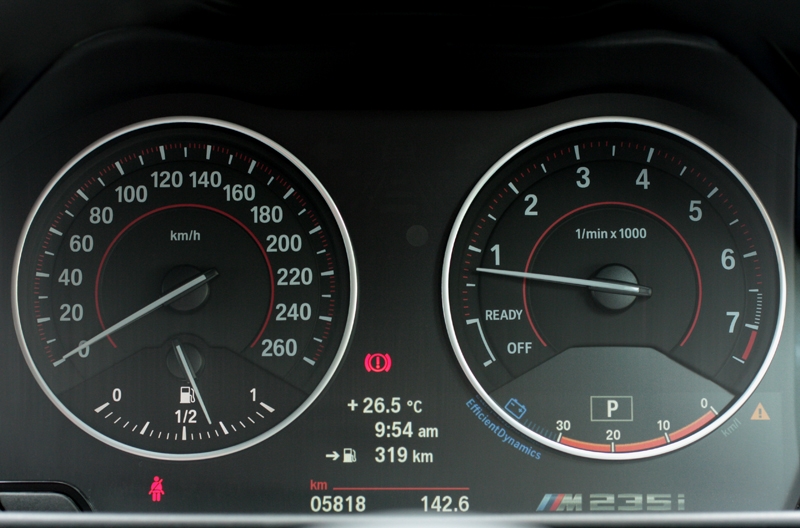 However, let’s get one thing straight: the M235i is not a replacement for the 1M Coupe. If you were to ask me, I would still park my money with a used 1M Coupe simply because (a) it has one of the best manual transmission, (b) there is more driving character to the car, (c) more exciting to tame and (d) that aggressive exterior. And I would definitely slap on a set of M Performance exhaust as well… 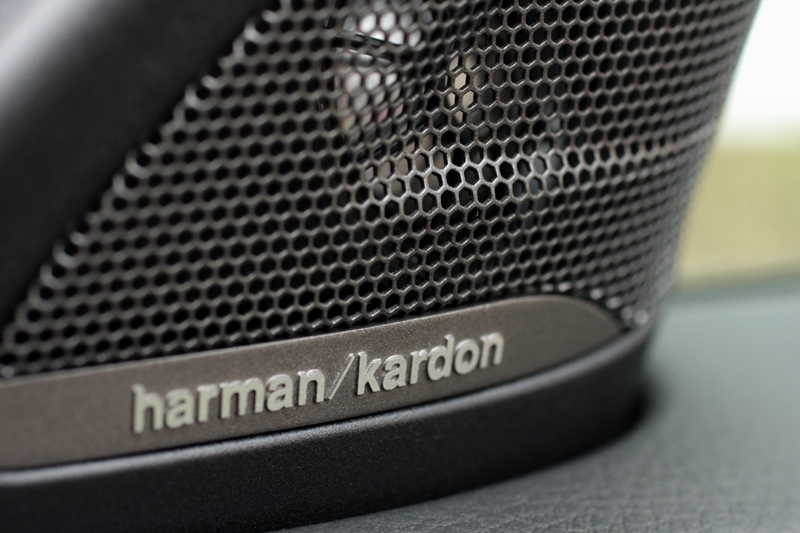