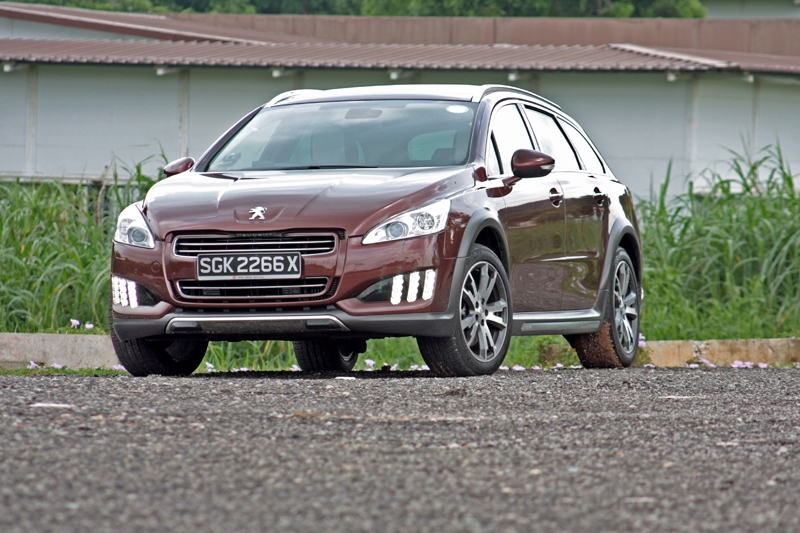 Peugeot is aggressively introducing diesel-powered models, and to up the ante, they have a hybrid-diesel wagon available now — yay, or nay?

We all know the hybrid and diesel models that are currently available in our local market. In fact, some may even know it by hard. And then suddenly, Peugeot came along - quietly - with a mind-blowing concept: a hybrid diesel. Ok, so it may not be a new new concept, but for Singaporean buyers, this is a whole new level of fuel-saving solution. Diesel: economical. Hybrid: very economical. Diesel plus hybrid: sounds economical, x 2. Keboom, mind blown. Add to the fact that Peugeot assures the 508 RXH can run on Malaysian diesel, and suddenly you get the urge to run down to the showroom with your cheque book to get one…

Thing is, this Peugeot 508 RXH sounds like the best solution for the majority of drivers who want a car that does not require too much refueling; Peugeot claims a combined cycle of 24 km/L. 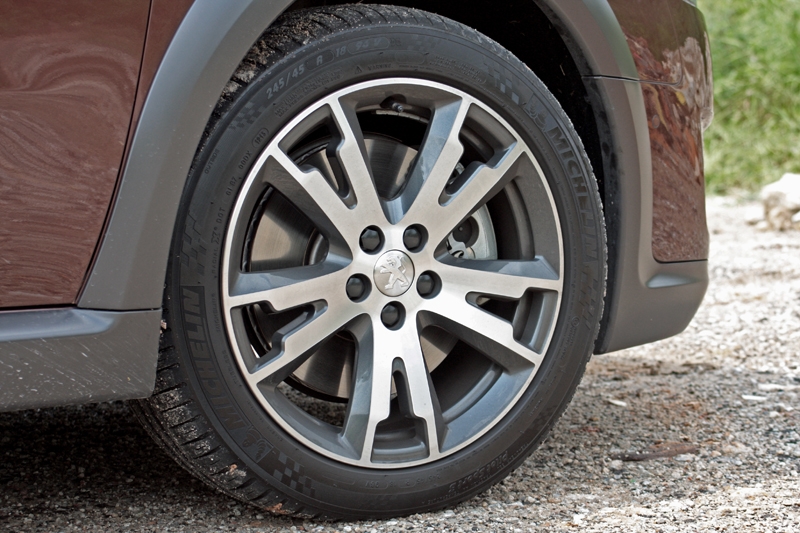 As the name suggests, the 508 RXH basically shares the similar chassis and bodyshell as the 508 Wagon, except in this guise, Peugeot has raised the suspension and added body addenda to give it that rugged/sporty themed exterior. 18-inch alloys, wrapped in 245/45 R-18 Michelin Pilot Sport 3 rubbers come standard, along with those roof-rails. Hmm… Somewhat, the 508 RXH reminds yours truly of the Audi A6 Allroad quattro, Volvo XC70 CrossCountry and Subaru Legacy Outback. 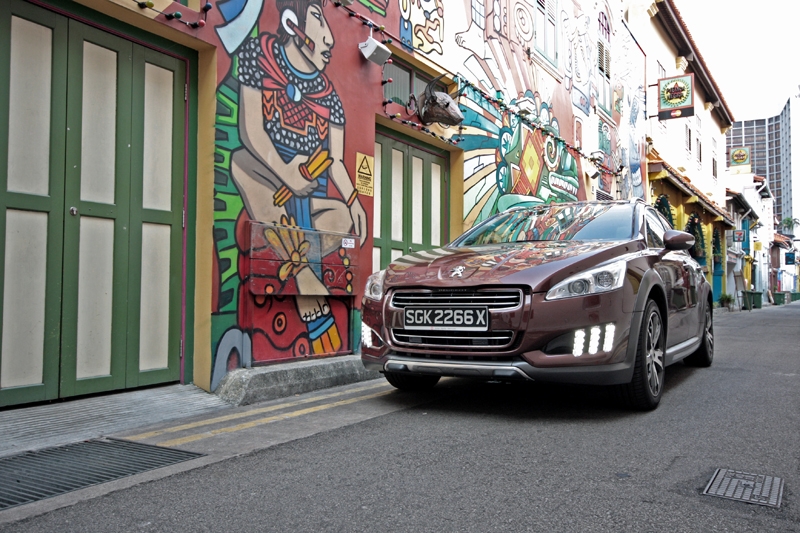 Of course, the 508 RXH looks very handsome as a whole, and it is the highly detailed face that needs special mention. There is nothing to fault: the grill matches the headlamps, the bulging bonnet giving off a muscular stance and check out those LED daytime running light mimicking a set of claws. Typical French attention to details, that’s for sure. 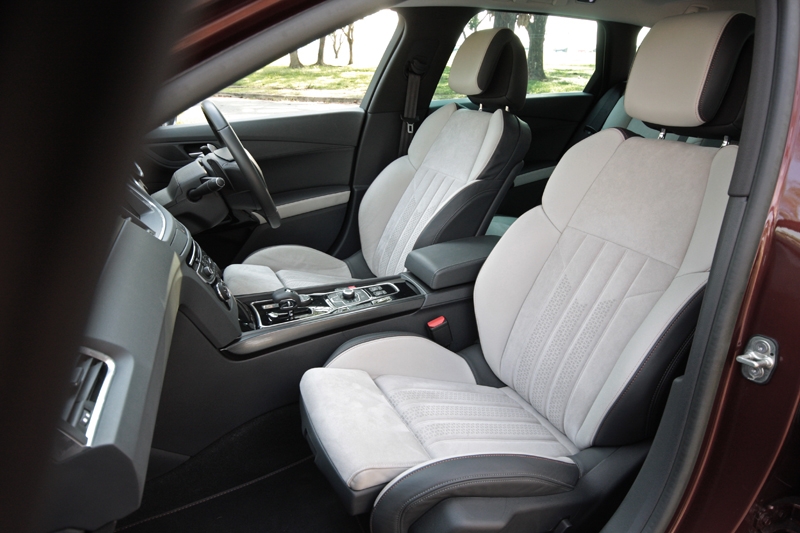 Inside, the 508 RXH deserves to be nominated for the “car with lots of accessories” award. Overall built quality is, pretty much, faultless and can even give BMW a good run for their money. Ok, so it can be a little intimidating in the beginning, considering the amount of buttons and controls surrounding you; even the steering wheel has enough buttons for you to run a country with. Both driver and front passenger gets ventilated seats, with the driver’s getting additional massage function — brilliant when you are stuck in peak hour traffic and. Need. To. Relax. Those. Tense. Muscles. 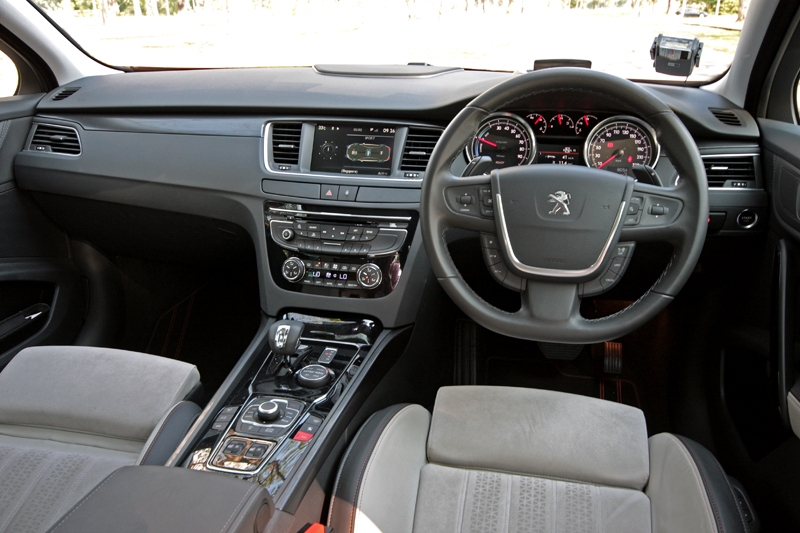 Other goodies include headlight that automatically switches to high beam as you drive along dark stretches of road which then dips when sensors detect vehicles approaching from the opposite direction. Fearing the worst for hopeless Singaporean drivers who cannot parallel park, Peugeot also added the Peugeot Parking Assist, sensors located at the front bumper to measure the size of a parking space and then indicate whether the 508 RXH can fit into it. Brilliant stuff, but if only it could self-park as well… 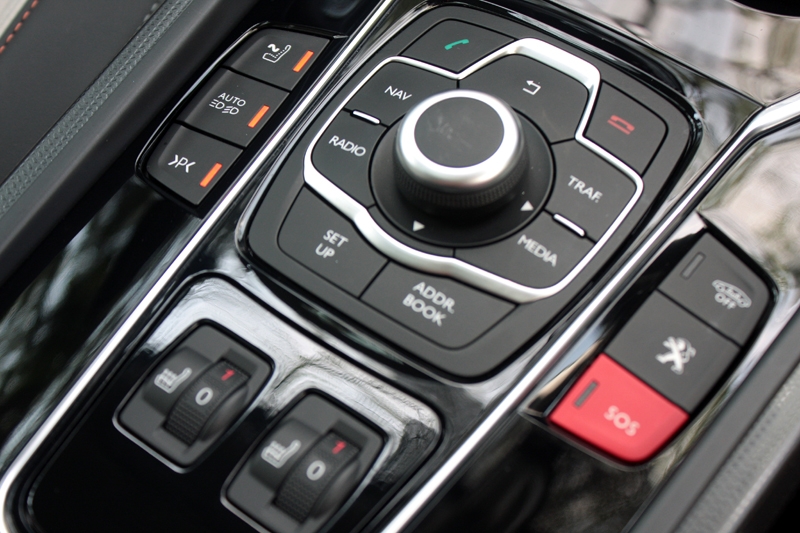 Oh and before I forget, the 508 RXH also comes with an emergency SOS button; in case you require assistance due to a break down or accident, simply press it and emergency and assistant services will be dispatched. However please note that quarrels with significant others do not give you the right to press this button. 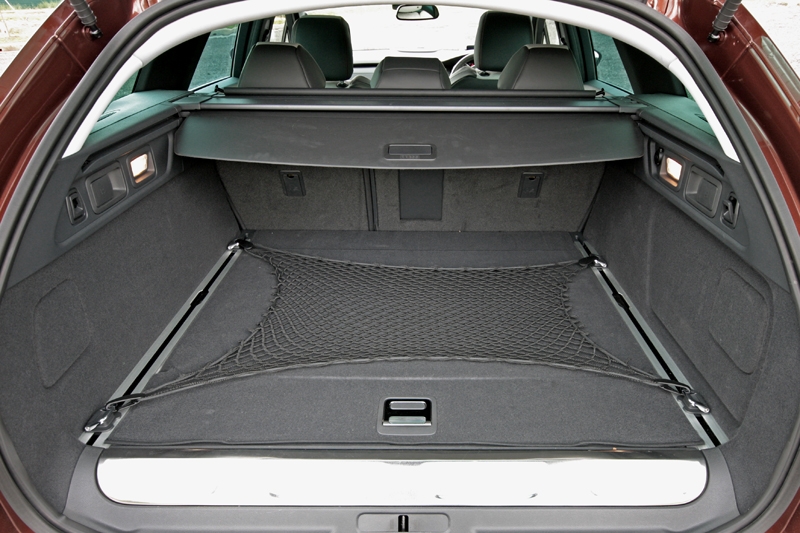 Open the motorized tailgate and you would surely notice the slightly compromised boot space. Due to the placement of the electric motor back there, you do lose 1/5 of the space. That aside, with the rear seat up and parcel shelf in place, you get a useful 423-litres worth; remove both and suddenly you can fit the whole of Bedok… 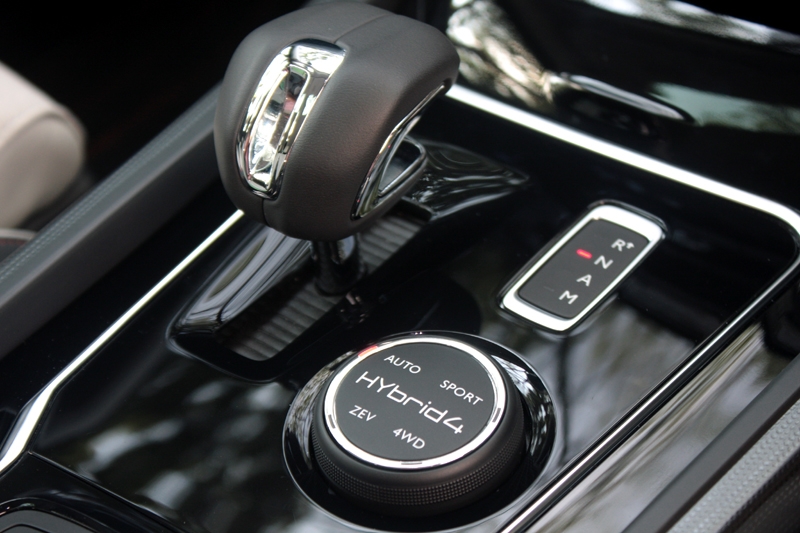 A lot of engineering obviously went into this car; you get a knob to select between four different driving modes. There is ZEV mode, where the 508 RXH travels in full electric mode for up to 3.2 kilometers before the diesel engine kicks in and also recharges the electric motor (it uses regenerative braking to recharge too). Then when you want to engage in some sporty driving, there is the Sport mode that holds the forward gears longer and allows the engine to rev even higher. 4WD mode, on the other hand, lets you go slightly off the beaten path; what is interesting is how the front two wheels gets power from the diesel engine, while the pair behind gets it from the electric motor. 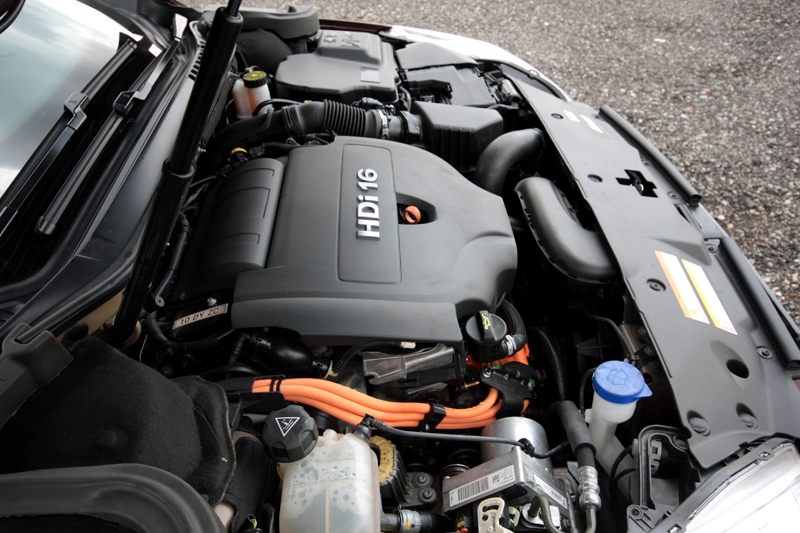 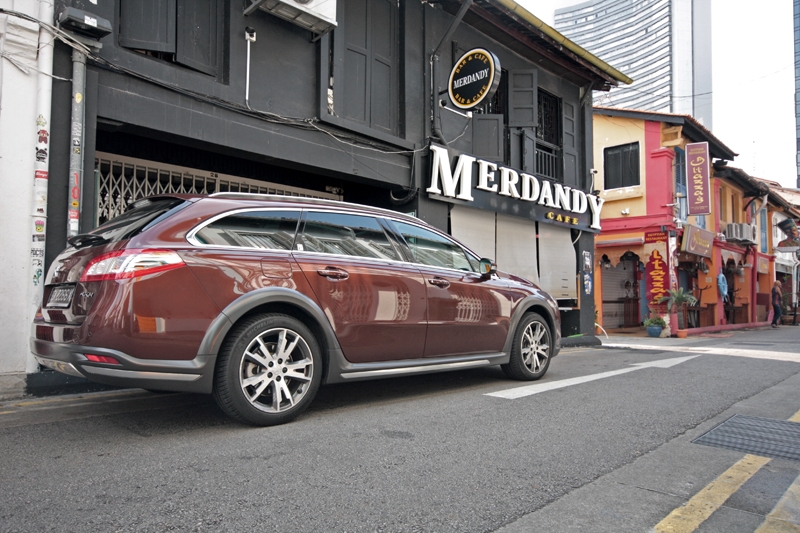 Well, that is on paper. Factor in the almost 2-tonne kerb weight and you should be able to realize why it takes 9.5 seconds to get from standstill to 100km/h. Realistically speaking though, the 508 RXH feels brisk when moving off traffic light junctions; it won’t do the job as rapid as an A4 Avant (2.0 TFSI quattro), but it is not as breathless as you would expect as well. I took the car up for a day-trip to Melaka, and I must say it does the job of chomping mileage at high speeds rather respectably — notably, while it seems flat higher up the power band, the sweet spot lies within the mid-range. 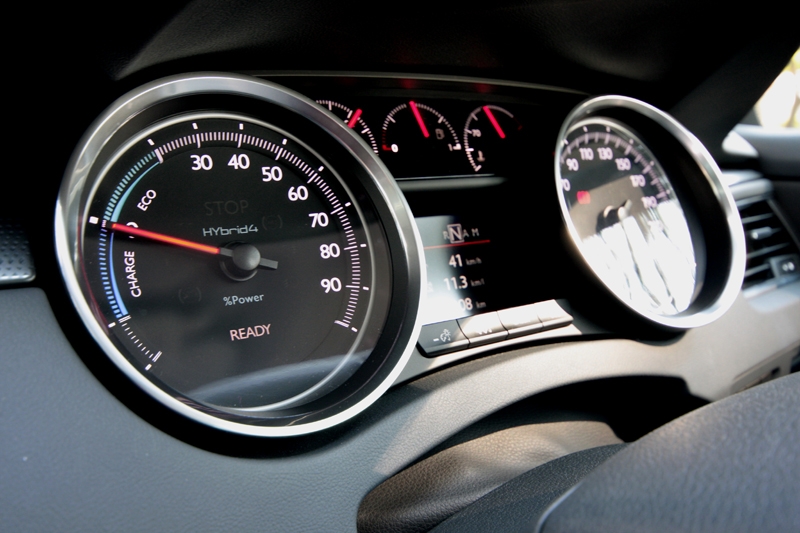 The transmission, however, is the car’s weakest link. You need some getting used to at the way it changes — a tad jerky, really — and how it does not seem to co-operate when you really need it to downshift. Thankfully though, I manage to find the most suitable way to get the gearbox to co-operate: utilize the paddle-shifter and release the accelerator (like you would in a manual transmission) while swapping gears. Not as seamless, but still waaaaay better than leaving it to run on its own. 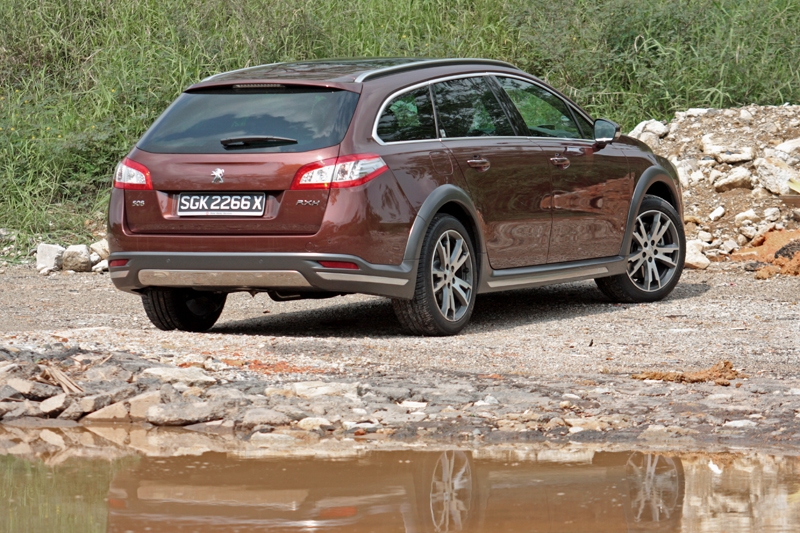 For a car this tall, the 508 RXH does handle well. It is not the sharpest tool in the shed, but steering feel and response is positive and along the North-South Highway, it definitely is planted. Body movement is predictable, but when negotiating tighter corners it may get a little uneasy for your passengers. The anchors are sharp too - it does not feel overservo’d. 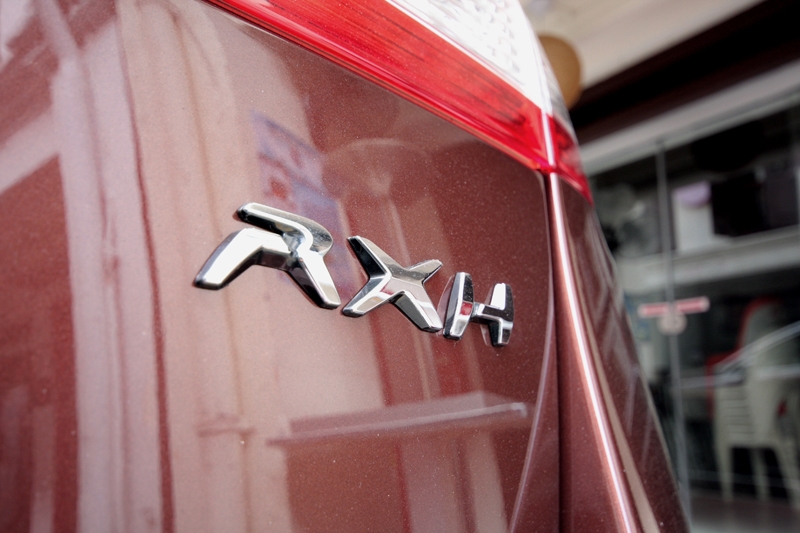 As a whole, the 508 RXH is the automotive equivalent to Rubic’s Cube. You get one side done and then when you attempt to complete the other side, you ruin the one you just got right. This Pug ticks all the right boxes in terms of quality and packaging, top-notch engineering, and everyday usability. You can also go on little adventures off the beaten path up North with this. But when you look at the transmission, it just makes you cast some doubts — definitely not the best money can buy. 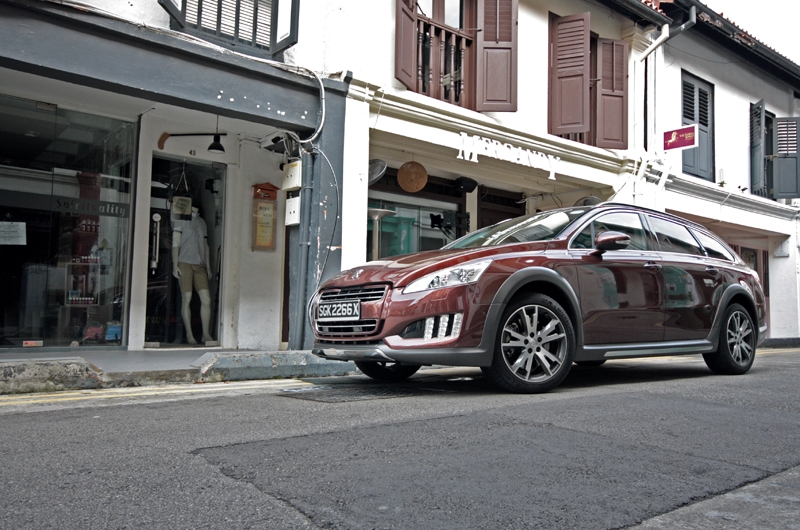 And for the curious, I actually clocked 11.8 km/L over the course of three days; I am sure if I was light-footed we could see a figure of 17-18 km/L - should be good enough for the average driver. 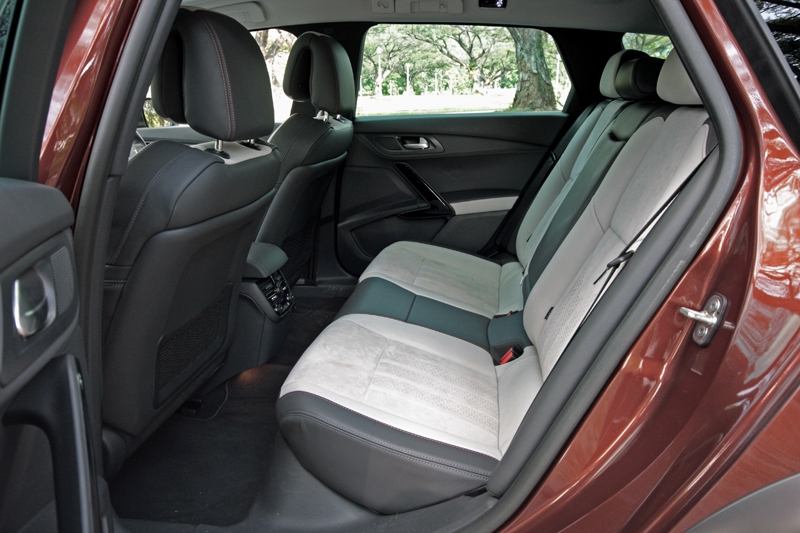