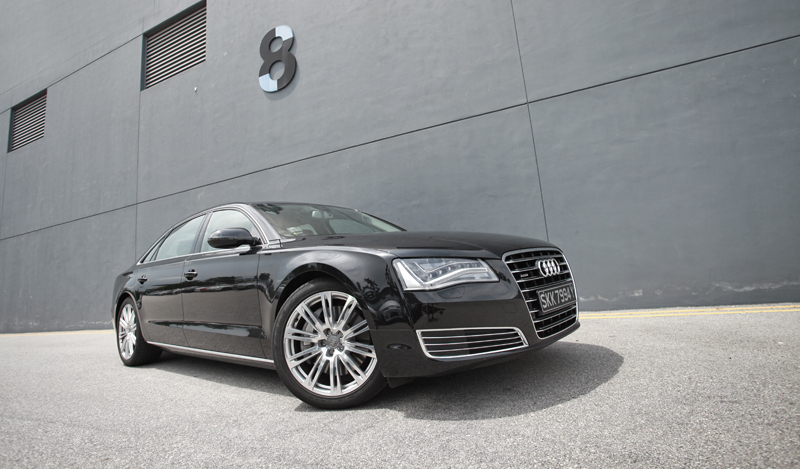 Audi's flagship sedan means business. It may be a little over half a million quid, but at this price, nothing comes close in terms of pace and grace.

I have with me, a car retailing at more than half a million dollars. No, it's not a Porsche. It's not a Bentley either. It's Audi's long wheelbase A8 4.0 TFSI. I know it sounds like a lot of money. But let me throw out some performance specs real quick: 420 bhp. V8. 600 Nm of torque. 0-100 km/h in 4.7 seconds. Not impressed? Well you should be. That's Porsche Panamera S stuff and while the Porsche badge is desirable, I'm not sure it's worth the extra $60,000.

But A8 4.0 isn't just about speed. It's a large luxury sedan class car, and from what we've tested, it does the job convincingly well in that area. However, customers in this category of cars tend to look to Mercedes or a BMW for their luxury 'fix'. But let me set the record straight, the A8 is just as good, if not better than its competitors. Follow me and I'll give you some important reasons why I think so. 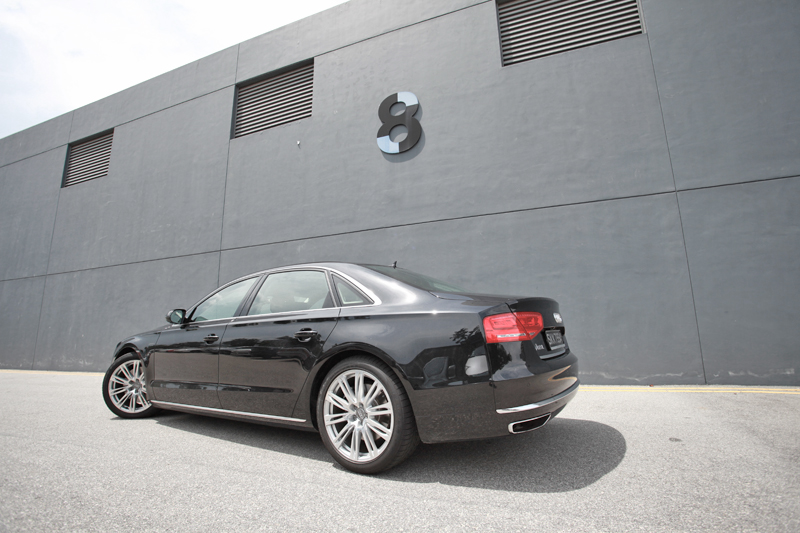 It's technology on wheels. Audi has always taken much pride in being technologically ahead of the competition. The A8 is proud to be one such example. As the first mass-market car with an aluminum chassis, all A8 models have utilised this light weight construction for years. Marketed as Audi Space Frame (ASF), 2013 marks the 20th anniversary of this technology. This, plus the fact that it features cylinder deactivation tech (as seen on Bentleys) and full LED lighting in and out of the car, sets it apart from its closest rival, the BMW 750i. 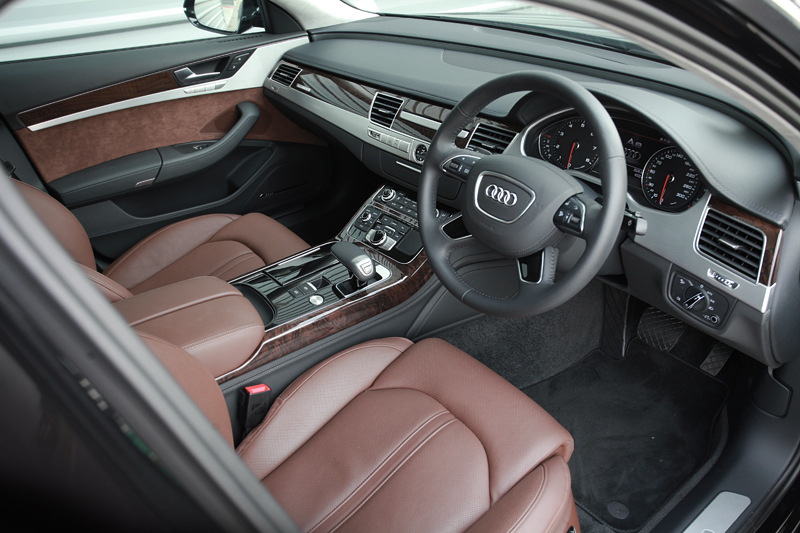 It's dressed to the nines. Well on the inside at least. The A8's exterior is rather conservative, I have to admit. But that said, it does have a clean and chiseled overall appearance, and the new DRLs ensure it's got a rather distinctive face. In fact, the car surprisingly drew quite a few stares during the time it was in my hands. It is deceptively long (and therefore rather grand looking) too. 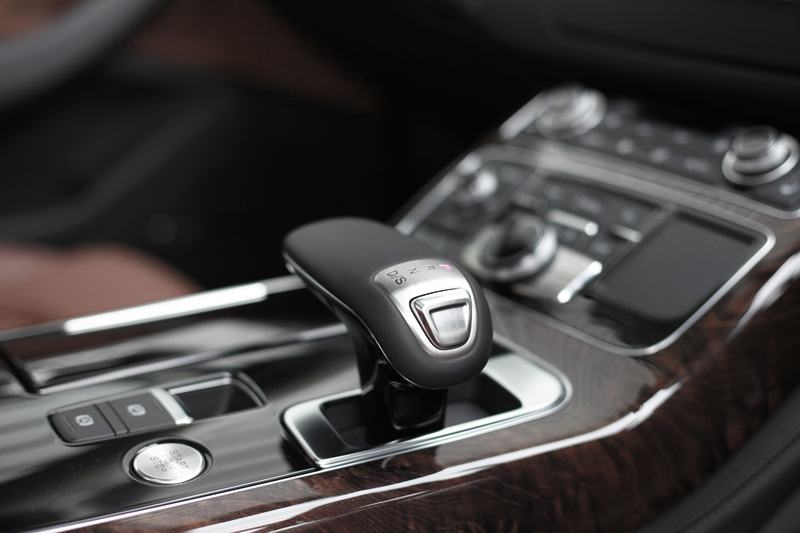 But it's the inside that exudes the most style - without being over the top. I'd much prefer a clean black or silver trimming instead of the wood panels, but our test car was well-matched with brown suede panels and lavished with leather everywhere. The buttons on the horizontal silver centre console feel a little plasticky though. I'd imagine Audis to have solid and tight-fitting buttons, but these rattle when you make contact with them. Other than that, it's the usual robust and sturdy stuff. 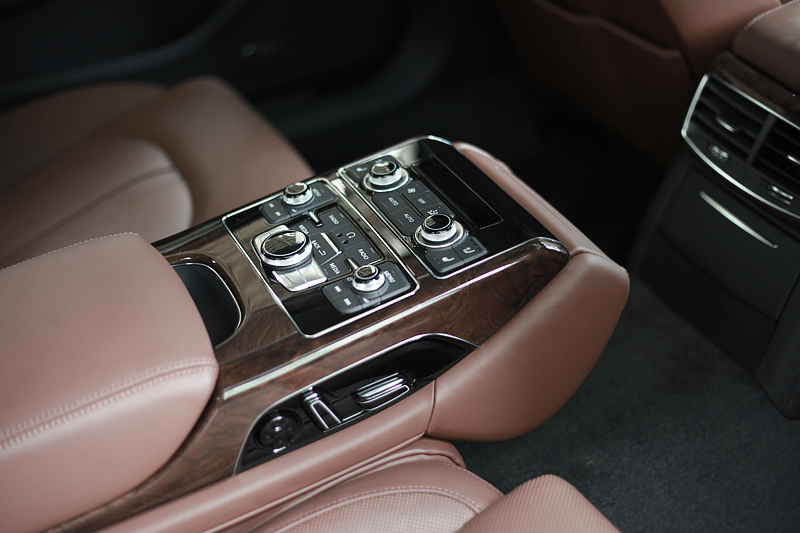 It's really quiet. Active Noise Cancellation technology utilizes microphones to record overall interior noise patterns, and then emits an opposing sound through the loudspeakers to cancel out original noise. In addition to that, there's Active Engine Mount. This feature uses sensors to detect vibrations, and simulates counter-vibrations until they fall to an undetectable level. Then there's the ceiling-mounted lights that produce a soft illumination as you drive at night. When you switch the cabin lights, they glow brighter and create a feeling like you're in a cozy hotel room. Nice. 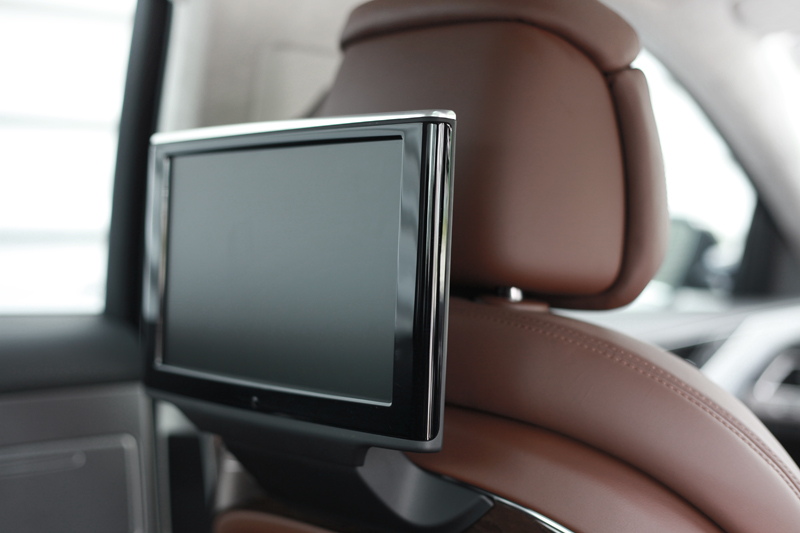 It's oh-so quick! Yes, the A8 is not simply about speed, but yet it does FAST so phenomenally well. It is almost impossible to drive this car slow. A regular tap on the throttle will send the car charging towards the horizon, and it will require a lot of will power (and effort) to drive this car gingerly. The A8 may be a car that some wealthy individuals might choose to be chauffeured in, but that'd be a waste. Because for a large car, this luxury barge is rather good to drive. The 420 bhp 4.0-litre turbocharged V8 may be a detuned version of the 520 bhp unit found in the new S8, but it sure feels like it's pushing out more juice than that. 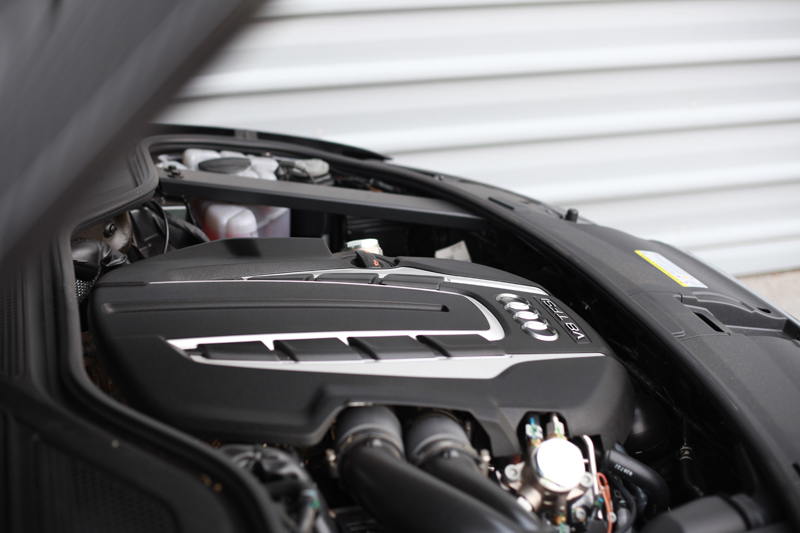 A charge to 100 km/h takes 4.7 seconds, and it will keep pulling all the way to 250 km/h in no time. It stays firmly grounded too, the Quattro system working with the 20-inch wheels to keep the huge car planted even in the wet. Like Audi's recent marketing campaign says, Singapore is indeed the 'Land of Quattro', especially during this wet year-end season, and Audi's 4-wheel drive system proved itself more than capable as it confidently held the line as we chucked the A8L into a series of corners. The adaptive suspension and speed sensitive steering also help to sharpen up the reactions of the car when in high speed, allowing confidence even when executing 'Transporter'-like antics. 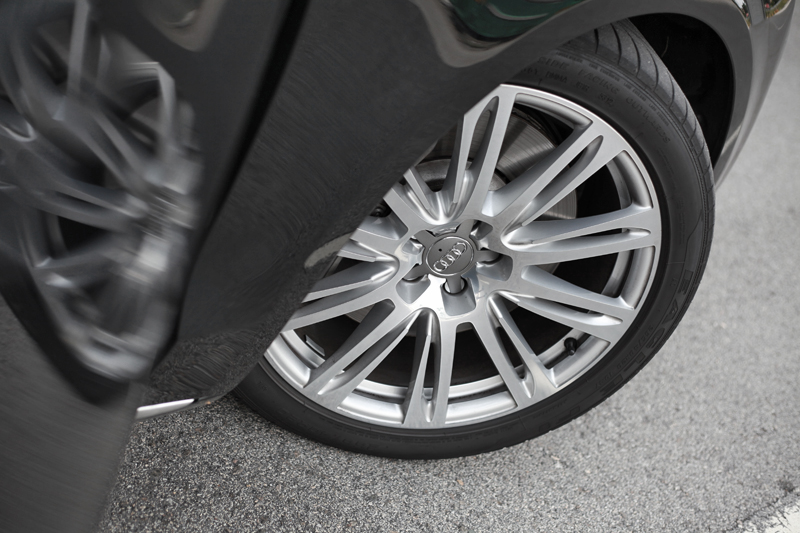 So yes, the A8L was impressive from the time I picked it up till the moment I gave it back. If i had to really find fault with it, I'd say that an option to turn up the volume on the V8 would be nice, but I guess that's reserved for the S8. Come December, Mercedes would have launched the new S-Class, which will definitely draw the attention away from cars like the A8. But if you're well-to-do, you'd do well to take a look at the Audi A8L 4.0 TFSI, its talents may be hidden under that subtle appearance, but that just makes them all the more interesting to uncover. 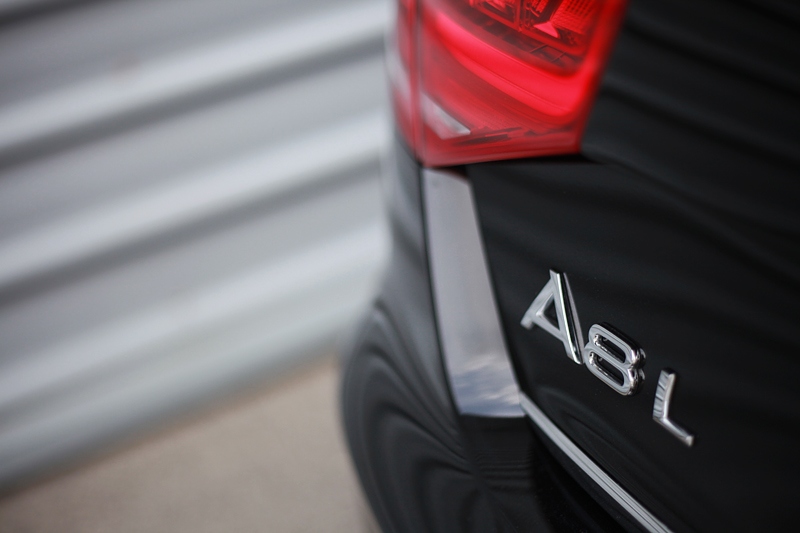 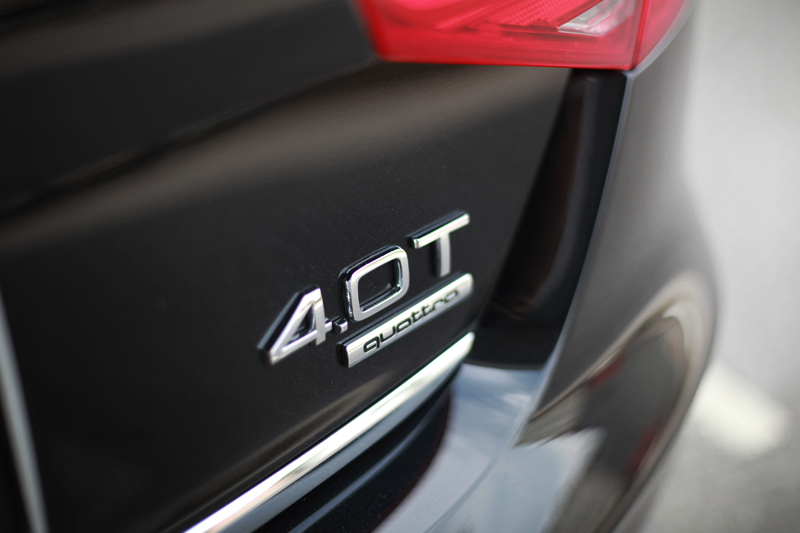 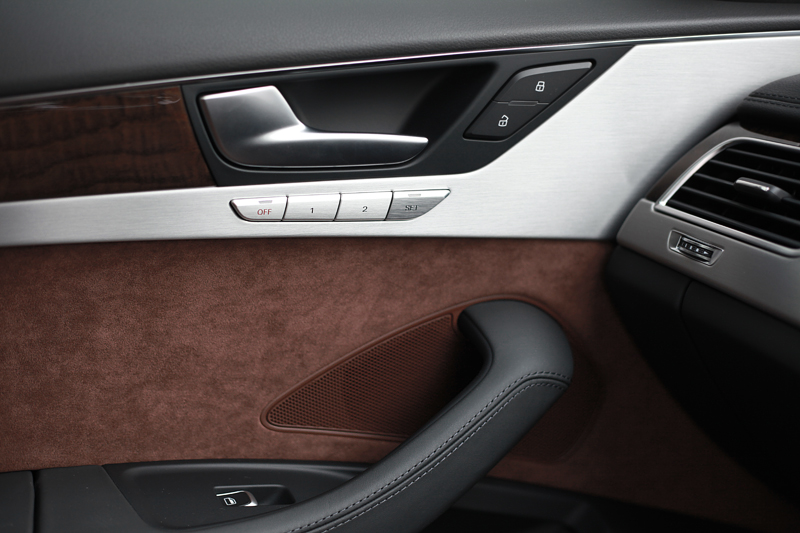 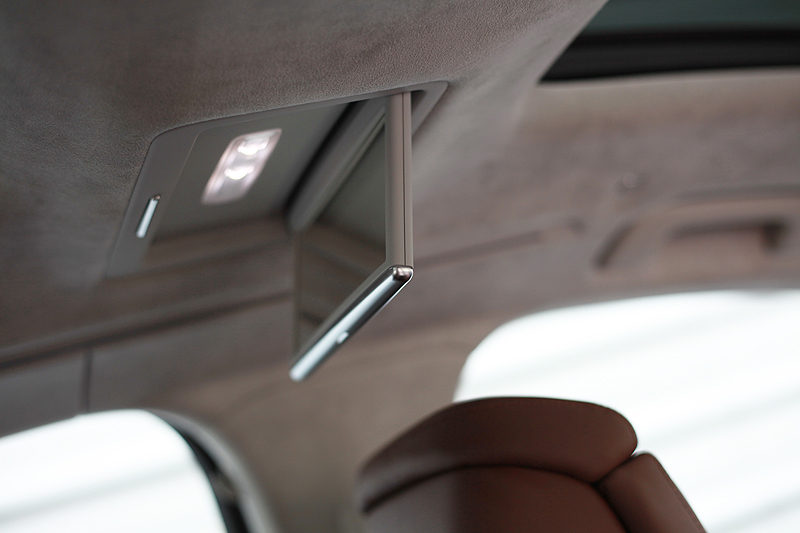 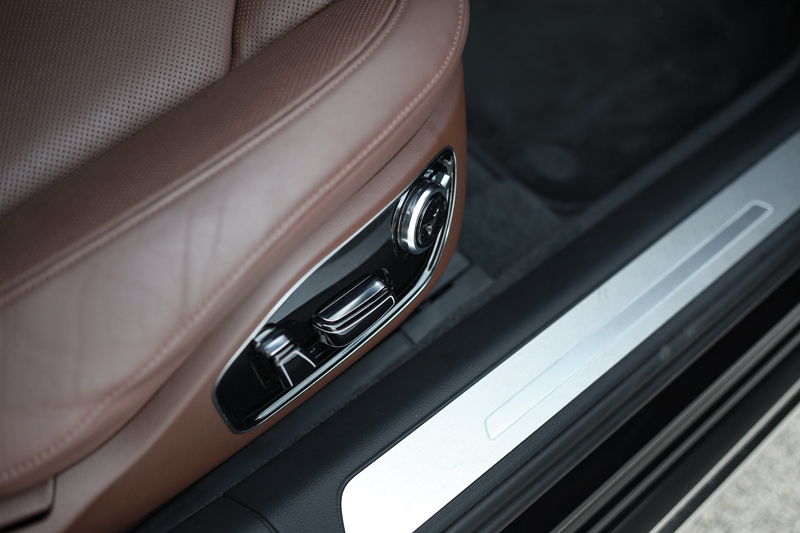 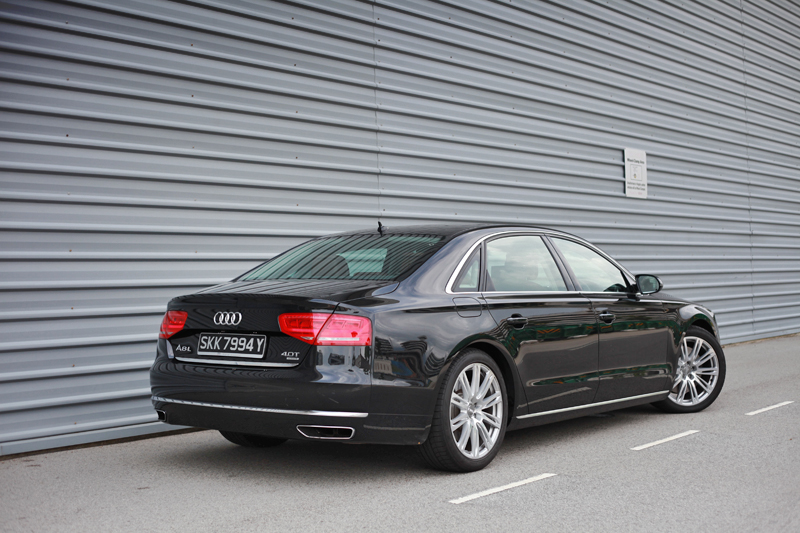 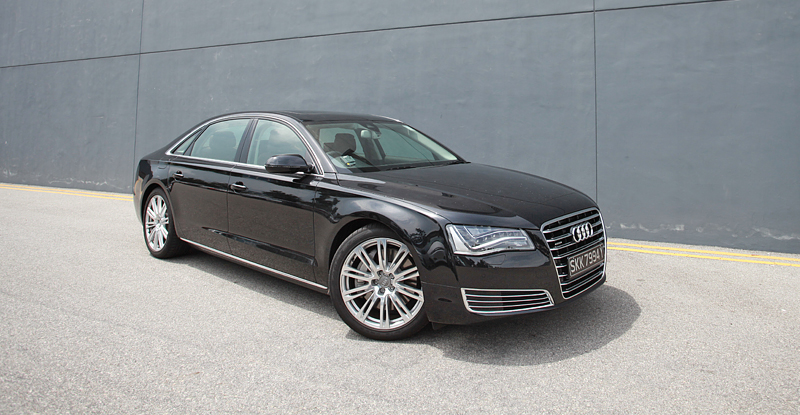