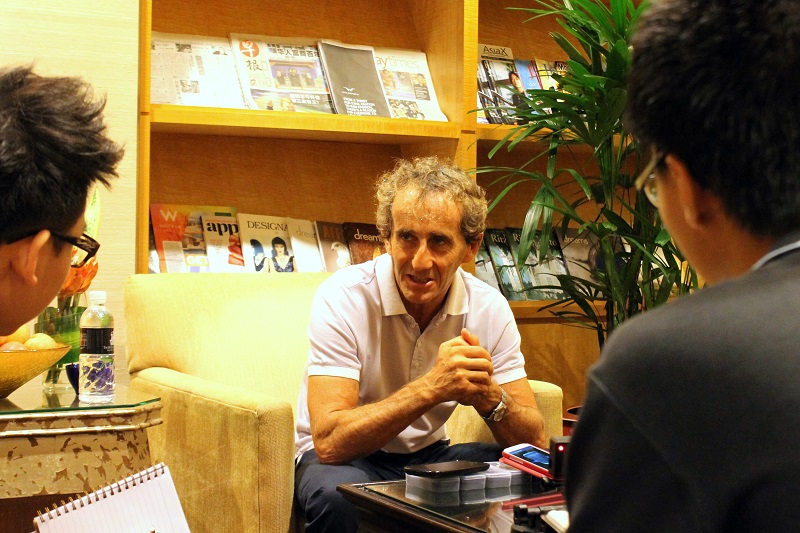 A Meeting With The Professor

Racing drivers live and breathe motorsports throughout their careers, but have you ever wondered what happens when they stop?

With four titles to his name, the Frenchman is placed third in winning the most titles as a driver in Formula 1 history. But it’s been 20 years since he was last in an F1 car, so when he was in town recently, we couldn’t miss the chance to find out what life for a racing driver is like when it’s knocked back a couple of gears.

BP: Hi Alain, could you tell us more about what you are up to these days?

Alain: I’m working for Renault as a worldwide brand ambassador, and F1 advisor. It’s a combination of bringing more exposure to F1, and playing a big part in next year’s technical challenges, helping with the new engines, turbos and electrical power units.

BP: Successful drivers obviously start out young, and devote almost all their time up to their forties on racing. As a championship-winning driver, what was life like for you when you stopped and retired?

Alain: When you stop, you are lost. You are completely depressed and you don’t know that before. Because there is one thing you realize very quickly, which for me took about three months. You are so tired, you know, mentally tired when you stop at the end of the year, you need to rest a little bit. So for about a month or so I woke up at 10 in the morning, and it was good in the beginning, but very quickly I got bored, I had no project, no target, and I didn’t want my son to see me wake up at 10 o’clock everyday so it became a big problem in my head! But I realised that you cannot do something similar (race competitively), you cannot get back to the same way of living because there is no more fire within you, so you need something different to do. After three months I started working again, doing communications with Renualt as well as working for my old team McLaren. I only stopped three months, more or less, so I was always busy after that, and it took me about six months to a year to get used to it again.

BP: How long was it after your F1 retirement before you got back into another racing car?

Alain: That was 10 years later (in the Andros Ice Racing Trophy). For me it was racing for sure, and quite tough in a way. It was more about the challenge at first, because driving on ice for me was so new that you completely forget everything you’ve learned. When you go on to a normal circuit, you remember everything you’ve done before, but on the ice it was completely different, the same feeling as if I was starting out again in go-karts when I was 16. It was completely new, my style was completely the opposite of what you need on the ice, and that’s why I was very interested. I was completely not suited for it but because of that, I wanted to try and become one of the best on the ice. 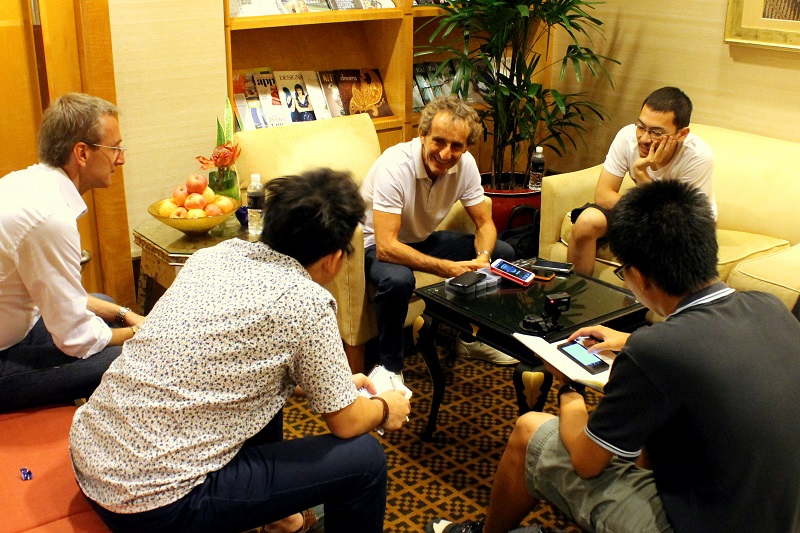 BP: This is something I’ve always been fascinated by ever since I first saw videos of Ice Racing; could you elaborate on the techniques required to get the best out of the machine?

Alain: It’s obviously a completely different way of driving, but also a different way of working and thinking. You have no electronics, everything is mechanical — the 4-wheel drive, 4-wheel steering, sequential gearbox, but you can work a lot on the car: the differentials, the way both the front and rear wheels react, we are changing (the setup) all the time over the different heats because the track is changing all the time. When you start in the morning, it’s going to be different at lunchtime and then the evening, or it could snow and you have a completely different scenario, and that’s what I enjoyed a lot. On a normal racetrack you know what you are going to do the whole weekend, from Friday to Sunday, so it’s a very different job, you know, you have more follow up, and you just need to follow through with the programme, but on the ice, you can predict nothing. 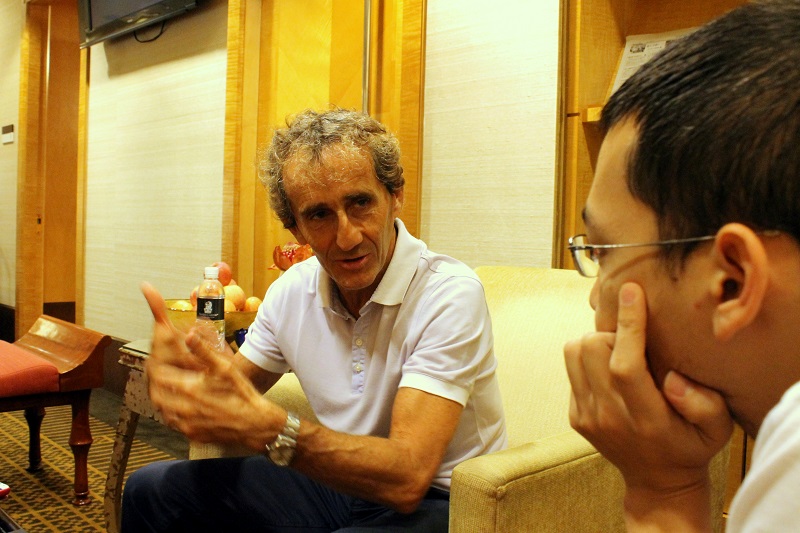 BP: So based on that, did you ever consider trying Rallycross?

Alain: Rallycross? No. No, it’s a different discipline (mimes cars bumping each other). Too much contact, and I don’t like that. (chuckles)

BP: How about normal rallying? Maybe as a wildcard entry with Renaultsport?

Alain: No, I’m too old for that. It’s really quite dangerous and you need to get used to it very quickly when you’re young. But driving on gravel and sliding around is fantastic, especially for me because all the time I try not to slide, so it’s quite fun. 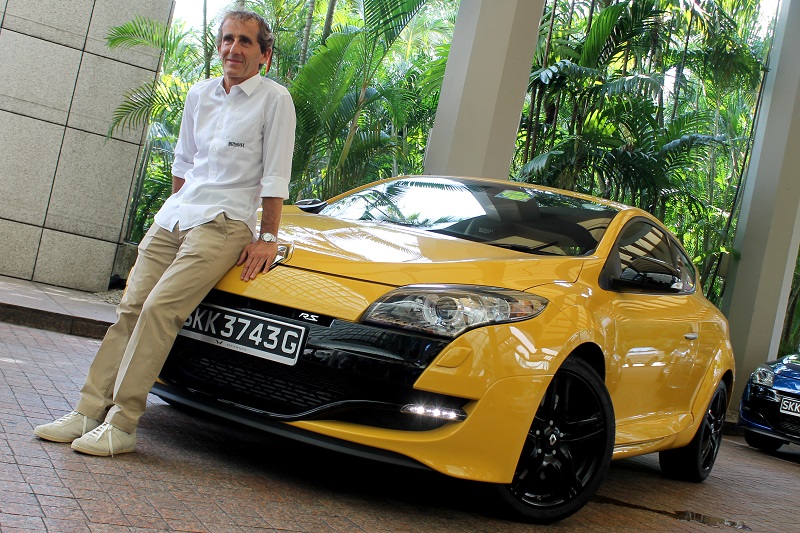 BP: Some people have said that the best racing drivers didn’t pass their driving tests on the first try - Jenson Button for example. How many attempts did you take to obtain your driver’s licence?

Alain: I did the test when I was 18 years old, the normal age at the time, and passed on the first try. (chuckles)

BP: What was your first car, and what’s your preference for your road cars you drive?

Alain: I never liked driving sports cars. When you’re driving in Formula 1 you want something a little more comfortable. The first car I bought was an Opel Kadett GT/E, which was a rally car. Unfortunately, that was the only car I had an accident with. I was going quite slow to be honest, but it was on gravel, and my friend and I ended up going 30m down the (side of a) hill. I’d only had the car three weeks, so that was quite a bad experience!

BP: I understand that your son is currently a test driver for Lotus. How is he going with that? With Kimi moving to Ferrari, might there be a spot for him next year?

Alain: It is never impossible, because he has done a good job in the last two years, and spent a lot of time on the simulator. But being a development driver, he is very focused, and it is a different way of working and it is very good for the team. Being a race driver is going to be another different thing, with qualifying one lap or doing the start, (or) even if he races in endurance or other types of races. So it is two different things and I realised it and he knows it himself that it will be difficult for him to be chosen by the team but you never know.

BP: All the best for that!