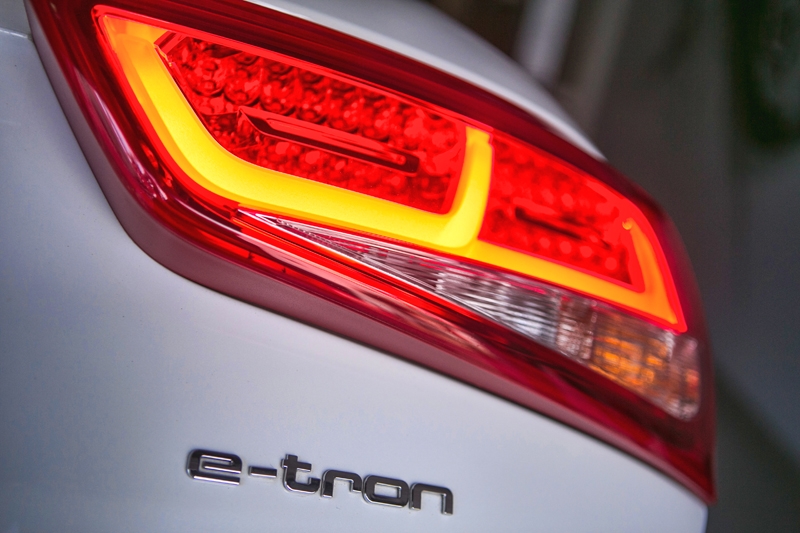 The Electric Co | Audi A1 e-tron

Audi let us briefly sample their innovative electric A1

This electric compact hatchback is one effort by Audi to make such alternative-fuelled cars more accessible to the masses – but with limited range, can it really make drivers bite when it goes into full production?

The whole 'alternative-fuelled cars' fever is pretty much still going on, and if there’s one car company that you have to thank for it all, well, it has to be Toyota. They may not be the first to mass-produce hybrid cars, but they definitely did a good job at commercialising this concept and also making it the way forward. 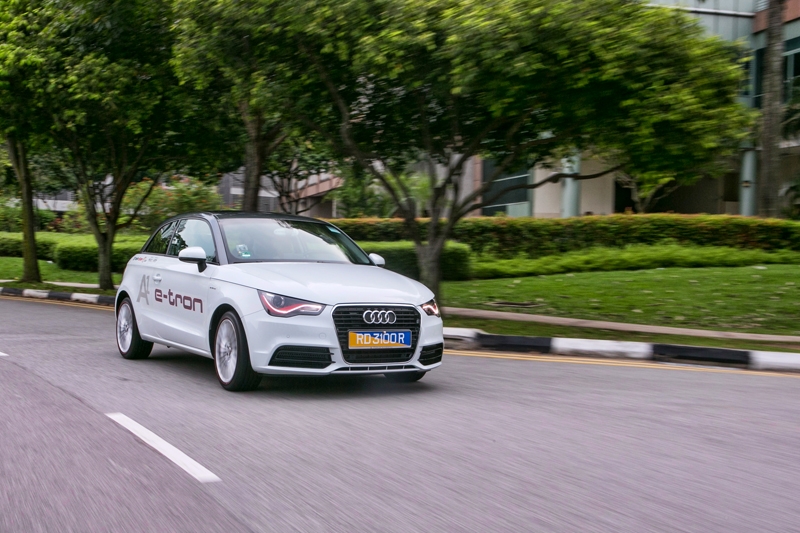 Obviously Toyota isn’t the only company in the business to sell the idea of alternative-fuelled cars. Today we have all the way from Ingolstadt, Audi, with their interpretation of a ‘Mega City Vehicle’: the Audi A1 e-tron. 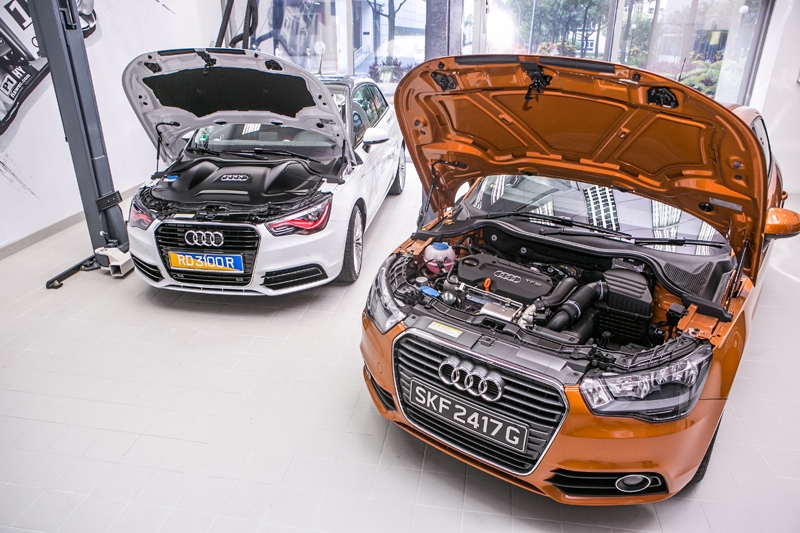 Through research and studies, Audi has concluded that the A1 is the best platform to build an electric car for urban dwellers. After all it’s compact, and it seems like a simple ‘plug-and-play’: Audi took about one and a half years to develop and build this earth-friendly hatchback. 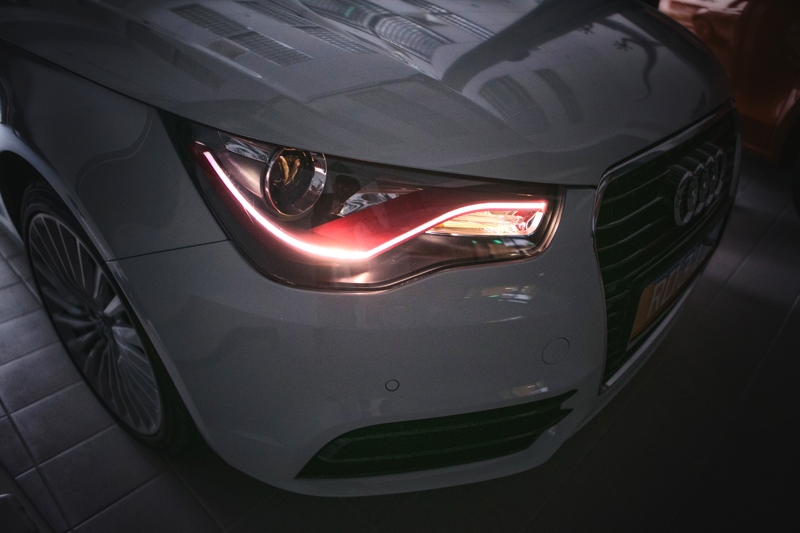 At first glance, the A1 e-tron may come across as the regular A1 — that is until you take a closer look and notice the little touches to differentiate the electric version from the petrol brethren. For a start, there’s the different headlamp — the A1 e-tron gets a stylish red-accented ‘angel wing’ daytime-running light. Next, the bigger alloy wheels — the e-tron comes standard with a set of arch-filling 18-inch rims (whether this will come standard once it goes in to mass production remains to be confirmed). Then when you look at it from the rear, you would surely notice the missing exhaust tailpipe. 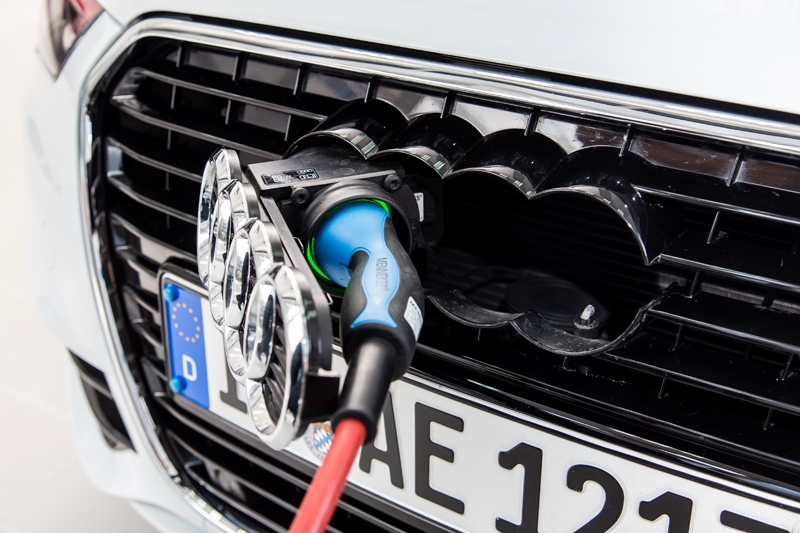 Notice the Audi logo on the front grill? Pop it open and - tadaa - you’ll meet the car’s charging socket. Now here’s an interesting fact: a three and a half hour charge via a 240V socket and fast charge cable is all you need to fully charge the A1 e-tron. 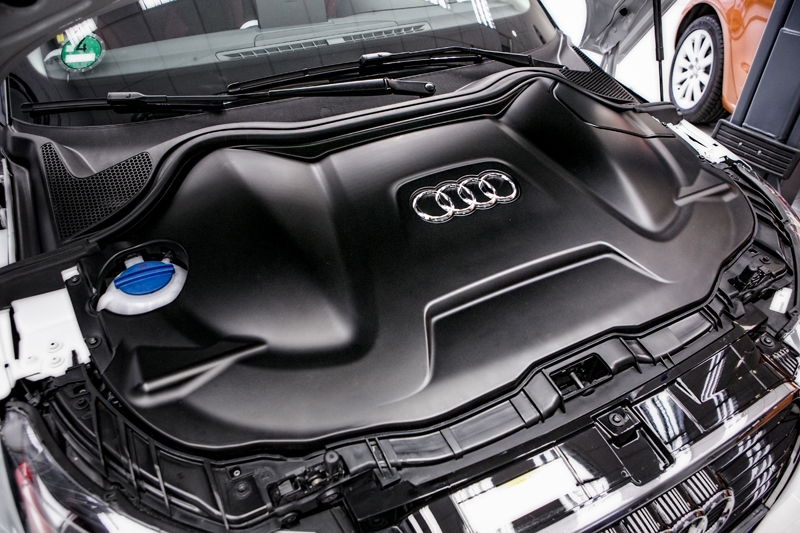 A synchronous electric motor is mounted transversely under the bonnet. Paired to a single-speed transmission (no fancy S-tronic), the A1 e-tron whips out some 61 bhp, with the capability of maxing up to 102 bhp when you do floor the accelerator; such runs however, can only be done within short bursts (to overtake that road-hogging Camry, for example). Importantly, it has all 240 Nm of torque from 0 rpm — put pedal to the metal from standstill and feel the A1 e-tron speed ahead of anyone else. Of course, such juvenile act affects and shortens the car’s range; in full electric mode, this electric mini can travel up to 50 km. 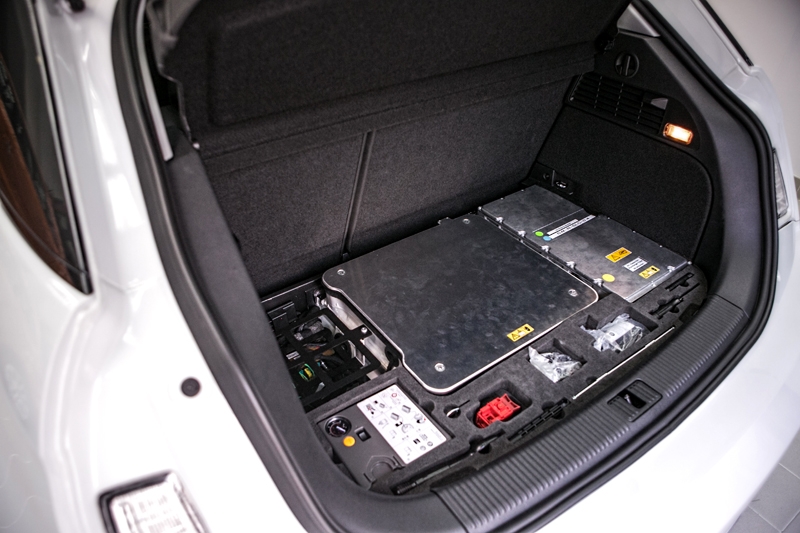 Which is why Audi fitted a 254 cc Wankel engine (aka rotary engine) in the boot. Running on fuel - Audi placed a 12-litre fuel tank at the rear - this engine will then recharge the T-shaped 12 kWh lithium-ion battery (which is placed under the rear seat). Together, the Wankel engine and battery forms the range extender; with assistance from it, the A1 e-tron can travel an additional 200 km — giving a combined 250 km total range. In full electric mode, the A1 e-tron produces zero CO2 emission, while with the range extender running, this number goes up to only 45 g/km. 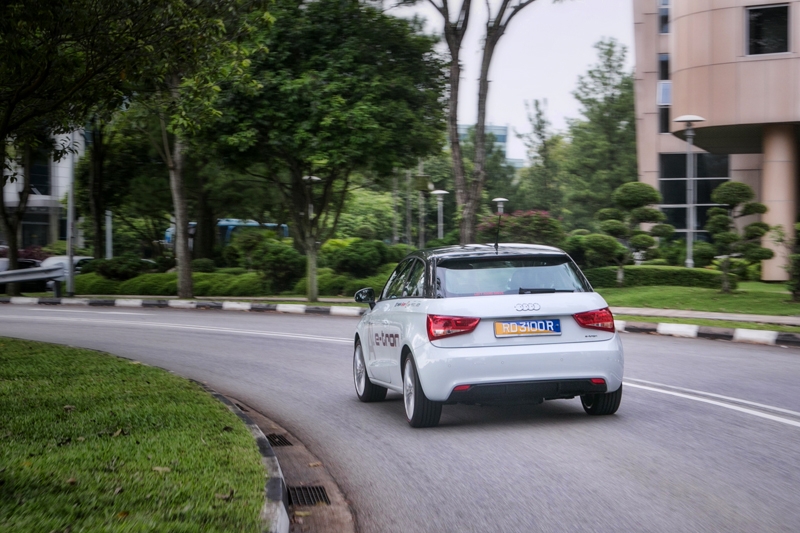 All technicalities aside, the Audi A1 e-tron is surprisingly a hoot to drive. Although limited in range, it springs to life at every mere jab of the accelerator; give it a full stomp and everything else turns blurry. Feels more like a turbocharged hot-hatch than an electric vehicle! 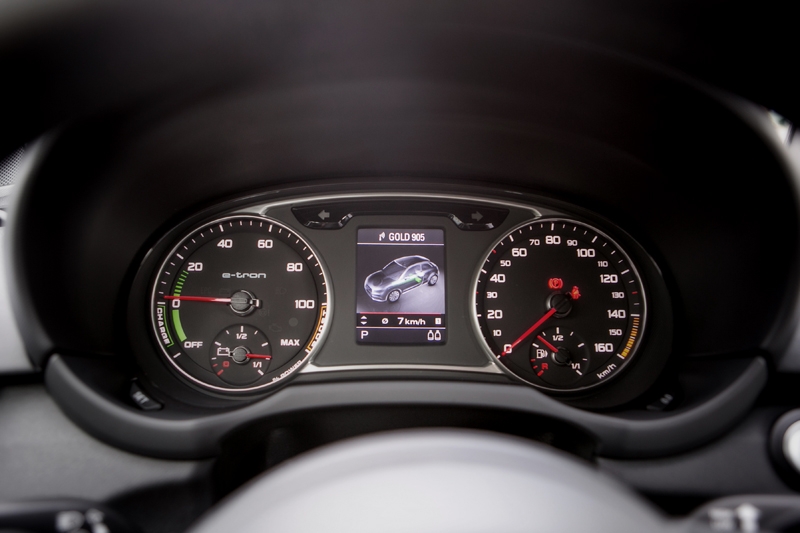 On the downside though, the more of such antics, the faster the A1 e-tron runs out of juice… 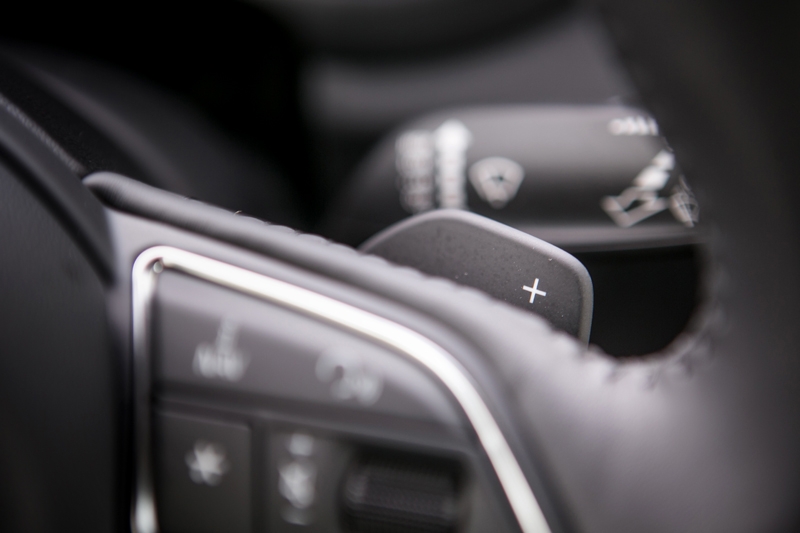 You can still find a pair of ‘+/-‘ paddle-shifters mounted onto the steering wheel too; however in the A1 e-tron, what it does instead of swapping gears is for you to choose the level of resistance for the engine brake. Bring it down all the way to ‘0’ and the car will coast without any resistance; at ‘5’ you will feel the engine brake working extra time. You get the idea. 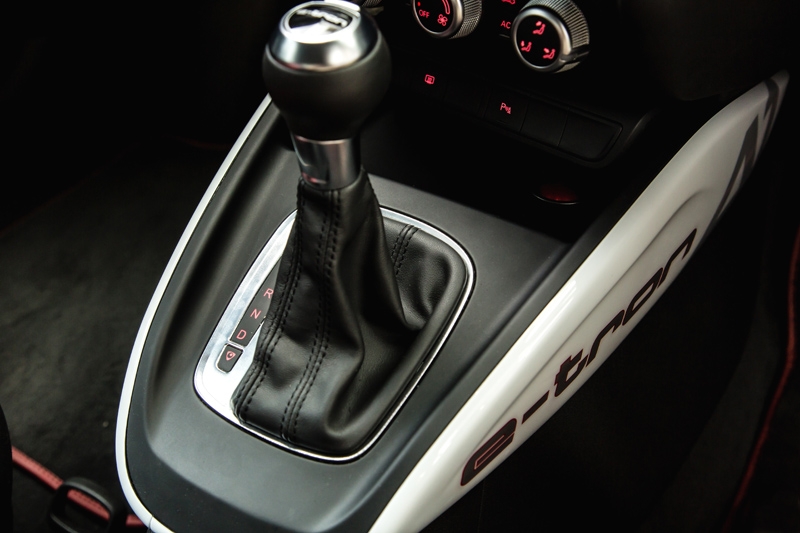 Personally for myself though, ‘3’ is the best, as you don’t feel it intruding your driving. 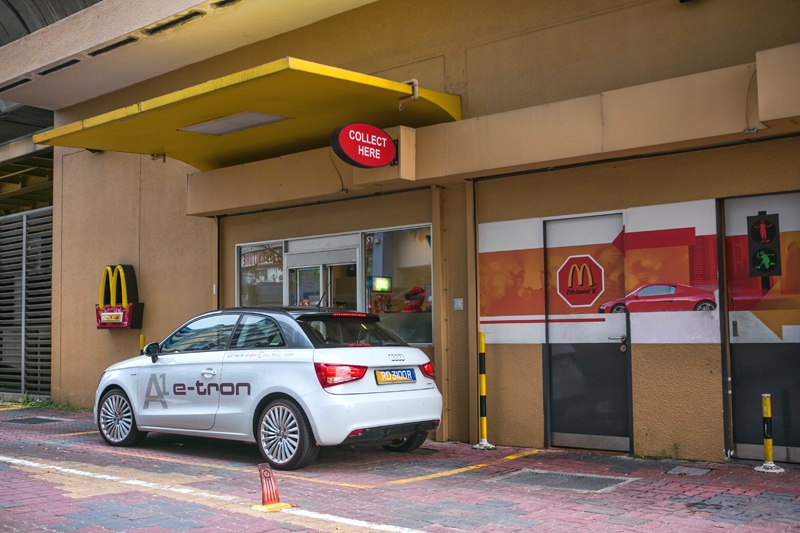 At the end of this test-drive session, it must be said that what Audi has here is a work in progress that in actuality, is all ready for mass-production. Packaging it not much different from the ‘regular’ A1, but with all the technological marvels that is not that hard to fathom, once production begins we could see the next best-selling electric hybrid plying our roads. 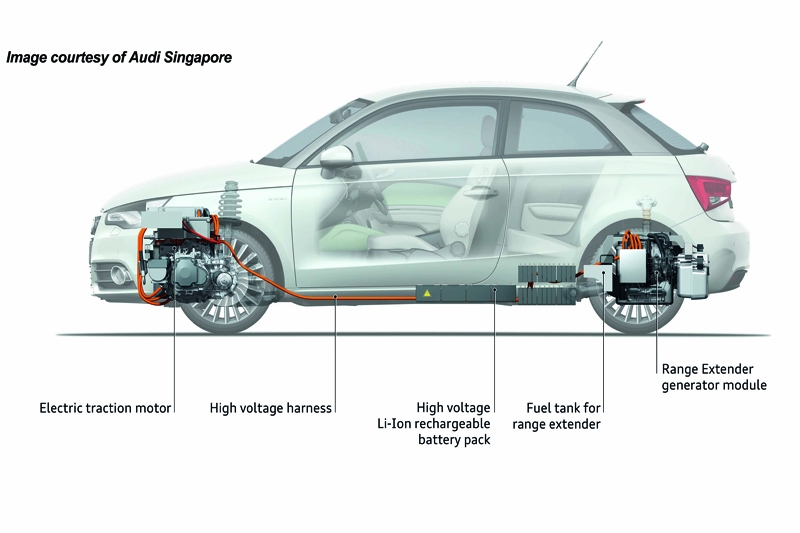 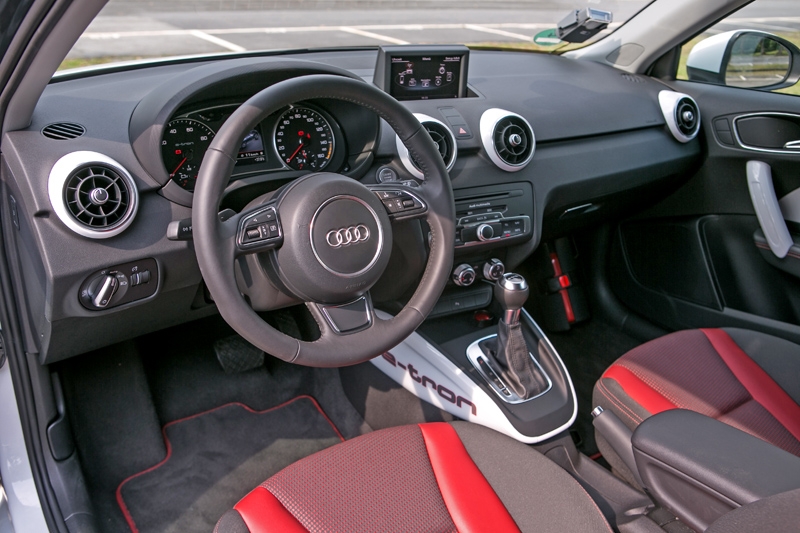